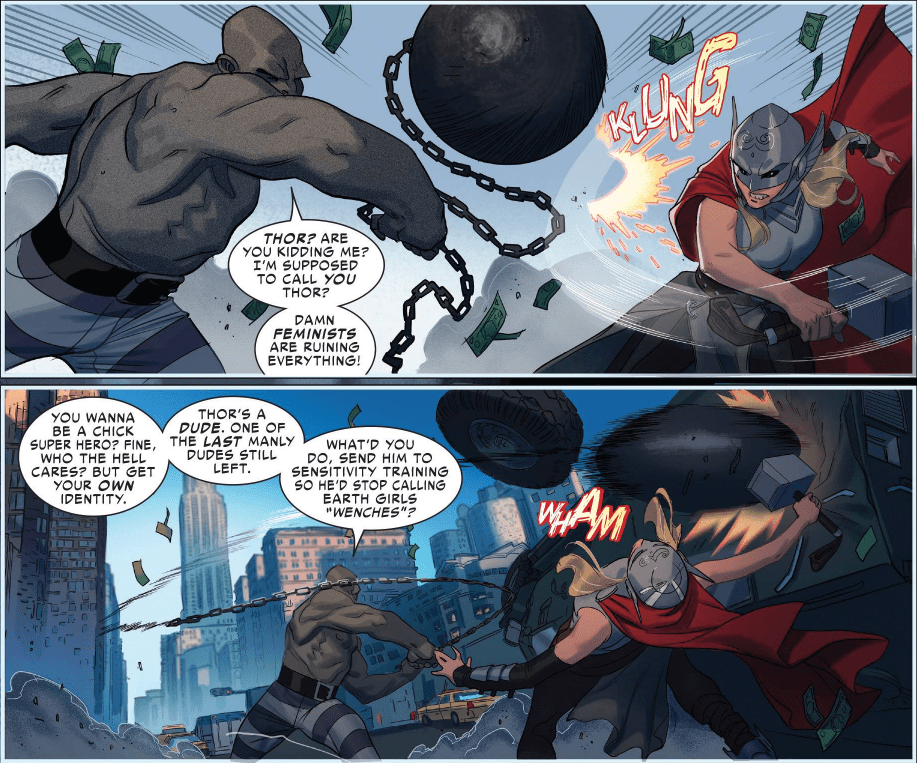 Screen Rant discovered, but didn’t criticize, writer Jason Aaron’s insult to fans he’d similarly performed when he was writing Jane Foster as Thor, here taking the words of overrated actress Brie Larson for promoting her mediocre Captain Marvel movie and putting a variation on them into the pages of his 29th Avengers issue: 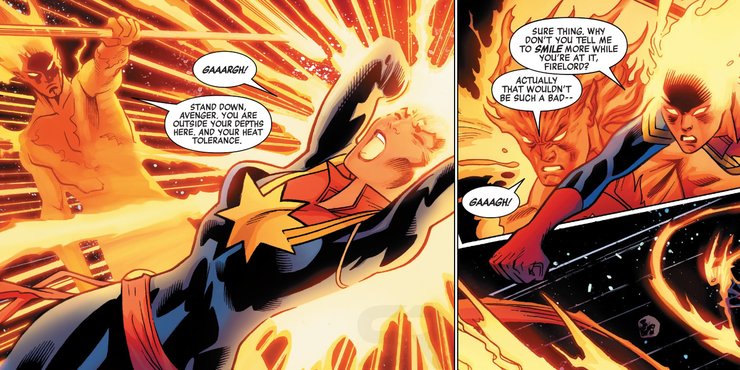 The series from Jason Aaron and Ed McGuinness is currently throwing the Avengers into battle against the Heralds of Galactus, with both sides trying to track down the new (and out of control) Starbrand. Having divided to engage the Heralds, it makes sense for Captain Marvel (in full, flaming binary form) to take on Firelord, the relatively noble-leaning warrior who once served Galactus. But when he gets the upper hand and takes the opportunity to condescend, Carol lets him know that she’s had enough, using some specific language to do it:

The reference won’t be lost on Captain Marvel fans who witnessed star Brie Larson and her character being attacked for seeming too serious, too grim, too bored, not happy enough — and a dozen other forms of what many called out for being synonymous with telling women to “smile more.” In fact, those criticisms were embraced by fans who quickly created ‘smiling’ edits of the MCU’s male heroes, shared by Larson online. While it wasn’t possible for Carol to slam a fist onto the chin of those ‘smile more’ trolls, the comic book version gets the honor. Especially since Captain Marvel smiled more than any MCU hero, in case anyone doubted the double-standard.

Be that as it may, this messaging is not something that should’ve been shoved into the comics any more than the movies. The beef at the time was the way Larson took up what seemed to be a rabid feminist position that one should be mad all the time about everything, and it isn’t helpful. It just adds a lot of needless political posturing to the whole affair, when we thought this was supposed to be entertainment fare, not an agenda, subtle or otherwise.

Cinema Blend also fawned over this entirely unnecessary jab at men who took issue with the way Larson was going the “angry feminist route”, and said:

…The blockbuster starring Oscar-winner Brie Larson was a huge hit among fans as the movie introduced the hero behind the backdrop of Los Angeles in the ‘90s. […]

The movie may have grossed a billion bucks globally, slightly more than the Wonder Woman movie, but that did not necessarily make it a “huge hit among fans.” There were many people who, though they did go to see it, came away disappointed from just how much political correctness was shoved in. Notably, the Russo brothers directing the 4th Avengers movie made little use of Larson in the final edit of the film, where she appeared for not much more than several minutes.

Brie Larson memorably clapped back at her haters by reposting a series of photoshopped images of male MCU heroes with shiny smiles on their faces instead of brooding stares such as hers. It made a great point about the double standards often brought upon women to always look happy and therefore more attractive.

Gee, I wonder why they don’t think that’s an awfully negative trait to frown for the sake of frowning? Let’s be clear: of course I don’t think it’s good for men to frown and be angry at all times. But if not, then women shouldn’t have to either. Larson was just trying to dodge criticism of her PC positions, and I didn’t like how she used words like “dude” in her critiques either.

The “smile more” line was also part of the Captain Marvel movie itself in a scene where Carol Danvers comes across a stranger who lays the comments on her before she nabs his motorcycle for her escape.

So they’re normalizing the notion all men who try to befriend a woman are “toxic”. And no clear mention of how the scene in the CM film was actually longer before, showing Larson electrocuting the motorcyclist and demanding his gear before heading off with stolen goods. If the scene were kept in its fuller form, the movie probably would’ve done less well. The filmmakers must’ve dropped it because they realized it could give detractors ammunition, and even film critics would’ve been hard pressed to ignore it.

The numbers certainly showed those trolls because Captain Marvel was the fifth-highest grossing movie of 2019. The movie made $1.128 billion worldwide and audiences gave the film an A grade on CinemaScore. The movie led right into Avengers: Endgame, which would also feature Brie Larson’s Carol Danvers – and it became the biggest movie of all time!

But, someone actually edited the footage to leave out many of the women in the movie. Looks like there’s still an uneven mindset out there concerning male and female dynamics.

Umm, that’s pretty ambiguous, I’m afraid. There may have been more footage of Larson, but that’s what was certainly left out. You could argue this just a case of a movie that makes big bucks, but doesn’t please everybody because of the divisive elements in the script. Who cares what some disgruntled fan with too much time on their hands does with video editing software?

Jason Aaron’s injection of jabs at anybody he doesn’t agree with regarding meritocracies only suggests he’s another lecturing male feminist, which is not a very good position to take up.