First, they canceled an Avengers special that was to be done in partnership with defense technology firm Northrop Grumman:

Just hours after announcing it on Friday, Marvel Comics has canceled a planned project with defense manufacturer Northrop Grumman. The tie-in was to include an Avengers comic featuring heroes using Northrop Grumman technology and, according to Marvel, was intended to promote aerospace technology and STEM education.

Critics, however, were swift and brutal in pointing out that Marvel’s corporate identity largely hinges on painting manufacturers like Northrop as war profiteers and villains. In the 2008 film Iron Man, industrialist and superhero Tony Stark resolves to stop manufacturing weapons of war after seeing their destructive power in action. That movie launched what is now known as the Marvel Cinematic Universe, which has generated more than $12 billion in box office returns to date.

And I guess this is the reason why:

By 11 a.m. E.T. on Friday, Twitter users hinted that they would organize a protest of the Comic Con event announcing the partnership. 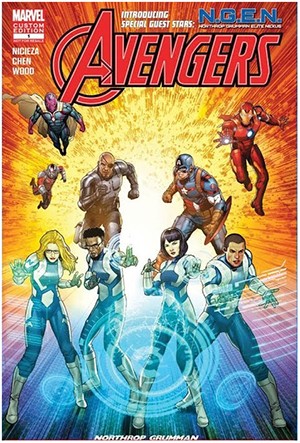 Even if they didn’t intend to act violently about it, Marvel’s capitulation is honestly a disgrace. But if they really can’t stand firm against these kind of protests, why waste so much money on all sorts of products they won’t defend? However, they may have hinted at what could be wrong with the Iron Man movie from nearly a decade ago. Which was otherwise different from what was established in the Bronze Age, when Tony wanted to stop working in arms manufacturing because he didn’t want his weapons being used to prolong wars instead of end them.

And a little earlier, they canceled panels and ads for their upcoming Punisher TV program on Netflix at the NYCC and at a Paris convention because of the Las Vegas bloodbath:

Marvel Comics is removing panels and advertisements for its Netflix series The Punisher from events such as New York’s Comic-Con, following the shooting at the Route 91 Harvest country music festival in Las Vegas Sunday night that left at least 59 people dead and more than 500 injured.

This is also ludicrous in its own way, given that a lot of the villains the Punisher’s gone after in the past were the ones doling out mass gun violence, and the Punisher dedicated his life to going after them to avenge the victims, his own family having been some of the first after they were killed by mobsters, as was originally established in the Bronze Age when he debuted. That’s another example of SJW Marvel’s inability to take strong stands anymore.

If anything, it’s certainly in sharp contrast to the time they got rid of Mary Jane Watson as Spider-Man’s wife, and on that they vehemently stand firm, yet when a project comes along involving a defense company, that they’re willing to cave on. It goes without saying the SJWs who led to this latest catastrophe obviously don’t have a care in the world about Mary Jane, or they’d be protesting her marginalization instead, and just vote with their wallets not to buy the Northrop-Avengers special.