Gizmodo presented an excerpt from a new book on Spider-Man history, where Mark Millar explained what happened as they were publishing the first Civil War crossover back in 2006:

A hero’s secret identity is one of the most enduring tropes of superheroic fiction—but there are perhaps few today for who it matters the most than Peter Parker, a character who’s duality has become one of his defining traits. So for him to reveal that in Civil War was a major deal…but a new book reveals that actually, that might not be the case.

Coming this fall from Insight Comics, Spider-Man: From Amazing to Spectacular: The Definitive Comic Art Collection lifts the lid on nearly sixty years of Spidey’s history as one of the most beloved superheroes ever made. Penned by ScreenCrush editor-in-chief Matt Singer, the book gathers not just iconic art from some of Spider-Man’s most influential artists—from Sara Pichelli to Mark Bagley, from Steve Ditko to both John Romita Sr. and his son, John Romita Jr.—but features new interviews with the creative teams that have come to shape Peter’s amazing, spectacular, sensational, and ultimate career.

Well, the series hasn’t earned any of those positive words for two decades now, because political correctness ruined everything. It was either at the time of the “Final Chapter” in 1998 that everything began going to pot, though probably far more so when Mary Jane was put in limbo at the time the 2nd volume of ASM and Peter Parker: Spider-Man were launched, and when she turned up again, hostage of a madman with psychokinetic powers, it was all such a cop-out. J. Michael Straczynski’s run on Spidey was very weak, and not just because editorial mandates were so obviously lurking around the corner, but also because his politics – which seeped into the book – were alienating, as some of the continuity glitches were certainly disappointing. 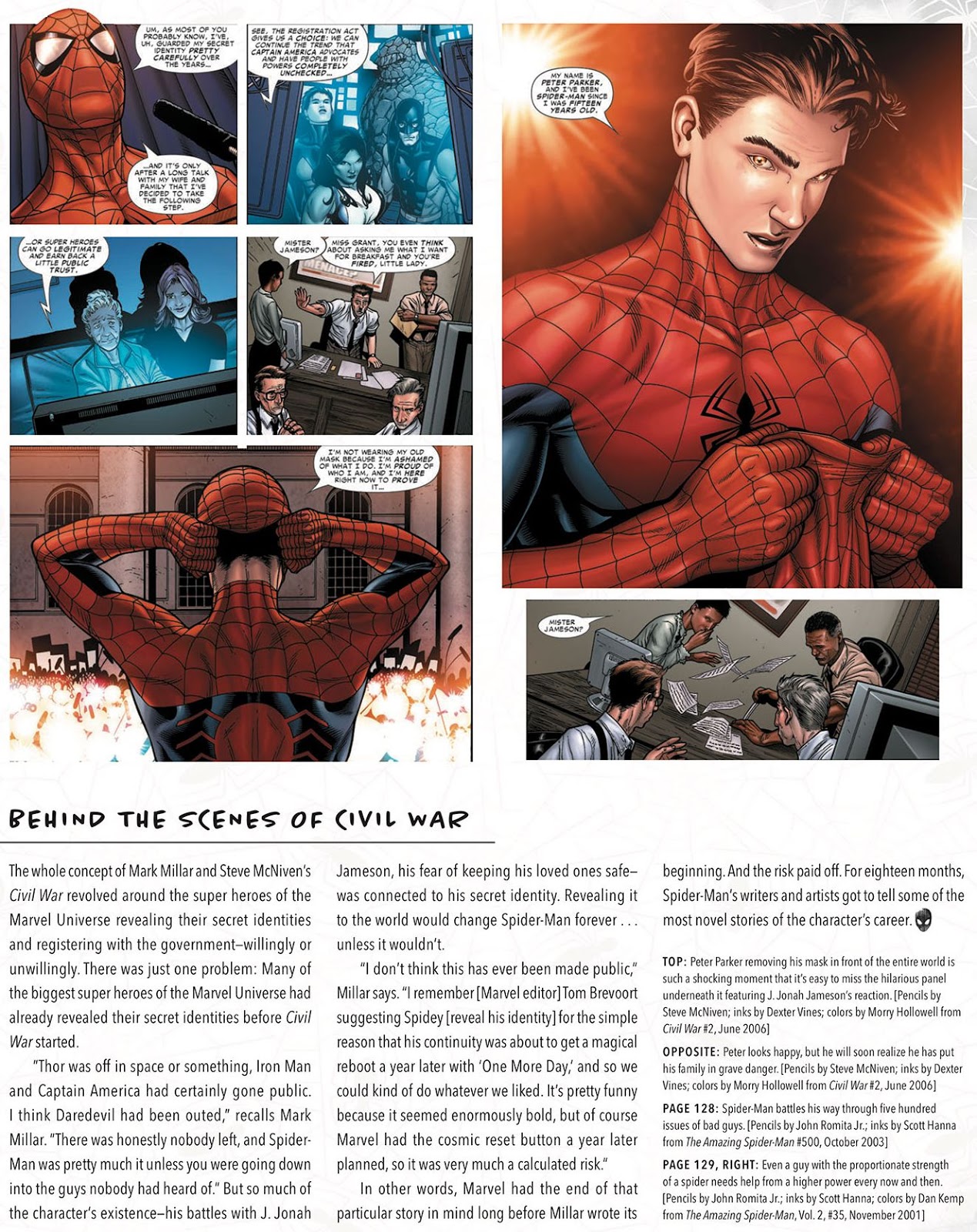 The more interesting reveal comes from Singer’s interview with Civil War scribe Mark Millar in the spread below, who reveals a much more controversial reason as to why the event exposed Peter’s tightly-kept secret on a scale never seen before in his history:

Here’s the quote from Millar:

I don’t think this has ever been made public. I remember [Marvel editor] Tom Brevoort suggesting Spidey [reveal his identity] for the simple reason that his continuity was about to get a magical reboot a year later with One More Day, and so we could kind of do whatever we liked. It’s pretty funny because it seemed enormously bold, but of course Marvel had the cosmic reset button a year later planned, so it was every much a calculated risk.

Yes—one of the most dramatic moments in Peter Parker’s history only came about because Marvel knew it was about to hit a reset button a year and a half later. That would come in the form of the still-controversial One More Day storyline, which saw Peter sacrifice his marriage to Mary Jane to not only put his identity back into the realm of shadows but save the life of his beloved Aunt May. He did it by literally making a deal with the devil, in a plotline that, even if these days has slowly but surely been chipped away at, is still one of the most controversial plot beats in the character’s history.

That’s not even half of it. What came afterwards, whether bright or dark, was done according to editorial mandate and writers who held the same position as Joe Quesada, not the least being Dan Slott. Continuity became non-existent. And along the way, there were several instances where Mary Jane underwent the most startling contempt for her character, including a coverscan that showed Spidey and Black Cat kissing while MJ was standing in the background looking upset; obviously intended to spite even the most dedicated fans of Felicia Hardy. And the way MJ was handled while Dr. Octopus took over Peter’s body was just as despicable. All that thankfully ended in the past year when C.B. Cebulski took over as EIC, but there still remains only so much damage that won’t wash away so easily. 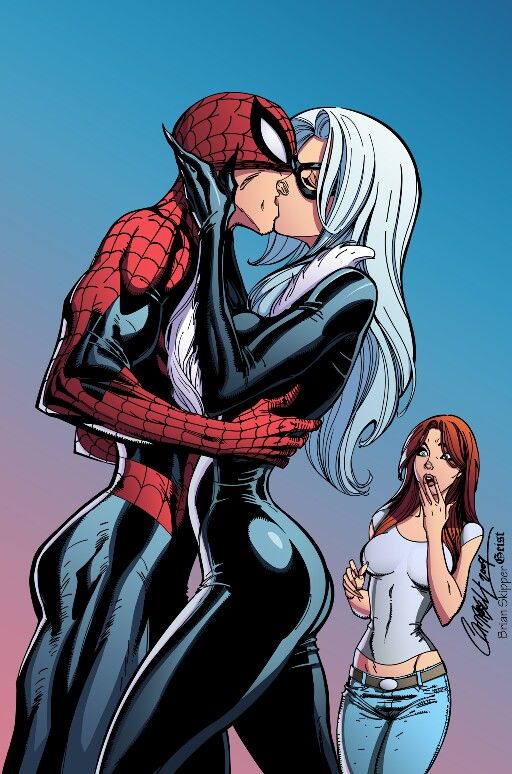 And Millar pretty much revealed he was more or less in on the whole idea if he was willing to do something that wouldn’t stick, yet wasn’t very organic to begin with. I can’t help notice in the picture of the page that the author of the history book doesn’t seem to care, as he describes it as a case of “paying off” and writers finding the chance to tell the “most novel stories” in Spidey history. I guess that means making deals with the devil and switching Peter Parker with Doc Ock to tell a whole “one man’s terrorist is another’s freedom fighter” narrative is not only “novel” but morally acceptable? I hesitate to think what Singer would say if he wrote about Avengers: Disassembled and what DC was publishing around 2004 when Identity Crisis was coughed out. If that’s all Mr. Singer can say about embarrassing moments in comics publishing, then I don’t think I want to read his new book. I’ve seen “neutral” books before, and excuses for steering clear of criticism – all to presumably win the favor of the incumbent publishing staff and their contributors – are unbecoming. A problem cannot be solved if a would-be historian won’t be objective.

It’s been at least a dozen years since Quesada’s awful machinations, which drove away Marvel fans and even casual readers from the market. Now we know this slight to Spidey and Mary Jane was indeed planned well in advance, and the writers in charge at the time were no more opposed to it than the editors. Too bad the historians covering the topics aren’t much better.