Making Comics for a Living is Hard… Don’t Quit Your Day Job!

I think we can all agree on that. But what I can’t understand is why people think that if they do art for a living they will suddenly be “free.” I’ve been around awhile and I have seen a staggering number of people shoot themselves in the foot and end up far worse off because they want to do “comics full time.” The one I hear over and over is “I just don’t want to work retail.”

Yes, working retail sucks, we’ve all been there at one time or another, but comics is not the “get out” card people seem to think it is. When people start asking others for their opinions, I’ve noticed most will just agree and say things like “oh you’re so good, you could do it.” No one is willing to state the truth.  Part of it is because the truth and negativity are often confused as being the same thing. No one wants to be “that person.” The reality is that person is probably being the better friend by watching out for you and telling you the truth and not just what you want to hear. I’ve seen more people get into trouble because they wanted to do something they really weren’t prepared for, and everyone told them only positive things, and the person did it and ended up in a really bad place.

How Hard Could It Be?

For one thing comic book (and all freelance work) is sporadic. Even if you are one of the lucky few that get a paying comics job, it isn’t going to be long term. It’s usually piece work and when it ends you have to move onto another gig, which isn’t always available.

The jobs that are more secure (the ones everyone wants like storyboard artist for (insert company name here) are super difficult to get. If there are 1,000 people out there trying for a comics gig full time (I know it’s higher than that) maybe a couple will get it. The page rates are not good and they aren’t going to improve. Not when there are so many willing to work for peanuts just to “get a break.” And not when there are people in other countries willing to work for low pay because in their country it’s a “good job.” Expect lower pay, not increased security.

A lot of the comics gigs out there don’t pay well.

When you break down the time it takes you to do the job, you are probably getting the same or less as working retail. I once saw someone say something like “for skilled work, like comics art, writers should pay about $20 an hour.” One, that’s not going to happen — especially not for indie projects. And two, of the massive amount of people who think they are good enough, there is a much lower percentage that would be “skilled labor” enough to truly handle the job.

Everyone and their dog wants to do comics. Webcomics have lowered the barrier for entry, but the does not mean that just because you “do comics” you are actually qualified to be paid to “do comics.” I’ve seen amazing artists online — truly gifted people who can’t make it. Those who can’t find full time work making art. Those who are doing comics, but work more than full-time hours for part-time pay.

If you can’t make it working retail, you might want to rethink being a “full time artist.” If you don’t want to work retail find a job in another field and do comics in your spare time until you can find the paying gigs you want.

DO NOT just up and quit and decide “I’m going to be a full time artist” simply because you don’t like your job. It isn’t going to go the way you think it’s going to go. We have friends working freelance in comics, or have book deals, and they stillwork their jobs because it isn’t enough to get by on. And if you have responsibilities like kids or pets, your choice isn’t just about you.

I’ve seen a lot of artists say things like “Well (insert name here) is doing comics full-time so it can be done.”   Or “She was poor and did comics and now she has (insert number) of followers on social media”….and other examples. When you look into it a lot of people doing comics “full-time” aren’t actually making enough money to live on “full-time.” I can’t tell you how many “full-time” people do comics “full-time” but have a spouse or partner who works a good job and that’s paying for them to do comics “full-time.” If you have someone willing to let you go for it while they support you, then by all means do it!

But if you are the one having to support yourself, do NOT fall for this. Research your idols. I know of several off the top of my head that claim they are “full-time” that have spouses that are nurses, teachers, investment bankers, etc. They are technically “full-time” and aren’t lying about that, but it’s a skewedtruth that catches a lot of unsuspecting creatives off guard.

People jump at the idea that they could quit what they hate and be “full-time” artists too.  Just don’t fall for it! Also all “success” on the internet can be faked. Site traffic, social media, crowdfunding — they can all be padded and gamed to appear far more successful than what they are. It really is not hard and it just takes knowing where to spend some money. (And it’s also not hard to figure out who’s faking it if you know what to look for!)

Don’t fall for “success” without knowing what is real and what isn’t. 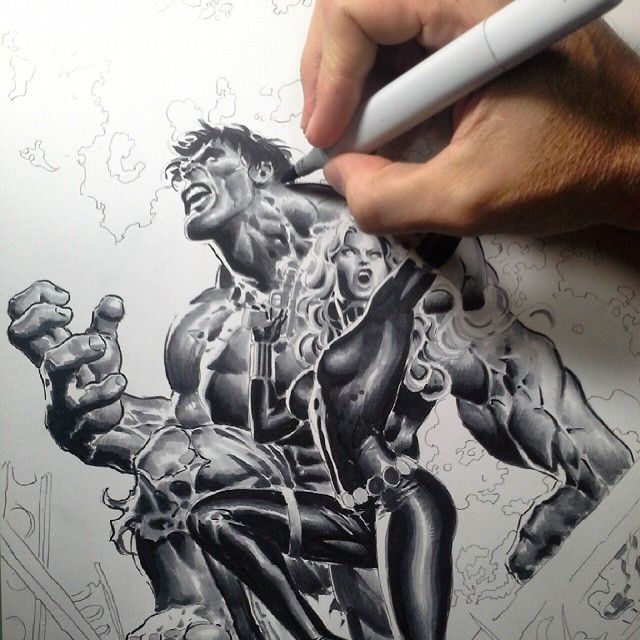 Life is hard and expensive.

Look, the bills don’t go away if you can’t pay them. The way the government is going, it’s just going to get harder for everyone to make a living, not just creatives. Established comics people are writing articles about how they can’t afford health insurance and housing, and other creators rally around them because they are also afraid of ending up like this. There’s been enough of these stories now to indicate a pattern — a long-established one.

So don’t go down that path. Not until you figure out what you need and find a way to make sure you have it. Life is going to throw everything it has at you. Don’t make it easier to get so down you can’t get back up.

My husband and I were people who had to go full-time into freelance to survive. It wasn’t our first choice. Thanks to an unexpected layoff and a lack of job opportunities, we were thrown into it. We had health insurance, good money, and made extra income doing comics. The entire time my husband was laid off we tried to find something else and that’s with paying comics work.

It took working long, long hours to create several streams of income until we finally got ourselves out of that and into a situation where we create for a living. Unfortunately we also got very, very far behind financially and it took yearsto claw our way out of it. Comics work helped, but is NOT our main focus now. It’s too unreliable, and it’s actually the lowest paying thing we do. It is possible to make a full-time living as a comics creative, but I can’t tell you how ridiculously hard it all was and we barely pulled through.

We have a relatively successful online comic and contacts in the industry, which led to being able to pitch TV shows to Hollywood among other things. We have quite a few things in the works and things are finally somewhat stable. Unlike many younger creatives, we also had a mortgage and kids and pets to pay for — and no safety net. I can’t begin to tell you how much energy, opportunity cost, lost time with our kids, and anxiety attacks (that put me in the ER) it  took to get here.

I’m not trying to tell people to not do comics or art. I’m just saying think about it.

Don’t just quit your job or move far away from your support system, because you might get a job in the field. I’m saying be smart about how you do it. Some jobs suck, but having no money at all sucks worse. I guarantee you that for every one of you talking about going “full-time” or getting a job at (insert tv/comics/publishing company name here) there are thousands of others doing the same thing. The comic book industry is in decline, and there aren’t enough paying jobs to accommodate everyone who wants to work in the business. And what few jobs there are don’t pay nearly as well as they used to.

Build up your art career until you can get to a point where you can do this and then, cautiously, think about doing it full-time.

It’s not ALL bad…

If you have a way to survive and go for your dreams, then by all means DO IT! But just make sure you aren’t shooting yourself in the foot.  There are opportunities out there, you just have to have the skill, drive, and imagination to find them. Sure some people get “lucky,” but most of the time it takes years and good planning. Know when you should pull back. Do not put yourself in bad situations that could ruin what you’ve built. Always have a “Plan B.”

Don’t give up, but don’t be foolhardy enough to throw your whole life into stress and turmoil to reach some level of “success” that isn’t really “success” to begin with.

Cross-posted from: d-rezzed.clownfishtv.com
Kambrea Pratt is the co-creator of the webcomic Shadowbinders, and a longtime contributor to various Disney Comics projects.
She can be found on Twitter at @desert_starr_57.