Every single day I still see all over my feed:

“OMG WHY ARE THEY CALLING FOR GAY SPIDER-MAN?!?”

“OMG WHO’S GOING TO WRITE BATMAN NEXT, I HOPE NOT BENDIS!”

The same outrage train used by the same youtubers to perpetuate a click cycle of the exact same stuff they were bitching about 2-3 years ago.

And like a bunch of gamma male chumps, reteweets, likes, comments are off the charts on these posts every time.

But everyone sent MILLIONS in crowdfund money because we needed a good “screw you industry!”, an awareness raising moment, an alternative to all this garbage formed so art can be art again and not just some corporate outrage gimmick aimed at the lowest common denominator.

The thing is, it was done. It exists. We don’t need them anymore.

But instead of championing the new movement and new books, and stuff that’s actually worthy of attention in culture, they keep at this over and over again.

It takes a certain type of loser to still care about what’s being done in current year Spider-Man after Marvel has told them “fuck you we don’t want you as a customer!” on repeat, after they’re seeing what they can do to degenerate the character even further, after there’s vast amounts of alternatives out there.

It’s the gamma male mindset where they have to cling cuz they believe secretly they are so smart and so wonderful that Marvel will HAVE to see and change their ways.

And they keep buying. They keep spreading the outrage marketing that keeps more people buying. They hamper any alternatives from gaining a foothold cuz all that gets talked about is the new bullshit from Disney.

It’s depressing. And it is a difficult thing to break.

But it starts with you. 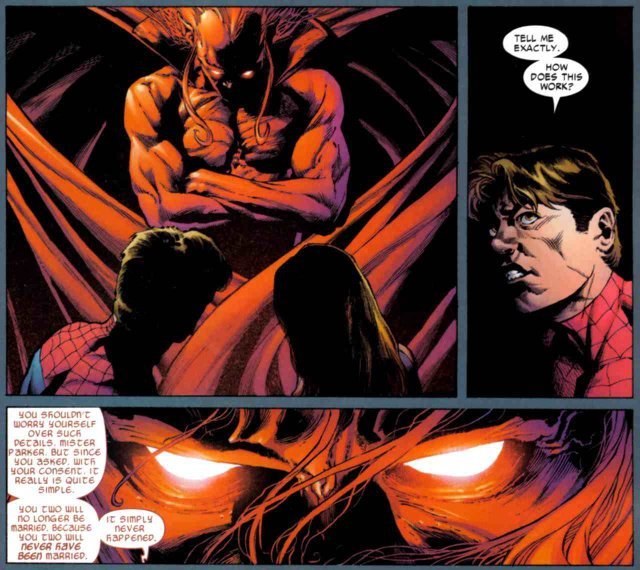 In 2008, when Marvel first showed its true colors by having Spider-Man make a deal with the devil which removes his marriage because the devil said he’d keep his like 80+ year old aunt alive a couple years longer or something if he did…

And then I quit.

And I never looked back. I never bought another issue. I never even looked at news about Spider-Man, In fact, I don’t even go to see the movies because they’re going to follow the same path because they’re created by the same low-life degenerates who hate marriage, hate our civilization and actively try to destroy our culture.

It’s a hard thing to do, I’m not going to lie, but it starts with a mindset shift.

If you focus on these three things every day, you’ll push things further. Even if you do this with only 1/10th of your posts, it’s going to be a start. Get in the habit of doing it. You always see me boosting projects by different creators because I want them to get to the next level. This is why I took an active role in getting Richard Fox’s Ember War made into a comic. I want that storyboard out there so he can get the damn movie he deserves! It’s a great book.

In summary: don’t be a loser, stop caring about fanfic. Care about real art.

Flying Sparks volume 2 is shipping now. I took all my money, invested it in making a business that’s sustainable to where I’m coming out with the equivalent of a comic a month. Why is it necessary to get that speed? Because that’s what the big companies do. You need constant content to get discussion going, to get that circle going so it can sustain itself.

I’ve done it. All you have to do is read a great comic.