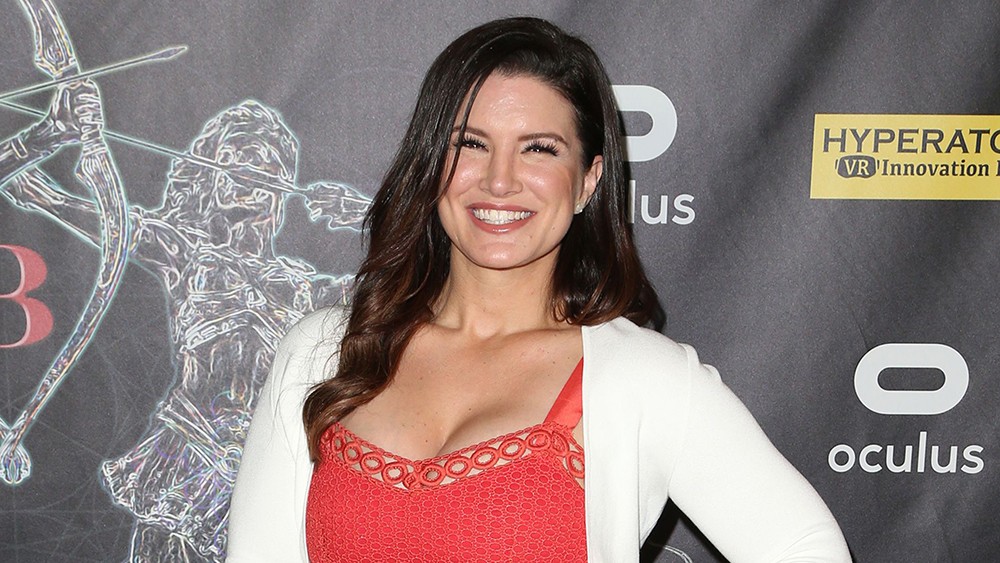 Last month, Gina Carano the lead female star of Disney Plus’s Star Wars spin-off series The Mandalorian came under fire on social media for expressing a contrary opinion to the ever-shifting conventional wisdom about the coronavirus. She was swiftly attacked by bots that may have actually been controlled by Lucasfilm. But a few few weeks later, Carano proved she wasn’t backing down without a fight.

Now several people from podcasters to Lucasfilm writers are joining in the pile-on to shut Gina Carano up for what they consider “wrong think” in regards to putting her “preferred pronouns” in her Twitter bio.

But that wouldn’t be enough for Jordan, as he had plenty of his own stupidity wanting to bubble up to the surface.

And here it seems like only yesterday that imbeciles like Jordan were fucking around and defending an actor over a completely discredited Instagram incident. But apparently, Jordan likes the notion of bullying Gina off her show.

And as with any SJW, Jordan likes to make things up in an effort to make points that don’t exist.

Not one person ever said, “I hate women unless they agree with me.” It’s a quote that Jordan made up in an effort to mischaracterize his political enemies, such as Ethan Van Sciver.

So as the unthinking SJW mob partners with the legacy media in their fight to throw Gina Carano down the same memory hole that they threw Rachel Butera into, let’s all try to remember that ILM Animation Director for The Mandalorian, Hal Hickel, reminded us that Lucasfilm is a company which values free speech:

The writer for Star Wars: Squadron and Battlefront II is very mad. So he uses bold and brave asterisks to hide his tweet from Twitter’s search function so that no one knows about it.

Apparently leaving people alone to use pronouns or not as they please hasn’t occurred to Mitch.

And she certainly doesn’t like it when people shout out their beliefs in the same way that Lucasfilm reprobates consistently do.

Not to worry Shana. Perhaps you can write an article telling Gina to shut up.

Joe Organa does something on twitch.

And apparently, he’s really upset that Gina blocked her.

But as always with SJWs, they view anyone who rightfully rejects their own bullying as the bully.

Because while Joe pretends that he’s never ever tweeted about her, a simple Twitter search proves the exact opposite.

That’s when the foolishness really began…

She recently posted a fundraiser to raise funds for trans…something.

Apparently, the money is going to the Trans Gender Law Center. Now in and of itself, I wouldn’t normally have any problem with this. Even though trans people are already protected under the Constitution and have the exact same rights as everyone else. There’s really no need for different, separate, or special rights for trans people, or anyone else for that matter. But if they want to raise funds, and mature adults want to give funds, have at it.

But the verbiage on the GoFundMe page is…”problematic.”

What’s actually unfortunate, is the very existence of SJW ideology in its entirety, given that it is an expression itself of nothing other than pure ignorance. Because a genuinely enlightened person is happy for people to use pronouns or not as they please, rather than force anyone in a fascist-like manner into creative pronoun usage. Always remember, SJW ideology = pure idiocy, and there’s absolutely no question about that fact whatsoever.

Outright rejecting all of this moronic silliness is of course the only correct course of action.

Allowing people to express themselves however they please is not a part of the fascist SJW agenda.

So not only should forcible “pronoun importance” be arbitrarily dismissed, but it should also be rightfully mocked as well. And I encourage everyone to do that as much as possible for the duration of this silliness.

Thanks to Scott Ryfun for the tip.

Headland may have found a way to return to the headlines.

Some folks have been asking if the attacks on Gina have been orchestrated in order to prop up this fundraising effort. But with millionaire celebrities like (Star Wars writer) Leslye Headland donating to the cause, they should be able to raise a substantial amount.

Apparently, the GoFundMe was created by The Geeky Waffle Network.

The Mandalorian Season Three Sets Its Disney+ Premiere Date
Reviews: Even Ignoring All the Wokeness, Disney's 'Willow' Sucks
Report: Hundreds of Thousands Have Lost Faith in Disney's Star Wars
Comics Writer Peter David Launches GoFundMe for Medical Bills
Ant-Man 3 Adds 'Agents of S.H.I.E.L.D.' Actress to the Cast
Was Disney Caught in the FTX Crypto Scandal & Can Apple Save Them?
Why 'Strange World' is Disney's Biggest Bomb in Years