The Port Charlotte Sun’s published yet another awful Captain Comics column where he recommends a list of books that are built on some some of the worst aspects of today’s comics, especially the ‘politically correct’ elements. He even has the gall to call this an “A-list”.

“2020 Ironheart” #1 (of 2, Marvel Comics, May 20, $3.99, digital only): Ironheart is Riri Williams, a teenage genius who built her own Iron Man armor and took Tony Stark’s place when he was thought dead. One suspects that this character will eventually show up in Marvel movies, where (Spoiler) Tony Stark actually is dead. Here’s a chance to learn who she is, if you don’t know already. 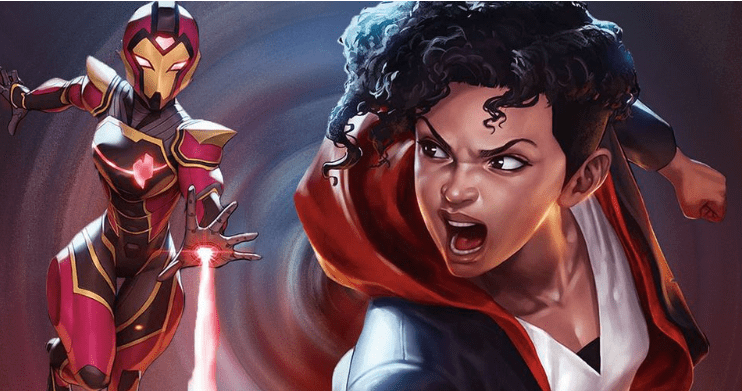 A genius, maybe, but also apparently a campus thief, and originally intended as a social justice replacement for Tony Stark before it became clear the phantom audience Marvel Comics was looking for didn’t exist and/or had no intention of buying, no matter how it was structured. With that learned, what more should be, other than that this is a book not being sold on merit? Maybe that could explain in part why this is only being sold digitally, and even then, nobody need waste their dough on something that’s never been built on merit. Yet it wouldn’t surprise me if Williams does turn up later in the movies, and if Tony’s been knocked off there, they’re handling this mess no better than already seen in the comics.

“Dark Nights: Death Metal” #1 (of 6, June 16, $4.99): A little while back, the former “Batman” team of writer Scott Snyder and artist Greg Capullo created the miniseries “Dark Nights: Metal,” which established a negative, evil multiverse that mirrored the one we know. The Dark Multiverse, ruled by a demon named Barbatos, is where all the stories with bad endings take place. As a result, it’s populated by Jokerized Batmen, fascist Supermen, and bajillions of Earths that look like our worst nightmares. 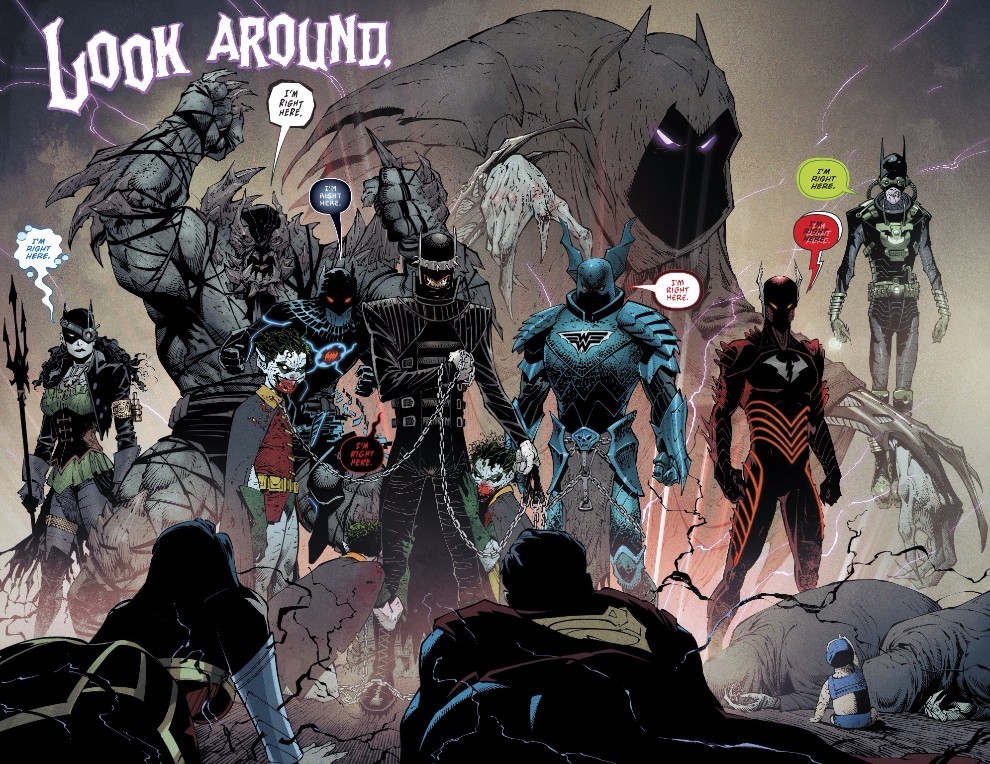 Ugh, the way these Superman doppelgangers are depicted in this crossover component leaves me with a bad taste in the mouth. It’s sickening whenever Superman is put through that kind of wringer. The way the variations on Batman are rendered is no better.

“DCeased: Unkillables” #3 (of 3, DC Comics, May 19, $4.99): This series, like its predecessor “DCeased,” takes place on a parallel world where Darkseid’s Anti-Life Equation has turned most people (and most superheroes) into “28 Days Later”-style zombies. The superheroes, those that aren’t dead or undead, have left the planet with spaceships full of survivors, leaving only a smattering of villains behind, led by Red Hood and Deathstroke. These survivors face a world of crazed zombies, including an undead, virtually unstoppable Wonder Woman.

Just what the world needs too. More of these horror-story variations, and wouldn’t you know it, Jason Todd’s resurrection was so he could lead villains! It’s an embarrassment when this is all they can think of, or when one of the few purposes for reviving such a character is so they can turn him into an over-the-top anti-hero. His characteristics likely aren’t all that different than what they were at the time he was originally knocked off in 1988.

“Empyre: Avengers” #0 (Marvel, June 24, $4.99): This book launches Marvel’s 2020 summer event, a war with Earth and its superheroes on one side, and the Kree and the Skrulls on the other. There are going to be a lot of books in the coming books with “Empyre” in the title, so readers may not want all of them, or may wait for trade paperbacks that will do the sorting for them. But this is the first, to be followed on July 8 with “Empyre: Fantastic Four” #0.

Predictably, no criticism of the stunning overuse of company wide crossovers as a short-term sales boost excuse, yet how amazing he’s willing to admit readers may have a problem with buying all connected books, mainly due to the cost at a time when the Covid19 crisis has made financing difficult. Yet this is not something anybody should invest in, let alone wait for trade paperbacks to do any “sorting”.

“The Joker: 80 Years of the Clown Prince of Crime” #1 (DC, June 2, $29.99): This hardback book shouldn’t be confused with the anniversary comic book mentioned above, which has all-new stories. This book is a collection of reprints from The Joker’s 80-year history, from his first appearance in “Batman” #1 (1940) to the present. It promises to be a graduate-level class in Joker history.

The early Joker material is surely worth reading, but I find it galling that it’s being done in a whole collection dedicated specially to the Joker himself, rather than Batman. DC has really ramped up their celebration of villains lately.

“Stargirl by Geoff Johns” Volume 1 (DC, May 19, $34.99): You may want to know about Courtney Whitmore, a.k.a. Stargirl, when she debuts on DC Universe (on May 18) and The CW (May 19). This trade paperback collects her first 18 or so stories, written by her creator, Geoff Johns. And, honestly, they’re really quite charming.

If they were, I’m sure it wouldn’t have been cancelled so quickly, but as I’d once found several years ago, when Johns first introduced Whitmore, he got off to a very bad start, giving her a grating “personality”, and failed to make the cast sympathetic. Whatever the content of this trade, her solo book only ran 14-15 issues. I’m honestly wondering why this matters, but not the original Jerry Siegel-created Star-Spangled Kid, Sylvester Pemberton, who took up the name Skyman in the 80s prior to his death. Johns has long proven one of the worst omens for DC, and I’m not buying his work, nor will I watch the new TV show in production.

And now, look what else is recommended here, but young adult propaganda:

“Wonder Woman: Tempest Tossed” graphic novel (DC, June 2, $16.99): This YA original GN takes place on Princess Diana’s 16th birthday, where she is swept away by a storm with some refugees, becoming a refugee herself. That’s a heckuva way to first experience Man’s World! “Tempest” is blessed with an all-star creative team, writer Laurie Halse Anderson (“Speak”) and artist Leila del Duca (“Shutter”).

“You Brought Me the Ocean” graphic novel (DC, June 9, $16.99): Two famed LGBTQ+ creators, Alex Sanchez of “Rainbow Boys” and Julia Maroh of “Blue is the Warmest Color,” craft a YA graphic novel with superheroes. It stars the black, gay Aqualad from the “Young Justice” animated series, in what is described as a “coming-out romance.” 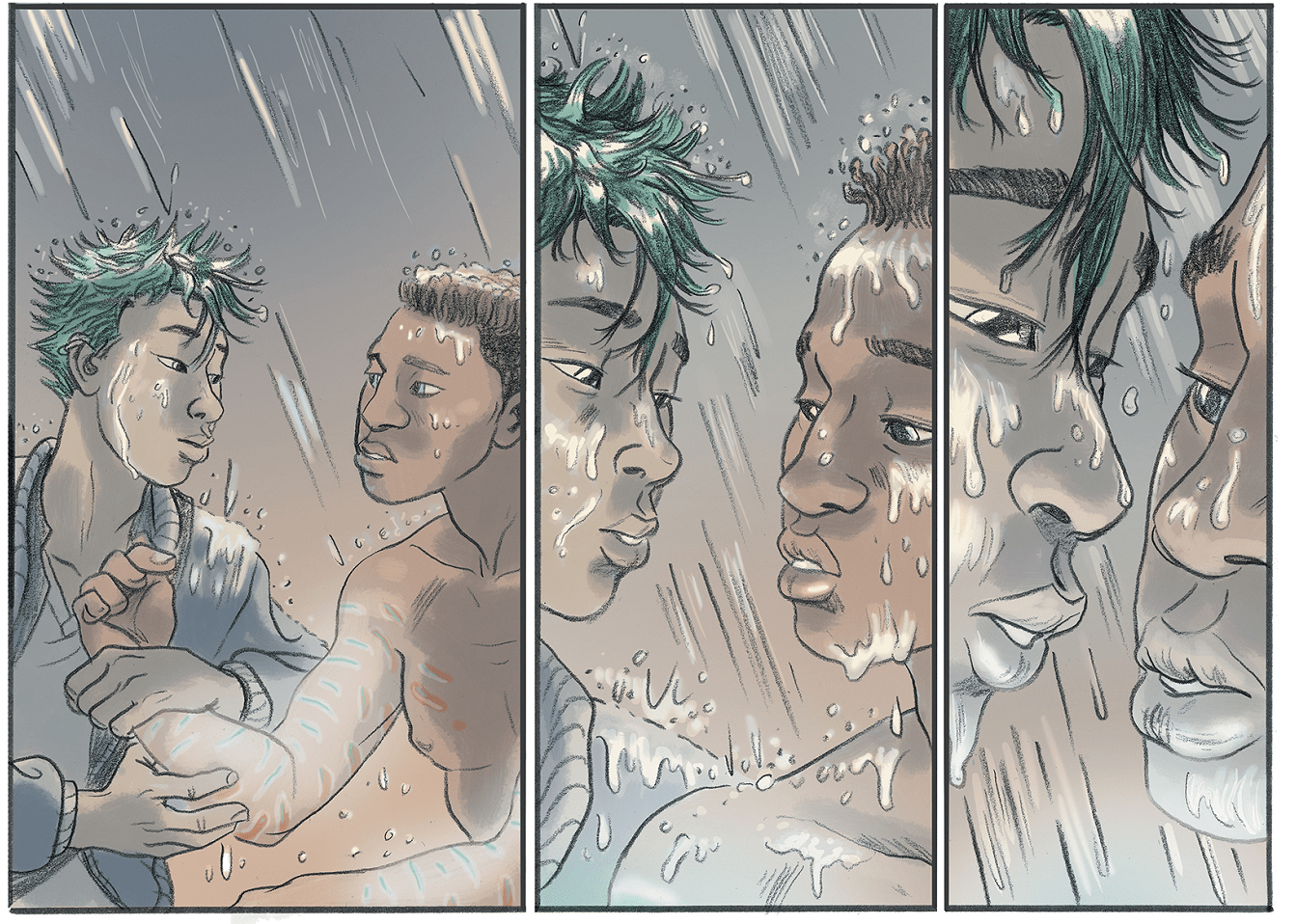 We can only guess what the third will be like. As for the Aquaman-connected book, they already set up the groundwork for that social justice-themed mishmash a few years ago. And I don’t want to think about how awful the WW-based book could be either in its own themes of identifying with refugees.

So here’s another example of the mainstream media giving recommendations that only amount to encouraging everybody to waste their money on all the wrong items. Just gushing galore, and nothing to think deeply about.

Certainly not what most comic fans should care to read during the Covid19 crisis.