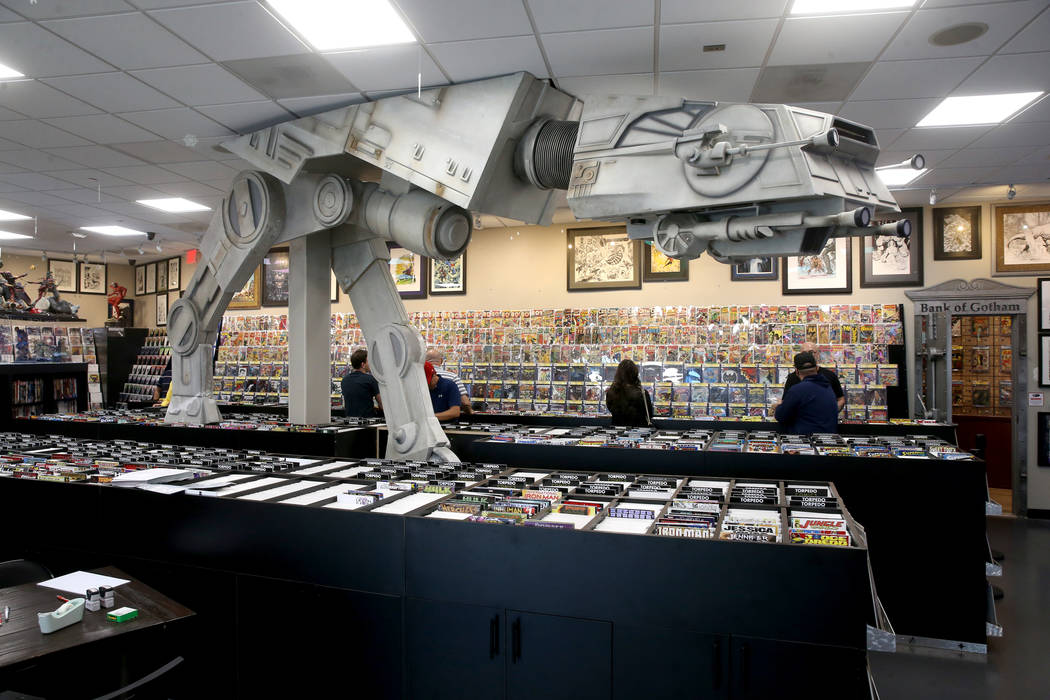 The Las Vegas Review Journal says their comics scene which includes the local convention, if any, is booming, unlike some other parts of the country. Though the article does have some pretty naive perspectives to offer, as we’ll take a look at in a moment. For now, to begin:

The annual May event is aimed largely at introducing newcomers to an art form they probably haven’t thought about since childhood, and it’s a red-letter day on any comic fan’s calendar. For Southern Nevadans, another red-letter day arrives Saturday when the Vegas Valley Comic Book Festival — a free event — runs from 9:30 a.m. to 4:30 p.m. at the Clark County Library, 1401 E. Flamingo Road.

The events, and others like them, are indicators of a robust comic book culture in Southern Nevada. The valley is home to a surprising number of comic book shops, two of which have been recognized nationally. Three major comic book conventions are held here annually. And fans don’t even have to spend money to pursue their hobby, thanks to ever-increasing numbers of e-book and print comics circulated through the Las Vegas-Clark County Library District.

Now isn’t that great! In potential contrast to New York and California, for example, where stores have closed, Nevada’s doing relatively well. But wouldn’t you know it, depending on the perspective, they interviewed some folks with rather awkward viewpoints:

Longtime fan Joshua Wilburn considers comic books repositories of homegrown American mythology. “Not only are (comics) well-written, but they’ve been around so long that they have such a rich history,” says Wilburn, who was accompanied on his Free Comic Book Day pilgrimage to Alternate Reality Comics by his daughters.

“A lot of people don’t understand comic books. They think they’re idiot books. But a lot of the stories really touch on things going on right now. There are stories that talk about the politics going on, homelessness, border problems. A lot of things in our everyday life are incorporated into those stories.”

I think this guy, who holds his cards close to his chest, is alluding to right-wing politics, and if he’s doing it from a negative viewpoint, then he might want to consider why, in modern times, certain people might consider them “idiot” books. Because if they’re going to compound a viewpoint that “liberal = good” and “conservative = bad”, then why should anybody be expected to understand much more than how corrupted they’ve become? In fairness, I’m sure homelessness is a valid issue, but again, if border problems is the issue, and he’s hinting at it from a leftist perspective, he’ll only ensure those on the right who figure it all out will be discouraged.

Comic book fans often point out that comic books aren’t a genre, they’re a medium. Katherine Keller, a comic book critic, blogger and wife of Alternate Reality Comics owner Ralph Mathieu, read comic books as a child but left them behind as she developed other interests. She rediscovered comics by accident in 1991, while working at a bookstore, and began to wonder why “people think these are not good.”

Some adults assume that “comics only could be for small children,” says Keller, who’s also a founder of women’s comic webzine Sequential Tart. “Slowly but surely we’re getting away from that, and I think movies like ‘The Avengers’ are changing people’s minds that, even in superhero comics, we can tell stories that are morally complex.”

Here, I gotta wonder why this lady won’t acknowledge hard truths – the movies haven’t changed anyone’s minds about the medium. There was a time when comics did confront hard issues like drug trafficking and racism, but today, it’s become far more about identity politics and even anti-conservative bashing. Something the movies under Kevin Feige are bound to become in the future.

The funniest thing is how even today, there’s still bound to be people who believe comics can only be for youngsters, despite how the mainstream have become mostly unsuitable for them, with focus on jarring violence and such, yet if you look at what social justice advocates believe under a microscope, you’ll see it’s not really concern for children, but aside from anti-sex propaganda, it’s all just efforts to corrupt and destroy fine franchises with their politics. And as far as children are concerned, if TV cartoons are now going to serve as LGBT propaganda avenues, that just proves they’re not really concerned about children. Rather, they want to selectively indoctrinate.

If the scene in Vegas is booming, that’s good in itself. But for interviewees to offer such naive, superficial viewpoints of what the medium is like is very disappointing.

At the Memphis Comics Expo "Creators Come First!"
Is it Too Late for a Scarlet Witch Solo Marvel Comic Series?
Comics Writer Jim Zub Just Made a Fool of Himself... Again
How Political Comics with "Important Messages" Have Become a Joke
Golden Age Comics Artist Lily Renee Phillips Passes Away at 101
Jewish Comic Artist isn't Hopeful for MCU's Depiction of Israeli Superhero 'Sabra'
DC Comics Seems More About Villainy than Heroism these Days