Based on the scuttlebutt in “Star Trek: Discovery,” it seems the so-called Temporal Cold War from “Star Trek: Enterprise” is being brought back … and it seems it’s been going on all the while in the background. That is, the background of The Original Series, “The Next Generation,” “Deep Space Nine” and “Voyager.”

The notion that members, or just a faction, of the Temporal War have been guiding, or at least influencing, humanity (and possibly others) is fascinating, yet at the same time boring. It essentially turns every episode of every Trek series into a mere “notch” in the Temporal Overseers’ plans. In other words, there’s no free will.

Back in the mid-90s, Marvel Comics made the disastrous decision to turn Tony Stark/Iron Man into a villain; the story “The Crossing” posited that long-time Avengers villain Kang had been manipulating Stark since his first appearance in 1964 (Avengers #8). It was an utter failure for many reasons, not the least of which was fans rolling their eyes at the notion of Iron Man as a pawn of the time-traveling baddie virtually since his origin. (Kurt Busiek thankfully retconned this garbage in Avengers Forever.)

A similar situation occurred with the mega-popular Wolverine; the being known as Romulus apparently used Logan in much the same way that Kang used Stark.

In Larry Niven’s “Known Space” universe, it’s eventually revealed that the alien Puppeteer race has manipulated humanity, mainly for their own benefit. Though this revelation didn’t come about until many years after many of Niven’s stories (mainly in the “Man-Kzin Wars” and “Fleet of Worlds” series of books), in my view it took away much of the fun of reading about man’s growth and emergence in our corner of the cosmos. One saving grace was the notion that Earth’s Amalgamated Regional Militia or ARM, provided somewhat of a counter-balance. However, later Niven-based stories showed the ARM to be almost as much as a “hidden guiding force” as the Puppeteers.

But one highly regarded science fiction series with this premise that seems to work is Isaac Asimov’s combined Foundation, Empire and Robot universe. It works because it takes a creation, the robot, which is intended to serve humans, to its ultimate, logical end.

These three series always were loosely related in Asimov’s early days; it wasn’t until the 1980s that he began to “officially” connect them. The original Asimov works in each area appeared in the 1950s, and covered approximately some 20,000 years of future human history. Humanity’s key development wasn’t so much the hyperspatial Jump, but the robot. Asimov’s Robot novels are loosely tied to his early Robot short stories, many of which feature robot genius Susan Calvin (played by the gorgeous Bridget Moynihan in I, Robot). By the Robot novels’ time, some robots have been built in man’s image — literally. The Spacer societies — those who settled the first fifty extra-solar planets — have developed and made use of these humanoid servants for myriad purposes. The most popular — and ultimately most influential — of these robots is R. Daneel Olivaw.

R. Daneel (the “R” for “Robot”) becomes the partner of noted human detective Elijah Bailey in helping to solve several high-profile killings. (See: The Caves of Steel, The Naked Sun and The Robots of Dawn.) Another robot, R. Giskard Reventlov, was constructed with the ability to detect, read, and influence human thoughts. In the crucial connecting novel Robots and Empire, Giskard conceives of the pivotal “Zeroth Law” which overrides Asimov’s legendary “Three Laws of Robotics“ by permitting robots to act out of regard for humanity as a whole instead of individual humans (the First Law). Using this new Zeroth Law, Giskard allows a madman to make Earth’s crust radioactive, thus forcing the vast majority of humanity to venture forth and begin a new wave of settlement across the galaxy. All in the name of preserving humanity. 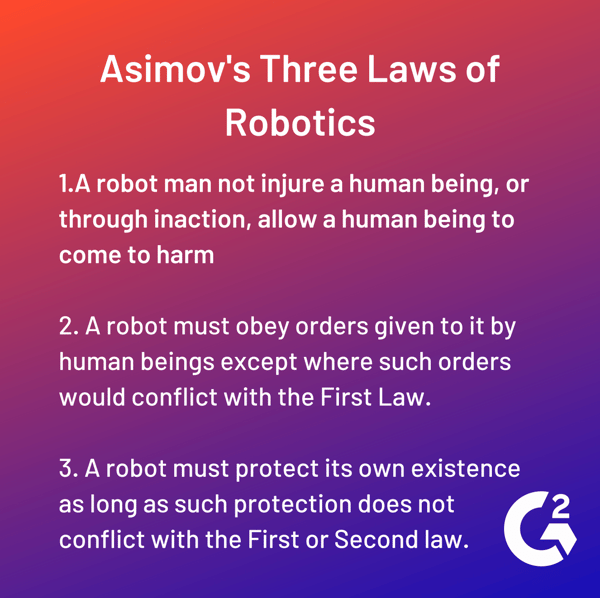 But that’s far from all. R. Daneel Olivaw becomes humanity’s ultimate guide, conceiving of various plans through the millennia to maintain and preserve humanity’s dominance, and survival, in the Milky Way. Asimov died in 1992 but his estate permitted other authors to “play” in his universe. The “Killer Bs,” aka David Brin, Greg Bear and Gregory Benford, together put out “The Second Foundation Trilogy” which greatly expands upon Isaac’s ideas and concepts. The ultimate finale is Brin’s Foundation’s Triumph which pretty much explains everything you ever wanted to know about the Galactic Empire and Foundation. Perhaps the most controversial was Olivaw’s use of “mentalic dampers” — hidden satellites around each human planet (20 million in all!) which kept the populace calm and tranquil, but also served to diminish creativity and curiosity.

This, Foundation’s inventor Hari Seldon finally realizes, is what has kept humanity’s technology curve static for so very, very long: It was the robots fulfilling their purpose to the extreme — and final — goal.

What is that “final goal”? You might enjoy this eye-popping interview that discusses the future of AI and robotics and what this could mean for humanity and the “final goal”… (22 minutes in)

Catherine Austin Fitts is an American investment banker and former public official who was the
U.S. Assistant Secretary of Housing and Urban Development for Housing in the 90’s