L.A. Times Suggests that Comics Have ALWAYS Been Racist 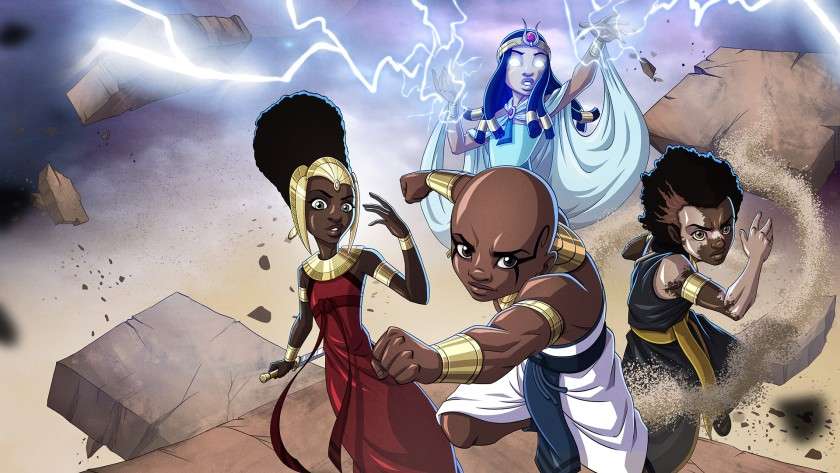 Here’s a Los Angeles Times article about the founding of Black Sands Entertainment, and while I’d like to think this is a great idea for Black Americans to come up with stories starring Black protagonists, not just the article but also the company in focus appears to be following politically correct mentality.

Manuel and Geiszel Godoy are military veterans, and they believe deeply in social justice. But above all, they are entrepreneurs who saw an underdeveloped sector in their industry and dove in.

I’m afraid using that term is not helpful, based on how political it’s become. You know something’s wrong when that kind of PC slang comes up. And then, there’s this:

Black Sands isn’t the first through the gate. It joins a growing hive of Black creators who’ve carved space in a format that for decades was steeped in racism and exclusion.

And what does that mean? That by the time Stan Lee came along and conceived Black Panther, among other Black cast members in the MCU, the problem of racism still reigned supreme in virtually every way? By the 1990s, the problem was largely thought solved, except for how the leftist MSM wanted the problem to remain, and worst, believed it was acceptable for anti-white racism to be tolerated. And would you believe what kind of examples of graphic novels are turning up here?

But there are other genres on the rise — from romance and horror to Black superhero reboots and musings on workaday life. In the dark-fantasy adventure “Submerged” by Vita Ayala, a girl embarks on a quest to find her estranged brother after he gets lost in a New York City subway. Ebony Flowers’ “Hot Comb” explores Black women’s relationships with their hair. In Micheline Hess’ horror comic “Diary of a Mad, Black Werewolf,” a clan of Black female werewolves prey on racist cops and “Karens.”

Just as Black Lives Matter builds on movements of the past, the rise of Black comics is more of a revival.

A most telling example of a genre on the rise is the political one, seriously diluting the impact they think this article could have. If they really want this to impress, they did not need to bring up BLM at all. Because if all the the LA Times can do is obscure their most violent acts like arson, then they’re doing a terrible disfavor to all. Hmm, and what could they mean by “existing power structures”?

“One thing that gets lost when talking about the great Black orators, thinkers and historical figures of our time are the Black comic creators,” says Sheena Howard, professor of communication at Rider University. “Challenging racial stereotypes in comics is a big part of what Black creators have done, alongside directly addressing injustice.”

For heaven’s sake. I’ve written about Black artists and writers of the past before, like Matt Baker, one of the most notable artists for Phantom Lady, and there’s also Jim Owsley (Christopher Priest), and Billy Graham, yet those people don’t seem to get any mention here, which drains more impact. And after citing Black Panther (but not his creators, Stan Lee and Jack Kirby), they say:

But the road to Wakanda was long and painful. For much of the 20th century, racist images of Black characters filled the pages of the mainstream press. Many cartoons were caricatures derived from blackface minstrelsy, like Ken Kling’s “Joe & Asbestos.” Even children’s books by admired authors, such as Dr. Seuss’ “If I Ran the Zoo,” depicted Black people as monkeys.

“We often see ourselves through the eyes of others,” says Howard, editor-author of “Why Wakanda Matters: What Black Panther Reveals About Psychology, Identity, and Communication.”

When those images are internalized, she adds, they can damage identity and self-esteem. “We often get our perceptions of others from the media ecosystem.”

Since they mention this, I’m wondering what they think of Kyle Baker’s art in The Truth: Red, White & Black, that loathsome 2003 miniseries turning Captain America’s origins inside out for the sake of anti-American propaganda? Would they give the stereotypical, unserious art a free pass because it carries a vision that coincides with how they might view America, and because Baker’s of Black descent himself? And I think that part about the Seuss book allegedly depicting Blacks as simian-like is also an exaggeration. But certainly, one must wonder, even if stereotypical illustration is bad, do the interviewees consider censorship acceptable?

“A lot of the Black cartoonists early on were trying to normalize Black life — showing the good and the bad,” says author and illustrator John Jennings. That’s what made Ormes’ and Harrington’s comics powerful; they were outliers but they didn’t trade on exoticism. “Their stuff was slice-of-life work. … People tend to forget that having joy in the face of oppression is a radical act.”

How ironic they should say this, because that’s exactly the problem with today’s atmosphere: too much depression and pessimism, and not enough optimism and comedy. And the whole genre of comedy is being smashed into the dust today by political correctness. It’s hard to find laughter when you’re always acting out of political sensitivity over whether you might end up insulting specific liberal groups, who aren’t very honest about their positions themselves. I’ve argued before there’s far too much Batman influence these days, if we were to cite the Masked Manhunter as a figure representing where the entertainment industry’s ending up, it doesn’t sound like these folks are improving on that.

Similar stories, like Kyle Baker’s series “Nat Turner,” about the slave rebellion, and David F. Walker’s “The Life of Frederick Douglass” offered lessons about history, revolution and resistance. Aaron McGruder’s syndicated comic strip “The Boondocks” (1996 to 2006) commented on political and popular events through the eyes of an African American boy.

Ah, what’s this here, they mention Baker, the very illustrator who turned out that embarrassing Marvel miniseries referenced above. Is there a double-standard here? It’s certainly beginning to look that way, if they can’t take the time to point out how poor the character design was. The article even has a picture of a Black Panther issue penned by Ta-Nehisi Coates, strongly hinting where they stand too. While Priest’s work on the Marvel Knights imprint, whatever one thinks of it, is curiously ignored, possibly because it wasn’t PC enough for their tastes. Oh yes, and they mention far-left-leaning Walker too, I notice. Such sugarcoating is certainly telling where this could be going.

Now that history is being made again — on the streets and on the page — old characters are being reimagined for modern times and defunct imprints are being revived.

DC Comics recently announced it will reimagine the 1993 origin story of Static, the electricity-wielding Black teen (a.k.a. Virgil Hawkins), who got his superpowers after a clash between gangs and police — an event known as the Big Bang. This time, Hawkins’ superpowers originate from a police brutality protest.

And when it’s that politicized, how can it be entertaining, or even offer something to make you think well?

“I grew up reading comics like X-Men, where these white characters are supposed to be outsiders,” he says. “People call them analogies for minorities like Black people, and I’m like, ‘No. That’s not accurate.’” When Cyclops and Jean Gray take off their costumes at the end of the day, they’re white. Nobody’s pulling Wolverine over because he’s driving a nice car.”

So they can’t even serve as stand-ins for Jews? Funny thing the above misses is that even Storm didn’t usually encounter trouble of this sort either back in the day, yet they don’t seem to consider that either. Even Robbie Robertson and Falcon were far from having to put up with such awful situations in the stories. Still, this does give a telling clue somebody’s not really an X-fan. To think Lee and Kirby put so much energy into their creation for this.

In 2016, Osajyefo and others launched a successful Kickstarter campaign for “Black” — about a teenager who discovers he has superpowers after surviving a cop’s bullet. After “Black” was published, movie offers flooded in. Last year, Warner Bros. acquired the feature adaptation rights.

This graphic novel sure sounds political alright. No wonder Hollywood’s eager in their modern incarnation to launch a filming project. I’m sorry, but this is just more superficial propaganda masquerading as sophisticated news coverage, preferring to worry all about biased politics and not about really serious matters.

While we’re on the subject, Texas Public Radio’s got a podcast/article about “woke comic culture”, and with that kind of headline, you know something’s wrong. It starts with:

Legendary Marvel Comics mogul Stan Lee famously said he wanted the world in comics to look like the world outside our window. Now, comics and their digital representations are increasingly aligning with his philosophy of making superhero stories diverse and inclusive.

So Lee’s vision was never before what they say it is now. Such disrespect they give him here. And what they really mean is the following:

It’s official that Captain America in the Marvel Cinematic Universe is an African-American male. The latest offering from Marvel also brought into canon the tragic story of an African-American soldier who was experimented on and imprisoned by the U.S. military.

How has the relationship between race and the American superhero evolved from the Civil Rights era into modern comics?

How has this genre evolved to incorporate characters of varying genders, sexual orientations, races and ethnic backgrounds? How have social and political issues been featured in superhero storylines?

How have these changes been received by fans and the mainstream? What was the impact? Does it really matter if the world in comics looks like the world outside our window?

Answer: it shouldn’t have to matter whether it looks like the “real” world. All they’re doing is belittling the fantasy genre in the process, with some of the biggest victims being Edgar Rice Burroughs’ Warlord of Mars, and even the magical kingdom settings of Dungeons and Dragons. If “real world” is what they care about, they obviously have no love for escapist fantasy. And here’s the most surprising thing about this item:

How do superheroes reflect and impact our personal and national identities, and concepts of heroism and leadership versus evil and fear of the “other”? Does it matter that these stories still glorify violence and often hypersexualize its main characters?

If we’re referring to violence, it does, IMHO. Because there’s been far too much of that for many years. I’m honestly amazed they bring up the topic of glorified violence; that’s probably the most straightforward argument they’ve made in a sea of SJW propaganda. As for “hypersexualization”, that’s awfully petty by comparison, and I’d rather not worry about it when there’s so much jarring violence played for cheap sensationalism out there.

With that told, this too is sadly another example of inability to be serious about the art form, and demonstrates why the medium continues to collapse. 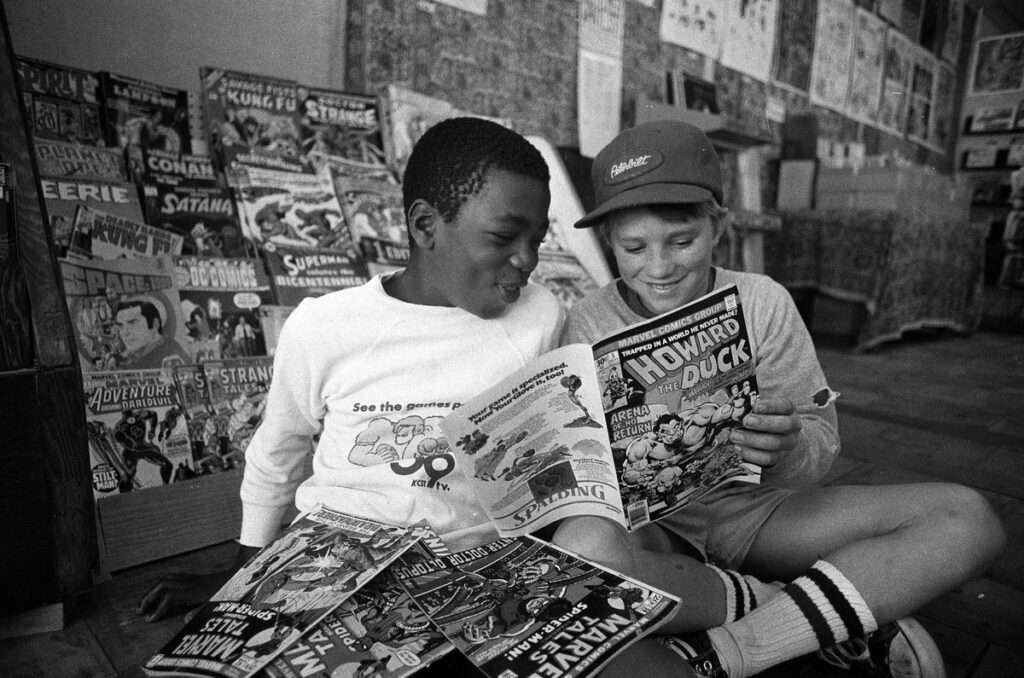