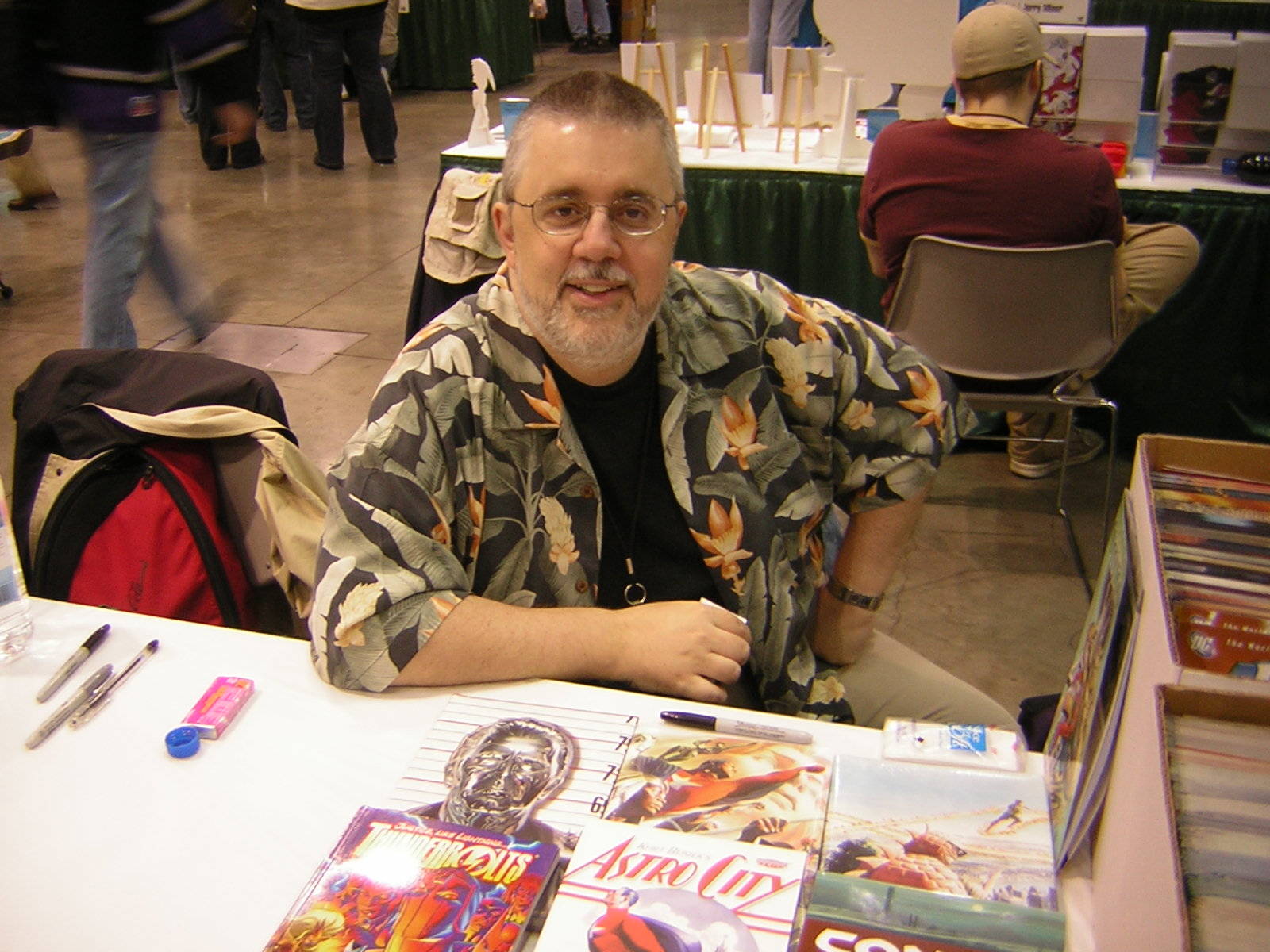 Prolific comic book writer for both Marvel and DC, and equally prolific anti-Trump tweeter, Kurt Busiek, has been spotted once again arguing with other people on Twitter about his left-wing politics, and once again he is not coming off very impressively.

Here’s where it began:

What if personal experience is such a complex multi-variables entity that it makes the concept of privilege entirely irrelevant?

To clarify, privilege could be relevant at a systemic level but irrelevant at the individual one?

And maybe winged monkeys could fly out of Donald Trump’s butt at midnight on New Year’s EST.

There’s much better stuff one could wish for, but Busiek’s missed every chance to celebrate the individual and not play identity politics. What his more liberty minded readers could be wishing for is that Mr. Busiek would just let it all go, or that his editors/publishers would tell him to knock it off with stuff his followers would rather not hear.

This is gibberish. It’s saying, essentially, that if you imagine two people with only tiny differences, poor queer black women don’t actually have it harder than rich straight white men. https://t.co/JAzYhK6Xi5

Umm, if the discussion is about lesbians, they do have it harder than men, if we take Andrea Constand’s case at Temple University as an example: the board of trustees under Patrick O’Connor didn’t take any action against Bill Cosby when he was first accused of assault by Ms. Constand, her lesbian leanings notwithstanding. Not sure if that had anything to do with her being white and Temple University is reportedly a mostly liberal establishment, but what’s Busiek’s point anyway?

You didn’t try to discuss anything seriously, you what-iffed and could-be’d. That imagination, not argument.

Busiek didn’t try to discuss anything seriously. He literally talked about monkeys flying out of the U.S. President’s anus, but if you will recall, Mr. Busiek does consider the notion that a ladies’ room where men are allowed in because they claim transgender status will be a perfectly harmless and peaceful place for all women. Kurt Busiek is an imaginative writer if nothing else.

That doesn’t make “the concept of privilege entirely irrelevant.” Even for those two people. https://t.co/NTQEwPZJpA

The rich straight white guy has privilege operating in his benefit in many, many ways, even if he’s sick. Privilege isn’t one giant thing that makes life perfect; it operates on all kinds of levels.

Is Mr. Busiek suggesting that only heterosexual white men have privilege, but not homosexual white men like Harvey Milk, Kevin Spacey and Bryan Singer? I fail to see the logic here. But, since Kurt seems so concerned about straight, rich, white men, how come he never has anything to say about the liberal variety like Bill Clinton and Harvey Weinstein? He has never even bothered to mention such loathsome left-wingers in his discussions, nor how the latter was a donor to the campaigns of the former and his wife, there’s no use complaining about privileged white guys at all, I’m afraid. Say, and what about Eddie Berganza, who, from what I’ve learned, was a native of Guatemala? He was protected by the higher echelons at DC, and one could say he had his own privilege provided. That doesn’t count? Presumably not to Kurt, because Berganza isn’t white.

Sure, the rich guy doesn’t have an easier time with anything — not insurance, not relatives coming to visit, not doctors being willing to treat him, because if all you look at it one factor (e’s sick) the rest is irrelevant.

Except it isn’t, it’s still there. https://t.co/lT3QSVckXw

Then it’d have to be there regarding the other type of white men too, wouldn’t it? Even non-whites like Bill Cosby, who exploited his background for violating dozens of white women, and black women too.

Being healthy is an advantage. But that doesn’t magically make being white not one. It’s still there.

There he goes again with the “rich, straight, white guy” rant. Is Kurt Busiek trying to say that whites all have the advantages in the health industry, but not blacks? Sorry, this does not compute when you consider all the not-so-rich whites out there who aren’t faring as well. Like, for example, my own grandmother from my mother’s side of the family, whose doctors didn’t do a good job and ultimately failed her health by the time she’d passed away in 1986. There’s also an aunt and uncle of mine who once lived in Broward County, Florida, who were far from wealthy, and the healthcare they got was very sub-par. And as for “rich, white guys” does he think Donald Trump is better off than someone like Daniel S. Peña Sr., whose parents came to America illegally from Mexico, but he got his citizenship and eventually grew up to be worth billions?

But we can easily see Trump’s privilege operating, right there, benefiting an individual. The idea that another white guy may be seriously ill doesn’t mean that privilege is irrelevant to individuals. It means that the sick guy is sick, and that’s a bad thing…

…but privilege is still a thing, and it’s still relevant, even among individuals.

It also makes no sense to differentiate based on racial background.

No, it’s not assuming any such thing. https://t.co/XSzKPc5Hm5

What one person prefers does not mean privilege doesn’t exist. Or even that that one person is unaffected by it. https://t.co/47mErszg8u

It doesn’t make those “specific struggles” unaffected by privilege, either.

To say that privilege is irrelevant on an individual level…

In that case, he’ll have to acknowledge privilege exists among the left. Later, when one Twitterer points out how there have been disparaging comments about Ben Carson, possibly by “woke” SJWs, he says:

This begs the question if pro-diversity is the new, male feminist ally, hence why there’s a lot of disparaging tweets onto Ben Carson, Tim Scott–by, ‘the woke.’

There’s no question there. There’s not even a sentence there. https://t.co/k3i63ChUWR

Looks like classic deflection. Either that or Mr. Busiek is perfectly willing to minimize the hostility faced by HUD Secretary and former Republican candidate for President Dr. Ben Carson for being a black conservative. I’m afraid that’s just boomeranging back to one-sided attacks on the right again, all the while ignoring any errors made by the left. Kurt Busiek should “resist” the notion that bad deeds only exist on the right side of the political spectrum. If Twitter social justice warriors like the far-left Kurt Busiek are only interested in attacking one side, then nothing will ever be solved. And his constant railing against straight, white males should probably be criticized too, since statistically speaking that probably makes up the majority of his readers of his DC title, ‘Astro City’ which according to Comichron, sold just under 9,000 copies for DC in November.

When James Bond’s Daniel Craig Almost Joined the MCU
WaPo Exploits Recently Deceased George Pérez to Push Identity Politics
Star Wars Day Offers 2022: May the Fourth Be With You
Elon Musk Buys Twitter - and the Meltdowns Have Been Glorious
Gunn Has No Desire to Work on Any Other Marvel or DC Projects
Savage Dragon Creator Reveals His Inner 'Toxic Fan', Then Bends Knee
Don't Say Gay: China Forces Disney to Dump their LGBTQ Push