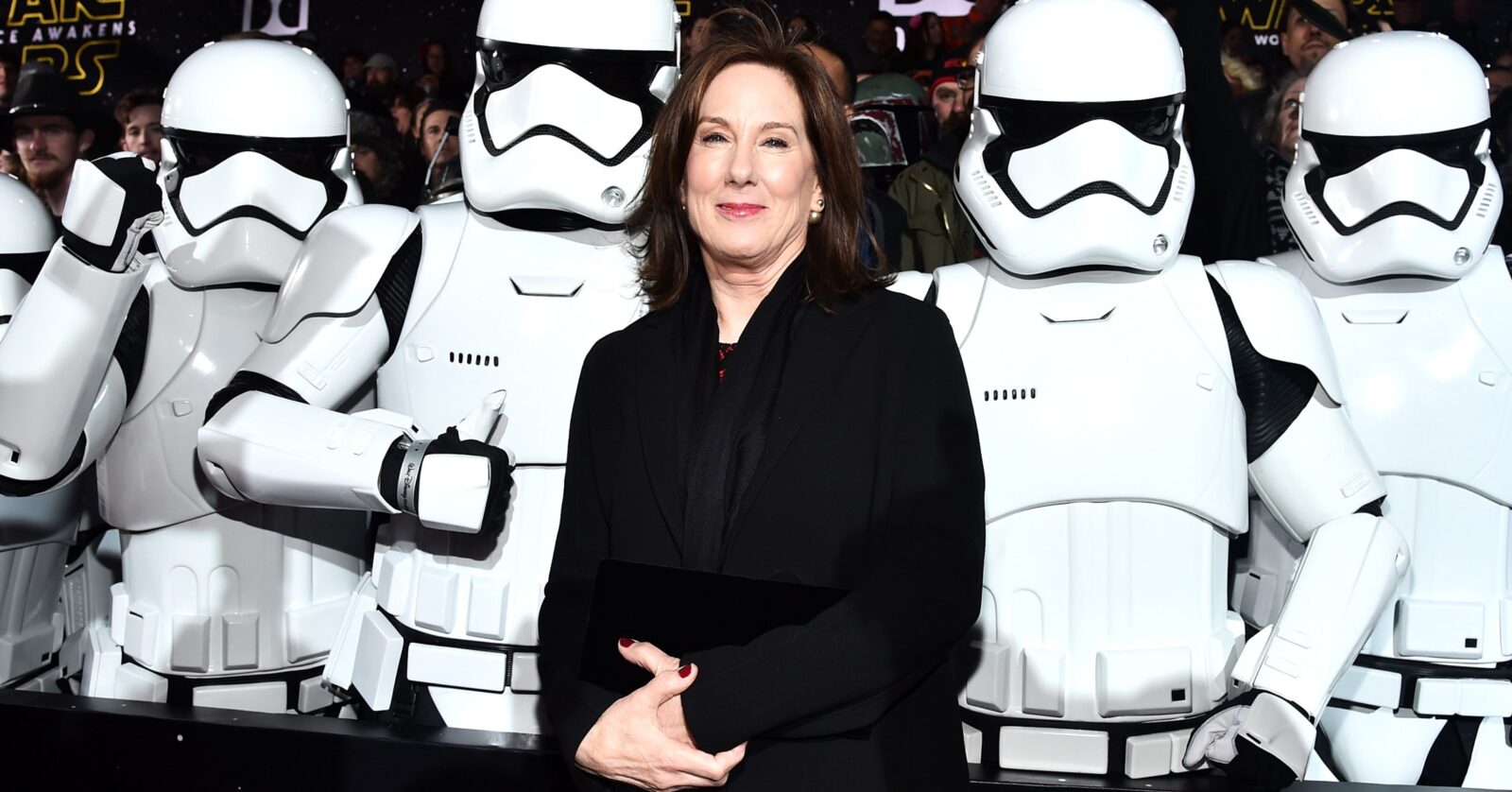 Recently, Erica Jimenez of Evie Magazine wrote an enlightening article entitled, John Boyega Wasn’t A Victim Of Racism. He Was A Victim Of Disney’s Misguided Attempt At Feminism. In the article, she makes many of the very same arguments that the Fandom Menace has made over the last 3 years.

She argues that John Boyega’s character was sidelined, not because of his race, but because of Kathleen Kennedy’s desire to push women to the forefront and to elevate women by degrading the men all around them. In reality, Kathy’s Star Wars is far more misandrous than it is racist.

The Force Awakens may have been a bland and somewhat derivative rehash of a beloved series, but at least it was enjoyable. What happened with The Last Jedi, however, is a completely different story. I won’t go into the generally terrible story writing or the magical Force powers that are suddenly invented just for that film. The real underlying flaw in the film, of which the bad writing and the magic powers are just byproducts, is the sudden desire to make Star Wars a galaxy of empowered women.

Rian Johnson and the team at Disney clearly couldn’t resist the siren song of feminism when writing this film. While the Star Wars series has always had powerful female characters, this clearly wasn’t enough for Johnson. The film’s clear intention is to make all of the female characters strong and “empowered.” The best way to do this? Emasculate every male character, make their characters defunct and useless, and let the ladies rule the day.

Every time the male characters go to save the day, they’re either thwarted or undermined by one of the female characters. At the very beginning of the film, Poe saves the day with his quick thinking. Princess Leia rewards his bravery by demoting him for subordination. Later, when Leia is almost killed during another Star Destroyer attack, Poe is passed up as acting commander of the vessel (even though he is their head fighter pilot) in favor of the queen of all bureaucrats, Vice Admiral Holdo.

I’ve likened the relationship between Poe and Holdo as that of the overbearing mother nagging her child who is having fun with some mild derring-do on a Big Wheel.

Erica closed her article with:

John Boyega’s character wasn’t a victim of Disney’s racism — he was a victim of Disney’s obsession with female empowerment. It isn’t good enough anymore to have strong women to fight alongside the men. Strong men are a threat to today’s “empowered women.” Finn’s character, who many had hoped would become a Jedi in the series alongside Rey, was cast aside to feed a bigger monster: the never-ending hunger for more social justice.

Anyone who has been reading this blog, or watched my documentary on Kathleen Kennedy won’t be surprised by any of this.

So why is Kathleen Kennedy’s legacy going to be that of a racist Star Wars instead of a misandrous Star Wars? Because the legacy media is already writing the “racist” narrative.

We’ve recently seen the legacy media rush to agree with and confirm John Boyega’s recent suggestions that the Disney Trilogy is racist. But the legacy media narrative started even before that. Shortly after the release of The Rise of Skywalker, the legacy media decried the sidelining of Rose Tico in the film. 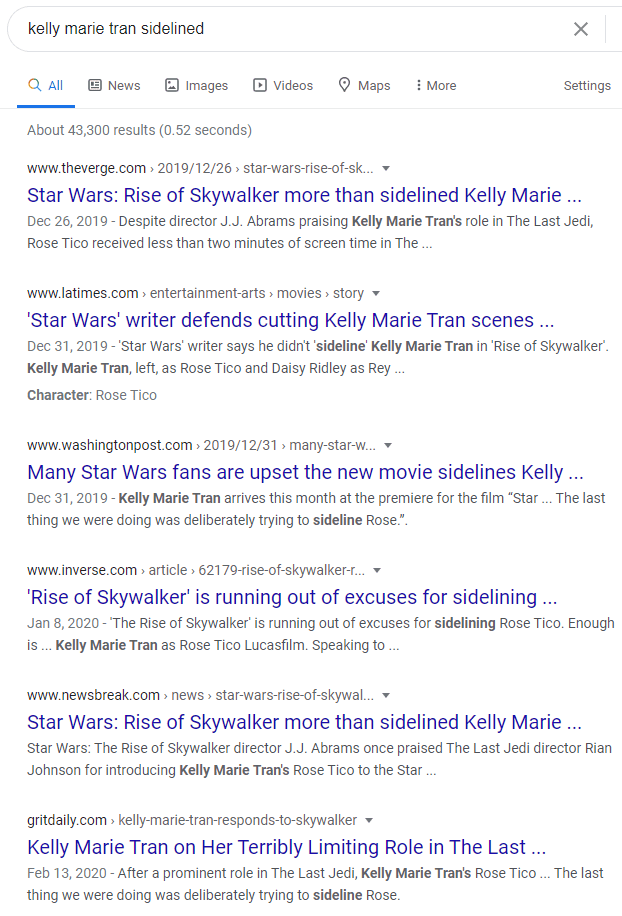 John Boyega has alluded to problems in The Last Jedi before. Back in December of 2019, he stated in an interview with Hypebeast:

“The Force Awakens I think was the beginning of something quite solid, The Last Jedi if I’m being honest I’d say that was feeling a bit iffy for me,” Boyega says. “I didn’t necessarily agree with a lot of the choices in that and that’s something that spoke to Mark [Hamill] a lot about and we had conversations about it. And it was hard for all of us, because we were separated.”

Boyega’s latest interview with GQ, merely feels like another shot across Rian Johnson’s bow. And I suspect Rian knows this. Because as of this writing 3 days after the publication of the GQ interview, Rian who is quite prolific on Twitter, has remained absolutely silent on the matter.

In my opinion, it’s only a matter of time before John Boyega gives another interview with more specifics. And when he does, we may find the legacy media’s take on The Last Jedi fundamentally transformed. When it is, Kathleen Kennedy’s legacy will be that of a racist Star Wars. Particularly since so many female feminist activists will be writing the articles. They’re certainly not going to malign themselves.

We’ve all seen this before when the media accused George Lucas and even Ahmed Best of creating racist caricatures.

The big difference here is, Ahmed refuted accusations of creating a racist stereotype. In this case, the actor John Boyega, is going along with the narrative of racism. And the fact that he calls out Daisy Ridley and Adam Driver, and mentions Oscar Isaac, means that it’s only a matter of time before those three are asked about Boyega’s comments. How they respond could start an avalanche of animosity towards the Disney trilogy that may be impossible to stop.

So for these reasons I believe that Kathleen Kennedy’s Star Wars legacy will end up being one of racism. That’s ironic, given that it was Kathy’s feminist activism that caused all of this, as Erica Jimenez points out.