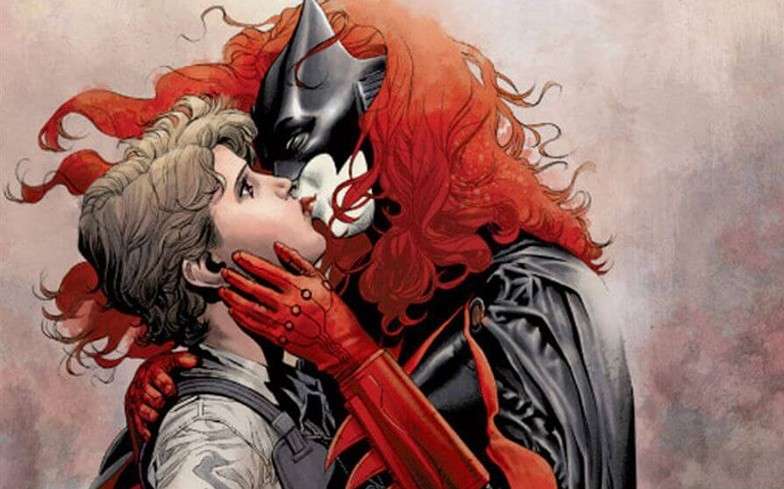 The Jerusalem Post wrote about the TV adaptation of DC’s lesbian Batwoman getting a Judaist funeral, as though that alone gives it significance:

Superhero Kate Kane, better known as Batwoman, was given a notably Jewish funeral following her presumed death in Sunday night’s episode of the CW show Batwoman.

Kane’s fate follows a plane crash that saw her to be presumed dead in the second season. As many have noted, the Jewish nature of the funeral was considerably overt. Rather than being buried in a typical ornate and cushioned coffin, Kane was laid to rest in a simple wooden coffin, marked only with a single Star of David.

The mourners also recited Jewish prayers and were all seen wearing kippot on their heads.

While Halacha dictates that Jews are required to be simply buried into the ground without a coffin, US law requires the use of coffins. As such, most Jews lay themselves to rest in just wooden coffins so they will biodegrade naturally, rather than decay and rot in a coffin made of non-biodegradable materials.

It’s bad enough this Greg Rucka-developed character had to be made into a lesbian solely for social justice brownie points; one of the earliest SJW examples from the late 2000s. If they think this is such a big deal that a Jewish funeral is seen conducted on such a TV show, forget it, I’m not falling for it. Nor does the following give any reason for me to appreciate the TV show, let alone this whole article:

Judaism has always been an integral part of Kane’s character since her debut in the comics in 2006. Since then, she has been a trailblazer in DC Comics as one of the most prominent Jewish and lesbian superheroes.

The implications of this revelation means that not only is Batwoman Jewish, but so too is Batman, by virtue of having a Jewish mother (traditionally, halachic authorities have considered Judaism to be inherited matrilineally, meaning if one’s mother is Jewish, so are they).

Jewishness, however, has largely been left out of Batman’s depictions in the comics, with the character having been depicted in the past as a lapsed Episcopalian.

However, Judaism has played a role in the background. Batman’s creators, Bill Finger and Bob Kane, were both Jewish, as were many of the early comic creators in the Golden Age of Comics. And in his depiction in the TV series Gotham, which told the story of a young Bruce Wayne before he became Batman, the character was played by Orthodox Jewish actor David Mazuz.

And lest we forget that another of Finger’s creations, Alan Scott, was abused far worse than Kate Kane, based on how he was an established character, in contrast to her being a new one when she debuted in the late 2000s, albeit was only introduced to take up a costumed role that had already been conceived in the Silver Age, thus lessening the impact because it was obvious they only created her to make a LGBT statement.

But on occasion, Batman’s Jewish heritage does shine through on the pages. This was most evident in December 2020’s Detective Comics #1033, written by Peter Tomasi and drawn by Brad Walker. On the last page of this arc-ending issue, Bruce Wayne is seen going to the grave of his faithful butler and father figure, Alfred Pennyworth. But rather than leaving flowers, as many would do, Batman instead leaves a single stone atop the tombstone, in accordance with Jewish custom.

Can’t say I’m shocked they wouldn’t point out how reprehensible it was when Tom King put Alfred to death, and seeing Bruce using a simpler custom than flowers doesn’t change how forced it was to kill of the famous butler and estate caretaker. This is an otherwise left-leaning paper taking a superficial view of these stories, no matter how poorly structured they were to begin with. There’s plenty of reasons why a Judaist who’s a realist shouldn’t praise or back these steps, because of the politics and cynical writers/artists involved, and the paper’s failure to admit that is why it’s the kind of news site where you have to be wary, and take what they say with a grain of salt. Instead of doing the Jewish creators of the classic characters a favor, they’re only enabling the abuse of the creations to continue without comment.