An Op-Ed by Spoot Lepedus

So I was looking into this whole James Gunn pedo-Twitter thing with the intention of writing a piece on why Disney did the right thing by firing him. There are many points that can be addressed concerning this issue: free speech, public shaming, the hypocrisy of social media, what line (if any) exists when it comes to comedy, etc., but I had pretty much focused in on the aspect I felt was being underreported in regards to this story – and that is that James Gunn is a fucking scumbag that consorts with other scumbags and got what he deserved. My “proof” isn’t really proof, it’s still just an opinion and essentially a guilt-by-association argument, but I’m not trying to prosecute a case in front of a Grand Jury here; I just felt that some of the unsavory details omitted by the press really matter. 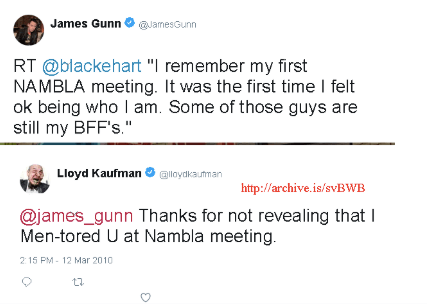 Then there was the NAMBLA jokes he exchanged with Lloyd Kaufman, his “men-tor” and the co-founder of Troma Studios (you know, Toxic Avenger and shit). There’s plenty to suggest Kaufman was no stranger to smut, having directed several porn films in the early 70’s, as well as having a 15-year old girl, Kansas Bowling, as his “protégé”. (Kansas directed the Satanic-as-fuck video for the Death Valley Girls at age 15, later going on to make a video where she and her sister sucked on ping pong balls, force fed each other pizza, and got led around like dogs in their panties by Kansas’ 70-year old boyfriend Rodney Bingenheimer). 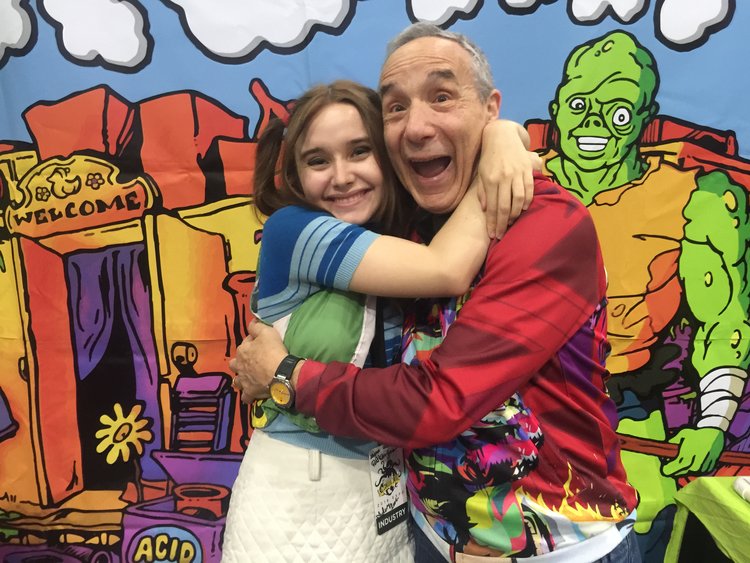 Kaufman also is friends with Tony Podesta, who favors pedo art and occasionally enjoys “spirit cooking” with his Satanic-as-fuck friend Marina Abramovic. (I have to wonder what a super powerful D.C. lobbyist and the head of a trashy B-movie studio could possibly have in common . . .). 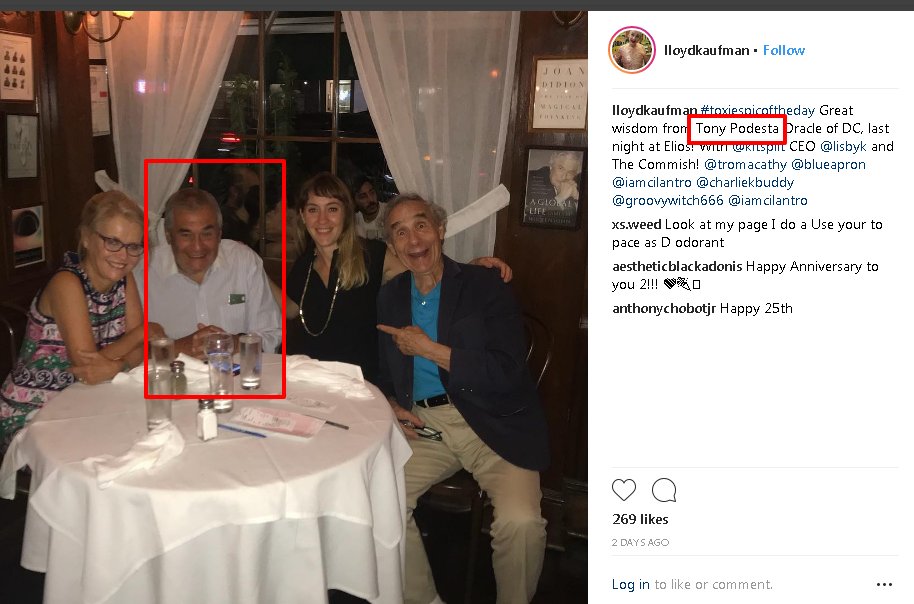 Again, none of this proves Gunn actually did anything illegal, but it goes to show the cesspool of his celebrity circles. I wouldn’t be shocked if it turned out James liked to actually engage in some of the shit he seemed so obsessed with tweeting about. 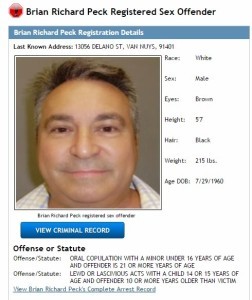 One of the problems when you’re crawling up the devil’s ass playing six-degrees-of-pedo-separation is that it keeps going, and you start to get a stomach ache from all the shit-covered black pills you’re eating along the way. There are many more branches that could be followed, but I decided I had enough when I hit this pocket of shit. It turns out that Disney hired Brian Peck, who had been convicted on two counts of sexually abusing minor when he was with Nickelodeon, to work on the kids’ show “The Suite Life of Zack and Cody.” What the fuck? How did this happen? Is it possible that the people in charge of hiring didn’t know he was a registered sex offender? I mean, he was well known in the kid-show circles.

I find it hard to believe that no one at Disney had any clue this had happened. I think they gave him a job because there was a tacit understanding that if he kept his mouth shut about the other diddlers in the business, they would reward his loyalty when he got out of jail. Think this is just another crazy conspiracy theory from Alex Jones? Maybe it is, sure, but let’s see what the devil’s asshole has to say about it. 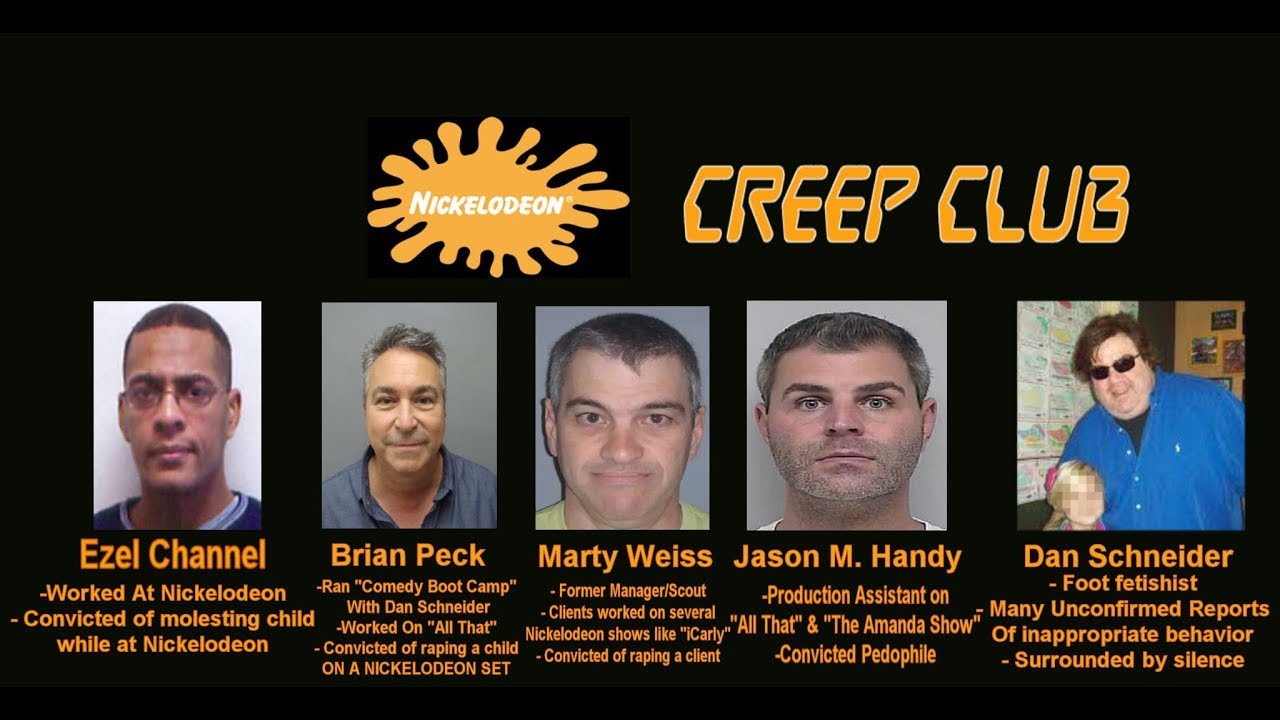 Peck worked on “Growing Pains” prior to his arrest with producer Steve Marshall, who also happened to be arrested for distribution of child pornography. By the way, Bob Villard, Leonardo DiCaprio’s publicist (did you know Leo was on “Growing Pains”?) was also arrested for child molestation. Villard was friends with child talent agent Marty Weiss, who worked on iCarly and some other kids’ shows, and who was also arrested. Any guess as to what he was arrested for? Cocaine trafficking? Jaywalking? Child molestation? Oh yeah, I remember. Peck also worked with Dan Schneider on the Nickelodeon show “All That.” Nick recently parted ways with Dan, who had created many successful shows for them.

Did I mention that Bryan Singer’s friend Marc Collins-Rector was arrested for transportation of a minor with the intent to engage in sexual activity? What do think these people do when they get together and hang out? Play Fortnite? Beer pong? You think they ever share their photos and movies with each other? “Hook each other up” so to speak? These pervs worked on a lot of the same shows and knew a lot of the same people…. I tell you, this dank rectal tunnel of pedos stretches into infinity . . .

So anyway, what I’m thinking now is that Disney made the decision to fire the Gunn not for moral reasons, but financial ones. Disney is one of the few corporate monsters that hasn’t gone full hard-core Liberal, yet, as they understand offending and losing those Republican, conservative, and Christian dollars is a stupid business move. I think they probably thought about it in terms of how having him or not would directly affect the box office. I certainly don’t think it was that they gave a shit about James Gunn not being representative of their values as a company. I mean, James Gunn does a web series called “PG Porn” that is crude and vulgar as shit. He’s been doing it since 2008. I guess no one at Disney knew this, or maybe didn’t care?

I guess my final conclusion from this is the most pessimistic: the hard-Left kind of appears to think that pedophilia isn’t really that big of a deal, and that attitude has emboldened these sick fuckers to be completely causal about it. I thought that child molestation was so fucking repugnant that it was universally understood to be the sickest, lowest form of human evil. Even in a prison filled to the brim with the worst of society, the prisoners have an unspoken code that the diddler is the lowest of low and should be beaten to death in the shower at the earliest opportunity.

The Left seem to be more sympathetic to the plight of the diddler. There have been a few articles written (one by Salon that’s particularly nauseating) suggesting that this is something they can’t help (as if that even fucking matters) and that they need understanding and compassion because of the terrible social stigma they suffer. There are parents letting their eight-year olds dress in drag and dance on a pole for leering adult perverts, and this is applauded as progressive. I’m sure that if an eight-year old’s concept of sexuality is developed enough to choose their own gender, or dress in drag, then surely they are able to enter into a loving, consensual, sexual relationship with an adult man, right? 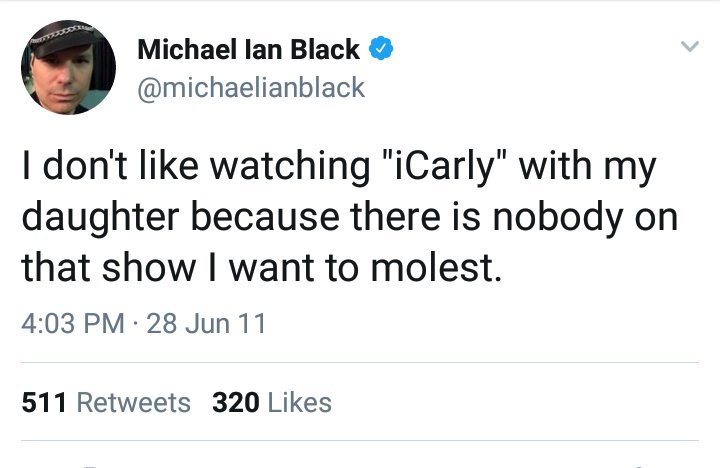 Look at all the support James Gunn has gotten for this from his celebrity pals. Michael Ian Black and Patton Oswalt obviously don’t think it’s a big deal to “joke” about it. How do you think this would’ve played out if James Gunn had hundreds (maybe thousands) of tweets like “Black Panther was so good I burned a cross in the black neighbor’s yard”, or “Getting my hanging rope ready, tying a noose is fucking hard!”  Or how about animal cruelty? “Drowned some puppies by the river” or “Emptied a can of hairspray into a cat’s face; ever seen a pussy burn?”  How forgiving do you think the Left would be about this kind of “edgy” humor?

Shit, they just put a guy in jail in England for teaching his girlfriend’s pug the sieg heil and to respond excitedly to the phrase “gas the Jews”. I’m sure right now some survey is being conducted in Marxist universities around the country that shows the students think being racist is worse than being a pedophile. This world is all fucked up people. The sad truth is that this problem is epidemic in this country (and the world) and nobody left of center seems to be too concerned about it. For all I fucking know, whoever Disney replaces Gunn with will be a rapist/pedo too, so does it even fucking matter? That’s it, ok, enough, I’m going to my bathroom to puke all these shit-covered black pills up and going to bed. I’m sure Guardians of the Galaxy vol. 3 will be awesome . . .