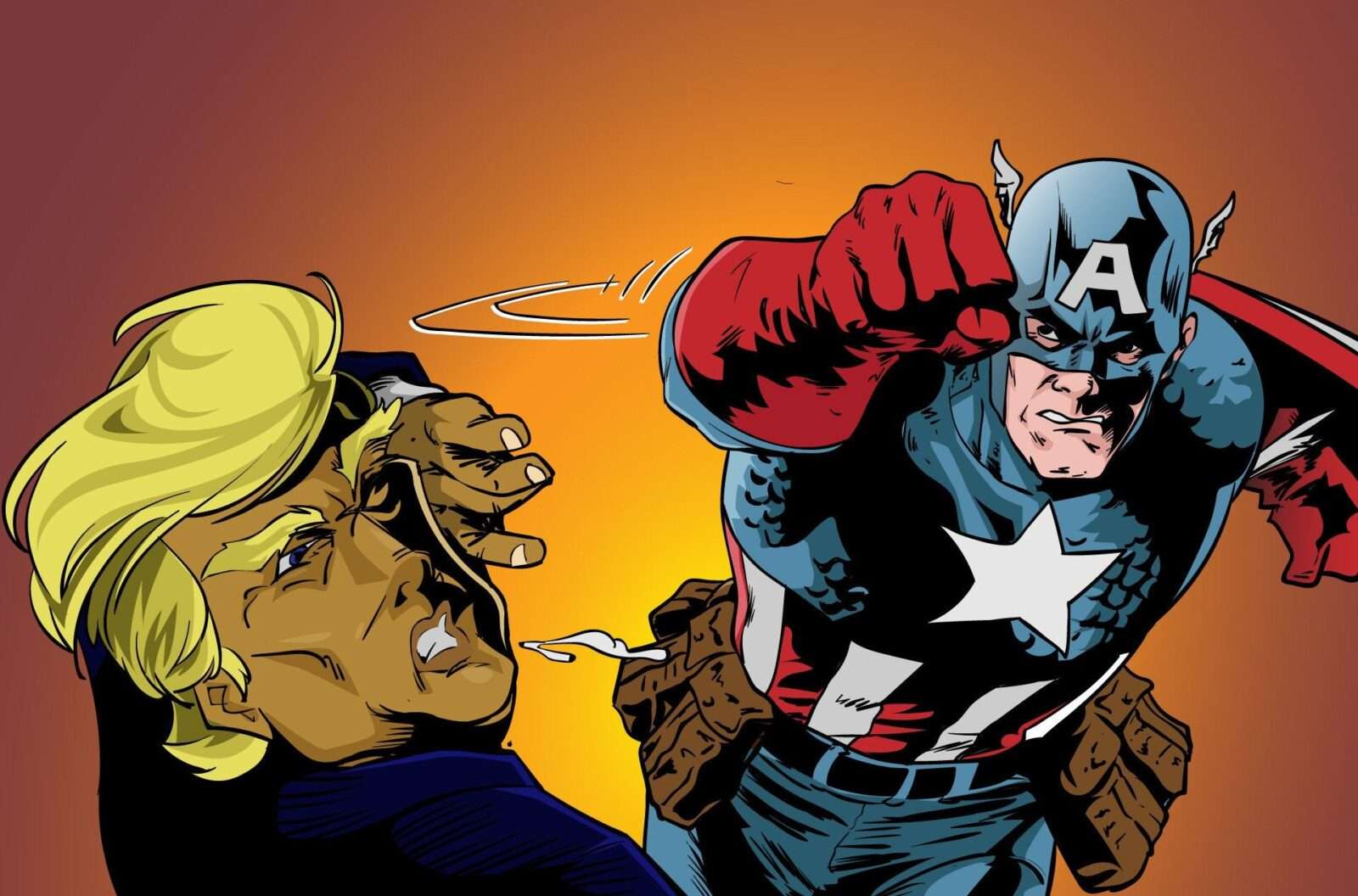 It’s very sad when the descendant of a legend goes along and serves as an establishment tool, or what Vladimir Lenin called “useful idiots”. Yet that’s exactly what Neal Kirby, the son of Jack, did when he gave CNN’s Jake Tapper exactly what that awful news station wanted to hear, taking Captain America and making this fictional creation and politicizing him even more than the rioters at Capitol Hill allegedly did, to say nothing of seizing an opportunity to attack Donald Trump:

Neal Kirby, the son of late Captain America co-creator Jack Kirby, has condemned the rioters who stormed the U.S. Capitol last Wednesday. In a stirring statement, Kirby also slammed insurrectionists who donned symbols of the Marvel superhero, writing, “these images are disgusting and disgraceful. Captain America is the absolute antithesis of Donald Trump.”

Neal Kirby, the son of Captain America co-creator Jack Kirby, was distressed to see some of the January 6 terrorists/rioters wearing shirts with versions of his dad’s creation corrupted by the image of the outgoing president. His message to them: pic.twitter.com/RTH9UNs491

It’s very sad the junior Kirby (who himself is an old man today, I know) is another example of an ignorant, uninformed leftist. On which note, I think it’s crucial to look at who’s mentioned in the following paragraph:

“My father, Jack Kirby, along with his partner Joe Simon, created Captain America in 1941. Perhaps the most iconic symbol of patriotism since the ‘Spirit of 1776,’ Captain America has stood as a symbol and protector of our democracy and the rule of law for the past 79 years,” Kirby wrote. “He was created by two Jewish guys from New York who hated Nazis and hated bullies. Captain America stood up for the underdog, and, as the story as written, even before he gained his strength and process from Army scientists, always stood for what was righteous, and never backed down.” 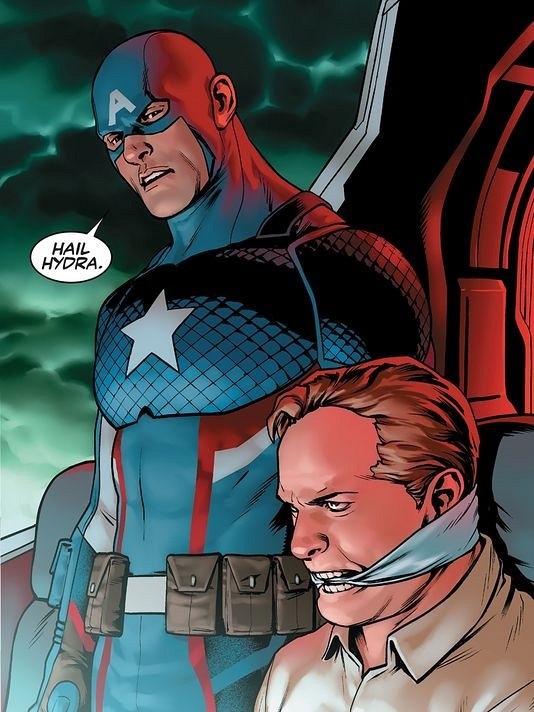 Does the junior Kirby know Simon was right-wing, and was against Osama bin Laden? Come to think of it, where was this guy Neal when Axel Alonso and Nick Spencer turned Steve Rogers – however momentarily – into a Nazi-Hydra hybrid? How is it possible somebody like this can only speak out when a real life political situation in the District of Columbia occurs, yet has nothing to say about Marvel’s vicious abuse of his own father’s co-creation, which has been going on for nearly 2 decades now? Much as I admire pere, I cannot admire fils, because it’s clear that Neal’s the kind of man who’s not being altruistic, and is likely unwilling to consider the evidence turning up that Antifa infiltrated and caused the riots. If Captain America was created to hate Nazis and bullies, surely he’d be created to hate Islamofascists and Antifa, but under SJW-Marvel, that’s haram (taboo). Worst is how a CNN reporter who meddled in elections is milking this for all it’s worth to suit the left’s cause, not because they’re actually fans of Cap.

Adding to the disgust is propagandist Noah Berlatsky, who wrote the following in the Observer, and there’s some mind-boggling details finding their way in here:

And yet, American ideas about heroism and Nazi ideas about heroism shared certain preconceptions, and you can see those, disturbingly, in Captain America too. Steve Rogers in the original comics was a weakling unfit for military service who volunteered for a military super soldier serum program. The story of an inferior specimen transformed into a blonde-haired, blue-eyed perfect specimen of manhood uneasily evokes Nazi doctrine about eugenic unfitness and Aryan perfection.

More than that, Steve is not himself Jewish, and is, inevitably, white.

Is this serious? Is he saying the ethnic race originally hailing from the west end of Asia isn’t white?!? Well, it gets worse:

I say “inevitably” because virtually all popular superheroes in the 1940s were white, like all American heroes at the time. To represent America at the dawn of the superhero, the hero had to be a white Christian man, because America, like Nazi Germany, believed in the physical and moral superiority of white Christian men. A superhero could hit Hitler on the cover of a comic book in the early 1940s only if that superhero shared a bunch of Hitler’s ideas about who was virile and heroic. It would take almost 30 years for there to be a mainstream Black superhero; Captain America’s sort-of partner, sort-of sidekick, the Falcon, created in 1969 by Stan Lee and Gene Colan.

Captain America, and America, were complicit in white supremacist ideology, which held that the best of America, and that the most super of heroes, had to be white. Nor are Trump supporters the first ones to recognize that Captain America is, in some unfortunate respects, on the side of an American Way that doesn’t have a lot to do with justice or truth. Comics creators over the years have frequently examined the downsides of America by examining the downsides of Cap’s legacy.

One of the most interesting and powerful Captain America comics is the 2003 miniseries Captain America: Red, White & Black, by writer Robert Morales and artist Kyle Baker. The comic is set in 1942, shortly after Steve Rogers has become Captain America, and the super soldier serum has been lost. In a plotline inspired by the racist Tuskegee syphilis experiments, a group of Black soldiers is ordered to be test subjects to rediscover the serum. They all die from hideous side-effects, except for Isaiah Bradley.

Well…so Berlatsky condones that loathsome, nasty desecration of Kirby and Simon’s creation. This is certainly telling. Obviously, he doesn’t even consider that there’s Slavic peoples who have blonde hair too, and even some people in Britain and Ireland, where Steve Rogers’ ancestry came from, have blonde hair as well; certainly in the former. How fascinating somebody’s hell-bent on damning all men – and women – with blonde hair as abominations. He seems to miss that Superman was dark-haired, and was far from being portrayed as a devout Christian. And the Golden Age Flash (Jay Garrick)’s hair was brown. That aside, as a white man myself, I’m offended if Berlatsky’s saying I’m not. Obviously, he doesn’t think Kirby/Simon are either. This is just plain sick. And then, lo and behold:

A more recent, better known, and more controversial storyline is the 2017 series and crossover Secret Empire, by writer Nick Spencer. In Secret Empire, the nefarious Nazi collaborator the Red Skull uses the reality-altering powers of a device called the Cosmic Cube to change history. He tweaks the past so that Steve Rogers was recruited early in his life by the Nazi-like organization Hydra. Captain America therefore becomes the ultimate sleeper agent: a fascist plant at the heart of the United States. It’s as if masked American movie heroes didn’t start out fighting fascists, but instead sallying forth to commit racist murder—which of course is exactly what they did in The Birth of a Nation, the celebrated 1915 film which celebrates the Ku Klux Klan. 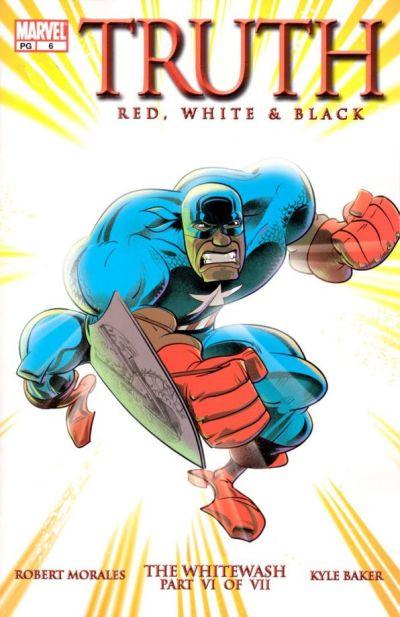 This is just as repellent, because he’s not really condemning the story, seeing as he didn’t condemn the Morales/Baker mess. Yet he tries to worm his way out of this atrocious propaganda by telling us next:

Both Red, White & Black and Secret Empire end on somewhat positive notes. In the first, Steve Rogers shows up to bring Bradley’s white supremacist American tormentors to justice and reassure readers that America isn’t like that any more. In the second, Cap is restored to his non-Hydra self. In comics or Hollywood films, you can fix America’s history of racism, fascism and hate with a few well-turned phrases and a deus ex machina or two. Not so much in real life.

None of this is to say that Captain America is really a white supremacist icon. Captain America isn’t really anything. He’s a symbol and a story, which can be used and abused in various ways by various people. He means what we want him to. Neal Kirby is doing a service by trying to wrest him from the grasping, small-fingered hands of the worst people on earth.

But Jim Crow is older than the Falcon, and racism is older than Captain America. Jack Kirby put a flag on his hero to fight for the best in this country. But it’s hard to reference the best without invoking other aspects of the nation as well. We have to do more than just assert that Trump isn’t Captain America. We need to create a better country than Jack Kirby’s, or than ours, if we don’t want Trump to wear that flag.

I think that’s saying Kirby was just a naïve man who didn’t know diddly squat about his own country, which, according to the twisted mind of Berlatsky, was irredeemably racist and other degrading elements, and he doesn’t even consider Cap a good form of escapist adventure. By that logic, even Spider-Man wasn’t, nor were Iron Man and the Avengers. And don’t be shocked if he’ll be damning Stan Lee next for creating his take on Thor in the Silver Age, based merely on the God of Thunder’s having blond hair. If Berlatsky’s website, Hooded Utilitarian, is still in publication, I won’t be linking to it anymore, and haven’t for a long time anyway, because this is simply unbearable. 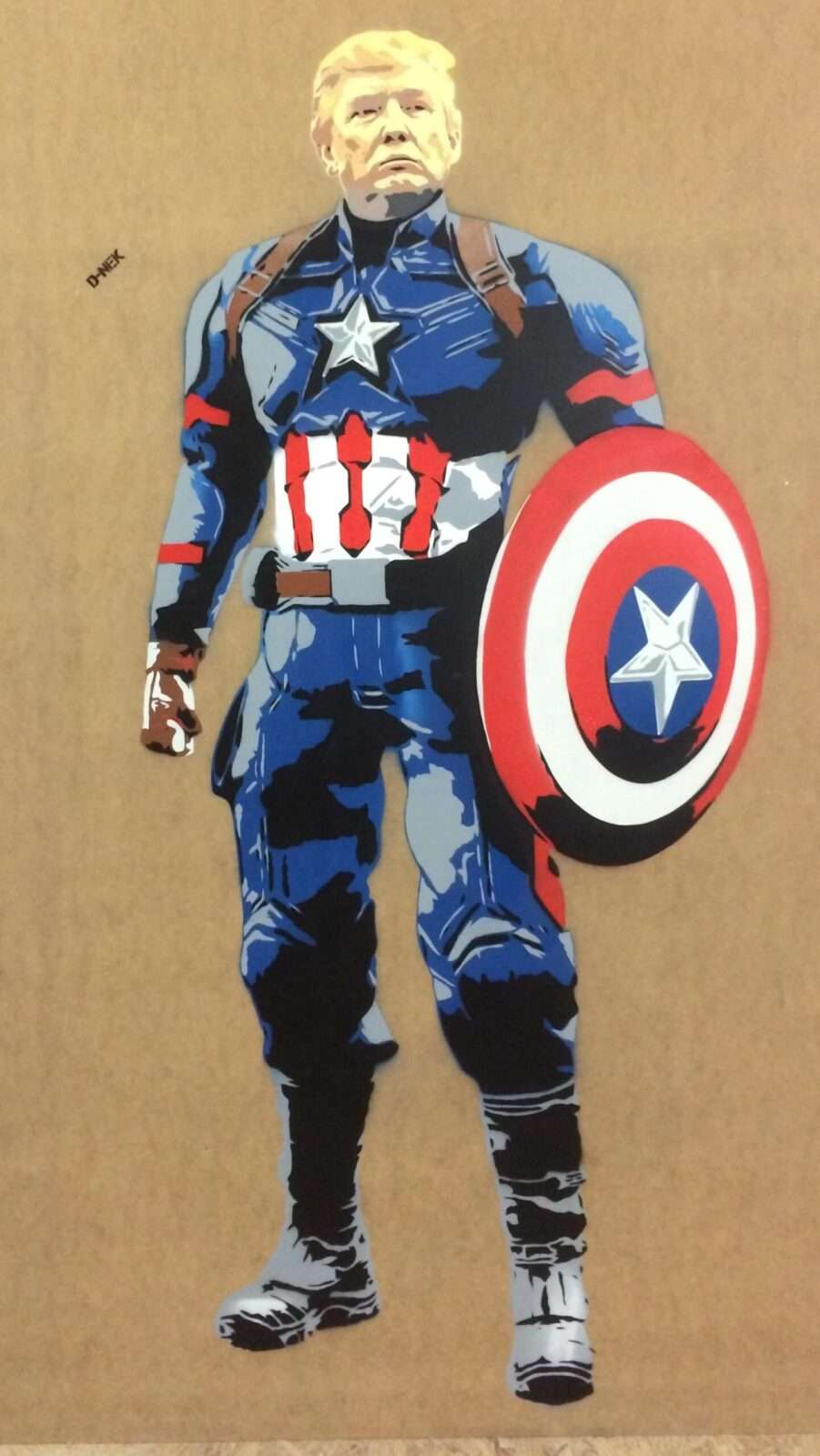 He says he admires Neal Kirby for speaking out against what the left wants us to believe were right-wingers on a rampage, yet he throws Jack and Joe’s co-creation under the bus anyway, and chances are the junior Kirby will never condemn him for insulting Jack’s hard work. It’s very sad when the descendants of famous people turn out to be tilted towards PC ideologies.