Is John Connor the Latest Male Hero to Fall to Identity Politics?

Official synopsis: More than two decades after the events of Terminator 2: Judgment Day, Sarah Connor sets out to protect a young woman named Dani Ramos and her friends as a liquid metal Terminator, sent from the future attempts to terminate them.

It looks like identity politics may have succeeded where Skynet and it’s Terminators never could: killing John Connor. At least, that’s what the latest talk online would lead one to believe after the release of the first teaser trailer for Terminator: Dark Fate, the sixth film in the Terminator franchise. And who’s to doubt it at this point? John is conspicuously absent from not only this trailer, but from ALL promotional materials up to this point:  the casting announcements, the posters, even the promo blurbs seen in the featurettes from Director Tim Miller (Deadpool) and Producer James Cameron (Writer/Director of Terminator and T2).  Not one glimpse or mention, and he is arguably one of the central characters, if not THE central character, to this franchise.  Or he used to be?

In recent years, there seems to have been a push to diminish or outright replace male heroes with female versions, who, let’s be honest, are very often simply male roles played by females with cries of “diversity victory” all round. Films such as Ghostbusters (2016), a film that was a failure on multiple levels financially and critically, and Star Wars: The Last Jedi, which was extremely divisive and much less lucrative than The Force Awakens, took great strides to not only put females front and center (which is fine, by the way, when done for the right reasons) but also went out of their way to write every single male character as either toxic, a buffoon, or the villain.

Audiences can be forgiven if they’ve grown a bit cynical toward Hollywood in recent years, as Hollywood seems to have been determined to disregard and disrespect large swaths of them (and the characters they’ve grown to love) to appease certain political factions who don’t care about art but only numbers under the guise of “equality.” The Last Jedi and Ghostbusters 2016 are just two of many recent examples of this phenomenon.

It is, unfortunately, looking like Terminator: Dark Fate may be no different. The ad campaigns thus far have done little to dissuade anyone. From the teaser poster showing three leads, all female (an older, battle hardened Sarah Connor, a new girl that needs protecting from her would-be metallic assassins named Dani, and her female kinda-sorta human/terminator protector, Grace) to James Cameron weirdly promoting this as Linda Hamilton’s Expendables movie (‘kay?), to the trailer itself, which shows the females in the thick of the action with a brief, meant-to-be-intriguing-but-was-just-kind-of-meh Arnold shot, it would seem the crux of the ad campaign is less about “Check out this awesome new film we’re making” and comes across as more “Girl power, amiright ladies?!” 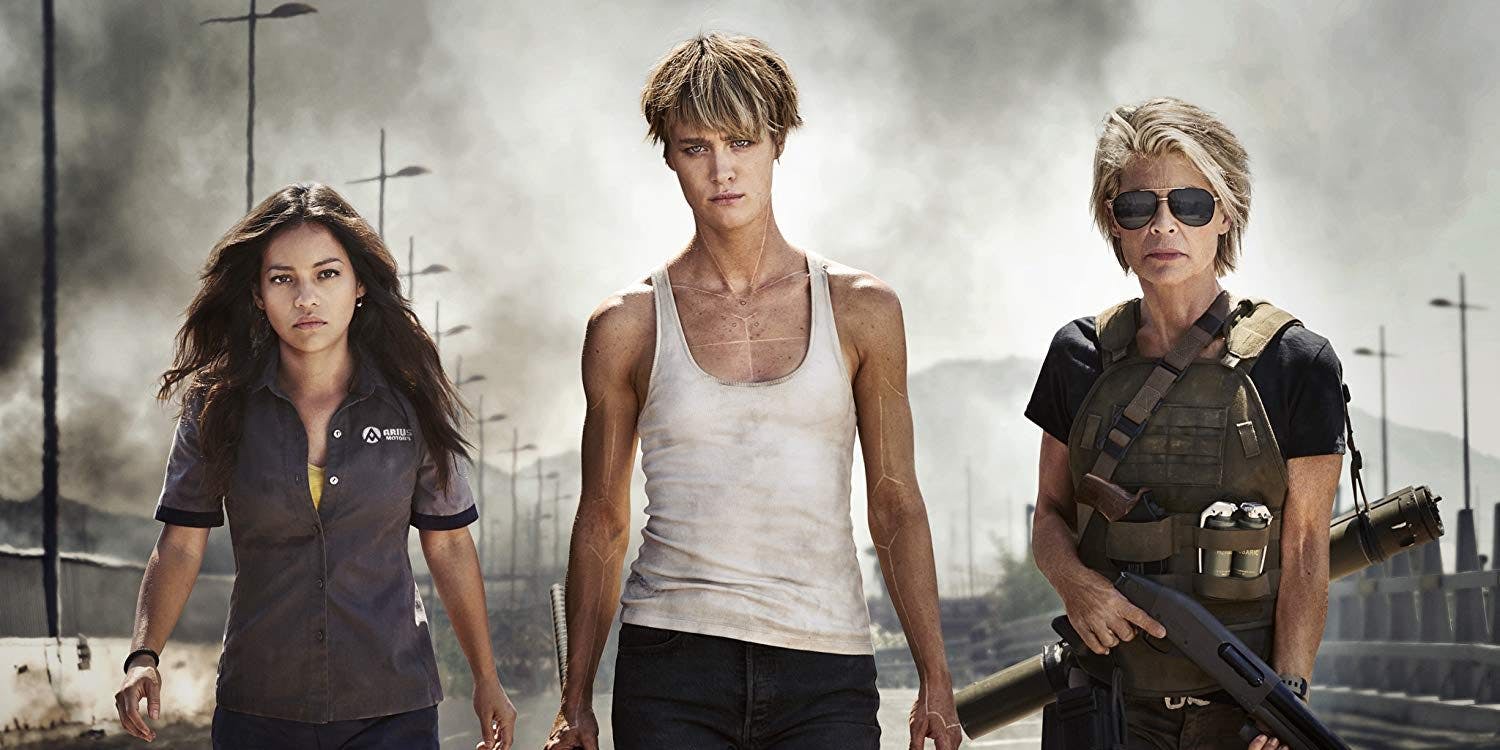 The Terminator Fans quotes James Cameron as saying this film will serve as a “reinvention” of the series, “passing the baton” to a batch of new characters, apparently at the expense of the legacy ones.

Now, let it be known that I am a Terminator fan. And not just a fan, but a big fan. How big? Some fans grew up as “Star Wars fans,” some “Star Trek fans.” Me? I was “The Terminator” fan. I can’t really go into why for the sake of brevity, but the films, the comics, the soundtrack, all of it just captured my attention when I was a kid and wouldn’t let go. I mention this because I’m the guy the return of Linda Hamilton as Sarah Connor is supposed to EXCITE. I should be throwing my fist up and saying, “She’s BACK. FINALLY.”

But I’m not. I confess I feel conflicted over that apparent contradiction, but it’s there just the same.

In all fairness, it should be noted that this film is the THIRD time the series has sought to be rebooted. If you count Terminator 3 as an attempt, that makes it the fourth, and three of them, thus far, were failures. There are only so many attempts by filmmakers that fans can bear before they finally start getting weary of giving the property chances over and over again. There are only so many times the hope can be stirred up to be let down again. How does that Proverb go? “Hope deferred makes the heart sick.” And people certainly seem to be sick of the Terminator.

I know this isn’t the primary problem for myself personally. Like I said, I’m a big fan. I own all the movies (yes, even Genisys). Special editions when I can get them. I have the tie in books, the comics (and the graphic novels of those same comics), the video games, T-shirts, posters, the works. It is one of the few properties for which I am an actual collector. I’ve been rewarded numerous times by some of this material, and I’ve been let down a bunch, too. Genisys was definitely one of the worst offenders, but even that wasn’t as bad as many make it out to be. It was just so HOMOGENIZED and bland. And stupid. Okay, it was pretty bad, but it had good moments. That were overshadowed by all the bad and stupid. Okay, digressing….

The primary problem with Dark Fate is the feeling like the entire story might have been co-opted by identity politics, the crux of the story gutted to give a “fresh take” to the ladies. I never thought I’d say this, but I almost wish Terminator: Genisys had just been the reboot they had discussed making initially. Hell, I would have rather seen Terminator Salvation’s arc finished. Those would have at least kind of kept the central story intact.  I would have rather seen those than see the series finally fall apart with its creator’s name atop the credits.

As it stands, Dark Fate presents us with no John and with people asking Sarah Connor “Who are you?” Rumors (mind you, at this point, rumors) have been spreading that Skynet is no more. John Connor is no more. Therefore, Sarah Connor’s main role is no more. And her part to play in this was no small feat, which was that of raising the man who would go on to rally the human race against the machines. She would protect him and train him and equip him for the task. She is and always was the backbone of the future’s salvation. And it looks as if that legacy is being stripped away from her before our very eyes by making changes to the central story in the name of “female empowerment.”

Ironic, isn’t it? Whilst this commentary might prove to be totally off, wouldn’t it be sad if we are about to get yet another retcon of a story we love in the name of “diversity” that steps on the backs of the legacy characters so many of us know and love? Especially from one of the greatest filmmakers of our time, who has done more for establishing women in the forefront of franchises typically known for male leads than almost any other out there? If they strip this away from John Connor, they strip it away from Sarah Connor, too. It saddens me to think that I will have to walk away from a franchise that I have cherished for decades because it was one more thing ruined in the name of social justice. But I will if I have to.

Who knows?  Maybe they’ll end up pulling all of it off.

In my next piece, I’ll discuss the new trailer a bit more in depth, the new premise, and the ever slimming possibility that these rumors are all wrong.

I’m a writer who likes to talk movies and comics. I used to make YouTube videos and still fight the urge to make more. Follow me on Twitter @eric_talks.