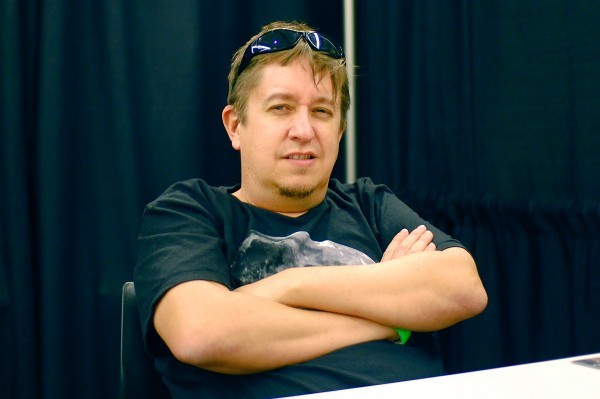 John Layman is an Eisner Award nominated comic book writer, probably most known for writing Chew, published by Image Comics. However, when he isn’t writing comics, he seems to be very prolific online. It’s some of these internet ramblings that have caused me to pause and ask the question: “Is John Layman okay?”

To understand the question, let’s begin with New Year’s Eve 2018. Bleeding Fool collected several 2019 predictions and some favorite moments from a few of our contributors in our annual New Year’s Eve post. Although no one in the article mentioned any of John Layman’s projects, or even Mr. Layman (a.k.a. themightylayman), the Trump-hating writer chimed in with an unprovoked, offensive retort to no one in particular in the comments section at the end of the piece. 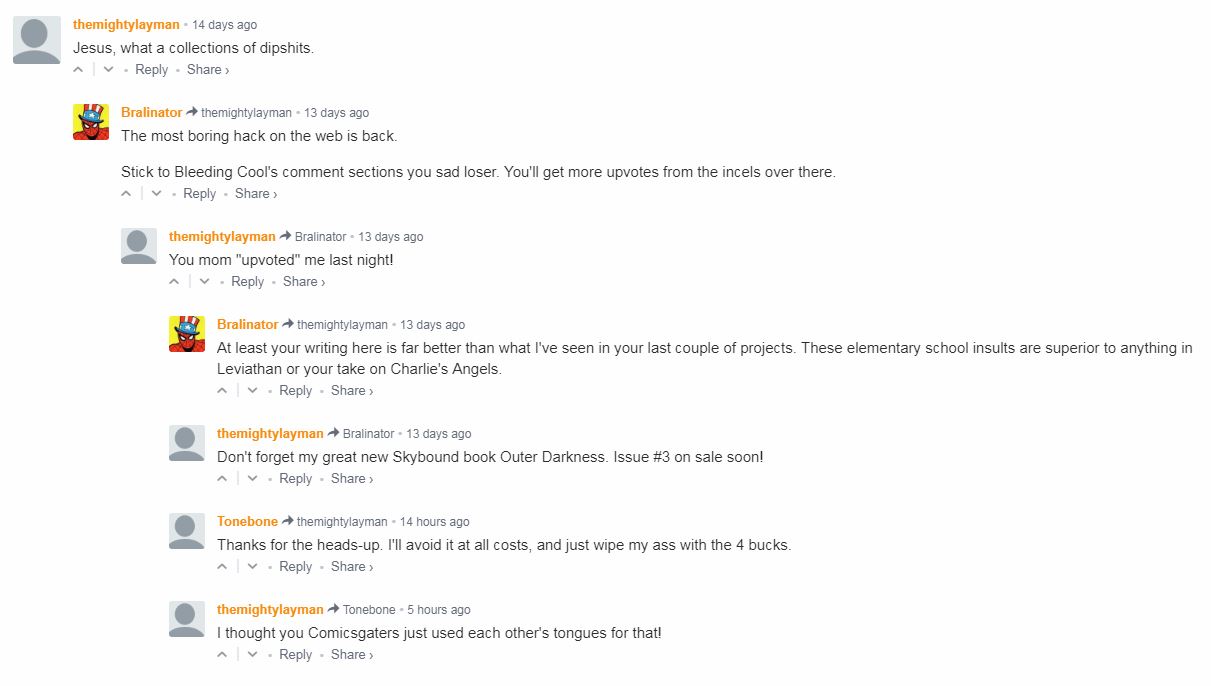 Up until the comment above that he posted, no one had never mentioned John Layman on our website. So naturally it seemed a bit weird that he would chime in just to insult our little society of contributors in the comments section of an article where he wasn’t even being mentioned. It became even more odd when he then returned two weeks later to add another insulting remark, beginning what appeared to be a very unbecoming grade-school level insult fight with other commentors.

This peculiar behavior motivated me to dig a bit deeper into his online public history – which in “layman’s terms” means I clicked on his name to see if it was really him. This led to his public Disqus account where anyone can see all his comments via Disqus’s comment platform. I’ve included some of them below.

Further inspection revealed that Mr. Layman frequents the Disqus comments sections of Bounding Into Comics, Bleeding Fool, and Bleeding Cool, respectfully (or disrespectfully depending on your POV) and the modus operandi is generally the same on each website. 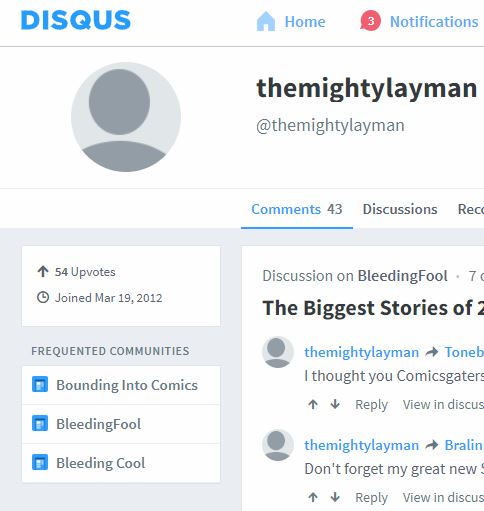 Other than Twitter, I didn’t bother to review any additional comment sections, social media sites, or forums he might also regularly troll, but judging by his Twitter account, it’s easy to see that it’s not just the comments section where Mr. Layman goes after comic fans and comic book professionals that he disagrees with. His public Twitter feed is riddled with smug, obscene, and hateful rhetoric, and ample amounts of typical anti-Trump politics, all wedged between smatterings of the occasional reminiscing and normal self-promotion that fans would normally expect from professional comic book creators. 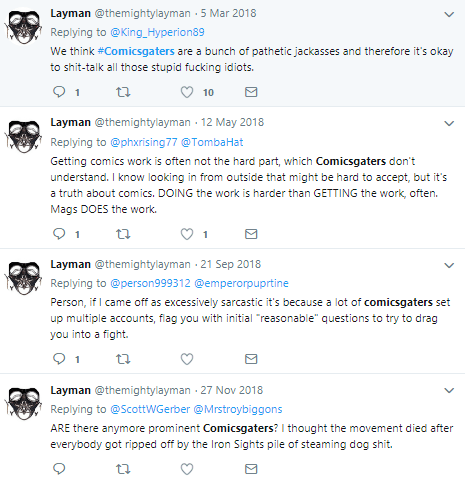 I wonder if John Layman considers this to be a winning marketing strategy or a productive use of his time? Does he realize that even comic book buyers who don’t know anything about “comicsgaters” are also likely to frequent the comments section and see his wildly inappropriate ramblings and get a sense of his malcontentedness? And at the very least, how unoriginal his writing truly is? 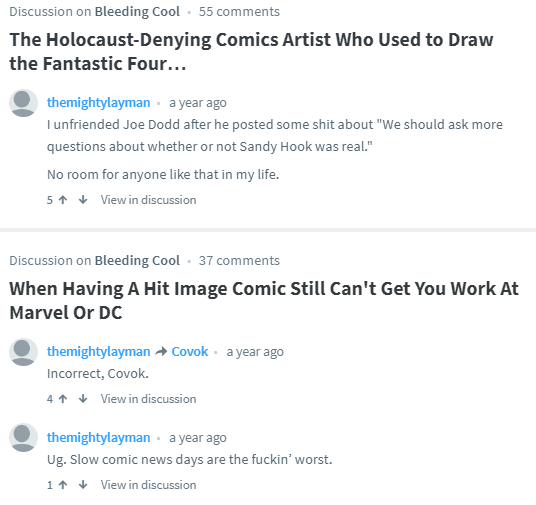 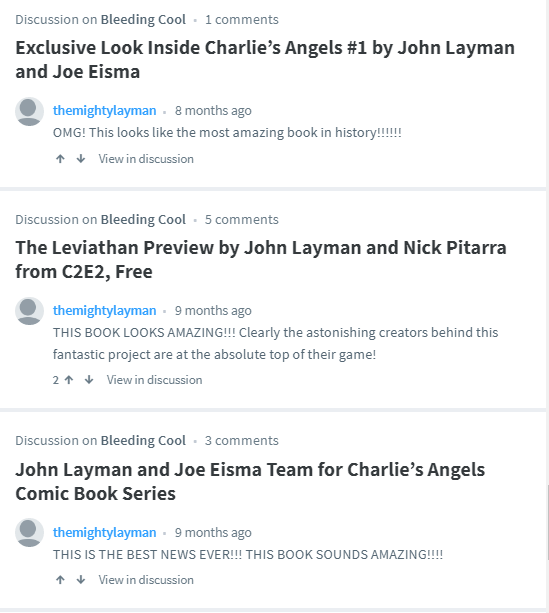 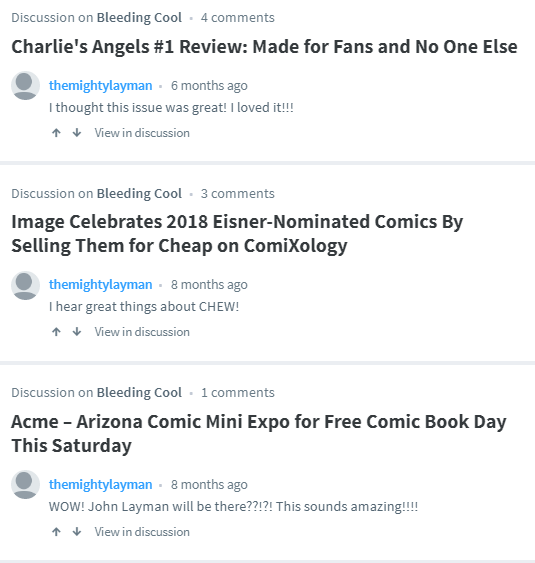 So I am really asking, does this seem like healthy behavior to you? I suppose some of these comments would be funny if they were part of some back and forth exchanges with fans that were conducted in a tongue in cheek fashion, but they don’t seem to be that at all. Most are written in third person, look to be very immature, and border more on self-parody rather than self-promotion. These posts resemble the ramblings of someone who may even be a bit off-balance, especially when you see him going after several comic book professionals that promote different political viewpoints, perspectives, or religious philosophies than he does. 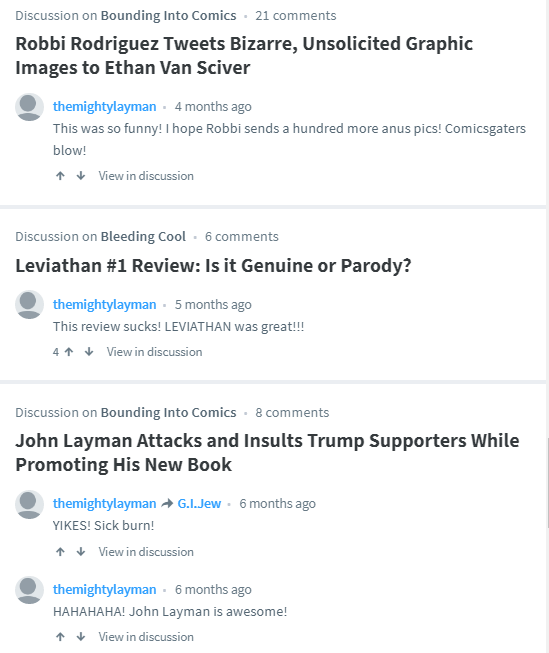 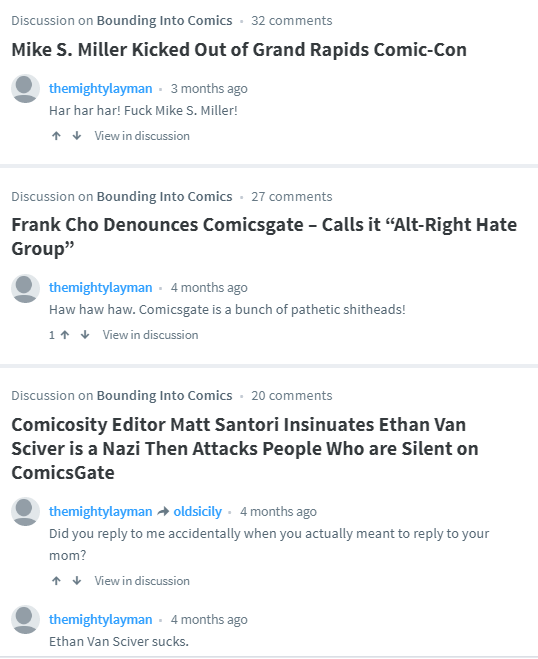 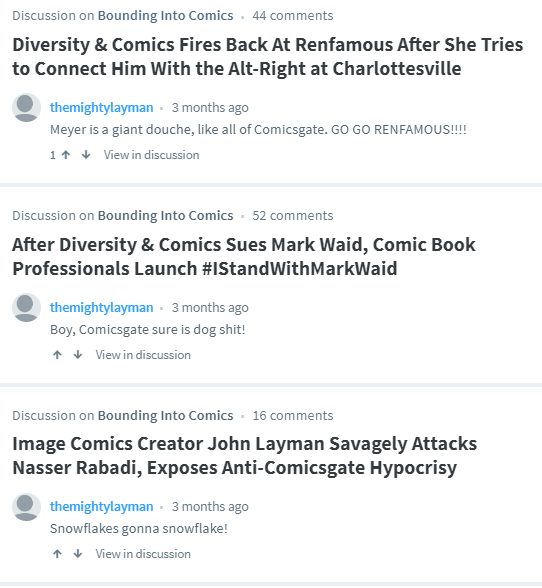 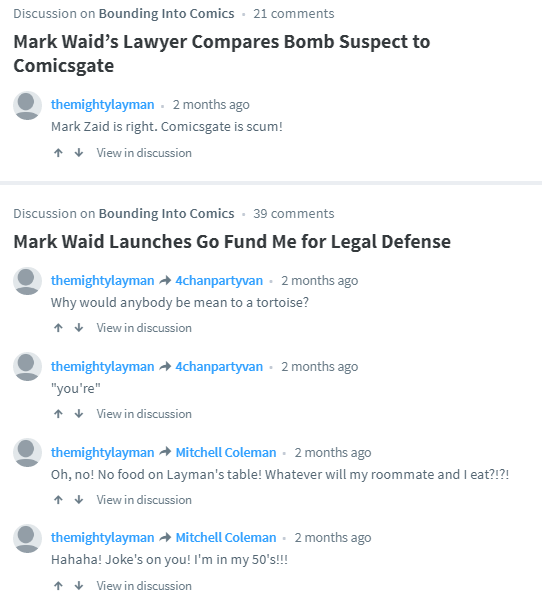 Furthermore, when confronted by regular comic book fans who question the wisdom of him being so publicly and virulently antagonistic towards potential comic buyers, Layman regularly acts like he shouldn’t have to bother being civil, polite, decent, or respectful in any way. Instead, the briefest perusal of his comment history shows him zealously trying to discredit those comic fans – as if they are some sort of danger to the comics industry while presuming that there are very few of them out there to begin with.

How odd that he would even bother to regularly attack them if, as he suggests, they are truly such a tiny minority. 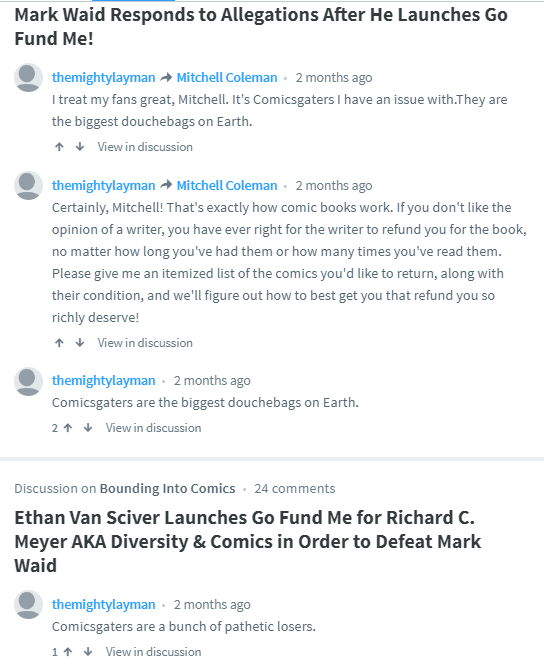 In case you didn’t know how John felt about the comicsgate movement  (a customer revolt of many thousands of comic fans who universally love comics and want to see partisan progressives stop using their beloved hobby to fight their political and social battles), Layman repeatedly makes the same types of virtue-signalling comments over and over.

So, I ask you, is this the healthy activity of the mentally sane? 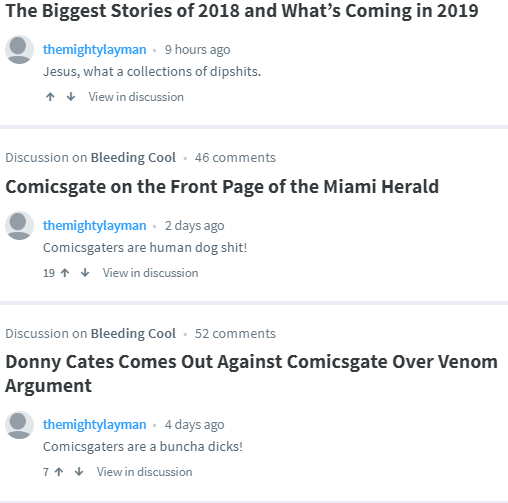 At his peak, Layman last wrote a couple of Chew one-shots for Image a few years ago. But beyond these childish tweets and boorish comments, he hasn’t actually written anything for DC Comics or Marvel Comics in nearly 5 years. That said, I expect him to be welcomed back into the fold very soon now that he’s made his public anti-ComicsGate stance so widely known. It’s a good thing those useless social media policies at the BIG 2 have gotten so lax over the years, otherwise the endless insults he spews at comic fans on a regular basis might prevent him from getting work there (see Chuck Wendig).

While many comic creators these days come out unabashedly against President Donald Trump or his policies, few reach the level of vitriol and hatred that creators like Layman do. I do find it fascinating that he (and others) apparently believe that insulting the 62,984,825 Americans that voted for Mr. Trump, when your comic books only sell around 8,000 copies each month, is a savvy business move.

Well, hope you enjoyed this “slow news day” post. In the meantime, you can pick up Layman’s latest works “Outer Darkness” and “Charlie’s Angels” at fine local comic book shops everywhere. I’ll see you in the comments section, John and until then I hope that you eventually get the help you need in order to conduct yourself in a more dignified and civil way when engaging with right-leaning comic fans with whom you disagree. 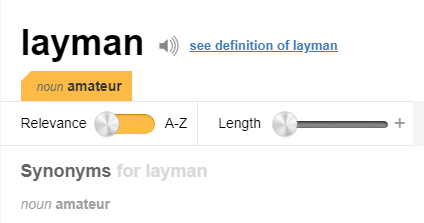