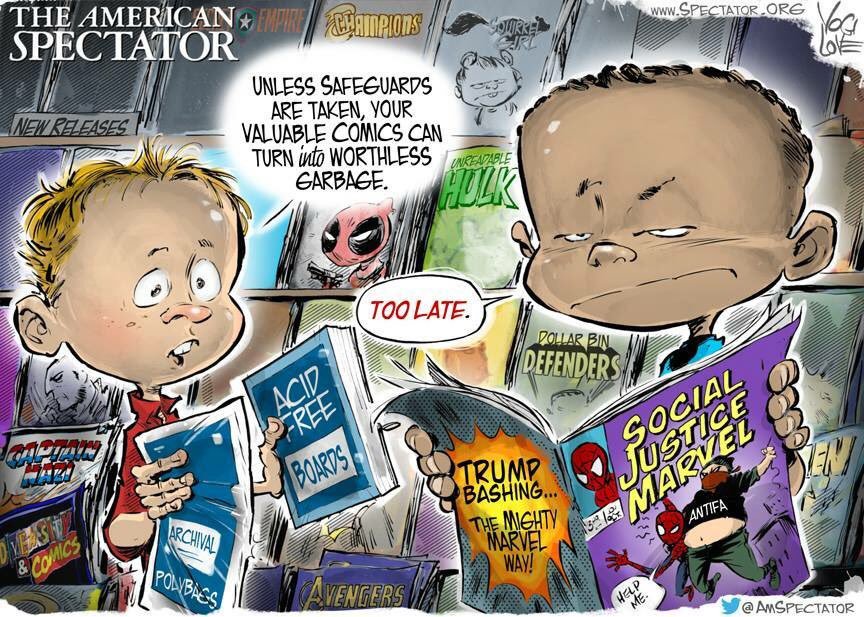 Michael Brush, writing for Market Watch, recently posited the question “Does the world of comic-book superheroes have a diversity problem?” and he makes the case that, in spite of denials from Marvel Comics, it appears they do.  He goes on to further show why this question matters a LOT to investors.

So if the new wave of “diverse” superheroes has caused the recent slump in comic-book sales growth, that’s a trend investors need to sit up and notice.

In the past few years, Disney’s Marvel Entertainment has rolled out an Afro-Latino Spider-Man, a Muslim Ms. Marvel, a female Thor, a gay Iceman, a Korean Hulk, an African-American female lead in Iron Man, and a lesbian Latina America Chavez.

Fans accustomed to more “traditional” characters may have come down with diversity fatigue. And they could be walking away in protest. Consider the following.

• At a Marvel meeting with retailers and distributors during the New York Comic Con last October, several comic book sellers pushed back hard on diversity, blaming it for slumping sales. The meeting quickly got ugly and Marvel shut it down, according to ICv2, an online trade publication that tracks the business of “geek culture.”

Unlike most books which you can buy practically anywhere, comic books are still distributed largely through specialized stores. So this kind of feedback from specialized retailers is significant, even if it’s anecdotal. Marvel doesn’t disclose sales.

• Video bloggers on YouTube channels dedicated to diversity in comics don’t like the changes one bit. “We just want our old characters back,” says one. “Give us all of them back. Your sales are pathetic.”

Critics claim “social justice warrior Marvel” is forcing its politics on fans, abandoning many of their popular characters, and driving away readers.

To be sure, other factors could explain the sales drop. Maybe comic-book writers are simply producing blasé story lines. Because comics companies don’t break out sales data by title or character, it’s unclear which characters aren’t selling as well.

But if comic-book publishers are hurting themselves by tangling with the tricky issue of diversity, the industry could risk a sustained sales slump.

In fact, 2017 sales figures compiled by Comichron and ICv2 were NOT good. With OVERALL North American Market size, including both print and digital estimates shrinking to a smaller amount than 2016 and even 2015 figures. These estimates matched the shrinking size of thetrade paperback sales as well. Even worse, dollar sales for all of Diamond’s comics were behind even 2014’s sales figures according to Diamond’s reports. 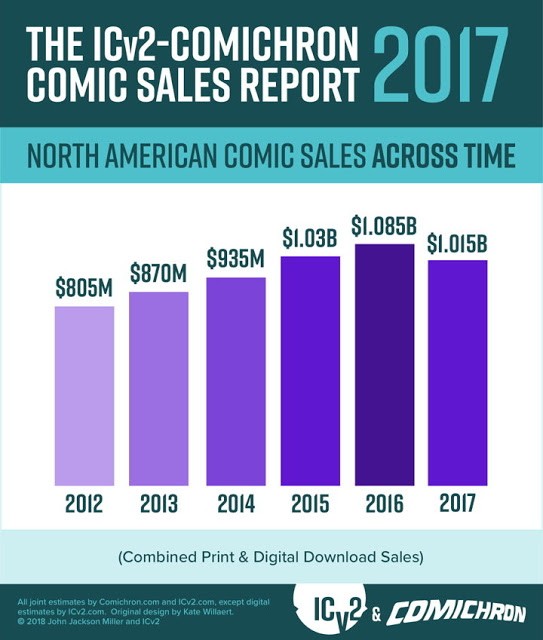 ICv2 President Milton Griepp further described how local comic shop sales fell 10.5% in the first nine months of 2017, when compared to 2016. These local shops account for well over half of all comic sales.  Griepp admitted that “there’s a struggle going on over what a comic book is and who the audience should be.”

In spite of this dismal performance, and the public outcry over cheap diversity in place of good stories, Marvel has doubled down on their insistence that the slump has nothing to do with diversity.

(Marvel) won’t back its (for diversity) case with sales trends on specific characters, and public information is spotty. But Marvel notes that its Muslim Ms. Marvel single-issue and trade paperbacks have been best sellers since the character’s launched in 2014…

So Marvel is sticking to its guns. “We have had such a great opportunity to create new and interesting characters that are truly representative of the way the world is,” says Sana Amanat, Marvel’s content development director who helped create Kamala Kahn, the popular Muslim Ms. Marvel. “We have made great strides, and we have more to go.”

If you’re quoting Sana Amanat, then of course she is willing to continue the diversity push until the company folds, if she has to. After all, it’s Ms. Amanat’s contention that Marvel should be positioning itself as a “lifestyle brand” instead of just a company that produces comic books for boys. 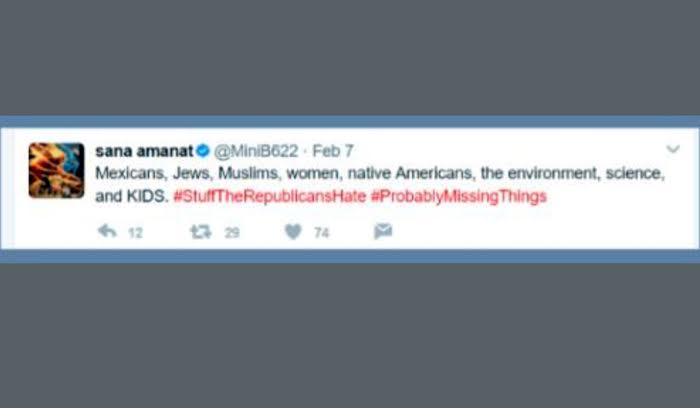 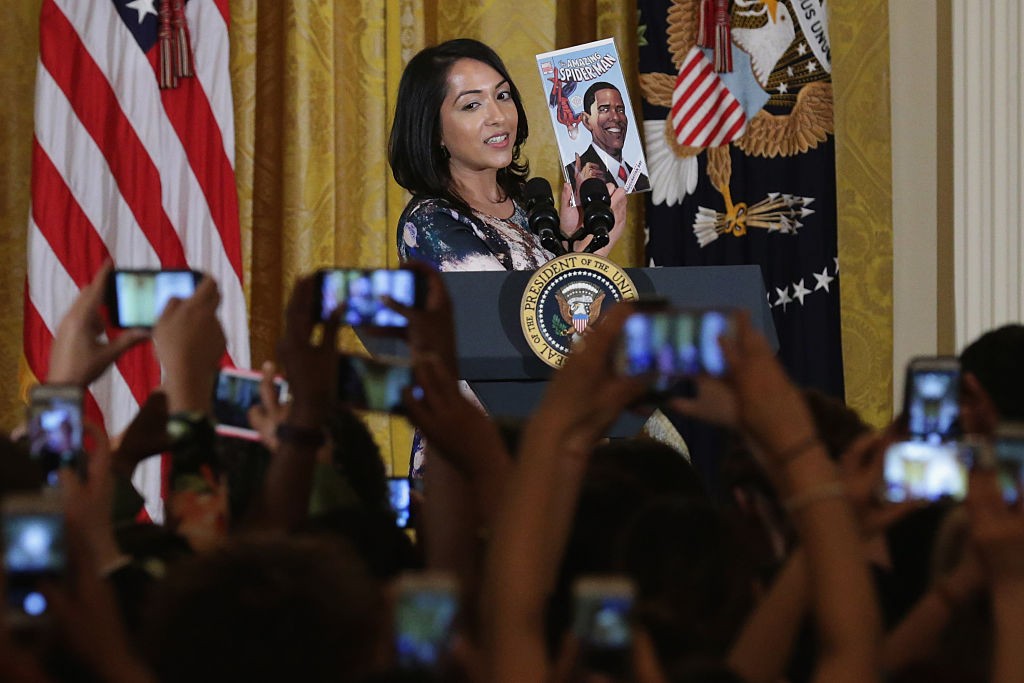 Michael Brush finally had this suggestion for C.B. Cebulski and Marvel Comics:

Your company, Marvel, loves to say it reflects the world outside your window. If so, why not step up and launch a series that features alt-right characters battling it out with social justice warriors? For better or worse, this theme has done wonders for cable TV news ratings.

Handled correctly, it could do the same for comic-book sales and, who knows, maybe teach us a lesson or two about how to cope with all the ugly and tiresome divisiveness.

Sounds like an interesting plan, but with the ratio of conservative creators versus liberal creators at Marvel and DC Comics these days, they would have to hire outsiders to provide a reasonable perspective from the conservative side of the aisle.

Maybe Marvel could extend an olive branch to Ethan Van Sciver and convince him that his lucrative half-million dollar haul from a single copy of his indie comic about a super powered frog would be worth giving up to fix things at Marvel Comics?

Don’t hold your breath. In the meantime, keep an eye on your investment portfolio as the next year of sales numbers starts to be compiled.