1979’s WWII heist-comedy Escape to Athena was probably aiming for a Kelly’s Heroes (1970) type vibe, but although Telly Savalas starred in both, it failed to match Kelly‘s heights, but that’s no reason not to check it out.

Directed by journeyman George Pan Cosmatos (The Cassandra Crossing, Rambo: First Blood Pt II, father of Panos, who helmed the unhinged Nic Cage picture Mandy), the movie was another failed attempt by British producer Lew Grade’s ITC to score an international hit. Grade had a very mixed record, with some entertaining pictures (Capricorn One, The Boys From Brazil, The Eagle Has Landed) but helluva lot of stiffs, including Raise the Titanic, The Legend of the Lone Ranger and…the Village People musical Can’t Stop the Music.

For Athena, Grade again used the template of stuffing the movie with stars and familiar, but in (relative) decline famous names.

Hence the ‘throw everything against the wall in the hope that something sticks’ casting of ITC stalwarts Elliot Gould and Telly Savalas (who both starred in Grade’s Capricorn One the previous year), Roger Moore, David Niven, Sonny Bono (!), Stefanie Powers, Claudia Cardinale and roguish Brit TV smoothie Anthony Valentine (Raffles). 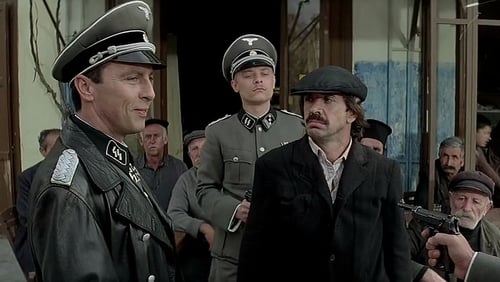 I won’t bore you with the plot intricacies (something to do with Byzantine treasure in a Nazi-occupied monastery, an Allied Invasion and Roger Moore’s venal Viennese commandant attempting to get his leg over with internee Stefanie Powers), but it zips along at a fair clip and provides a few smiles, if not outright belly laughs.

And Gil (Dr Strangelove/Star Wars) Taylor’s cinematography is pretty darned good, with the setting of the Greek island of Rhodes looking particularly stunning.

Composer Lalo Schifrin (Mission: Impossible, Bullitt) makes a decent fist of the score, throwing in some nice bouzouki touches for local colour – and the end credits feature the then popular UK soul band Heatwave, who also manage to throw in some Hellenic licks with their catchy playout Keep Tomorrow for Me:

You can watch Escape to Athena now as an Amazon Prime member here.