How the iPad May have Upended the Comicbook Industry 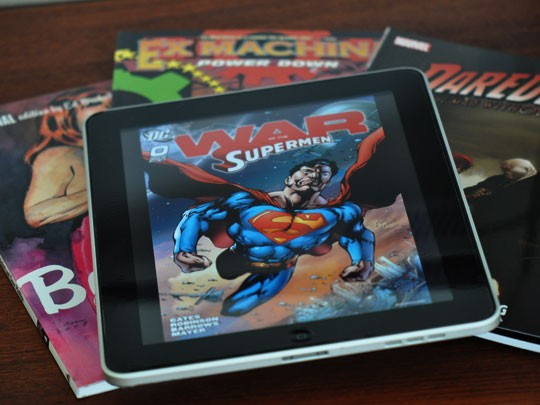 Lifewire tells that the iPad’s employment as a portable comics reader has provided an advantage to both readers, and artists using it for computerized illustration:

The iPad has upended the comics industry from both ends. Comic book artists use it to draw and paint and comics fans use it to read.

And unlike magazines and newspapers, which were slowly throttled by digital publishing, paper comics continue to thrive, and may even benefit from the extra exposure. One of the best iPad comic-reading apps is YACReader, which has a crazy new panel-by-panel navigator coming up in its latest version–a feature already found in rival readers, but YACReader’s is driven by AI.

[…] “People that might normally not venture into a comic bookstore can now look through multiple apps and sites to find the comics that would appeal to them,” comics fan and filmmaker Michael Ayjian told Lifewire via email. “This opens up the comics world to a wider range of creators that might not otherwise be published in a national outlet. Digital comics have created more opportunities in the comics industry.” I’m sure that’s so, although pamphlet sales are collapsing as a paper-based medium, seeing how low they sell. But why does the following seem to be their idea of the kind of story ideal for highlighting?

“The advent of the iPad has caused an explosion in the self-publication of comics on the internet, using the webcomic format. There is an unprecedented amount of freedom for independent comic creators to innovate on style and content,” Grace Moon Zao, author of illustrated lesbian love poetry site Sappho’s Dreams told Lifewire via email. “In general, this helps any creator whose comic style and content cannot easily break into the mainstream. I believe it especially benefits historically marginalized voices.”

Why does this kind of theme make a great citation, but not a webcomic about heterosexual romance and child-bearing? Unfortunately, this is what the MSM’s chosen to elevate to an even bigger deal than the size of the Atlantic ocean. And they continue to use a grievance-airing tactic, despite how the LGBT practitioners the author alluded to above have hardly been marginalized for a long time, yet now, in an era of social justice propaganda, heterosexuality’s becoming marginalized, along with marriage of the same. Sadly, that’s been a common tactic for many years, by ideologues who want problems to persist and not be solved.

It’s great if the iPad and other similar computerized devices have made it big among comic enthusiasts, for both reading and art design. But it’s a shame there’s still many news outlets who, when they’re reporting this news, dampen the impact by mixing identity politics into the brew.