How Spider-Man Dealt With the Subject of School Shootings

A few months ago, the Texas city of Uvalde suffered the tragedy of a maniac infiltrating and committing murder at a local school. It’s one of many sad cases of school shootings that have taken place in the past 3 decades or so. But most showbiz writers who take up these issues don’t seem interested in confronting the subject seriously. One example from the past 20 years, coming just a short time after the massacre at a school in Columbine, Colorado, was the 31st issue of Amazing Spider-Man from 2001, written by the overrated J. Michael Straczynski; the 2nd issue he’d written after taking up the writing during 2001-07. This story, where Peter Parker took up a job as a science teacher in a NYC school, had a storyline involving a student armed with an assault rifle (it wasn’t clear how he even got the weapon to begin with, for anybody who thinks realism is an important component in such stories) breaking into the school and blasting away, before Spidey was able to stop him. And what do we find out?

A sample panel from the issue below: 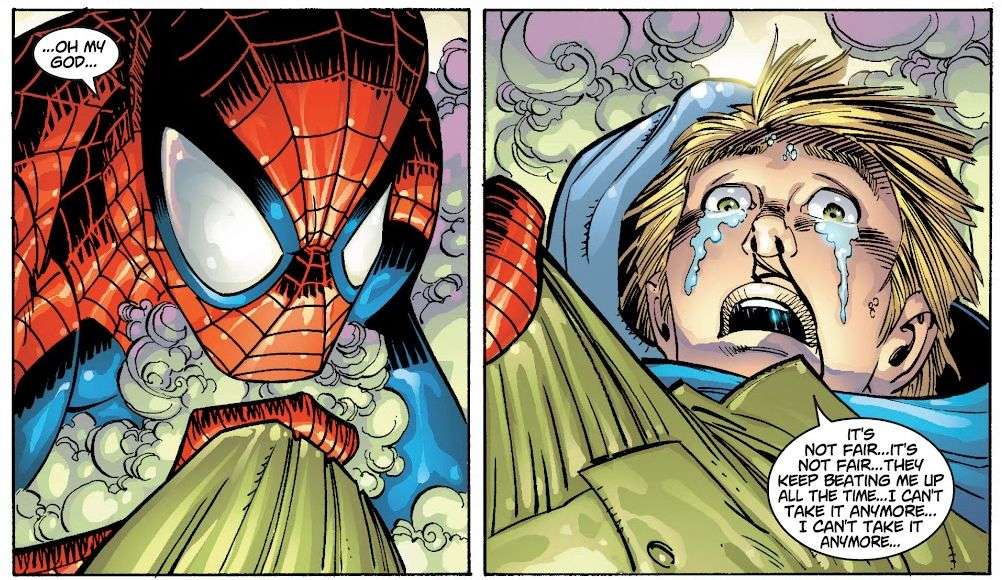 So it turns out the shooter is a kid who’s suffered bullying, and his idea of revenge is to endanger the entire school. Not somebody who could’ve been influenced by violent movies and video games. Yet this does suggest quite a few Hollywooders go by a “code of honor” and won’t complain or question whether violent media poses any bad influence on younger viewers.

And then, in this next panel: 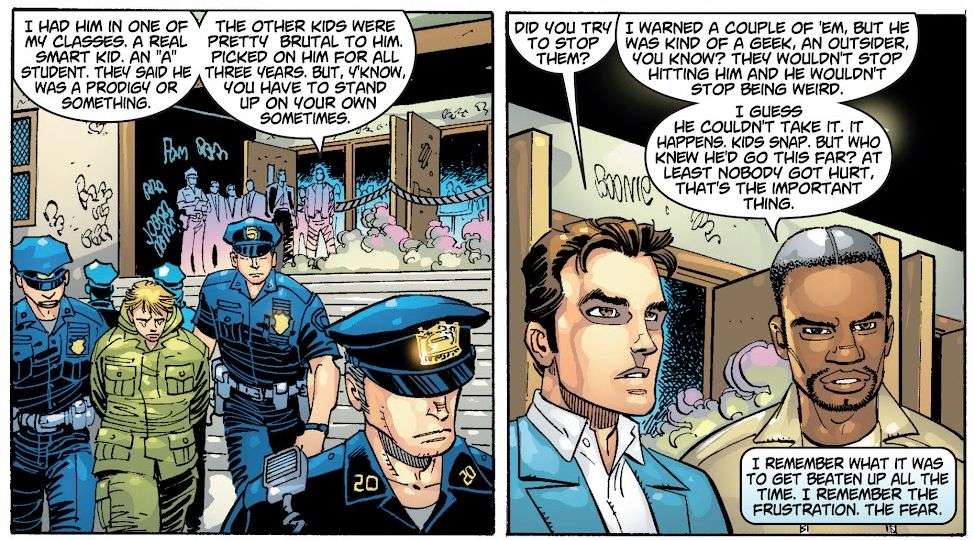 Here, it sounds like Straczynski absurdly risked implying the kid was to blame too for being a “geek”. Which is just as insulting to the intellect, as it suggests victims of bullies are to blame for failing to shed overt geekiness. All that aside, this was a very defeatist storyline, and the worst part is that there are leftists who actually believe the narrative employed here – all school shooters are merely victims of bullies taking out revenge against entire school bodies regardless of whether anybody was involved or not. And none of the shooters could possibly have ever been influenced negatively by the oh-so precious violence of Hollywood’s entertainment machine. I recall a leftist or two on message boards over 2 decade ago who were like that, and they even turned out to be wolves in sheep’s clothing themselves, who harbored lenient views of Islamic terrorism. Worst, they had accepting views of victim-blaming. In retrospect, apologists for both showbiz-based violence and real life Islamic terrorism do seem to go hand in glove.

HBO entertainment host Bill Maher pointed out a few months ago that Hollywood’s got a problem of romanticizing gun violence and mass shootings, even as they’re willing to shed a lot of other ideas that could be preferable to jarring mayhem:

Mahar said, “When liberals scream, do something after a mass shooting. Why aren’t we also dealing with the fact that the average American kid sees 200,000 acts of violence on screens before the age of 18? And that according to the FBI, one of the warning signs of a potential school shooter is a fascination with violence-filled entertainment. It’s funny, Hollywood is the wokest place on earth, and in every other area of social responsibility, they have intimacy coordinators to assist with sex scenes, they hire sensitivity readers to edit scripts, Disney stood up to the ‘Don’t Say Gay’ law. Another studio spent $10 million to digitally edit Kevin Spacey from a movie. But when it comes to the unbridled romanticization of gun violence, crickets. Weird. the only thing we don’t call a trigger is the one that actually has a trigger.”

This argument applies just as strongly to comics as it does to movies, if you take into account any stories involving jarring violence within the 4-color panels. In the past 3 decades, there were quite a few notorious examples of violent content, both physical and sexual, with Green Lantern volume 3’s refridgerator scene in 1994, the rape of Sue Dibny in Identity Crisis a decade later (and the miniseries even concluded with the repulsive hints that Jean Loring suffered a similar fate), and Tigra was assaulted by The Hood in the Avengers in the late 2000s for cheap sensationalism, yet nobody complains how that’s going more than a bit far either. More recently in movie adaptations, the pretentious Dwayne Johnson boasted all about the jarring violence that’ll turn up in his new Black Adam movie, while simultaneously advocating for gun control. That says all you need to know about the disturbing hypocrisy prevalent in Hollywood.

The Ankler recently reported that some Hollywood celebrities did make a call for toning down gun violence. But much more consideration is required, including whether movies like Black Adam are a healthy influence if they’re filled with alarming physical violence, and if it’s as horrific as Johnson implied in his interviews, then a PG-13 rating isn’t enough. And comics publishers approving of sensationalized violence are going to have to rethink this acceptance as well. And they can’t keep boomeranging back on the kind of excuses the Spidey issue from 2001 builds upon. That’s one of the reasons why serious issues have almost never been explored convincingly in the modern era.