How Political Comics with “Important Messages” Have Become a Joke

The South African Highway Mail’s written a puff piece about the important messages comics can allegedly convey. It begins:

For Reza Adam and Naseemah Desai, owners of comic bookstore Project Mayhem, the positive role that comic books play in society is a subject they are passionate about.

Sure, the medium can be a great place to spotlight topics like mental health. But then, they ruin everything with the following:

Current themes are relevant to navigating modern life with the complex challenges we face as a society.

Desai says that one of the comics she highly values is written by a person with autism and describes her daily experiences living with autism. The story helps the reader to understand the challenges an autistic person faces. Ms Marvel is another favourite comic book character for the pair. The narrative follows a teenage Muslim heroine whose parents have emigrated to the United States. The narrative helps to break down stereotypes around the Muslim community.

Desai says these stories deal with identity and show that you don’t need to lose who you are to experience life to the fullest. Comic books emphasize that a person’s differences can become strengths.

Ahem. These stories deal with identity politics, and that can become a weakness, when ideology is all that matters. That the writers went out of their way to cite the Muslim Ms. Marvel book, which Marvel went miles out of their way to push at all costs, no matter how badly it misleads and misinforms about the Religion of Peace, proves they’re not serious about making distinctions. One must also wonder why victims of September 11, 2001 and their families are never mentioned in news reports like these either. And then, what’s this the paper brings up:

Adam points out, “Superman is an alien – in the comic books, he’s constantly fighting people who think he’s too powerful. The message he hears is ‘go back to where you came from’ or ‘there’s no room for you here’. However, Superman’s weakness is not Kryptonite but rather that he cares about people. Every book has responsibility as a prominent theme and explores the dilemma that comes from the hero enjoying the power at first and then having to shoulder the responsibility that comes with it later.”

This is also quite insulting to the intellect, if only because it’s confusingly conveyed, not specifying it’s real-life PC advocates detached from reality, uninterested in story merit, who’ve written off the Man of Steel as nothing more than a creation who’s “too powerful”, and don’t consider the stories where he has faced brutal combat with formidable machinery, and magic. And then they say his weakness is that he cares about people, without making clear his characterization was usually that he cares about innocents?!? I think this is very telling. 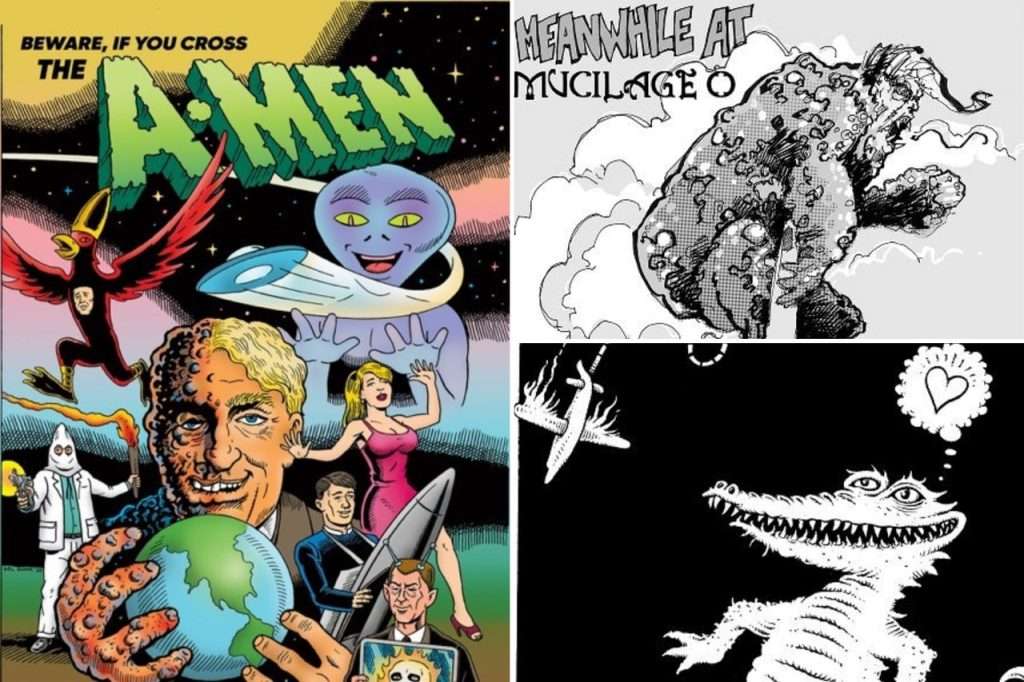 And since we’re on the topic of political messaging in the 4-color panels, the Cleveland Plain Dealer turned out another sugarcoated item about a political “critique” called A-Men, where the signs of ultra-leftist trash are in sight:

The comic, featuring work by a dozen comic book creators, including Tim Switalski, Bruce Worden and Shlepzig, was designed in the fashion of Mad Magazine, Kraynak said. Styles change page-by-page, offering a zine feel to the project.

“Everyone basically had the freedom to create whatever they wanted as long as the story was followed,” Kraynak said. “It certainly wouldn’t be what it is if so many great artists weren’t willing to contribute and be a part of this.”

That story within “A-Men” is outlandish, bringing villainous characters like “Conald Dumpster,” “Reverend Hardon” and “Kernel Kalvin Korn” together on a plane. That plane crashes into a toxic swamp, giving each character superpowers that they plan to use for nefarious purposes.

With a character name like that, you can guess where this is going. As the following makes clear, however, it’s even more disturbing than you’d think:

“Some passengers have been selected specifically to embark on a wild adventure by forces beyond human understanding… a plot to mercilessly pillage, rape and ultimately destroy the world! And Conald has been handpicked as the leader!!”

[…] “Conald Dumpster” – the ringleader of the A-Team – was based on former U.S. president Donald Trump.

“Any opportunity to mock the dumpster fire that was the Trump administration is hard for me to pass up,” Dumm said.

There have been some pretty bad leftist metaphors for Trump over the years, but this is really going far. It even sounds like they’re desecrating the 1983-87 TV show starring George Peppard and Mr. T, possibly because co-creator Stephen J. Cannell was a conservative himself. And then, one of the writers of the political comic has the gall to make this all out to be a free speech issue, but only based on its being a left-wing project:

Kraynak said that he and Dumm found inspiration from other political comics and graphic novels, including Art Spiegelman’s “Maus,” Joe Sacco’s “Palestine” and Marjane Satrapi’s “Persepolis.”

The comic book creator said that it’s important to continue exercising free speech through projects like “A-Men,” and that he hopes the comic book can, in its own way, inspire social and political change.

“The characters represented deserve only the harshest and most powerful criticism,” Kraynak said. “I think with the current threats to our freedoms and personal liberties, especially toward women, the LGBTQ community and people of color, everyone needs to use every medium available to fight for equality for all.”

I don’t know about Satrapi, but Sacco and Spiegelman, that I understand, based on their own far-left politics, especially the former. This certainly is telling of where these propagandists in Ohio are coming from, as they even cite a GN emphasizing an Israel-invalidating name originally coined in the Roman era.

There’s also this short article in the Laredo Morning Times about another creation with possibly political motivations:

Rodriguez discussed the evolution of his comic book “El Peso Hero,” and described how the main character stands up for the rights of those who have been disenfranchised or treated unjustly on both sides of the U.S./Mexico border.

This is a lot more ambiguous, and leaves one wondering whether it’s even remotely critical of leftists for their policies that have led to the current border disaster. Does the comic’s hero stand up for victims of violent crime on either side of the border, which could’ve also been committed by illegal immigrants? If it doesn’t clearly focus on those kind of issues, which are very serious, what accomplishment’s been made with the medium?

And in the end, as the 1st and 2nd examples make clear, when comics are employed for the purpose of conveying such one-sided messaging, that’s why it’s hard to believe they consider it a matter of importance.