The Baltimore Business Journal’s written about how comic specialty stores in their area are coping with the Covid19 pandemic crisis, and what they think of DC’s severing ties with Diamond distribution. Here’s what they tell about the parting of ways with Diamond:

Retailers have had mixed reactions to the news. Some say the decision slowly chips away at the monopoly Diamond has held on the comic book industry since the mid-1990s. Others, including many Baltimore-area retailers, believe it’s the latest bad decision made by DC Comics’ parent company, Time Warner, since it was purchased by telecommunications giant AT&T in 2018.

I can’t say I’ve given this much thought, but TW and/or AT&T are the ones responsible for the change? Good question. But this at least tells more than a few previous reports I’d found, which were heavily biased in Diamond’s favor, and against DC’s choice to part ways with the distributor for at least two more. Obviously, there are some retailers who do applaud the move, but the specialty news sites won’t give them room to opine.

Benn Ray, owner of Atomic Books and president of the Hampden Village Merchants Association, is one retailer who is not enthusiastic about the new arrangement and its impact on independent stores. After breaking with Diamond, DC switched its periodical distribution to Lunar Distribution and UCS Distribution, which are both owned by major comic book retailers — Discount Comic Book Services and Midtown Comics, respectively.

“I would prefer to have the option of ordering books through a distributor that isn’t owned by large corporate retailers,” Ray said. “And right now, DC Comics is forcing me to support my competition.” 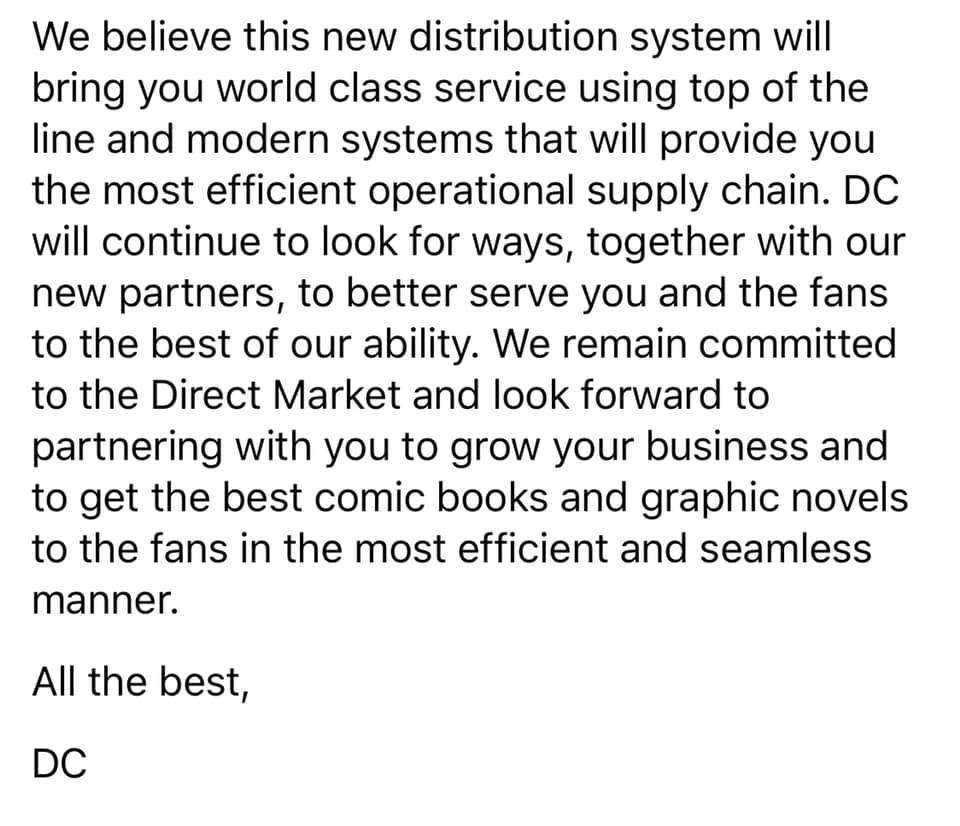 Fortunately for Atomic Books, works from large publishers are only a small part of its inventory — the bookstore focuses primarily on small press or independently published work.

But Ray, who previously worked for Diamond, believes the company has been a monopoly for big-name publishers, such as DC and Marvel, and that other distributors deserve a fair shot. He notes, however, that having a central distributor helps maintain consistency in shops, a must-have for customers.

Still, under the new scheme, “I’m far more unhappy than I am having to order comics through Diamond,” he said.

Again, I’m at a loss to understand why nobody seems to be asking whether Lunar and UCS will offer discounts and beneficial prices for shipping? If they don’t, then this should be made clear. If they do, then what’s the worry? At least this seller recognizes Diamond’s got a serious downside, enabling the Big Two to monopolize the industry at smaller companies’ expenses.

If these retailers want to make a positive difference, they have to be clear what their requests are. Then, the distributors could listen up in their favor. What’s so hard about that?

*Apparently they aren’t listening either… 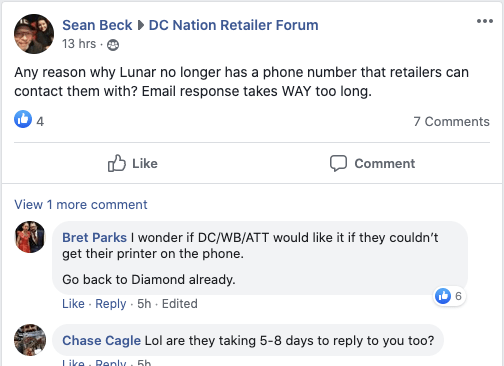