CBR’s run a list of 10 DC characters or series that may have once been popular, but which disappeared of recent. For example, there’s the Justice League from its late 80s/early 90s incarnation:

When Keith Giffen, J.M. DeMatteis, and Kevin Maguire launched Justice League International back in the day, it was a massive hit. It’s been forgotten these days, what with the first half of the 2000s being spent writing the franchise off as a joke.

Back then, though, it spawned several spin-off comics and turned the Justice League into its own world. However, after the initial wave of popularity from 87 to 92, the JLI have had a bit of trouble trying to stay in the spotlight. They were brought back with Justice League: Generation Lost in 2010-2011 to great acclaim, but the New 52 reset everything and left them with a new monthly series which didn’t have the roster or the interest of Generation Lost.

Well, the sad thing about one of those spinoffs, JL Europe, is that Gerard Jones, as a leading writer for it, has since left it tainted after he was arrested and imprisoned over his child porn scandal. DC even had to cancel a planned reprint of the Breakdowns story that weaved between JL Europe and the JL America title around 1991. As far as I know, only the first 13 issues of the Euro-based spinoff are not written by him, and 11 were reprinted. But after those 13 initial issues, he became a co-writer and then full-time writer, and much of that run – comprising at least 4/5 of its run, is unlikely to be reprinted for a long time, and even the 2nd volume of JL International, which replaced JL Europe for a year in 1993 and he continued writing, is bound to gather dust with the rest. The worst part of this whole Jones scandal is that now, a lot of stories where Power Girl was a co-star have been tarnished, along with those featuring Elongated Man and Sue Dibny. As though what happened in Identity Crisis weren’t bad enough. 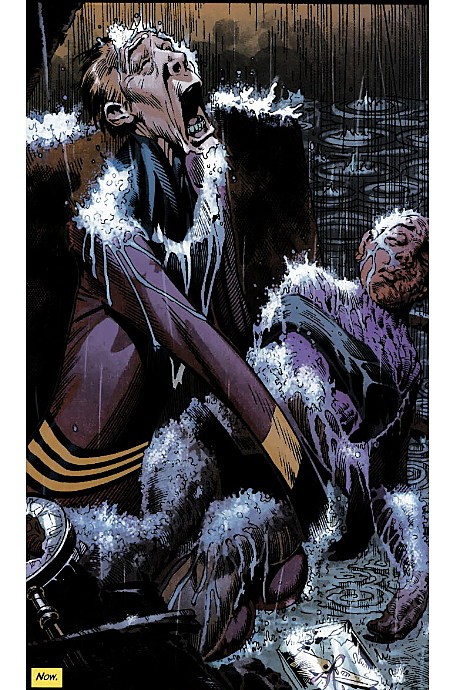 As for being written off as a “joke”, what they don’t mention is how Countdown to Infinite Crisis was the place where the run was slapped in the face, all for the sake of the dark, nasty viewpoint Identity Crisis served to usher in. No surprise they didn’t say anything, though. These aren’t real historians, let alone opinion-formers, so of course you couldn’t ever expect them to figure out anything on their own.

They bring up a villain called Mongul, who appeared in the Death and Return of Superman, and with it, the mention of a very degrading “development” that harmed the DCU:

In the early 90s, he worked with Cyborg Superman and attempted to turn the Earth into another Warworld, resulting in the destruction of Coast City. Then, during the 2000s, he becomes the leader of the Sinestro Corps. Aside from a less-than-impressive appearance during Superman: Doomed, though, Mongul has dropped off the map in favor of better known Superman villains like Lex Luthor, Brainiac, and Zod.

Destroying 2nd Green Lantern Hal Jordan’s hometown is what’s actually offensive about the 1992-93 multi-parter in Superman’s books. The Man of Steel, his cast and hometown, are invaluable and indispensible parts of the DCU, but Hal Jordan’s are apparently sacrificial lambs worth jettisoning. Apparently, that’s what the people in charge must’ve thought back in the day, and it didn’t help one bit. I hope the irony wasn’t lost on Superman fans who read that whole overrated mishmash in the early 90s. It may be one thing to temporarily kill off the Man of Steel, but it’s entirely another to take a different superhero and turn him into a mass murderer for the sake of additional publicity. It’s clear the annihilation of Coast City was planned and connected well in advance to the latter half of Superman’s death and return, and that alone makes it a very bitter affair, taking away any decent impact they supposedly wanted to leave there as a result. Seeing how the aforementioned Jones basically went along with it in the penultimate issue of his 1990-93 GL run, that’s why I see his claim he balked at going along with the plans to degrade and later kill Hal Jordan as doubtful. Otherwise, he would’ve bailed out much earlier. 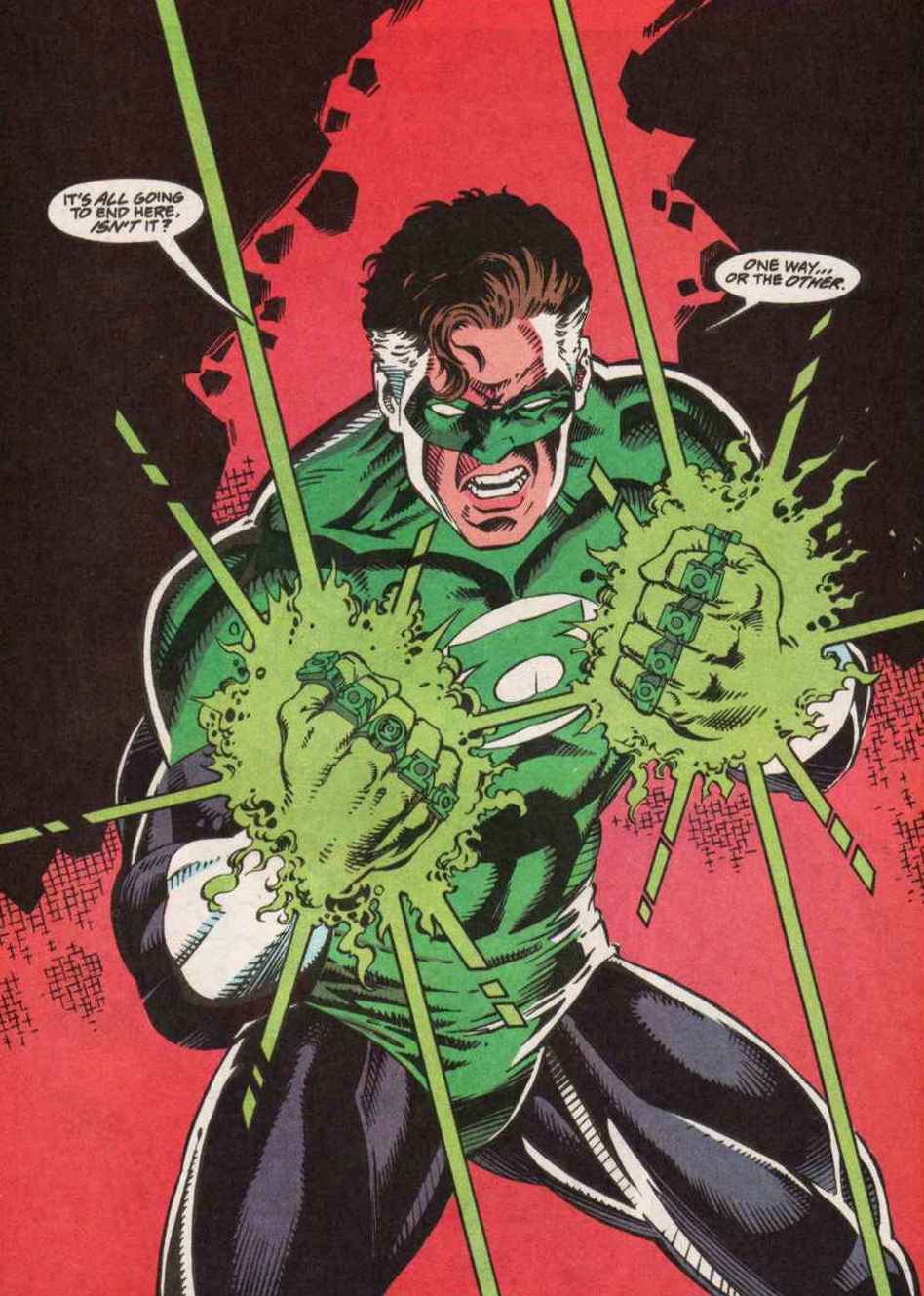 Teth-Adam was a big deal in the 2000s, thanks to Geoff Johns’ portrayal of the character in JSA. More of an anti-hero version of Dr. Doom, Teth had to learn to balance protecting his home country of Kahndaq with his impulsive nature and incredible power.

The character was everywhere during the 2000s, even being the source of a mini-event during 52 entitled WW3. But after the New 52 reset so much of his personal story, there simply hasn’t been much need to see him. He’s been in Doomsday Clock, but even there, his importance has been reduced and he’s made zero appearances outside of that comic.

In hindsight, Johns’ run on JSA was one of the most pretentious, overrated scrap piles I’ve ever read. I’m glad I don’t own any of his junk today. If Black Adam’s fallen by the wayside, it’s for the best, considering what harm he led to. Another example is the New [Chinese] Superman:

One of the new characters introduced to fans during the Rebirth era of DC Comics, Gene Luen Yang’s work on Kenan Kong quickly made him one of the more likable newer aspects of the DC Universe. His world felt fresh, yet still connected to the DC Universe, with fans getting to meet the Justice League of China and seeing unique new additions to a world that’s decades old.

After Kenan’s comic book ended, however, we’ve seen very little of any of these characters. It’s strange that all of these unique and promising personalities haven’t found a home somewhere.

This was surely one of their laughable attempts at “diversity”, and if this suggests anything, it led nowhere, and was no more successful than Marvel’s attempts at the same. Besides, how can they be unique and promising if their whole reason for being is just social justice pandering? Then, what’s this about Firestorm:

For a time, DC pushed Firestorm as Ronnie and Professor Stein, but got rid of them during Identity Crisis to introduce Jason Rusch, a young high school student who inherited the Firestorm matrix after their death. Though his comic lasted a while, by the time of Blackest Night, DC thought to reintroduce Ronnie Raymond as a Black Lantern, before eventually bringing him back via the White Lantern.

The result was both Jason and Ronnie forming Firestorm for a time, before the 2011 reboot lead to the character getting a polarizing ongoing story that didn’t last very long before coming to an end. Since then, the Ronnie Raymond version of the character has made a couple of guest appearances in Doomsday Clock (but nowhere else), while Jason Rusch has been nowhere to be found.

Now this, as I’ve mentioned at times before, was an early example of race-swapping (Rusch was black), nearly a decade before Marvel went full SJW themselves. Needless to say, the way things were handled in 2004 was much worse than how Marvel did some of their own shifts to characters of skin color and sexual orientation. It’s one thing to replace a white character with a black/Asian/mixed-race star, but if you’re going to kill off the original costume-wearers in such a nasty manner as Identity Crisis did, that’s exactly why the new hero’s being isn’t built on valid grounds. Besides, the costume isn’t what the audience is supposed to care about. It’s the characters.

And if memory serves, Prof. Stein was dropped from Firestorm much earlier, and wasn’t around when the IC atrocity took place. This does hint at a possible difference DC has from Marvel: unlike the erstwhile House of Ideas, DC may be more willing to let some failed ideas fade into the past, whereas Marvel, as seen lately with the Ms. Marvel, hangs onto them almost hilariously, no matter how poorly they fare in sales and reception.

Later on in the article, the Atom comes into focus:

Between both Ray Palmer and Ryan Choi, the Atom was a big deal in the 2000s. Ray Palmer had a major role during the 2004 story Identity Crisis, then Ryan Choi had his own following Ray’s disappearance. We even got an entire series devoted to finding Ray again in 2007 in Countdown: The Search for Ray Palmer, while Ryan Choi’s death created a bit of controversy when he was killed during the aftermath of Brightest Day in a Titans comic.

Since then, neither of them have been seen very much. Ray and Ryan were the subject of an arc in the Justice League of America story “Panic in the Microverse.” Since then, they’ve both shrunken out of sight once again.

Well this is definitely another problem spawned by Identity Crisis, and curious they don’t even mention how, not only was Ray’s ex-wife Jean Loring turned illogically into a murderess of Sue Dibny, supposedly based on one or two tales from the Silver/Bronze Age but in name only, Ray was made to look like a bad guy himself because he supposedly told Jean all the secrets of the superheroes. They may have finally dropped IC from canon after nearly a dozen years, but as evidenced by their recent conduct, they still seem determined to get rid of Ray in favor of a social justice-based creation, though even the Choi character’s vanished since.

In the end, it’s clear that when you have someone as loathsome as Dan DiDio running the show, nothing classic is bound to be respected, and they don’t seem to know what to do with any of the series they’ve produced either.