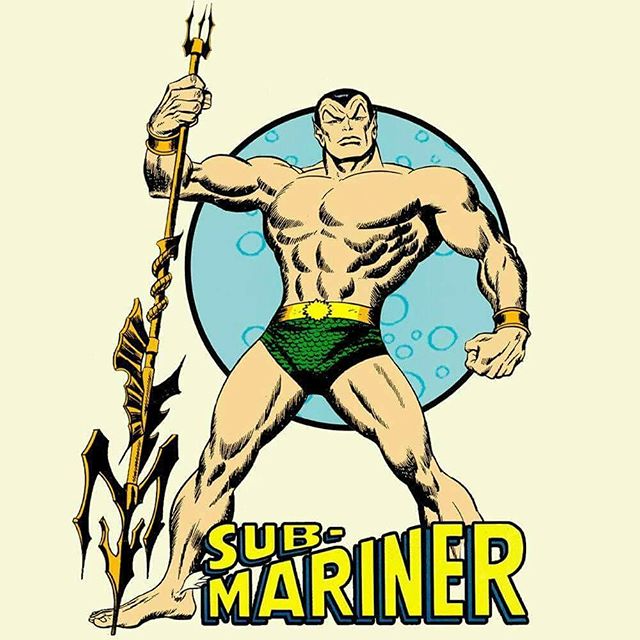 Prior to the new Wakanda Forever movie’s premiere, The Ringer gave some history about prince Namor’s history as one of the first characters to comprise the Marvel universe in years to come, along with the original android Human Torch. And what they tell here in regards to subsequent allusions to WW2 sounds like PC in motion:

As the son of an Atlantean princess and a human explorer, Namor was born an Atlantean prince but was still a product of two worlds, above and below the surface of the ocean. He is considered to be Marvel’s first mutant, with winged ankles that enable him to fly, in addition to superhuman strength and endurance and the abilities to breathe underwater and swim at superhuman speed. During his sprawling, 80-plus-year history in the comics, Namor has fought alongside superhero teams like the Avengers and the X-Men, and was a founding member of the Defenders and the secret organization of heroes recently introduced in Doctor Strange in the Multiverse of Madness, the Illuminati. (That long history even includes his service in World War II propaganda comics, as he fought against Nazis during the 1940s, not to mention issues with titles like “The Sub-Mariner Raps the Japs in the Pacific,” which featured some rather unflattering depictions of Japanese soldiers, to put it lightly. Point being, Namor is old as hell and not all of his history is worth remembering.)

Oh, just look at that, somebody sought the umpteenth excuse to obscure Japan’s own war crimes like the Rape Of Nanking, and the Pearl Harbor attack. What do you honestly expect when a country that at the time was consumed by fascist corruption goes and attacks innocent people? And why must those old comics where Namor fought in WW2 be considered propaganda? The way they put it reeks of negativity, and why shouldn’t his early stories be remembered? People can’t judge for themselves? Truly insulting. Japan has long since improved its morale, but that doesn’t mean we should just obscure history and what was done wrong in the past century.

But while Namor often has allied with Earth’s mightiest heroes, he’s also spent plenty of time fighting against them—a crucial point as the character makes his way to the MCU. In addition to being one of Marvel’s first superheroes (along with the original, android Human Torch), Namor also holds the honor of being its first antihero. He’s a frequent rival of the Fantastic Four in particular, but even from his first appearance, the Sub-Mariner shows something of an ambivalence to human life, especially when it comes to humanity’s treatment of the ocean. Namor’s true allegiance has always been to Atlantis. (On that note, one of the most captivating—and terrifying—depictions of Namor is in a 2008 miniseries written by Peter Milligan and wonderfully illustrated by Esad Ribic, Sub-Mariner: The Depths, which follows a scientist’s deep-sea mission to prove the existence of Atlantis in the 1950s. Without giving it all away, the moral of the story is: Don’t mess with Namor.)

And don’t exploit Namor’s history for woke propaganda points either. That aside, when I see these news sources citing something coming well after 2003 as a story we’re expected to believe is a masterpiece, something is very wrong with the picture.

Namor’s status as an antihero makes him the perfect candidate to play the “villain” role in Wakanda Forever, following in the footsteps of Black Panther’s Killmonger. Like Killmonger, Namor is positioned to be much more than the one-dimensional bad guy we see in far too many MCU movies and superhero flicks at large, as he can be an antagonist whom audiences can empathize with. “Introducing Namor for us was really an opportunity to introduce another politician, another sovereign ruler of a group of people who represents more than himself,” director Ryan Coogler explained to Marvel.com. 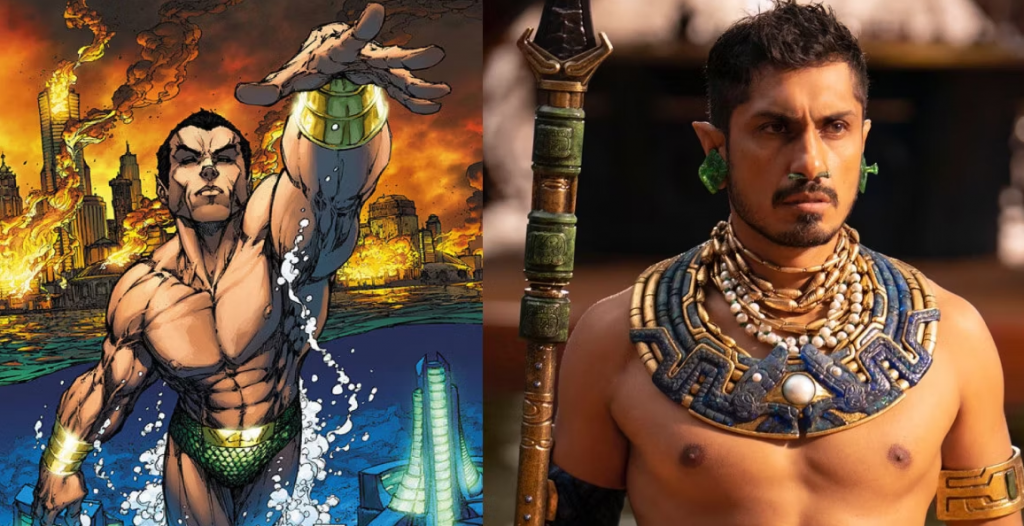 Gee, how odd they should put it that way, considering Killmonger was more of a full-fledged villain in the original Bronze Age Black Panther stories, while Namor by contrast was an anti-hero who did run the gauntlet of questionable conduct, but ultimately did make amends for past mistakes. I’m not impressed with this either.

Given how extensive Namor’s comics history is, his origins have been rewritten and repurposed by various writers time and time again. It’s only fitting, then, that the MCU versions of Namor and Atlantis will again be reimagined in Wakanda Forever as the character and his kingdom make the transition to the big screen. Atlantis, in fact, is no longer Atlantis. “There have been a lot of representations and creative depictions of Atlantis based off of Plato’s Atlantis, the Greco-Roman concept of a city sunk into the sea,” Coogler told Inverse. “That idea exists in a lot of different ways. We wanted our film to exist alongside those movies and be different.”

Instead of Atlantis, Namor’s underwater kingdom will be Talokan, replacing Atlantis’s Greco-Roman roots with those of ancient Mayan civilizations. “In the Black Panther film we released in 2018, we did the work of making sure the choices we made were culturally specific,” Coogler continued. “We did deep, deep dives and employed academics and consultants to make sure we were getting it right, and representing them with intention and respect. We want to do the same thing when bringing another culture to life. We settled on classic and post-classic Mayan civilizations around the Yucatan region as a base for our story.”

But why is it such a big deal to replace the original Greek/Roman mythology inspirations of Sub-Mariner with MesoAmerican ones? Why not create a new story drawing from Maya and Inca mythologies instead? They really are so cheap. Certainly, there’s a lot of potential in MesoAmerican mythologies of the ancient Indian empires, but these frauds have no clue how to realize it organically. All they’re doing is disregarding the hard work of Stan Lee – and Bill Everett – in the years after they’ve been long gone. I just don’t see the point of this film, other than to virtue-signal. One more reason I won’t be attending. I highly prefer arthouse movies at this point. 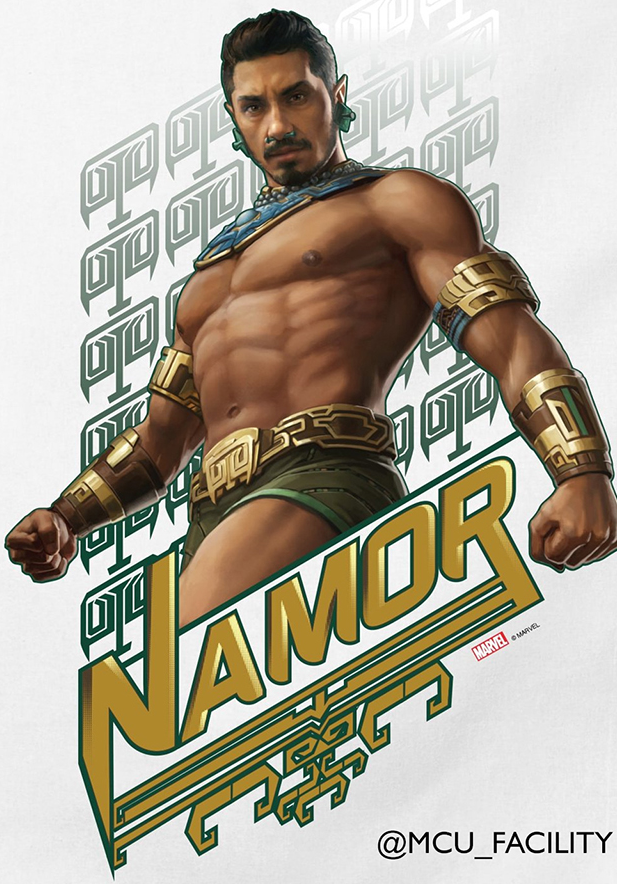 And lest we forget, Wakanda Forever, since it’s part of the subject now, is being barred from China due to employment of LGBT themes, as reported by Business Insider:

The reasons vary for Marvel’s absence from China, but it largely has to do with political and cultural sensitivities. “Thor: Love and Thunder,” for instance, wasn’t approved by China’s film censors because of LGBTQ+ themes, according to The Hollywood Reporter.

Similarly, “Wakanda Forever” didn’t get past the film regulators because of a brief depiction of a same-sex relationship between two female characters, THR reported.

So again, we have a case of Marvel movies turning more noticeably woke, one after another, and it leads to China shutting them out, along with Islamic countries where this is considered taboo, yet no SJWs will complain. Only the USA and other such countries matter, at the expense of family values and such.