If there is one thing that progressive love more than self validation, it is the corruption of conservative values.

Progressives in Hollywood love to recreate the fantasy of a conservative child leaving the traditions of their family (aka Christianity) and joining their progressive post-modernist utopia, especially if they turn gay.

HBO Max, who last year released the pro-abortion film ‘Unpregnant‘ is dropping their latest “F*** you” to center-right audiences called ‘Genera+ion’. A new show which is being hailed by progressive critics for exploring the sexual degeneracy of teenagers. Yes. 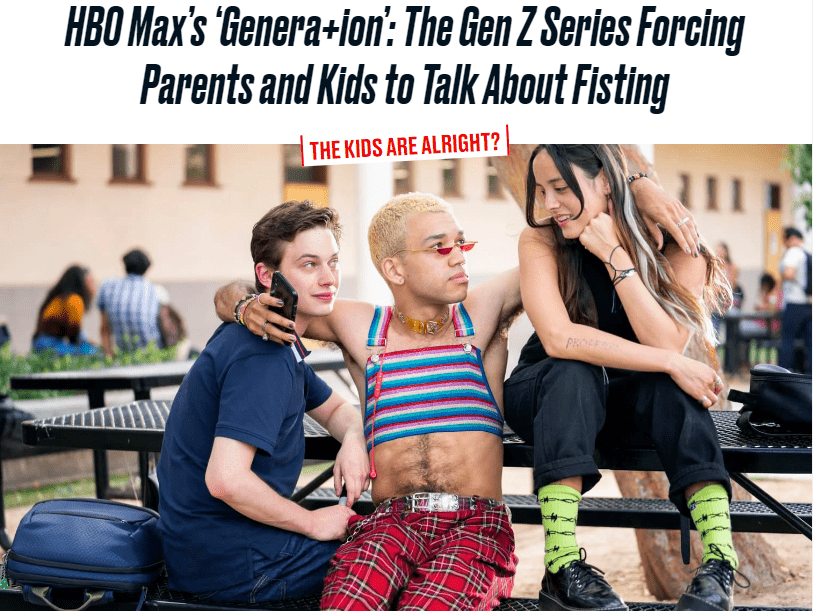 A quick description of the first episode highlights runs down how a twin brother and sister are both eager and anxious to sexually experiment with the same guy. It also notes how spunk shoots into someone’s eye, kids sent dick pics and drugs are stolen from parents and used. Sounds like utopia? This is the future of your children.

The show was created by Zelda Barnz, a 19 year old lesbian who co-wrote the show with her gay father, Daniel Barnz. Zelda, the daughter of two gay Hollywood screenwriters and producers, wrote the show at the age of 17 and based it on her own coming out story. The show hopes to be a Gen Z teen story told from a Gen Z perspective with the idea of exposing parents to what has been normalized to their kids beyond their knowledge.

Progressives applaud the idea of turning teenagers into confused and unhappy products of their ideology who look to sex and drugs as a means to figure out who they are and there present this way of life as “normal” to your kids.

Lena Dunham is the executive producer of this show that premieres on HBO Max today. Parents should in fact be in touch with what there children are doing and that they are learning from outside forces.

Gunn & Safran Confirm 'Harley Quinn' to Continue Under DC Studios
HBO Max Pulls Plug on 'Doom Patrol' and 'Titans'
All the Reasons HBO Max's 'Velma' Went So Terribly Wrong
Despite Everyone Hating 'Velma' 2nd Season is Reportedly in the Works
Prime Video Surpasses Netflix in the U.S. Streaming Market
HBO Max's 'The Penguin' Series to Tie In to 'The Batman' Sequel
Hugh Jackman: I Need 'Six Months' to Get Back in Shape for Deadpool 3