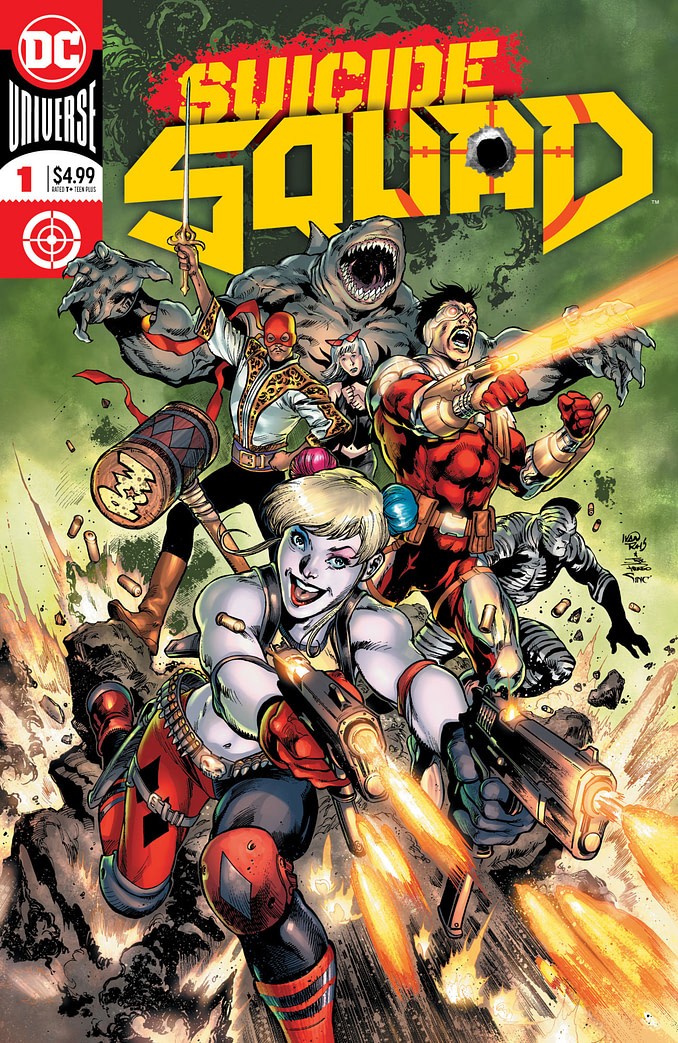 Australian Broadcasting Corp. spoke with the writer of yet another take on the concept originally begun in The Brave & the Bold in 1959, and later updated by John Ostrander in his 1987-92 series casting villains forced to serve the cause of good, overseen by government operative Amanda Waller, and it turns out this time, DC’s taking the Squad and using it as an excuse for more LGBT/racial diversity propaganda:

“She’s the one [character] who can walk into any situation and walk back out again alive,” says her co-creator, Melbourne-based comic book writer Tom Taylor.

Thylacine (Corinna in her civilian life) is the latest recruit for DC’s Suicide Squad, and has been created by Taylor and artist Bruno Redondo, in careful consultation with writer, actor and director Shari Sebbens (The Sapphires, ABC’s The Heights and Black Comedy) and Cleverman creator Ryan Griffen.

And Thylacine looks very unattractive in design. Just because this was once known as a starring vehicle for crooks forced to repent in a government project for the cause of good, does that make this acceptable? Nope. This also ignores that Robert Kanigher conceived the original team to use the name Suicide Squad in 1959, making the overall history much longer than just 33 years.

When Taylor was offered Suicide Squad, he saw a chance to introduce “exciting, diverse characters into the DC Universe”.

“I want to create a whole new set of anti-heroes for today and I want them to be completely diverse, from all over the world and from all walks of life,” he recalls telling his editor and publisher.

Except that most of them all look like they’re either just of different skin color, or they’re these LGBT-type figures. For example:

Thylacine made her debut alongside 10 new characters including non-binary and winged The Aerie and their love interest American teleporter and kleptomaniac Wink, Puerta Rican former super-soldier Osita and exploding Argentinian T.N.Teen.

While the members of Taylor and Redondo’s new-look Suicide Squad aren’t the first Indigenous, LGBTQI or diverse-identifying characters in the history of comics, the Melbourne writer hopes they will have more lasting power and active roles in comic stories than those who have come before them.

“So often [with diverse characters] they’re the ones that get shunted, but these are superheroes we’re talking about — they have a responsibility to be heroes for everybody,” Taylor says.

He seems to ignore that the most notable iteration of the Squad is as a starring vehicle for villains. They may be serving the cause of goodness, but they were still villains, and probably still aren’t reformed (and being aware of the inmates running the asylum at DC, it shouldn’t be surprising). He also fails to consider that there have been diverse characters with better development like Black Lightning, Cyborg and Lady Shiva who remained notable and were far from shunted as the years went by. 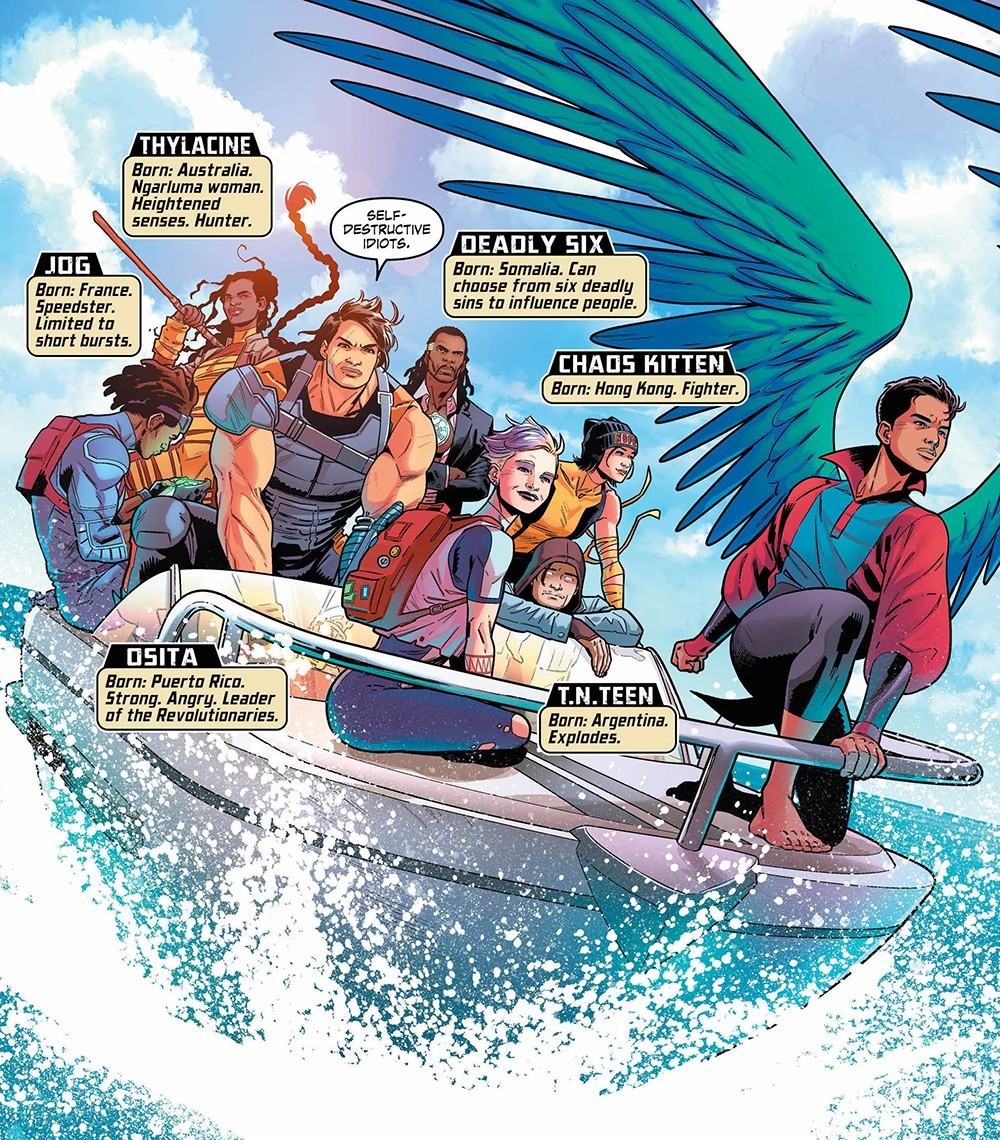 I also notice the Osita character is very masculine-looking, Thylacine is unattractive, and if that’s Taylor’s idea of diverse, he’s really taking it too far, much like a number of Marvel writers in the past decade.

One of the interviewees even had the mendacity to claim these stories aren’t aimed at them:

“There was an increased interest in Australia, and in Aboriginal characters, during the 80s — thanks to Croc Dundee and the 1988 bicentennial,” Pearson told ABC Arts.

“During the 80s we saw Marvel introduce Talisman and Gateway, both of whom open portals using a bullroarer, and Betty Clawman from DC, who like Talisman, had her powers directly linked to the Dreamtime, which for Talisman meant travelling to the ‘Dreamtime dimension’, and for Clawman meant she could enter people’s dreams,” he says.

“For both of those characters, it seems they [non-Indigenous Marvel and DC creators] just took the word ‘Dreamtime’ and added their own meaning to it.”

He points to “just how disappointing it is when something is about us, but not for us”.

With Thylacine, Pearson hopes the character and popular comic book series will generate wider interest in not only Indigenous characters but also in Indigenous creatives.

“The consultation process is a huge step forward … recognising that there is intimate knowledge and value that you can’t really bring from the outside,” he says.

Seriously, it’s impossible to gather knowledge from “outside”? This is so boring. And since when weren’t these stories aimed at people of any particular community, or, why does it sound an awful lot like somebody wants them to be aimed only at a particular group? In other words, it’s not for whites and shouldn’t appeal or be marketed to them, even if a white guy like Taylor is writing it.

Plus, do they honestly expect anybody of any community to just go for these creations if there’s no impressive writing built around them? Taylor and company are just virtue-signaling, and there’s a considerable contradiction here when it’s told the team has responsibilities to be heroes for everybody, yet the character’s allegedly can’t be marketed to everybody, or past creations supposedly weren’t, all because they may not have come with characteristics representative of their culture. That kind of paradox is just what’s discouraging a larger audience. 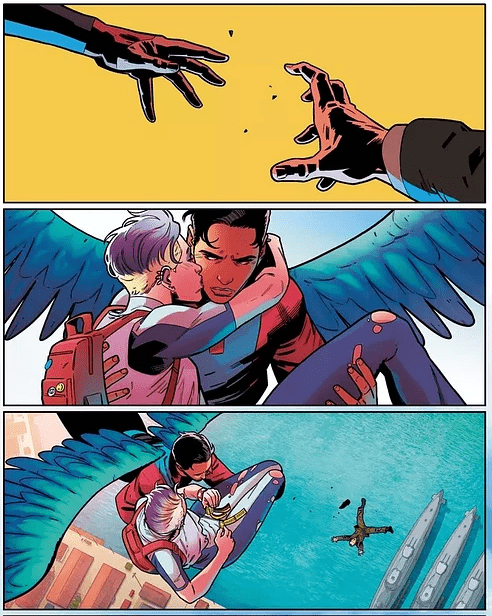 Update: I almost forgot to comment on the following about Capt. Boomerang, who turns up in this iteration, and is apparently meant to represent a negative view of whites:

In this month’s issue (five), Australia’s past and present collide as Thylacine and Suicide Squad face off with one of their own: Captain Boomerang — a hard-drinking, racist, sexist, sociopathic rural white-Australia stereotype who first appeared as a nemesis of The Flash in issue #117 in 1960.

“Captain Boomerang is a very old character with very old ideas of what Australia is, and often very cliched and just a bit of a trope,” says Taylor.

I think this is an awfully misleading description of George Harkness. He wasn’t portrayed as overtly racist or sexist when he debuted in 1960, nor was he a drunkard at the time, and come to think of it, he wasn’t portrayed with an accent until 2-3 decades later. One thing he certainly wasn’t depicted as in his early years was as a murderer of innocents, in sharp contrast to what he was depicted as in Identity Crisis. So why does it sound like Boomerang’s going to undergo a truly awful rendition in this story? He may have been a crook, but he was far from dishonorable, and what DC’s been doing to him of recent has been nothing short of reprehensible.