The internet may finally have found that much sought-after rarity: a company that has gone broke from getting woke.

Except this legendary beast isn’t a unicorn. 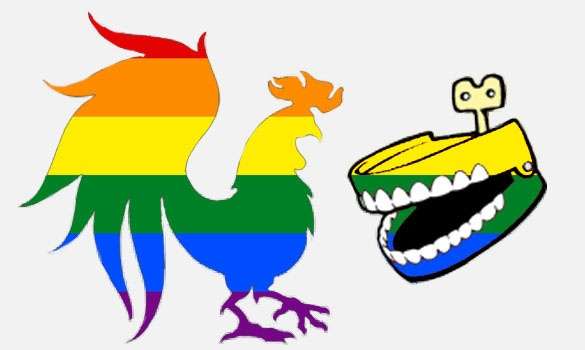 It is of no surprise to anyone that Rooster Teeth has had a very rough couple of months and that is putting it lightly. Everything from long time employees jumping ship month after month, allegations of a toxic workplace environment, bad hot takes from prominent voice actors and staff, drama between RT and both current and former employees, threatening legal action against RWBY fan creators, to destroying the hopes and dreams of an aspiring RWBY fan artist by pulling her entry from a contest for being deemed too culturally inappropriate. It has been a complete PR nightmare of their own making.

For those who came in late, Rooster Teeth Productions is a web series startup turned megacorp subsidiary that made their bones uploading HALO gameplay footage. Their college humor-grade voiceovers caused a minor sensation back when Homestar Runner was the bleeding edge of internet comedy.

To their credit, the bug men behind Rooster Teeth parlayed their early success into a major operation overseeing a number of popular cartoons. But as often happens, their Pop Cult pieties became a greased chute straight into wokeness.

Since Rooster Teeth has nothing left to lose, they have all but decided that the only option left for them is to go full on woke and start self-censoring all of their content moving forward. At the same time, they will be going back through their entire content portfolio and either add trigger warnings, disclaimers, edit out offensive slurs, or just out right delete videos entirely. All at their discretion.

(Bloomberg) — AT&T Inc. is seeking buyers for Rooster Teeth Productions LLC, a piece of its WarnerMedia division, as part of an ongoing winnowing of noncore assets by the phone giant, according to people familiar with the matter.

Now, the mere fact that AT&T is ridding itself of a kidney stone doesn’t mean the stone won’t find a buyer.

What it does mean is that Conservative power players have a once-in-a-blue-moon chance to put their money where their mouth is and strike a real blow in the culture war. 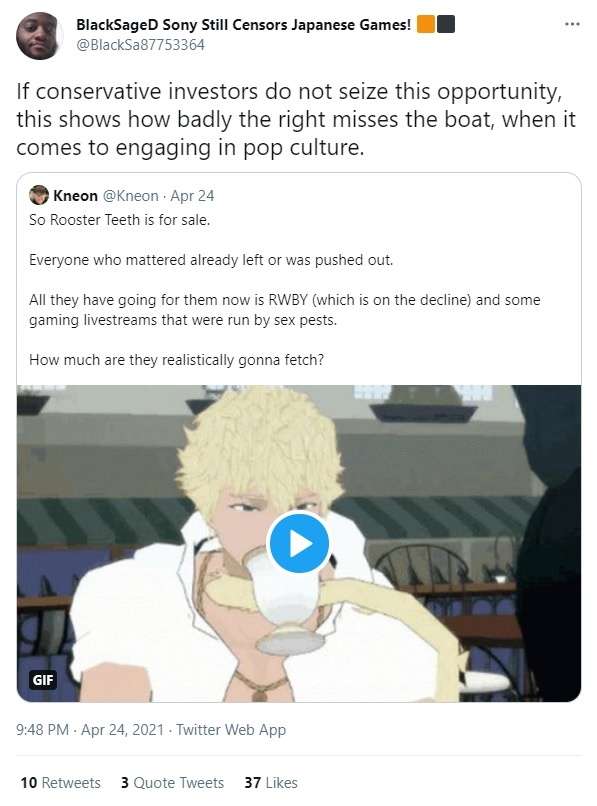 Sounds unrealistic? Consider that AT&T sold Crunchyroll for $1.2 billion last year. Crunchyroll’s yearly revenue is $27.5 million. Rooster Teeth only brings in about a third of that annually, and their revenues are falling fast.

Based on some back-of-the-envelope calculations, a pool of investors should be able to buy Rooster Teeth for about $20 million.

Heck, some upper middle-class MAGA boomers could probably form a company and buy Rooster Teeth with their combined resources. They’d just have to forgo their NRO cruise this year.

Or here’s an idea: How about all those right-wing influencers who’ve gotten cancelled since 2016 but still have big war chests buy Rooster Teeth? The Death Cult would go absolutely apoplectic if, say, Alex Jones, Jordan Peterson, or Milo Yiannopoulos turned the former home of Red vs Blue into a platform for deplatformed political heretics.

But wait. Here’s an even better idea. The Right has no shortage of maverick pundits raging against socialisms and waxing nostalgic about Trump. What they’re severely lacking is creators challenging the Left’s stranglehold on entertainment – more accurately they’re not; the Right is just horrible when it comes to fostering and promoting dissident art.

Conservative author Nick Cole co-created the monster hit Mil-SF series Galaxy’s Edge. Nick mentioned in a recent interview how he’d been shopping around a GE movie script. That project would print money, but Hollywood told Nick in no uncertain terms that they don’t make movies for, “white, Christian trash.”

If the Conservative movers and shakers who assure us they’re fighting the culture war were serious, they’d snatch up Rooster Teeth, buy the movie rights to Galaxy’s Edge, and produce the biggest animated film since Dragon Ball Super: Broly.

But a Galaxy’s Edge movie would have a real chance of drawing viewers away from the Pop Cult, and as they’ve demonstrated, Con Inc. mouthpieces can’t have that.

Dissident creatives may have to wait until the Conservative grift machine implodes under its own absurdity to get institutional support. Until then, preserve your dignity by not giving money to people who hate you.

Business Must Be BOOMing: BOOM! Studios Beefs Up Staff
Surprising New Film 'Missing' Lands in Weekend Box Office Top 5
'Star Trek: Generations' Not as Good as I Remembered
Why Star Trek VI: The Undiscovered Country is My Favorite Trek Film
'Star Trek V: The Final Frontier' Isn't Quite as Blasphemous as I Recall
Retro Review: Star Trek IV: The Voyage Home is Totally 80s’ed Out
Star Trek III: The Second-Part of the Best Space Adventure Ever Put to Film