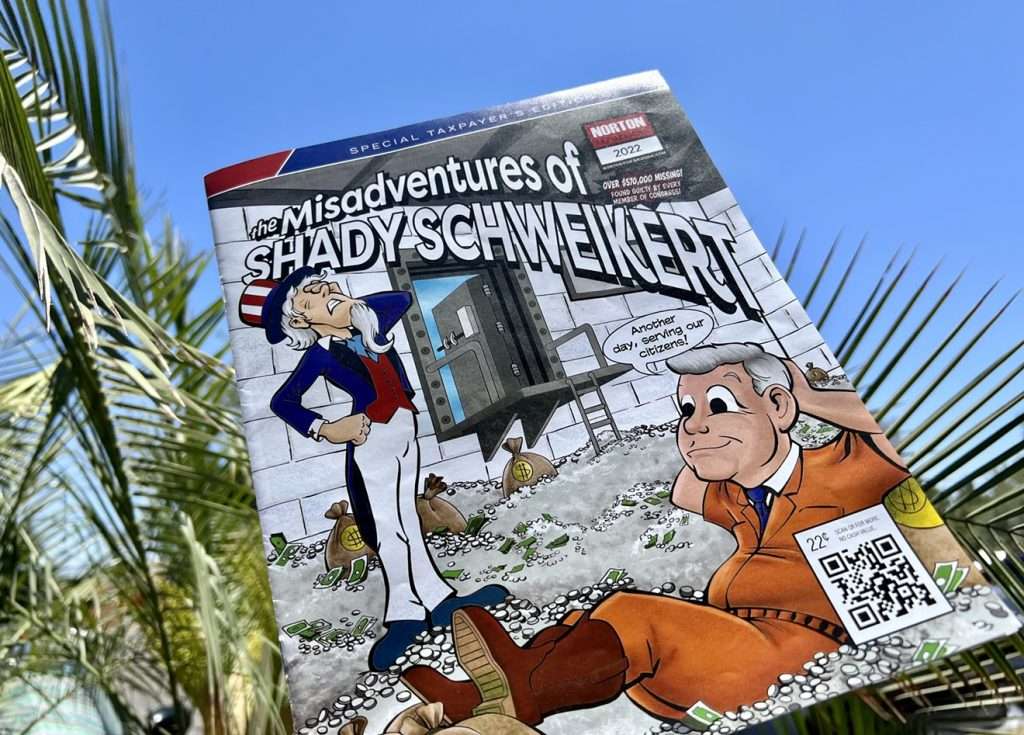 The Phoenix New Times told of a comic published by a Republican candidate in Arizona that was intended to criticize another from the same party, and it may be for the wrong reasons:

There’s a new supervillain in town, and he’s terrorizing the people of Arizona.

At least that’s the case according to new campaign literature coming from Elijah Norton, a political newcomer and entrepreneur from Scottsdale seeking to unseat U.S. Representative David Schweikert in this year’s Republican primary. […]

Nearly one in three households in the reliably Republican district will receive a comic book in the mail this week from Norton’s campaign.

Like in Superman or X-Men, this graphic depicts the dealings of a supervillain. But it’s not Lex Luthor or Magneto. It’s Shady Schweikert, a besmirched caricature of the incumbent congressman clad in an orange jumpsuit and blue baby bonnet.

Through six pages of sequential storytelling, Shady Schweikert accepts illegal campaign contributions and writes himself a fake loan, blowing the cash on first-class flights, tickets to the Super Bowl, and fancy dinners.

He’s ridiculed by prominent Democrats and Republicans, including the rest of Arizona’s Republican congressional delegation: Paul Gosar, Andy Biggs, and Debbie Lesko. Then the cartoon shows him getting thrown in a jail cell. All the while, a star-spangled Uncle Sam slowly changes his opinion of the sixth-term congressman from skeptical naïveté to one of total disdain, ultimately deeming the miscreant “corrupt.”

From what I know about Schweikert, he’s an opponent of illegal immigration, and a Trump supporter, so this suggests Norton’s attacking him for unjust reasons, and the weekly’s making a big deal out of this comic special of Norton’s simply because his policies coincide with theirs. In that case, it’s a shame the medium’s being exploited by a potential pseudo-conservative for the sake of bringing down a real deal whose positions are sincere.

Upcoming Animated Film on King David to be “Politically Correct”
Marvel Writer Jason Aaron Served as Consultant on Thor: Love & Thunder
Marvel's Latest Miles Morales What if...? Comic Leads to Hilarious Backlash
Flopyear: Disney Has Become It's Own Worst Enemy
Will Titan Comics Avoid Marvel's Recent Mistakes with Conan?
One of the Last of His Kind: A Look Back at Comics Artist Tim Sale
Winnie the Pooh & Piglet to Be Featured in a Bloody Horror Thriller