Geoff Johns’ Flashpoint Failed and Should Not Be Revisited

IGN wrote a puff piece interview with the overrated Johns, who’s revisiting Flashpoint, the event DC under DiDio used as an excuse to reboot most of their universe for what was probably less than 5 years, and went nowhere fast within that time:

11 years after it originally launched, it’s safe to say Flashpoint is one of the most important comics in Geoff Johns’ vast DC resume. That series not only introduced one of the most twisted incarnations of the DC Universe, it also paved the way for DC’s controversial New 52 relaunch. Flashpoint has gone on to inspired a number of DC’s live-action and animated projects, from the animated movie Justice League: The Flashpoint Paradox to The Flash: Season 3 to the upcoming Flash movie.

A confirmation they have no complaints how pointless Flashpoint turned out to be as a comics path. Worst is that it was clearly intended to serve as a wellspring for movies, as seen with the preparation of the Justice League movie, where Cyborg’s made into a cast member just like he was in the comics Johns wrote, retconning Vic Stone’s life with the Teen Titans. If they really wanted or needed to cast Cyborg in a League movie, they could’ve easily taken liberties with the source material and done it all without going to such lengths to forcibly retcon much of the DCU proper just to reach that point. If their direction doesn’t benefit the comics, then keep it all within the movies. Yet this has been the absurd norm for years, with publishers mandating changes to characters and series to both reflect the films and serve as something for brand new films to build on, as though the screenwriters couldn’t do it themselves. The changes made to X-Men when the overrated Grant Morrison was given the title by Joe Quesada at Marvel were just the beginning.

With that movie drawing renewed attention to Flashpoint, it’s hardly surprising DC would greenlight the sequel, Flashpoint Beyond. But for Johns, there’s no point in revisiting Flashpoint without a story worth telling. Now that Flashpoint Beyond #0 has arrived in stores, we finally have some idea of what that story involves.

But Johns has no stories worth telling. I wrote his resume off years ago, concluding it was a whole lot of overrated, weak nostalgia laced with disturbingly crude elements, and the Flash issue where the Top made people vomit with a power to screw up their eyesight was just one of the most repellent moments in Johns’ portfolio. 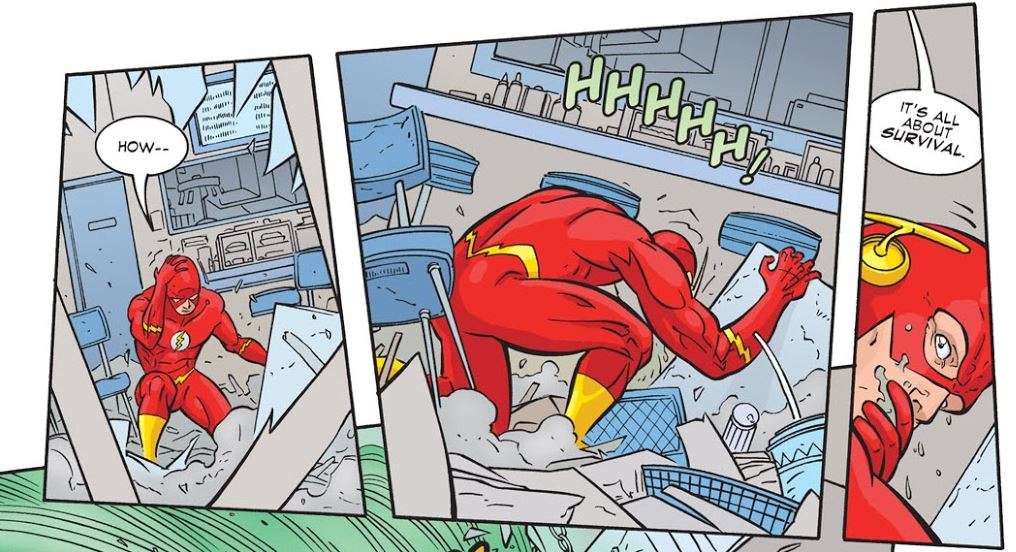 As bad as Flashpoint was, it was actually good if Johns was willing to jettison his past work when that came about.

The problem with publishing a sequel to Flashpoint is that the original series ended on a pretty definitive note. Flashpoint is created when Barry Allen travels back in time to prevent his mother’s murder, an act that winds up causing cascading changes across the DCU (not the least of which being Dr. Thomas Wayne becoming Batman after a young Bruce is murdered by Joe Chill). The series ends with Barry undoing that well-intentioned mistake and (more or less) restoring the regular DC timeline. The only physical remnant of the Flashpoint timeline is a letter Thomas Wayne wrote to his son.

Flashpoint briefly returned in the 2017 Batman/Flash crossover “The Button,” allowing Thomas to cross over into the regular DCU just before his world is annihilated for good. That set the stage for this older, more brutal version of Batman to become the main antagonist of Tom King’s Batman run. Having seen the pain and misery being Batman causes, Thomas becomes obsessed with convincing his son to give up the cape and cowl. He ultimately fails, of course. Thomas has lately been seen in the pages of Justice League Incarnate, slowly finding redemption alongside other heroes from throughout the DC multiverse. 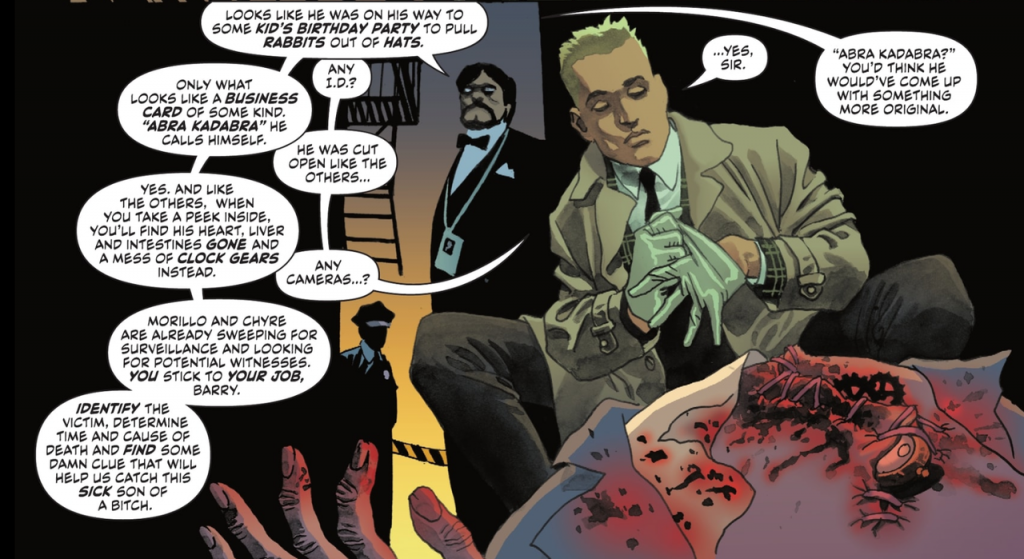 If it serves as something for a writer as insufferable as King to build on, that’s another confirmation why Johns’ work is worthless. King’s continued from where Johns left off as one of the worst contributors they’ve hired since the turn of the century, and it’s decidedly telling Johns never raised any complaints about Heroes in Crisis. If Hal Jordan were made into the bad guy of that artistic fiasco, Johns would likely have remained quiet then too.

However, as Flashpoint Beyond kicks off, Thomas is suddenly right back where he started. He now finds himself back in the Flashpoint timeline, trapped in a world ravaged by war and where his son is still dead. Everything he fought for in the original series has been for nothing. That, Johns explains, is the crux of his vision for this sequel.

“Every one of these stories, I always try to get to the emotion at its core,” Johns tells IGN. “With Barry Allen in the original Flashpoint, I think that emotional motivation and storyline was really clear. You could see him struggle with what he had done and trying to preserve it and trying to have everything, but he learned ultimately he couldn’t.”

Johns continues, “And in much the same way with this, with Flashpoint Beyond, it was looking at it from Thomas Wayne’s point of view and his story, what he is struggling with and, again, getting him back to being a Thomas Wayne Batman. He’s not a Bruce Wayne Batman. He’s never going to be. Even if he wants to be or tries to be, he’s just never going to be because that pain and that tragedy within him is too deep.”

As established in Flashpoint Beyond #0, Thomas is hellbent on erasing his world all over again, even if he has to shed some blood along the way. To him, this world and its people don’t matter, because he doesn’t view them as real.

Why wouldn’t it shock me if this turned out to be a metaphor for Donald Trump? Let’s also remember a decade ago, Johns made clear where he stands on the political map after he injected Islamic propaganda into Green Lantern, in one of the most blatant examples of divisive politics making inroads into DC, and look where it’s led to now by extension. And some “clearness” Johns employs alright. Not to mention “emotion”, which struck me even in the early years of his writing efforts as phony, because only too often, he seemed to be pretending to build up something meaningful, only to throw it away shortly after. The violence Flashpoint Beyond builds upon is a giveaway what’s wrong with his storytelling approach, which is meaningless beyond what it’s all come down to – company wide events and crossovers, which seems to be all he writes these days.

And that’s surely one of the saddest things about the sorry state of DC today. That some of their worst contributors will continue working for them till the bitter end of their business.