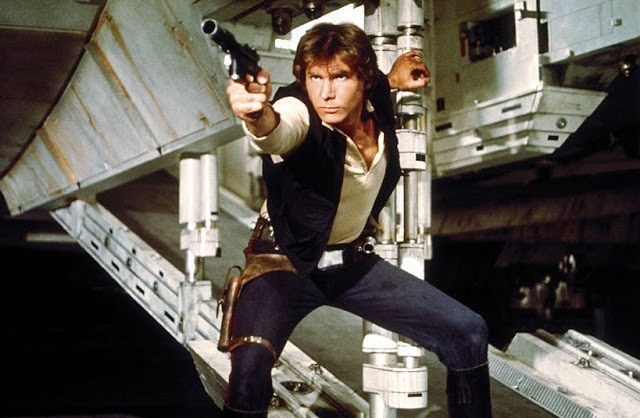 Whether one looks at comic books, fiction or film, firearms play a huge part in geek culture.  In fact, there’s an entire web site dedicated to document who carried what.
As alternative to my usual screeds, this feature will take a look at some of these iconic weapons – focusing on their real-world performance rather than in-universe function.  If there’s something you want to know more about, be sure to mention it in the comments.
First up is an item near and dear to generations of Star Wars fans: Han Solo’s Blaster. 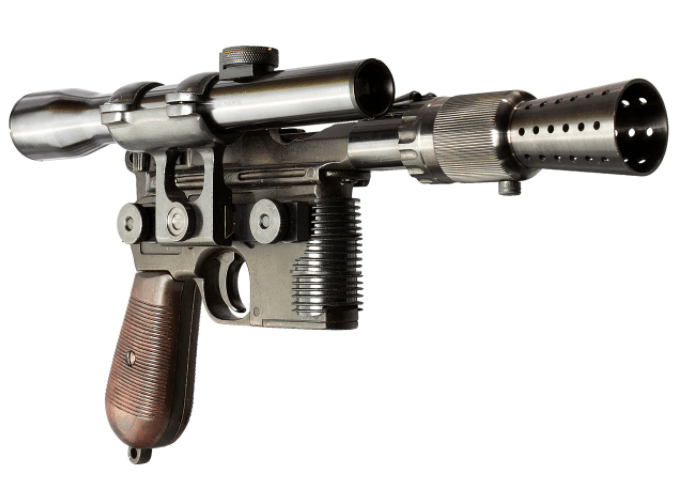 The BlasTech DL-44: A Modified Mauser C96 “Broomhandle”
Semi-automatic pistols (also known as “auto-loaders”) are about 130 years old and the first design to be both commercially and militarily successful was the Mauser C96, whose unusual grip earned it the nickname “Broomhandle.”
Entering the market in 1896, the C96 boasted a 10-round internal magazine which was reloaded by stripper clips.  (Note: clips and magazines are two different things.  A clip holds cartridges that feed into a magazine.)
At the time of its introduction, revolvers dominated the pistol market, and the C96 beat them in both capacity and reload speed.  Despite its considerable size, it is comfortable to shoot and very accurate out to a considerable distance.
These pistols often came with a combination holster/stock, which turned it into a handy carbine, making it perfect for mounted troops.  The C96 was a superbly successful design, remaining in production for more than 40 years and its design was copied around the world.  In the 1930s, full-auto versions with detachable box magazines emerged and when used with the holster/stock, were handle little submachineguns.
When introduced the 7.63mm Mauser cartridge was one of the highest-velocity pistol cartridges in the world, holding the record until the introduction of the .357 Magnum in the 1930s.  This was a function of its necked-down cartridge.  The base of the cartridge is roughly the size of a 9mm Luger, but necked down to create a smaller, faster bullet with a very flat trajectory and impressive penetration.  As noted above, the C96 was very popular with the Soviets, who found that it could penetrate even the thickest winter clothing – something not all pistols of the time could do.
In fact, when the Soviets came to design their own auto-loader, they based their concept on a John Browning design, but retained the cartridge dimensions, though they added a little extra powder for good measure.
This is why the Soviet 7.62mm Tokarev is identical in size to the 7.63mm Mauser, though it is too powerful to safely fire in the C96.  The Mauser ammunition, however, works just fine in the Tokarev and the other Soviet weapons chambered in that caliber.  During World War II, this allowed the Germans to scavenge Soviet submachineguns and pistols because they still produced ammunition suitable for use in them. 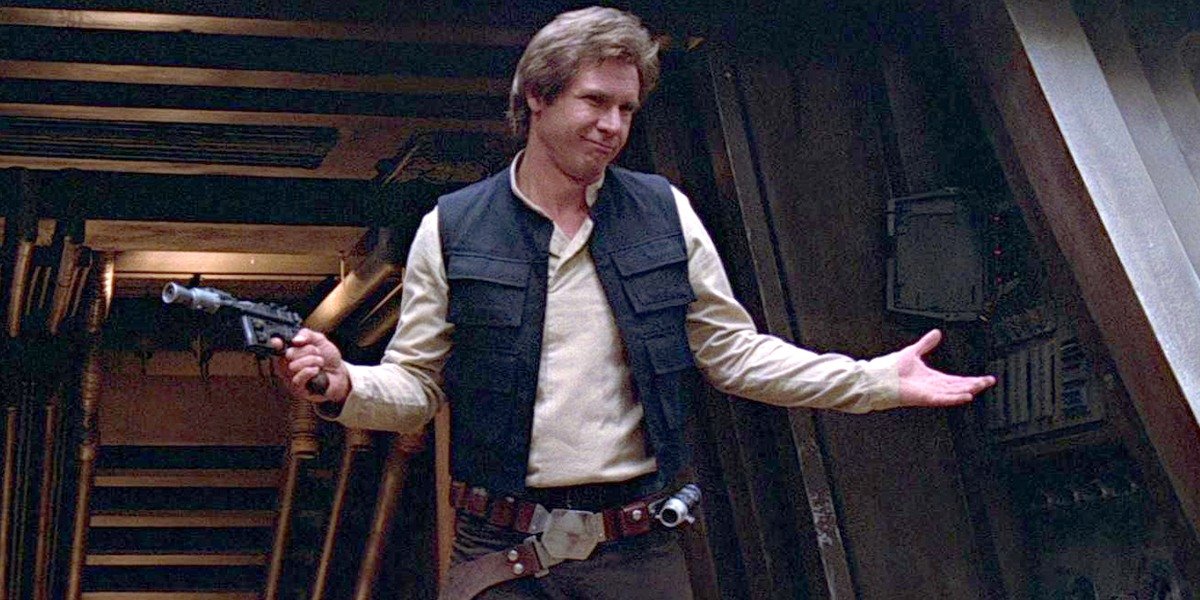 The Prop Modifications
Han Solo’s blaster was based on a post-World War I variant with a short barrel that was extremely popular with the Bolshevik regime in Russa, which earned it the nickname “Bolo.”  While lighter and handier than the full-size, it’s still an impressive piece of metal, and Han Solo’s drop holster is one of the better ways to carry one.
Because the C96 both loads and ejects out the top of the frame, the scope on Han’s pistol had to be offset.  This may seem strange, given that it’s supposed to be a laser blaster, with f/x added in post-production, but almost all of the weapons used in Star Wars fired blanks.  Under close examination, you can even see the cartridges ejecting.
Like many futuristic weapons based on real firearms, the prop department used various items to break up the look and shape, but the C96 is so distinct that there is no mistaking this. 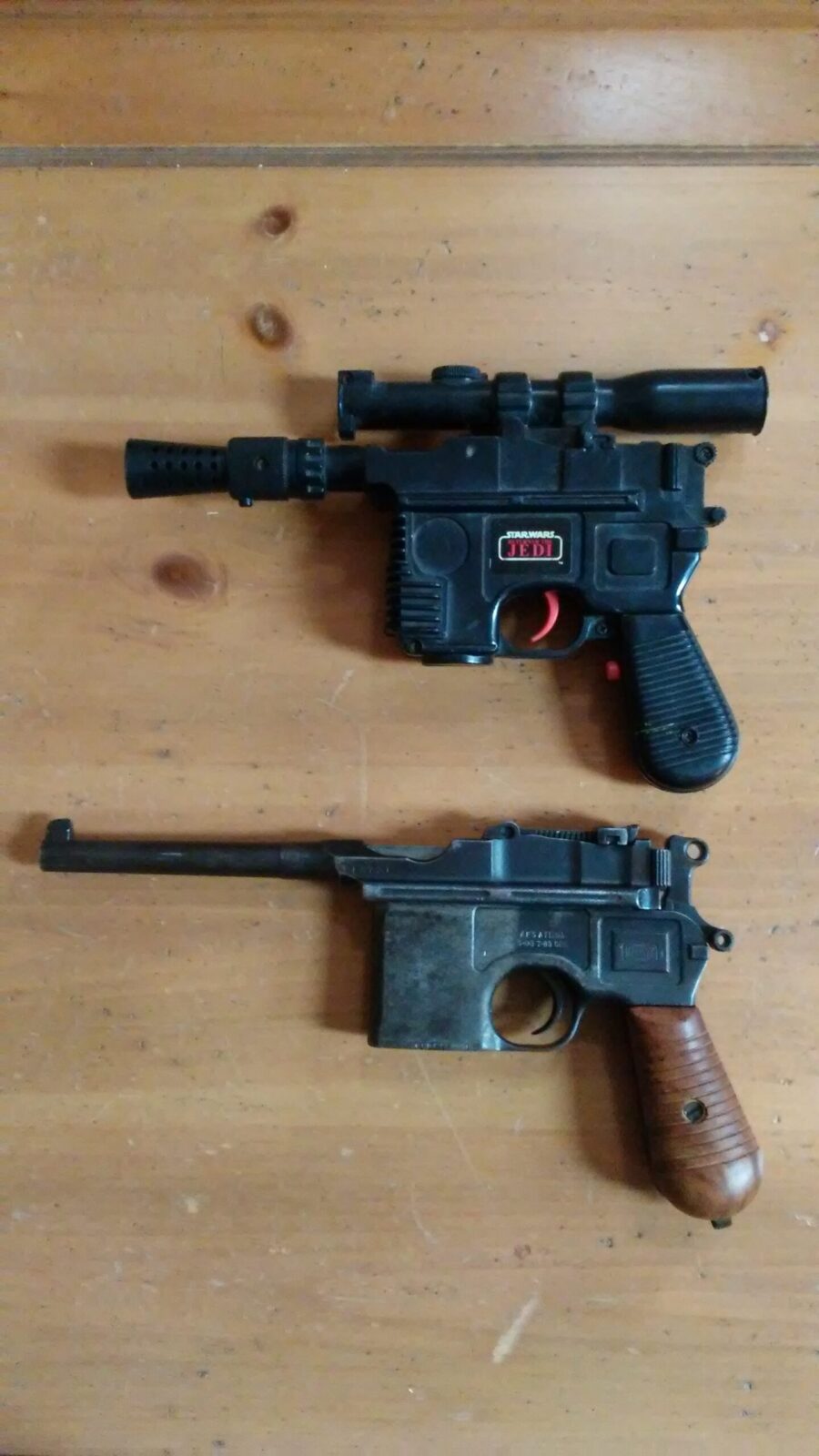 Actual Performance
The C96 has crisp recoil, but the weight and movement of the bolt take the edge off of it.  The trigger is very nice, and once one gets used to it, it is possible to channel your inner scoundrel and fire it accurately one-handed.  There is a lot of barrel rise, but the gun’s weight causes it to naturally fall right back on target.  If you can obtain a holster/stock and fit it to the butt, the pistol now becomes even easier to control and freakishly accurate.
While I have only fired the full-sized version, I imagine the “Bolo” would perform about the same, though the shorter barrel would increase felt recoil and lower ballistic performance.
There are full-auto versions out there (some made by Mauser, some Spanish or Chinese knock-offs), and while they are useful sub-guns with the stock fitted, numerous Youtube videos demonstrate the pistol is uncontrollable without it.
The C96 has a unique and cool aesthetic, and no less than Winston Churchill himself personally carried one into battle.  It’s no wonder that it was selected to be the basis for Han Solo’s weapon of choice.
If you want to own one, be prepared for some sticker shock.  These are highly collectible and ones in good condition can be very expensive. 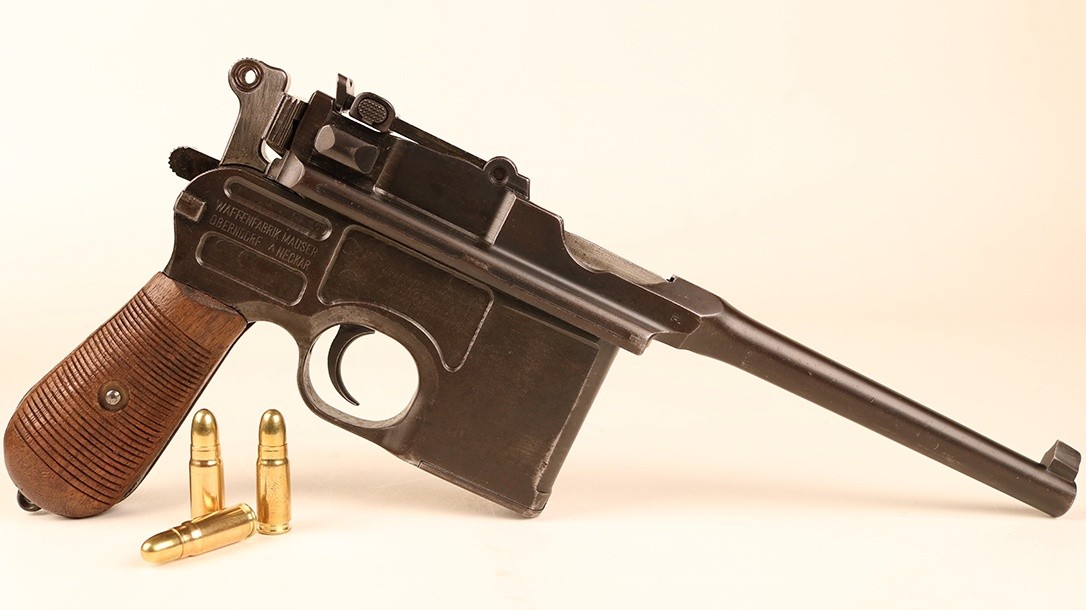