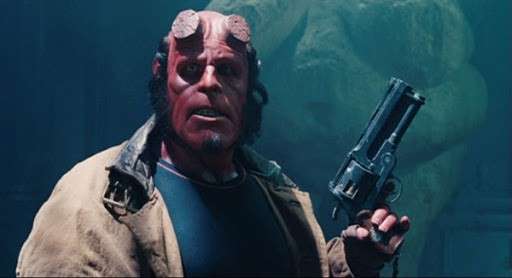 As alternative to my usual screeds, this feature will take a look at some of these iconic weapons – focusing on their real-world performance rather than in-universe function.  If there’s something you want to know more about, be sure to mention it in the comments.

This week we’re going to look at a Geek Gun unlike any other:  Hellboy’s hand cannon a.k.a.”The Samaritan.” 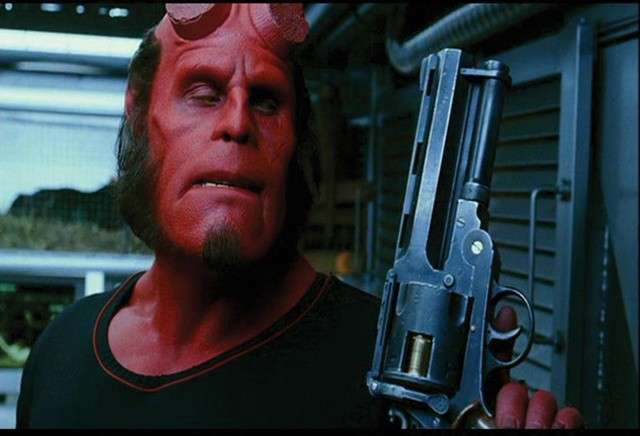 Old School Looks, Improbable Results
One of the rules of this feature is that it looks at real-world rather than in-universe firearms performance.  So how does one do that with a prop that was created from scratch than being a modification of an existing weapon?  The answer is to simply look at where the design came from.
The outline and mechanics of Hellboy’s sidearm are unquestionably derived from a Webley revolver, the most prominent of which was the World War I-era Mark VI.  Notice the flat-sided rather than rounded barrel and the top-break frame.  These features give the weapon a properly archaic and foreign appearance.
The Mark VI was chambered in a proprietary .455 cartridge that was originally loaded with black powder.  When smokeless powder came along, the British simply swapped out propellants but kept the same ballistic performance.  The result is big fat cartridge that throws an enormous soft-lead bullets and a very low muzzle velocity.  The Webley relies on the mass of its projectiles rather than their velocity to achieve its desired effect, and its 262-grain bullets are heavy enough to hurt when simply thrown by hand, let alone fired out of a gun.
The Samaritan, of course, is improbable in almost every aspect of its performance, no doubt a function of its supernatural construction and purpose.  Cartoonishly large-bore guns are an established trope in Geek culture and I have little to add the standard critique of such creations. 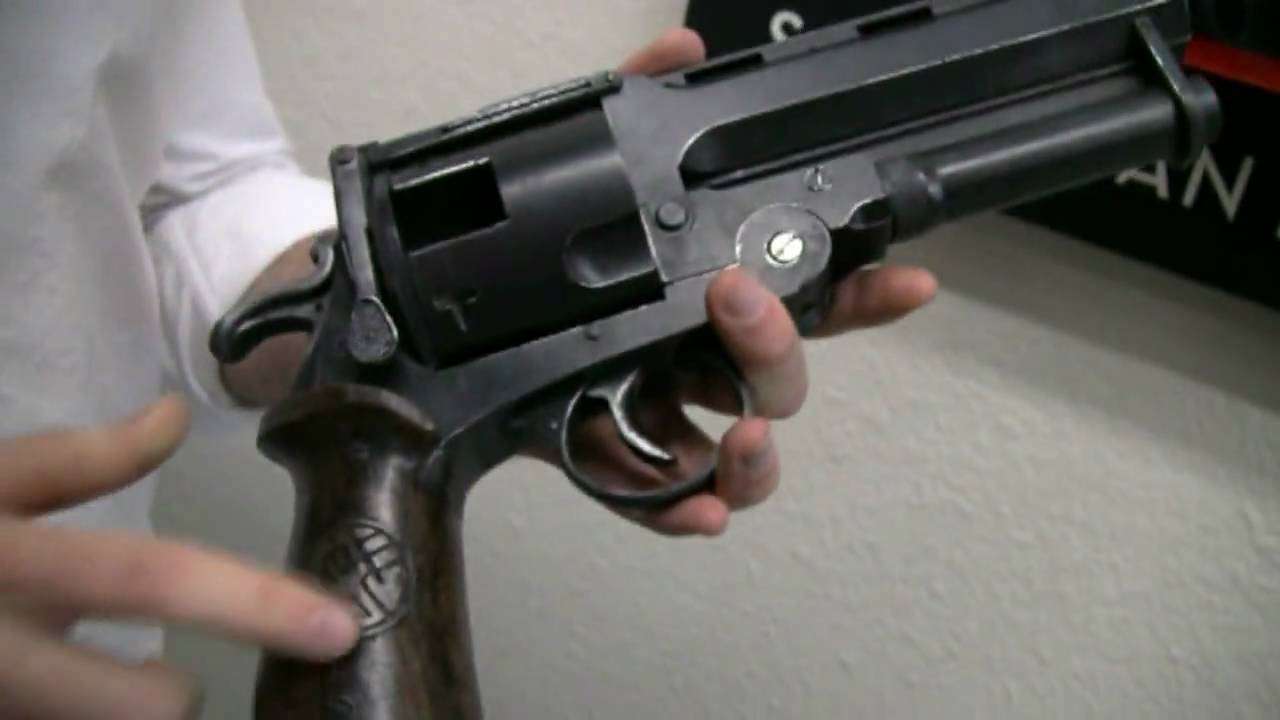 Large, Heavy and…Mild
The Webley Mk VI is a hefty chunk of metal, and its generous proportions obscure the fact that its barrel is in fact six inches long, which is unusual in a service pistol.  For all that, it points well and has decent balance.  The rear sights are fixed and it’s clear that this is designed for close-in fighting rather than long range engagements.  It is not particularly accurate.
The size and weight combine with the modest powder load to create a surprisingly mild-shooting weapon.  I’ve seen books describe .455 Webley as a heavy, powerful cartridge, but in practice it’s anything but.  Compared to the Mauser C96 (Han Solo’s blaster), this is pretty weak tea.
As for the hitting power, again, it’s like throwing a large, heavy rock – it doesn’t need to go that fast to do damage.  The trigger is incredibly heavy on double action, but reasonable when one cocks the hammer.  (And like all vintage revolvers, the firing pin is on the hammer, which is very retro-cool.) 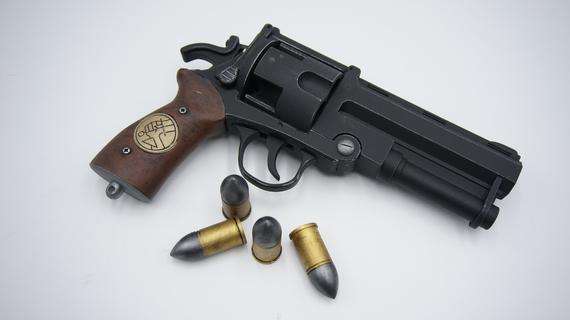 Buyer Beware – No, Really
One important point for those thinking of collecting one of these: after the war, many were sold as surplus on the American market and in the process had their cylinders milled down (collectors call them “shaved”).
This allowed American .45 ACP ammunition to be fed into them using half- or full-moon clips.  The problem is that even .45 ACP (hardly considered a “hot” round) is too powerful for the frame of the top-break frame Mk VI, and firing them in it can cause severe damage to the weapon.
By the way, The Samaritan would also suffer from the same defect.  If one looks at super-heavy revolvers, they all use a solid frame to support the cylinder.  Open frames simply can’t withstand that kind of force – unless they are made of mystic materials. 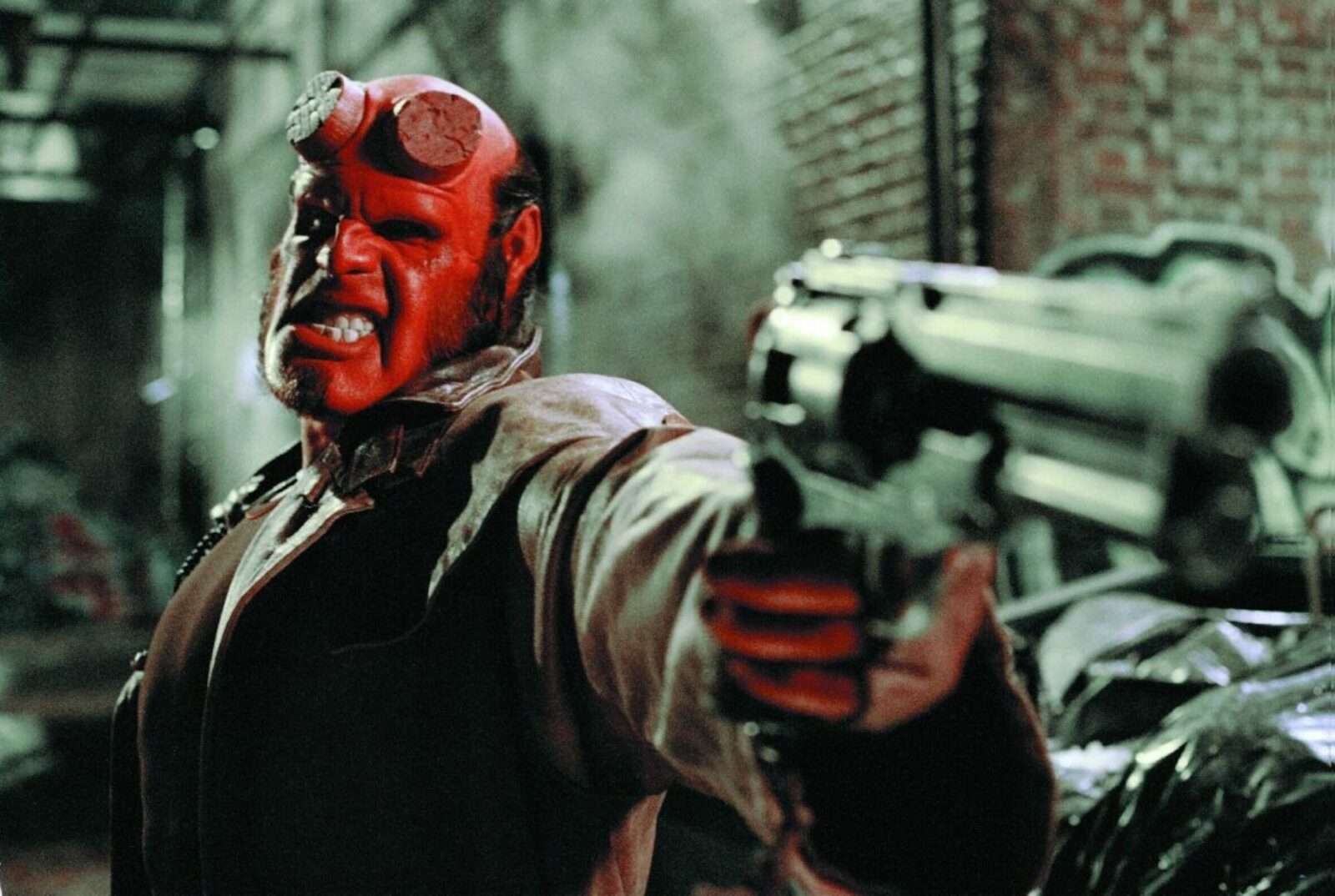 Webley Mk VIs are available – and expensive.   I’ve never come across a store that carries .455 ammunition, but it is available online.  It’s also expensive.
(Some people with shaved Webleys use custom loaded .45 ACP specially designed to not to stress the gun’s frame.  This is even more expensive.)
Still, one likes the look and feel of The Samaritan, they are probably the closing thing you can come to it on this side of reality.