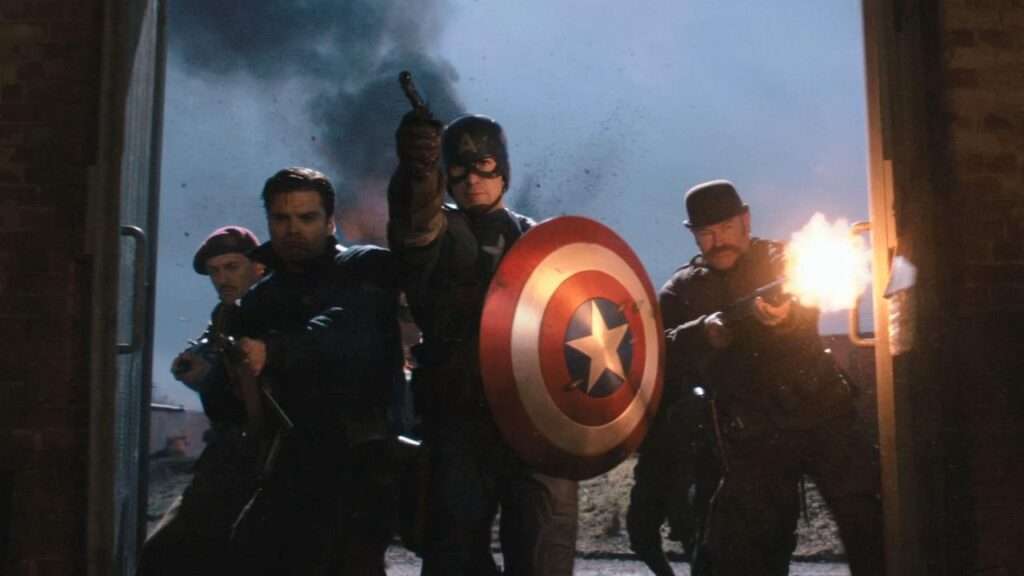 Though I am famously critical of many aspects of Captain America, Steve Rogers’ choice of the 1911A1 as his personal weapon is perfect.  The 1911 was the first self-loading pistol accepted for US military service, and the initial specification put out by the Army dictated that it should fire a hefty bullet of at least .45 caliber.  The resulting .45 ACP cartridge has been hailed as a perfect balance between power and accuracy ever since.  The 1911A1 is an updated version of the weapon, refined after its service in World War I.  The 1911A1 is a true “combat pistol,” hitting hard and boasting significant long-range accuracy.  Pairing it with an almost impenetrable shield makes for a formidable combination.
This may seem like a no-brainer prop-wise, but Marvel could have given Capt. Rogers some sort of experimental weapon, a Colt equivalent to Red Skull’s Laser Luger.  The decision to stick with what appears to be a standard mil-spec weapon was a good one and I give full  credit where it is due.
It’s interesting to note that the bullet shield-and-pistol combination is also something that happens in the real world, most famously with French elite counterterrorism forces.  Here again, we have a nice bit of realism to anchor a work of (often very unconvincing) fantasy.

It’s Not A Firearm, It’s a Genre

The advent of the internet has created niches for just about every conceivable interest group, but the 1911 had a following long before anyone thought about online communications.  Shows, conventions, matches and paper newsletters brought together collectors and afficionados of the 1911 to talk shop and compare notes on how to optimize their weapons.  Such was the interest that once the patents expired, “match-grade” versions of the 1911 began to appear on the market, and the original manufacturer, Colt, responded with its own line of “luxury” 1911s.    In addition to direct copies, a host of handguns use the 1911’s operating system.
It’s interesting to compare the 1911 with one of its close contemporaries, the Luger Parabellum P08.  While the Luger has a large following of its own and remained in use through World War II, its toggle-lock system is a developmental dead end.  Ironically, the Luger’s cartridge (9mm Parabellum aka 9×19) has proved far more popular than .45 ACP is now used by the US military (and just about everyone else).

The 1911 does have some considerable drawbacks in the modern age.  When it was introduced, its seven-round magazine capacity was better than competing revolvers, but in the decades since, high-capacity weapons have left it behind.  The size of the .45 ACP cartridge makes increasing that capacity difficult, which is why one sometimes sees 1911s with comically long magazines sticking out of the butt.
Speaking of .45 ACP, it is quite potent at close ranges, but because its not moving particularly fast, it loses energy more quickly than 9mm or .40 S&W at longer range.
There is also the fact that true 1911s are single-action only, and while they have a nice trigger, they rely on a pair of mechanical safeties to prevent accidental discharges.  There is a grip safety on the back strap and a mechanical safety on the frame.  The traditional carry posture was “cocked and locked,” meaning a round was in the chamber, the hammer cocked and the mechanical safety applied.  (In this mode, one could add an 8th round to the magazine, which is why auto-loaders often have a “+1” added to their potential capacity). 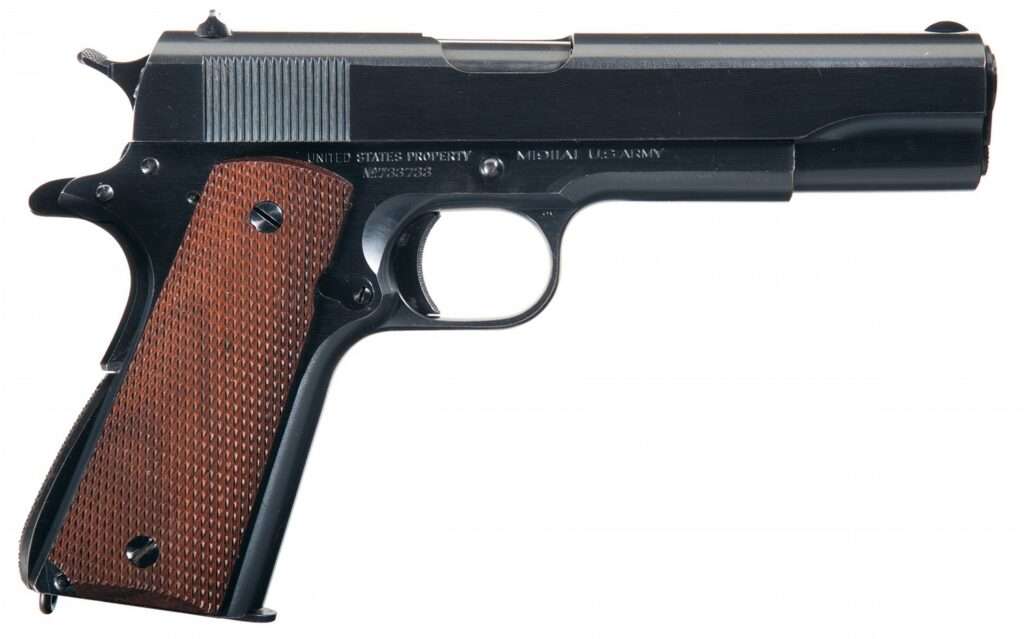 It has no docking lever and it is much more complicated to use safely than a modern pistol, such as a Glock.
Finally, there is the size and ergonomics of the thing, which can be challenging for people like me with small, soft, girlish hands.  While 1911s are pleasant to shoot, and one can shoot them quite well, they aren’t for everyone.

If you want to get all retro, there are plenty of 1911s out there, but they aren’t cheap.  This is one of those weird quirks in the firearms marketplace, where a type of gun is simultaneously very common but also very expensive.  Guns that can be claimed to be “war veterans” are even more expensive.
Two years ago when gun manufacturers were offering discounts and rebates to move stagnant inventory (I know, crazy how things have changed), I came across a set of firearms up for consignment from an estate.  It was a trove of beautifully-maintained and/or restored weapons, including a Luger, Mauser C-96 and even a Husqvarna M40, but the prize of the collection was a Colt 1911 manufactured in 1918.  Its price was higher than all the others combined – and it sold pretty quickly.
If you don’t have thousands of dollars to spend, you might consider buying one courtesy of the US government.