This week we’re going to look at a sleek stylish weapon from one of the most mood-centric action films ever made:  Kate Beckinsale’s Walther P99 from Underworld. Yes, I know she also shot some modified Beretta 92FS and several other sidearms also, but today we’re going to look at her German pistol from a brand that’s more commonly associated with a certain British spy…

Vampires vs Werewolves with Lots of Guns

In retrospect, the early Aughts were the glorious sunset of the 1990s Golden Age of Vampires.  Between the works Anne Rice, Buffy the Vampire Slayer, Blade and a host of other influences, vampirism was a going thing.  Even though I’m not that into the genre, it was part of the Geek Culture atmosphere, impossible to ignore.
Underworld was an extremely derivative film, but it brought the borrowed elements together perfectly, creating a plausible nocturnal environment in some crumbling mid-European capital where ancient houses settled ancient scores.  Nothing new here, but two things set it apart:  the quality of gun play and Kate Beckinsale.

Underworld (2003) Official Trailer 1 - Kate Beckinsale Movie
Having an attractive woman fire blanks is nothing new in cinema, and while Beckinsale is more attractive than most, what sets her apart is her clear competence with the weapons.  I’ve mentioned this before but it bears repeating: one of the reasons so many Hollywood shoot ’em ups have actors wearing sunglasses is that most of them flinch and blink while shooting.  Beckinsale does the two-fisted full-auto mode with pure wide-eyed intensity.
Yes, she’s using blanks (it is a movie, you know), but she handles her weapons with confidence and skill.  There’s an interview somewhere (probably memory-holed now to protect her career) where she admits to having a pistol for home defense.  She clearly put that practice to good use. 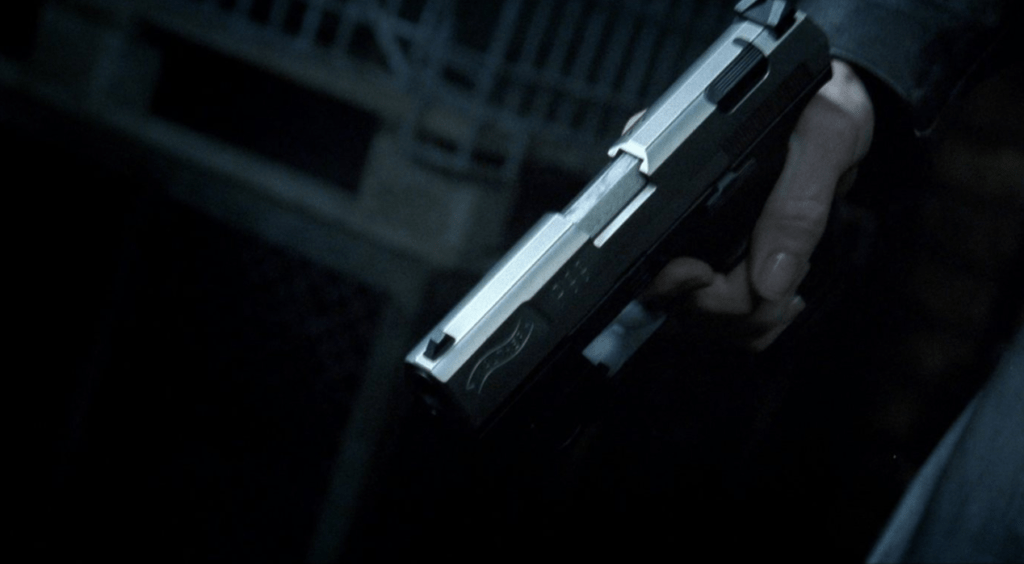 As for other weapons, there’s plenty for everyone, and even a Desert Eagle makes a prominent appearance (with glowing bullets!  How cool is that?).  One aspect I particularly enjoy is the terrible accuracy achieved by all the mag-dumping going on.  Usually in movies, people spray bullets and do so with perfect accuracy, but in Underworld, hits are harder to come by. 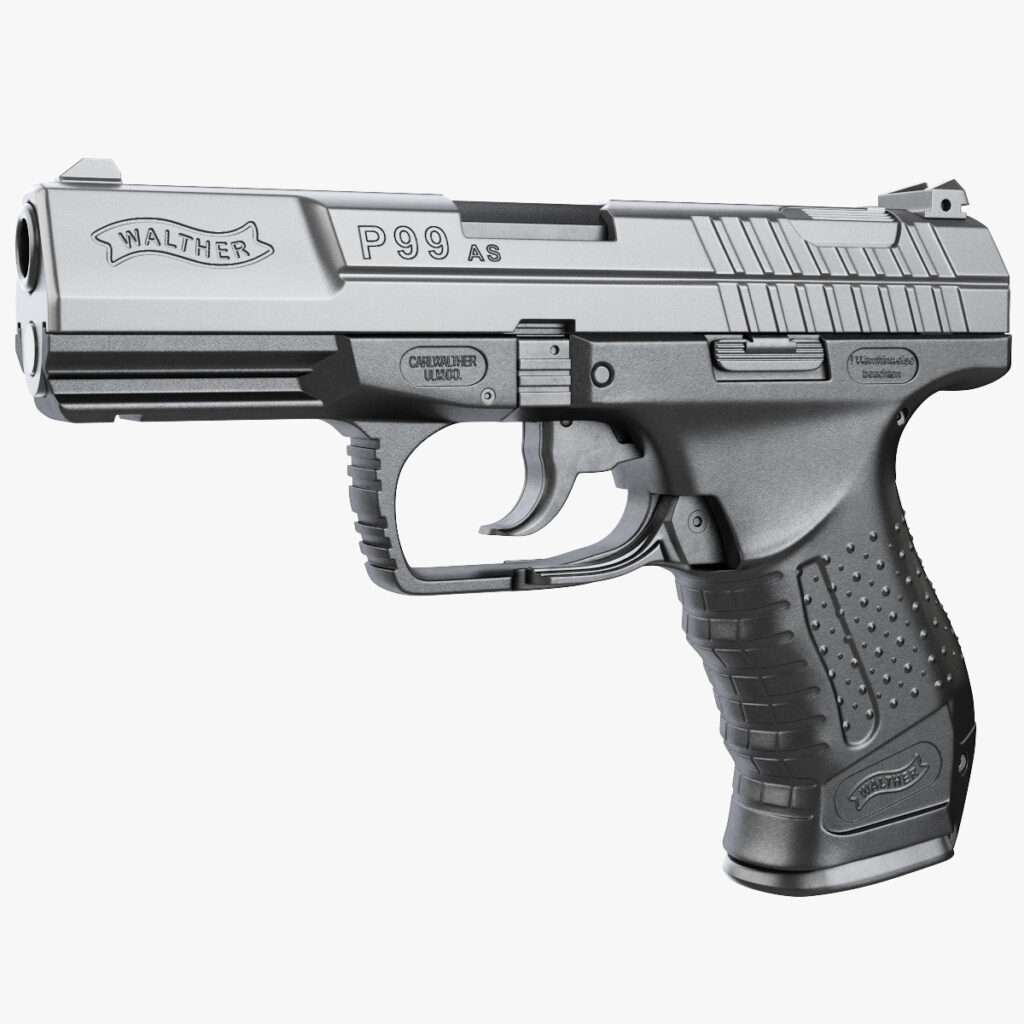 Yeah, hate on me all you want Glockheads, but Walther just makes superior products.  Beckinsale’s P99s with titanium-toned slides are utterly gorgeous and the director knows it, giving up precious screen time just to highlight their beauty.  Of course, these are her backup weapons, the primaries being Beretta 92s modified for full-auto fire.  I’ve hammered this point home pretty thoroughly so I’ll just mention in passing that full-auto handguns are a terrible idea.
Back to the Walthers.  The P99 is, like the Glock, streamlined, with a minimum of gadgetry to distract the user.  It’s high-capacity and striker-fired, but unlike the Glock, the trigger has more nuance – there are several different options.  Indeed, when people speak of a “Walther trigger,” it’s a compliment; the “Glock trigger” is not.  The grips are also more comfortable than the Glocks’ for most users.  These advantages come with a higher retail price, but in my informed opinion, the Walthers are not only worth it, but it makes sense that a vampire would use a more upscale firearm than an Austrian Hi Point.  In fact, even among Walthers, she’s got a wonderful pair. 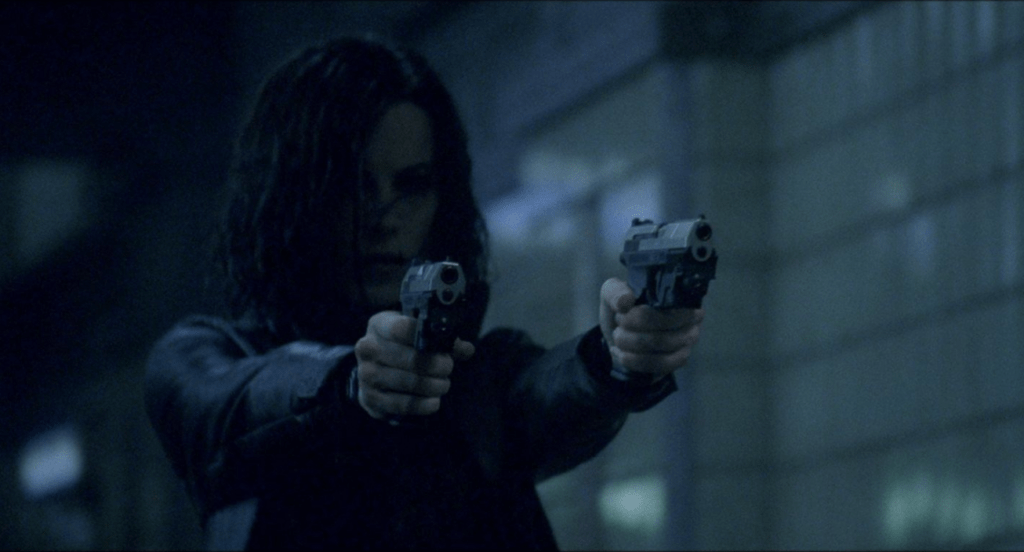 The P99 used to be the mainstay of the Walther line, but the PPQ seems to be taking over that space.  Still, until the COVID, they weren’t difficult to find or too expensive to purchase.  Now it’s basically the luck of the draw.
Re-creating Becksale’s armory is therefore possible, but expensive.  If one wants to experience the pleasure of shooting a baseline P99, the costs are more reasonable.
Either way, there is no denying that the Walther P99 is the prefect compliment to the mood and feel of Underworld.