Today we’re going to look at a small gun that made a big bang in 1975’s classic dystopian film Rollerball:  The Incinerator.
Rollerball Official Trailer #1 - James Caan Movie (1975) HD
Living in a Paranoid ’70s Movie
The 1970s produced a bumper crop of pessimistic films depicting a nightmarish future – so much so that Space: 1999 seemed wildly optimistic.  If the diseases didn’t wipe us all out (The Omega Man), we’d all end up indulging on process food cannibalism (Soylent Green), assuming of course that we didn’t just kill everyone over 30 (Logan’s Run) or have flying stone heads distribute guns (Zardoz).
Arguably Rollerball came closest to the truth, and its vision of a world distracted by sports and ruled by corporations who have total control over the information flow was eerily prescient.
There is not a lot of gunplay in the film since most of its action sequences take place in the arena.  However, the otherwise unnamed Incinerator plays a significant part in demonstrating the idle destructive power of the ruling class. 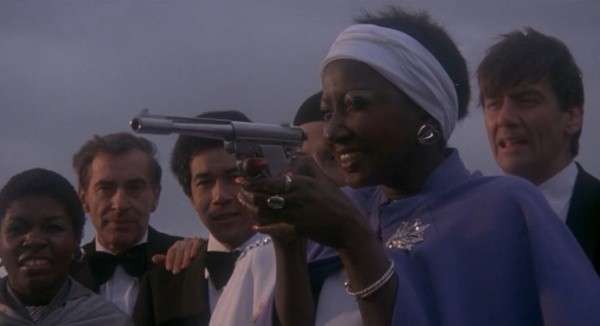 Guns as Class Status Symbols
During the 1990s and into the early 2000s, a heated debate took place in the United States on the question of whether gun control was an effective way to reduce violent crime.   A particular question was whether “shall-issue” laws that permitted widespread use of concealed firearms caused or reduced violent crime.  By 2010, the verdict was clear: everywhere such laws were adopted, the dire predictions of “Wild West shootouts” failed to materialize.  My home state of Michigan, for example, went from 50,000 concealed licensees in 2001 to six times as many only a few years later after the law was changed.  Violent crime fell sharply, particularly in Detroit, confounding gun control proponents.
With the facts beyond honest dispute, the debate shifted into a dishonest one, and gun control became a moral imperative.  By couching the debate in such terms, supporters attempted to remove it from the realm of rational policy where it could be judged on actual results, which meant that traditional metrics – lives lost, damage to society – were now secondary concerns at best.  Societal salvation was at stake, and rising murders, rapes and robberies were simply collateral damage on the march to a more perfect world.  Oddly, this coincided with a rise in anti-incarceration rhetoric, which makes no sense. If guns are banned but no one will go to prison for breaking the law, what is the point?
Rollerball gave us the answer during the brief appearance of the Incinerator: weapons of such power belong solely with the upper crust, whose casual use of their destructive power is just another instance of their unlimited privilege.  Note well in the scene that none of the rules of gun safety are being followed.  The party is heavily intoxicated, muzzle awareness is nonexistent, and they’re simply laying waste to whatever is handy, secure in the knowledge that they are above accountability. 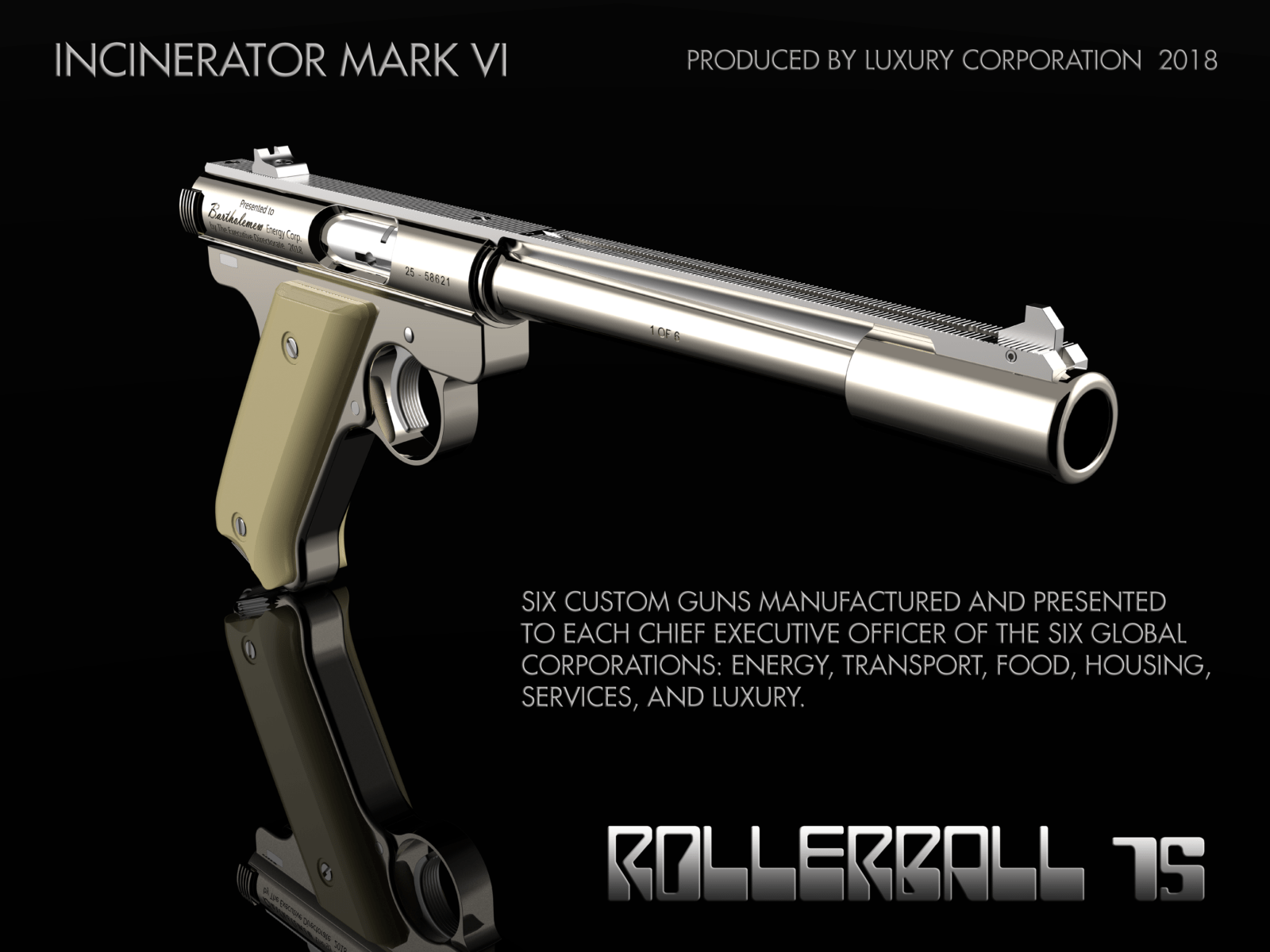 Ruger Resting in the Lap of Luxury
As to the prop itself, it takes more than a barrel extension and fancy grips to disguise the distinctive shape of the venerable Ruger Standard.  This was the first design produced by Sturm and Ruger, and while it is currently on its fourth iteration, it remains a mainstay of the shooting community, beloved by experts and novices alike.
Far from being a luxury item, the Standard is perhaps the most-used training aid for new shooters.  It is chambered in .22 Long Rifle making it mild to shoot but very accurate.  Indeed, its use in basic pistol training is almost ubiquitous, even today.  Just about every collector either owns one, has owned one, or trained on one.
At the same time, the Standard is beloved by precision target shooters, and upscale variants with specialized sights, extended barrels and custom triggers are well known within the community.
Far from being able to demolish trees, .22 LR is a diminutive round, suitable only for small game though it can be pressed into service as a self-defense round.  Uniquely among modern cartridges, it uses rimfire rather than having the primer in the center of the cartridge base, which makes it less reliable than other cartridges.  For this reason along with its modest size, most authorities on self-defense suggest something else. 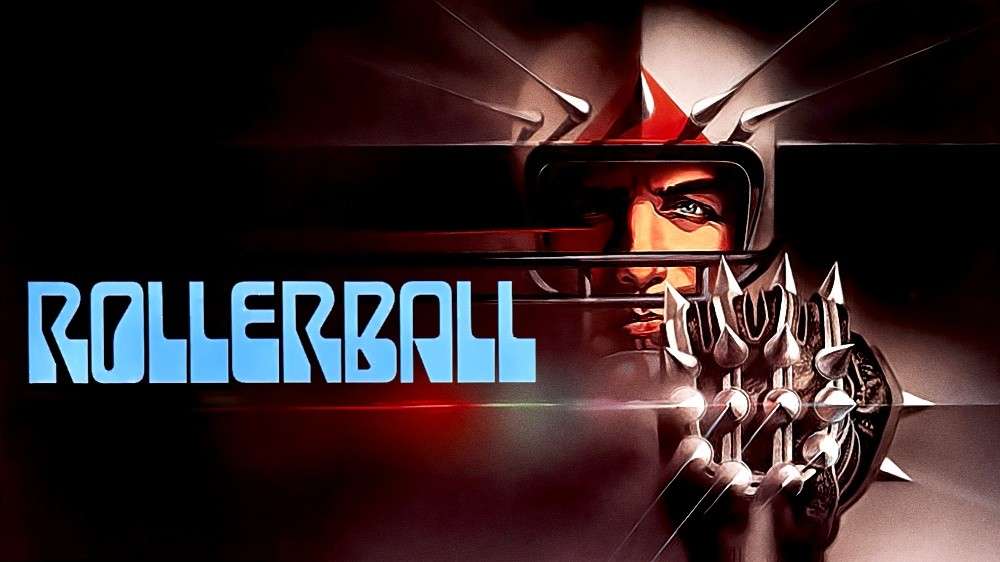 With the current buying frenzy, these are harder to find (and more expensive), and while their ammunition used to be easy to obtain, everything is running short these days.
Based on a survey of my local stores, Tannerite (a pyrotechnic target) is still readily available, so while you can’t yet skate around the arena in a football helmet waving spiked gloves, you can at least pretend you are destroying John Houseman’s shrubbery.