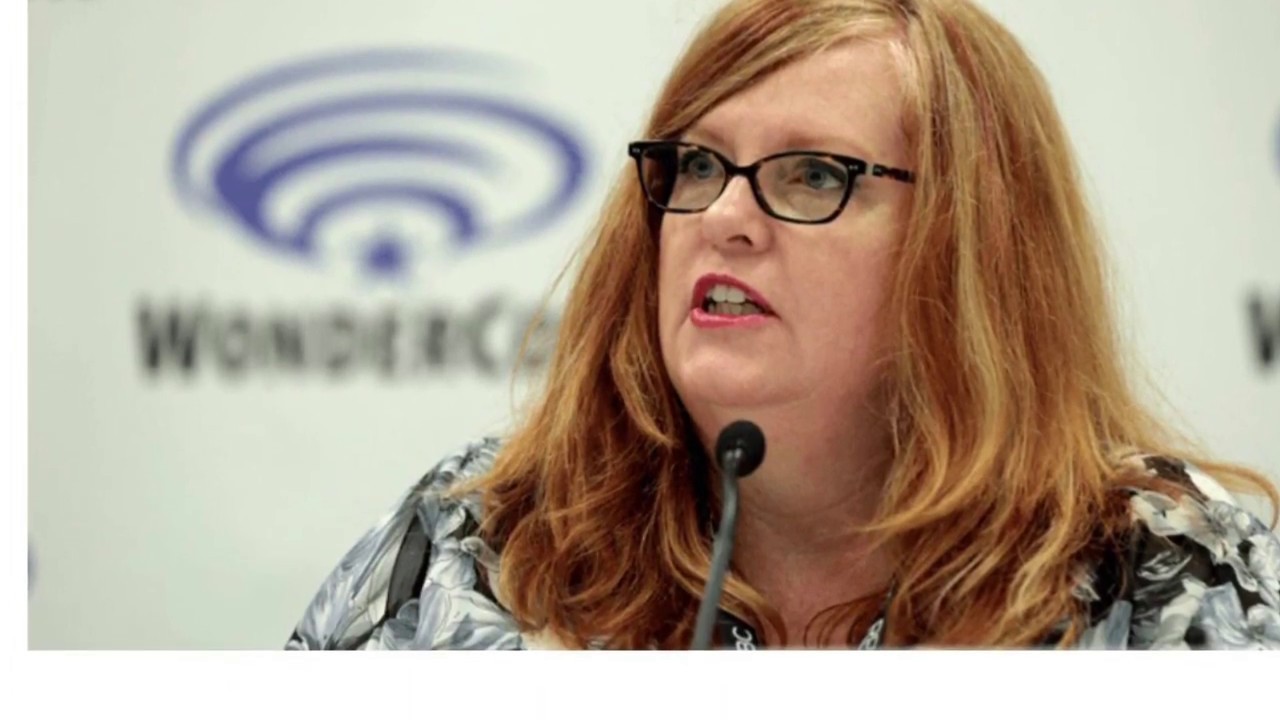 Here’s an example of SJWs throwing somebody they allegedly were fans of under the bus, because according to them, he supports Comicsgate without their permission. Gail Simone went out of her way to write an incitement via Facebook post against Nexus and Badger co-creator Mike Baron, leading to a whole thread full of vitriol by her horde of worshipers, including from at least a few leftist writers like Mark Waid, John Layman and Dan Slott.
She said:

Here’s an interesting little thing. It’s obnoxious, and it would have been meaningless, but, well, read on.

So, there’s some gross, sad doofus comicsgater, I don’t even remember his handle, and he posted this mocked up photo below. Now, I don’t care about these idiots, the smartest of them is still a complete idiot. And yes, they are bigoted to their core.

So he posted the photo below, with this award-worth caption:
**BREAKING NEWS**

Gail Simone banned from all SEA WORLD theme parks after she broke into the fish storage center and ate all the Dolphin feed. When Gail was asked to comment, she replied, “those fucking dolphin are next!”

Now, no one ever said these idiots were funny. And the guy’s photo of himself, well, let’s just say there’s some irony here.

Big deal, I get this stuff every day from these people.

But it gets worse.

Another Dorothy Parker-level wit responded with, “You know who should write comics? Fat bitter cat ladies.”

Again, not even worth mentioning.

But then Michal Michael A. Baron decided to agree with them.

Now, I’ve seen a lot of the comicsgaters. If personal attractiveness is the hill they want to die on, instead of making actual comics, fine. It’s ironic, but fine.

But Mike Baron was a writing hero of mine. A big, big deal to me.

I loved his work, I thought it was funny and to this day, his action scenes are a big influence on me.

I was never a huge Nexus fan, but his Badger and Flash and other works were huge influences. When I finally got to meet him we had a very pleasant chat despite me being a little star struck.

Hmm, let me take a moment to ponder her lack of fandom for Nexus. Is that implying she didn’t find the anti-commie viewpoint appealing? Well I’m sure there’s quite a few other leftists in comicdom today who’d not only shun his work because of that, they’d also shun Stan Lee’s stories from the Silver Age that were anti-commie too.

But he threw in with the comicsgaters, fine, that’s his call. Last year, he asked to send a book to my house so I could blurb it. I don’t want comicsgaters sending stuff to my house, so I said no. Maybe that’s why.

But for a pro you really looked up to to endorse this behavior and participate in it…well, it’s gross. Despite what these geniuses say, it has not always been easy being female in comics. It’s been fifteen years of hate mail, and the occasional death threat, including one guy who showed up at a Dallas signing and left bullets at the store after promising a ‘comic book apocalypse.’

A simple, ‘that’s not cool,’ would seem to be the bare minimum, rather than jumping in. But apparently, that’s too much to ask of Mike.

As it so happens, and he said so in the comments section, he was only joking:

I was just being flip. I did not mean Gail.

And he also said:

You have my apology.

And he even argued:

I am not a comicsgater. I reject that term.

But alas, it meant zip to Gail’s zombies, including Waid, who said:

Michael A. Baron Fuck off, Mike. I’m with Gail–you used to be someone I looked up to. She’s doing you a huge favor by not additionally calling you out, deservedly, for far more. I feel genuinely sad for most comics creators who fall into obscurity, totally forgotten by the modern audience. Not you.

The biggest problem here is the sheer lacking of a sense of humor from Simone’s side, and here she’s somebody who made a name for herself with tongue-in-cheek storytelling. But when it comes down to leftists like her, she suddenly loses it, and lacks a thick skin. And if her refusal to offer a blurb for a book over a year ago says something, her rejection of Baron stretches back at least a bit. As for Waid, he’s just demonstrated more lack of etiquette, and it’s highly unlikely he ever felt sorry for Baron getting blacklisted by the Big Two after the turn of the century. In fact, I wouldn’t be shocked if Waid never cared for Baron’s past work, if he perceived it as right-wing. Waid also said:

I think some, maybe a lot, of Mike and his peers’ turn to bitterness and hatred is attributable to refusing to come to terms with the unfortunate reality that every creator, still talented, eventually “ages out” as far as the audience is concerned. (I’m well aware I’m about a half-hour away.) They lash out and blame it on liberals or “diversity hiring” or whatever else is a convenient scapegoat and become cauldrons of hate. The good news is, you’ll be remembered for your contributions by future generations of readers who haven’t a clue why Mike Baron was once important.

And I think Waid’s pretty bitter that he’s now facing a lawsuit over tortious interference of a graphic novelist’s work, to say nothing of how he may never work for the more major companies again at ease after what was discovered about him. That very bitterness compounds his downfall

Simone then updated, claiming she’d conversed with Baron in private, and:

Update: I had a discussion with Mike here on Facebook messenger. I wouldn’t say it was encouraging, but he says that he never complained about not being offered work, which may be true, that bit was more general because I hear it so often. So in fairness, I removed it.

He also says he ‘rejects’ the term comicsgate, but oddly, because he believes it was a term placed on the movement by outsiders, he was unaware that it comes from Gamergate, the tag created by a VERY conservative actor for that group.

He didn’t disavow what they do or say, just the name, as far as I can tell.

It’s a bit disappointing, I admit it, but the one superpower I have is putting this stuff in the rearview mirror. I don’t FORGET, but I don’t sit and dwell on it, either.

If Baron’s not disavowing his joke, he’s honestly doing the right thing. Nor should he worry about not being offered work today, all because hardcore leftists are getting worse in their conduct, and blacklisting conservatives. IMO, he needn’t maintain ties with people like Simone either, if they’re going to become that awful. Besides, if she doesn’t sit or dwell on all this stuff, why’d she make such a stink about it in the first place? She later added a brief followup where she stated:

Part of the reason some pros get pushed around online is they feel ashamed or embarrassed, so they just try to move past it, and don’t respond, don’t illuminate what is being thrown at them by people who should know better.

I am not that person.

And I am going to blast you twice as hard if you are harassing marginalized creators as part of your dipshit hate group.

Again, she shouldn’t have opened her big mouth if she’s not that kind of person. Nor would she even acknowledge Comicsgate’s existence, if that’s how she feels. And would she kindly tone down all that revolting profanity for a change? Even I don’t use that much amount in my writings. Let’s also not forget she supported allowing male transvestites into women’s bathrooms at the expense of ladies’ safety, and she even worked on at least one project the recently disgraced Eric Esquivel also contributed to, and conversed with him as far back as 2010. (Update: here’s also a screencap I’ve added on the side.) So she’d do well not to lecture us either. 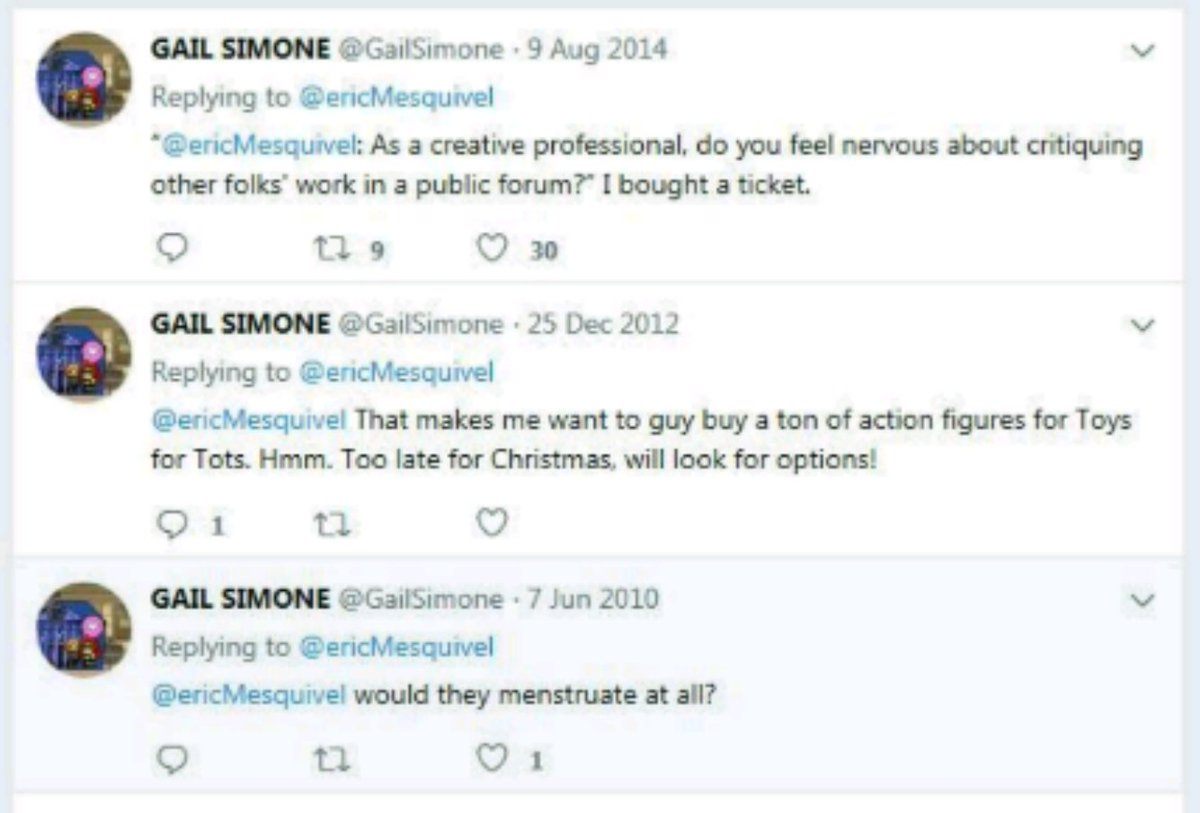 Sooner or later, Simone’s bitter attitude is going to ensure the collapse of her career, seeing as Domino’s a pretty low seller, with dismal interior art. Plus it isn’t as though Lion Forge is doing that well either. Her tirade against Baron only makes me feel all the prouder to own some of his works like Nexus, Flash and Punisher stories.

Someday, I’ll see if I can find Badger too.