Four Long Overdue Movie Sequels that MUST Be Made

Ghostbusters: Afterlife hit theaters last month and it’s apparently amazing, or at least good enough to wash the bad taste of 2016’s abomination out the minds of Ghostbusters fans. That’s a big relief to fans of 1984 original, which is today considered one of the great horror-comedy sci-fi films of all time. After the Lady Ghostbusters took a dump on the franchise, the 2021 sequel simply had to be made.

So that got me thinking: what other sequels do I think must be made?

This was what fans were all hoping for when we heard Alien 3 was coming out in the early 1990s. In fact, one of the trailers clearly implied the setting of the film would be Earth. Instead we got what we got: a meh offering not all that different from 1979’s Alien. A few years later, we still didn’t get what we wanted as Alien: Resurrection focused on, well, whatever it did.

In the superb Dark Horse Comics sequels to Aliens, the deadly xenomorphs make it to Earth via a derelict space freighter whose pilot has been impregnated by an Alien queen. The Company quickly takes advantage and whisks the pilot off into its secret labs; needless to say, things don’t go exactly how it planned. Why hasn’t a version of this story been done for the silver screen? The comic’s writer, Mark Verheiden, has worked in Hollywood after all. 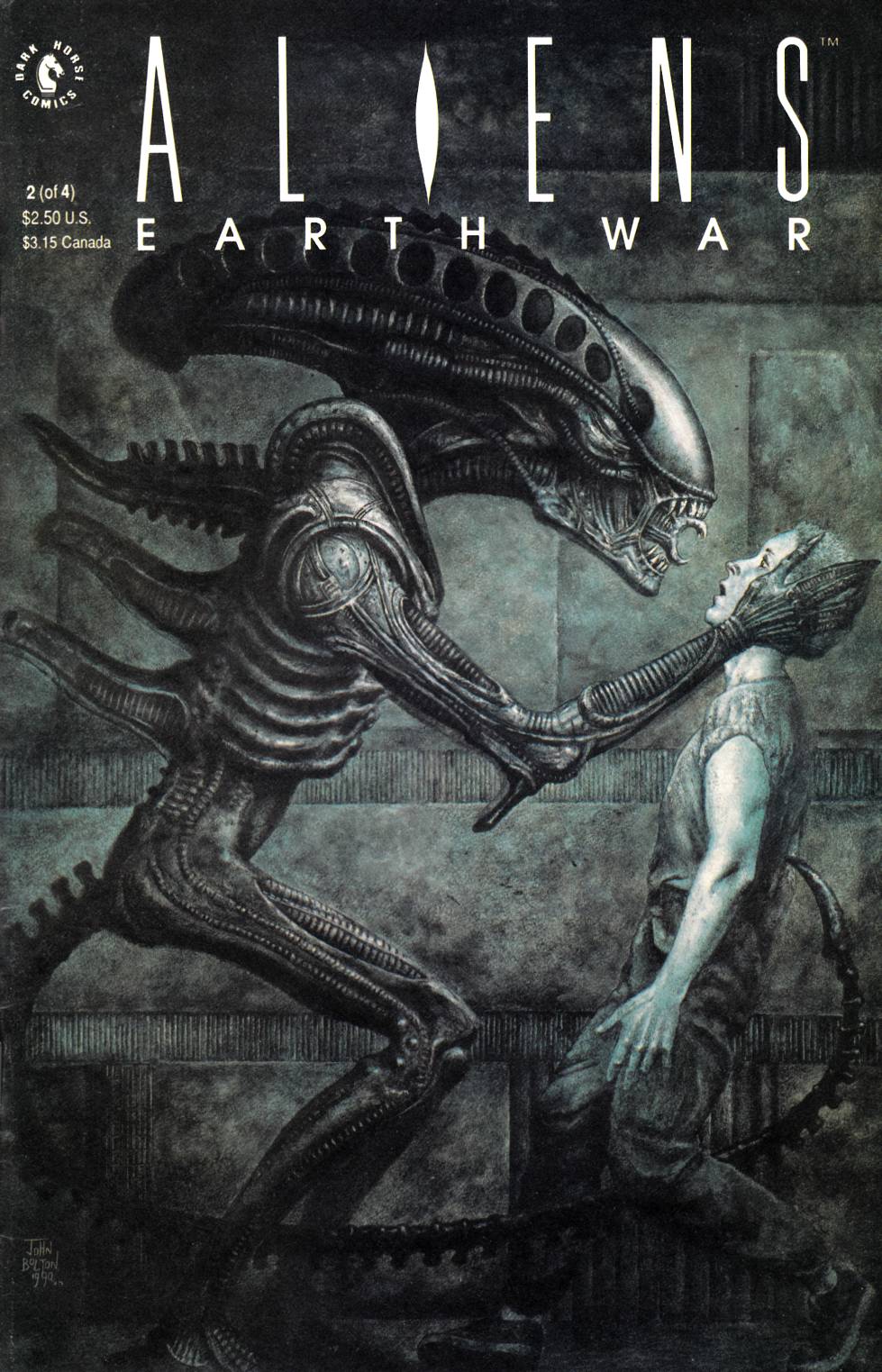 Why a Sequel Would Rock: The four Alien films all relied on basically the same premise: Humans fighting xenomorphs in a more-or-less closed setting. Only the sequel to Aliens vs. Predator approached the idea of a planet-wide catastrophe, but by then fans were bored, and besides — the Predators took care of the Alien scourge for us. Ever see the climax to 1985’s Lifeforce? Imagine scenes like its London worldwide as the xenomorphs inexorably spread across the planet.

It’s going on forty years since John Carpenter’s phenomenal remake of the 1951 classic. And what have we gotten? A rather lame prequel in 2011. C’MAHN!! Carpenter’s horror/scifi winner just screams sequel given its final scene: MacReady and Childs sit among the flaming wreckage of the American Antarctic base just waiting to die of cold. We were all wondering “WHAT IF ONE OF THEM IS THE THING??”

How easy is it to pick up virtually right after the “deaths” of these two? Have the occupants of another research station come upon their base …or an American rescue team a few weeks later. The prospects and plot twist possibilities are endless.

Sure there have been some attempts though other media to answer these questions. Back in 2002 The Thing video game served as a sequel to Carpenter’s film, and seemed to definitively answer some of these questions, and in 2005, Syfy had a four-hour sequel miniseries named Return of the Thing planned, but it was cancelled. That’s probably a good thing. And since I’ve been so impressed with Dark Horse Comics‘ Aliens comics, I really ought to check out their attempt at a sequel with Thing From Another World.

Word is that a reboot of The Thing by Blumhouse Productions and Carpenter himself seems to be in talks, but is still its initial stages. Although it is unclear if it’s going to be a prequel, sequel, or a remake, the narrative of The Thing, it should definitely be crafted as a full-fledged sequel in its own right, instead of simply revamping it as the prequel tried to do. And just a bit of advice: Do not rely exclusively on CGI for the F/X — that was one of the pitfalls of the prequel (see below). Despite the cheese, the 1982 film’s F/X outclass those of the prequel.

Why a Sequel Would Rock: I mean, what fan of this film doesn’t want to see a definitive resolution? Is Mac the thing now? Was Childs? Something/someone else somewhere in the slowly freezing camp? We wanna know!!!

STAR TREK: THE RETURN OF DECKER-V’GER

Given that “Star Trek” offerings since the last Next Generation film in 2002 (Nemesis) have pretty much sucked (that’d be “Discovery” and “Picard”), here’s a terrific opportunity to make everything right again. In 1979’s Star Trek: TMP, the newly refurbished Enterprise warps off to stop a massive energy cloud on its way to Earth. It turns out the brains behind the cloud is the 300-year-old Voyager 6 spacecraft, aka “V’Ger,” which got sucked into black hole and emerged on the far side of the Milky Way. While out there, it encountered a mechanistic race which set it back on a course to its home planet, and to fulfill its mission along the way: “Learn all that is knowable.”

The film’s conclusion features First Officer Will Decker joining with V’Ger via his love Lt. Ilia. The question remains: What happened to them? Where did they/it go? Now, it’s basically a deus ex machina, but to save the Star Trek franchise from the I-don’t-give-a-f***-about-continuity-or-common sense creators (I mean, seriously — 900 years into the Federation’s future and everyone is still using warp drive?), the Decker-V’Ger being can come back to its old stomping grounds to see how things are going. After going “What the f*** ???” Decker-V’Ger can begin cleaning up the wreck that Bryan Fuller, Alex Kurtzman, Akiva Goldsman, Michael Chabon and Kirsten Beyer set in motion with their, er, “contributions” to the Trek ethos.

Why a Sequel Would Rock: It would allow the Trek franchise to get back to what it should be — that is, no SJW bullshit and a hearty respect for continuity once again. If Kurtzman, et. al. wanna keep that garbage going, there’s the whole Kelvin timeline out there to mess with.

Speaking of Star Trek: The Next Generation, possibly the biggest unresolved cliffhanger in the series, the second-to-last episode of the first season featured Puppet Masters-style alien “parasites” (below) which had taken over key members of Starfleet and the Federation. An old colleague of Jean-Luc Picard contacts the Enterprise captain privately and eventually convinces the highly skeptical Frenchman of the threat. Picard reveals the matter to Riker and crew, who head back to Earth against standing orders.

The episode is tied into the earlier “Coming of Age” in which Admiral Quinn and Lt. Commander Remmick — who obviously knew of the parasite conspiracy at the time — come onboard the Enterprise to “feel out” Picard and crew. Unfortunately, once the Enterprise arrives at Earth in “Conspiracy,” Quinn and Remmick have fallen victim to the organisms. Picard beams down to Starfleet HQ alone to ascertain the situation, while Quinn boards the 1701-D to infect Riker with a parasite.

Riker and Picard, however, turn the tables on the invaders and eventually stumble upon the parasites’ “mother creature” who has taken up shop inside Remmick. Once Remmick is phasered to death, all the remaining parasites perish and the conspiracy appears to be thwarted. Or … does it? At episode’s conclusion, Data reports to Picard that before being incinerated, Remmick sent out a homing beacon to, apparently, the parasites’ home planet (in a previously unexplored part of the galaxy).

Why a Sequel Would Rock: Unlike just about every other TNG thread, this particular one was never touched on again, even in subsequent series. I think I read that a Trek novel brought the parasites up — something about them being an offshoot of the Trill — but that’s it. Just think: If the first season of “Picard” had used the parasites instead the thoroughly worn-out theme of artificial intelligence getting out of control, it would have been a hell of a lot more interesting and intriguing. If the show’s dopey creators were smart, they’d do just that. But they’re not, so they won’t.

Well, this is my list of sequels I’m demanding Hollywood make. What are some you’d like to see? Sound off in the comments below.