Feminists Are Very Upset Over Disney’s ‘The Mandalorian’

Long-time readers of this blog will remember the early days when feminist article after feminist article attacked critics of Disney era Star Wars, calling them sexists, misogynists, and of course manbabies.  Some of them then sought to spit in the eye of those critics by showing off their Fanboy Tears mug.  It now appears that the shoe may be on the other foot.

Liz recently published an article at Medium in which she complains bitterly about The Mandalorian.

So much for gender equality.  Because apparently there’s something super duper special about being a woman who loves Star Wars.  Or something.

Like so many, you came to Star Wars as a child, and it still makes you feel that way, every time you hear the music or see a X-wing fighter.

However, one thing you have been keenly aware of, from your earliest days on this planet, is that it does not contain all that many girls.

That’s because the title of the franchise is Star Wars.  Not Star Girl Power, or Star Female Empowerment, or Star Gender Equality, or Star Feminist Idiocy.  It’s about wars being fought in the stars.  And who is it that fights wars?  Predominately men.  And until wahmen start signing up for selective service, that inequity will likely remain.

So you sit down to watch The Mandalorian this week, and you want to love it for so many reasons…

You know all this, because you think about Tweeting something, and then you think about what kind of response you’ll get, reasonable or otherwise… and so you don’t. It’s exhausting, after all.

Why aren’t you watching Batwoman?  It has what you want.  But they’re going to cancel it because of disastrously low ratings.  So you get what you’re complaining about not getting, but then you don’t bother to watch it when you do get it?  Hmmmmm…   Maybe it’s you who are in the “Tiny Vocal Minority” after all.

It never ceases to amaze me how many middle-aged women suddenly became fans of Star Wars since “childhood,” despite the fact that for decades Star Wars was considered mostly girl kryptonite.  Where in the hell were all of you back then?  Because I didn’t see the bulk of you show up until cosplay became trendy, and geek culture, unfortunately, went mainstream. 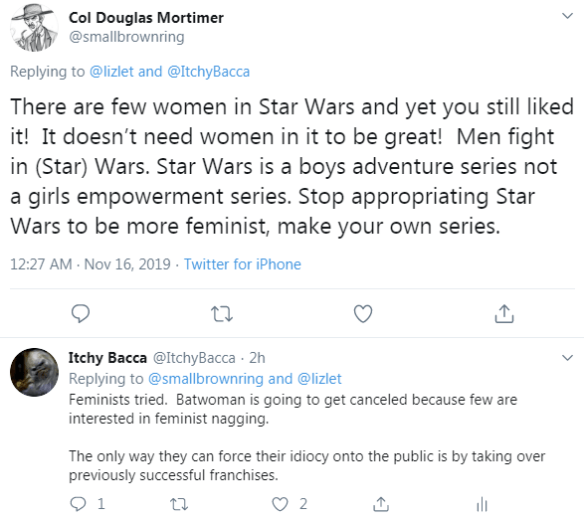 Liz lacks self-awareness as she amusingly complains about the response to the crappy opinions that she shoved out into the internet. 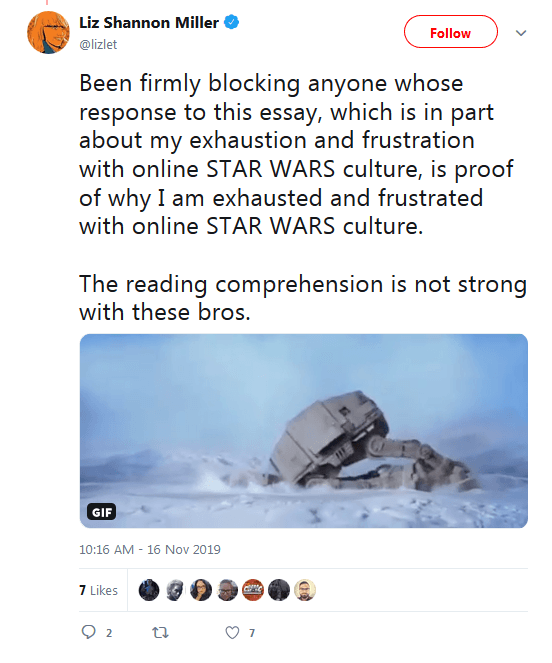 Got that?  It’s oh so exhausting when people respond to her publicly published comments.  Reading comprehension indeed.  Ha!