The LA-ist website covered the story of a fantasy comic by Marc Bernardin, a writer who’d worked on podcasts with Kevin Smith, telling the adventures of an autistic girl in a fantasy world, inspired by his daughter’s experiences:

The Los Angeles writer’s graphic novel, Adora And The Distance, explores a delicately illustrated high-fantasy world. Underneath the veneer, it’s about something deeply personal to Bernardin: what the world of a person with autism can be like — in his case, his daughter Sophie’s. The book was timed for a physical release ahead of World Autism Awareness Day this past weekend.

Centering His Daughter’s Experience, Not His Own

While working as a journalist in the early 2000s, friends and colleagues suggested that Bernardin should write about the story of his life with his daughter as a way to break into publishing. “‘Is there a memoir in this for you? This could be your thing that gets you on Oprah!’ But I didn’t see what my story was that in any way felt special,” Bernardin said.

“In lots of ways, it is the story of every parent who is dealing with a child who is somewhat atypical, be that via disease, be that via genetic abnormalities, be that via something like autism — that story, I understand what that is.”

Instead, Bernardin was interested in a version of the story that wasn’t about him, but could take readers into his daughter’s world. He’s a self-described nerd who loves quest narratives, and he thought about putting an autistic girl at the center of one — creating a story that was less about him and more about what he imagined was happening inside his daughter’s mind “with no actual insight into what my daughter was thinking at the time — and honestly, what she’s thinking today,” Bernardin said.

That’s because his daughter is verbal, but with an internal emotional world that remains closed off. So while he can’t visit that world himself, he wanted to create something that was emotionally true to his own hopes and dreams for her.

Well I wish him good luck in marketing this, though I wish the guy didn’t associate with vastly overrated scribes and filmmakers like Smith, considering the otherwise poor influence he had on pop culture in the past 3 decades, and recalling what a castastrophe his Black Cat miniseries was (which he held off on fully completing for at least a year and a half in the early 2000s). The premise of Adora & the Distance sounds pretty good in itself, and the subject matter is challenging, so it remains to be seen how well it’ll be accepted in an era where psychology’s being turned into a joke by PC advocates.

Check out Adora and the Distance here. 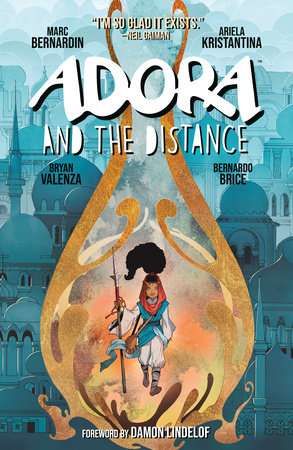