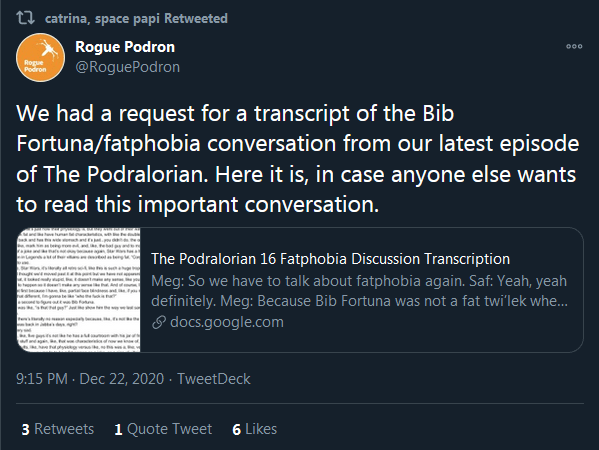 The 2 page document has uproarious comments such as:

Because Bib Fortuna was not a fat twi’lek when we last saw him, but now that he’s this crime lord, so more of a villain less of a servant, and you know, sitting on the throne, he has become corpulent. And there is no, absolutely no reason, why that had to happen except to, like, throwback to being like “well remember how Jabba was fat? And this is what, you know, people do when they have power, they just get fat and evil.”

…but they went out of their way to make Bib Fortuna, like, look fat and like have human fat characteristics, with like the double chin and just like how he sits back and has this wide stomach and it’s just…you didn’t do, the only reason to do that was to, like, mark him as being more evil, and, like, the bad guy and to make people feel like he’s more of a joke and like that’s not okay because again, Star Wars has a history of this where, like, even in Legends a lot of their villains are described as being fat. “Corpulent” is the word they love to use.

It’s not, like, Star Wars, it’s literally all retro sci-fi, like this is such a huge trope in it and it’s really bad and I thought we’d moved past it at this point but we have not apparently. And, like, not only all of that, it looked really stupid, like, it doesn’t make any sense, like you said there’s no reason for it to happen so it doesn’t make any sense like that.

But, yeah, and so I’m really disappointed in that, I’m glad he’s dead, but I’m just really disappointed that they did that because, again, there was really no reason to and it just hurts fans who are watching it who are fat and continue to see that their body type can only be that of, like, a villain, of a joke and things like that and it’s just, it’s not okay, Star Wars.