Some of the usual crowd of moonbats in comicdom have escalated their anti-conservative rhetoric lately, and it gets more and more chilling when you think about it. For example, Kieran Shiach, a CBR/Polygon contributor who has been part of the leftist bunch antagonizing Ethan Van Sciver online. Shiach said in his latest insanity:

establishment politicians: harassing conservatives is only going to bolster their base

me: i am a single issue voter and that issue is guillotines

It just keeps getting more and more horrific by the minute, doesn’t it? After discovering this latest repellent comment from Shiach, I must conclude his supposed disapproval of Identity Crisis falls flat because he’s talking out of both sides of his mouth. In fact, “woke” is probably not the best description of his mindset either, maybe “virtue-signaling” sums him up better, because as his comment on Twitter confirms, he has no morale, and again, let’s note he didn’t focus clearly on the more challenging issues surrounding the disgusting 2004 miniseries.

This is absolutely disgusting and abhorrent behavior and should never be tolerated. Shiach is advocating for the deaths of millions of people because they hold conservative views, but has the gall to label Ethan Van Sciver a Nazi and Diversity & Comics a racist, sexist, bigot. It’s truly revolting. I’m almost at a loss of words.

Shiach’s escalation in rhetoric needs to be universally condemned by the comic book industry. This kind of rhetoric and talk should not be tolerated and it must be exposed to show the truly vile intentions people like Shiach and IDW’s Justin Eisinger have for people who disagree with them politically.

This is just why the CBR website should be boycotted, and nobody should read Shiach’s work, because he’s giving commentators a bad name, and the site’s editors clearly aren’t reining in their contributors. Comments like Shiach’s are practically why most commentators/reviewers shouldn’t even be active on Twitter if that’s how they’re going to behave.

Next, lo and behold, Ron Marz is teetering on the brink with this lunacy:

Civility is earned. If you are complicit with an administration that lies, cheats, self-deals, discriminates, and in all respects burns down what have always been American ideals, expect no civility. Expect no peace. https://t.co/BF5oATdYGy via @usatoday

Sigh…he takes another step into the abyss, dismissing irrational behavior selectively over his dopey politics. Needless to say…how sexist of him. And no appreciation of the fact Mrs. Sanders asked not to hold a grudge against the restaurant. (Nor any concern over the owner possibly continuing to heckle them later.) I think there’s a legitimate case for asking Aspen Comics to discipline him because his comments do risk embarrassing them. To think, that this man is currently writing Fathom, their flagship title, last time I looked! Sigh. (update – Marz is currently the Editor-in-Chief and head writer for Ominous Press, and is also the newest writer on Fathom from Aspen Comics.)

And then, in a third example, we have Tim Doyle, the serial harassing artistgoing about virtue signaling with inciteful language about Trump supporters:

Man, this jerk is a total embarrassment, and if printing artwork is his profession, he should never be associated with by any sane artist or publisher, because his comments are reason enough to avoid his business like the plague.

Next, there’s the would-be “video game developer” Zoë Quinn, who was hired to write some junk for DC’s all but collapsed Vertigo line, and her comments attack republicans over the handling of illegal immigration:

criminally prosecuting border crossings is not just evil it's also a gigantic waste of taxes just in case you were wondering if the GOP was evil or stupid (hint: it's both)

not to mention the whole "people come here and abuse our social safety net" thing is pure fiction to begin with! all of this shit is just racist xenophobic america doing the same shit it's been doing ever since we built a goddamned country on genocide and slavery.

So does this explain why DC Comics was so eager to hire people like her to write a project for them? It goes without saying she violated the guidelines DC produced a few months ago, which by now are beginning to look like baloney for the sake of winning the confidence of anybody disillusioned with Marvel.

To the above comments from Quinn, BIC said:

I would say Quinn’s comments are definitely hateful, cruel, rude, crass, insulting, and mean spirited. I wonder why DC Comics even issued social media guidelines if they aren’t going to enforce them.

Given we’ve seen three Vertigo Comics creators act this way without any repercussions, maybe it’s an actual strategy that DC Comics is employing to boost sales for their upcoming Vertigo Comics line.

Translation: they hope to draw in a ton of leftists and make big bucks off of them with stories that otherwise aren’t worth the paper they were printed on, even though there’s quite a few leftists who don’t buy and read comics regardless. Thinking about this now, the people they’ve hired are just so colorless, lacking class, and uninspiring, it’s no wonder their steps are bound to flounder in the long run, and if this is what the Vertigo line’s going to be like, maybe it’s about time it be retired altogether.

This is why the comics medium is sinking. If the publishers actually care, they should tell these writers to not use Twitter at all, because as Rush Limbaugh once said, it’s just a “cacophony of crap”, and they’re only adding to that whole perception. Sometimes, I think Twitter may really have brought out the worst in some creators.

Here is the e-mail sent out earlier this year about social media postings by freelancers. 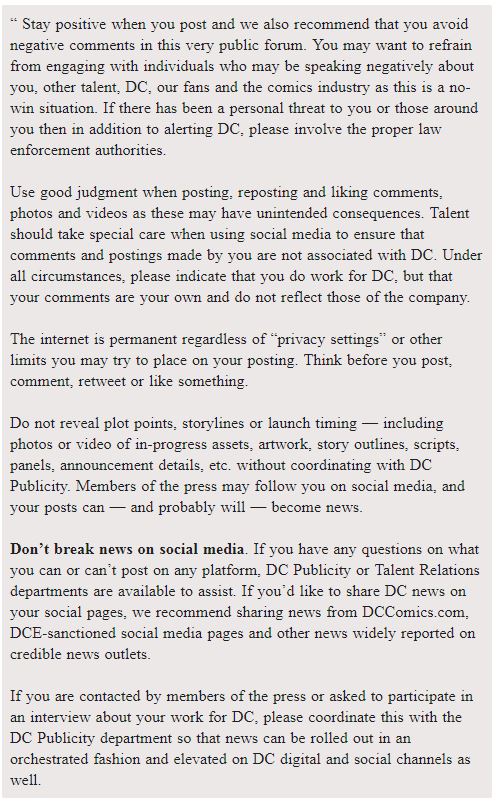