For a while now, I’ve been shedding light on how most cultural and economic institutions, including Big Tech, subscribe to a cult mentality.

If the allegations made in a recent lawsuit are to be believed, Google in particular is being taken over by an actual cult.

A pretentious and problematic New Age society has reportedly set up shop within multiple levels of the Google Developer Studio (GDS), and they very much intend to remain there — at least, that’s what a new lawsuit filed on behalf of a former employee alleges, according to a recent deep dive from The New York Times.

The Fellowship of Friends, formed in 1970 by a former San Francisco Bay Area schoolteacher named Robert Earl Burton, is purportedly “available to anyone interested in pursuing the spiritual work of awakening,” and claims that a higher consciousness can be attained by surrounding oneself with “fine arts and culture,” like operas, ballets, antiques, paintings, and wine.

But at least 12 of them have worked, or are currently working, with the Google silo dedicated to producing video content showcasing the company’s various technologies, while many other associates have been employed in various third-party capacities for events, catering, and even massages. Kevin Lloyd, previously a video producer at GDS, claims he was fired last year for voicing concerns about the Fellowship’s influence and role in the department.

A defining feature of a cult is dividing people into insiders versus outsiders and then working to ostracize those who are on the outs. If Lloyd really was fired over a disagreement with the Fellowship, it lends credence to claims of their cult status.

That’s why Lloyd is bringing a legal case against Google.

He’s using a lawyer who won $6.5 million for a client who claimed she hadn’t been promoted because she wasn’t a member of the Fellowship of Friends.

It’s unclear how many Google employees are actually members of the Fellowship.

So how did the cult gain a foothold at Google in the first place?

According to Lloyd and his lawsuit, both the Fellowship and a contractor provider for Google named Advanced Systems Group have consistently relied on poorly regulated hiring laws to bring Friends aboard in various capacities in and around the company.

It’s so pervasive that Google Developer Studio’s boss, Peter Lubbers, is a documented, longtime member of the Fellowship — implying he makes well into the five, or even six, figures. Fellowship members frequently donate 10 percent of their income to the organization, by the way.

These are the same nepotistic hiring practices that Silicon Valley has used for years to replace American workers with subcontinental indentured servants. So it’s amusing to see a hippie style crystals and incense cult exploit the same loopholes. But who are these guys, anyway?

The group is also known as Living Presence and the Fourth Way School.

It has faced multiple damning accusations in the past and the new lawsuit accuses it of having a history of sex trafficking.

The Fellowship was founded by Robert Earl Burton in 1970.

He predicted that civilization is doomed and his group aims to form a new civilization after the one we know now is over.

Looks like they’re not a death cult per se – more a New Age grift in the vein of Carlos Castaneda.

Burton is also regarded by followers as a prophet. When he forecast a worldwide recession in 1984, believers urgently stockpiled provisions and weapons. He has predicted that a 1998 earthquake will consume the West Coast but spare Apollo. As for the 2006 apocalypse, Burton says Apollo is an “eternal city” that will preserve culture for the ages.

Note that this group still has over 1500 members despite its leader’s dismal track record as a prophet.

People talk about the decline in sexual morality and the erosion of freedom, but an overlooked consequence of sidelining the Bible from the public square is this proliferation of false prophets. They’d think twice if the biblical punishment for false prophecy was still in force. 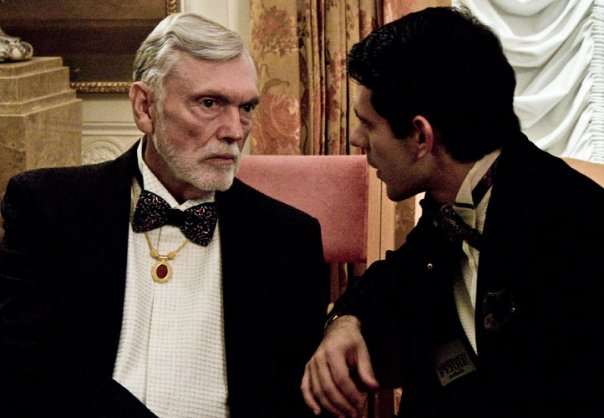 But speaking of sexual immorality …

Many ex-members said they were not spurred to leave until allegations emerged about Burton’s sexual behavior. For years, they said, the teacher’s alleged conduct was unknown because of strict rules against gossiping or speaking ill of him. Moreover, they said, Burton claimed to be celibate, saving his sexual energy for the good of his flock.

Word of the leader’s alleged habits first slipped out in 1984, when Samuel Sanders–a former member of the fellowship board of directors–sued the group, claiming fraud and alleging that Burton used his “god-figure role” to prey sexually upon impressionable young men. The Sanders suit–which was settled in 1988–led an estimated 100 members to quit.

A similar number left in 1995 after ex-member Richard Buzbee wrote an open letter to the fellowship’s followers, claiming that Burton had demanded sex from him and had a sexual relationship with Buzbee’s son, Troy, for many years.

Troy Buzbee, now 27, sued last April, claiming that Burton first seduced him when Buzbee was 17. Declaring himself “an angel in a man’s body,” Burton allegedly told Buzbee that the gods wished for the two to be close.

“Burton would kiss [Troy Buzbee] on the forehead, which he said represented the seat of the soul and then instruct [Buzbee] to ‘separate’ from his body and just ‘let go,’ ” said the suit, which alleged the sexual encounters continued for more than five years and that Burton had sex with other young men. Although Buzbee said he was repulsed and suffered “self-loathing,” his “brain was programmed to believe that there was no place to go,” the lawsuit said.

Multiple failed prophecies didn’t discredit Burton in most of his followers’ eyes. Even serious sex abuse allegations only convinced 100 members to leave. You can’t reason someone out of a cult.

The media are focusing on the Fellowship’s infiltration of Google to distract from the even weirder and more dangerous transhuman bugman cargo cult that already holds sway there. And whose policies let the Fellowship in.

And this is just the stuff we know about. Anything could be going on behind closed doors at Google’s Mountain View technodome.

Regardless, one of the biggest companies on Earth, whose products and services are now essential to the operation of society is in the grip of at least two wacko cults.