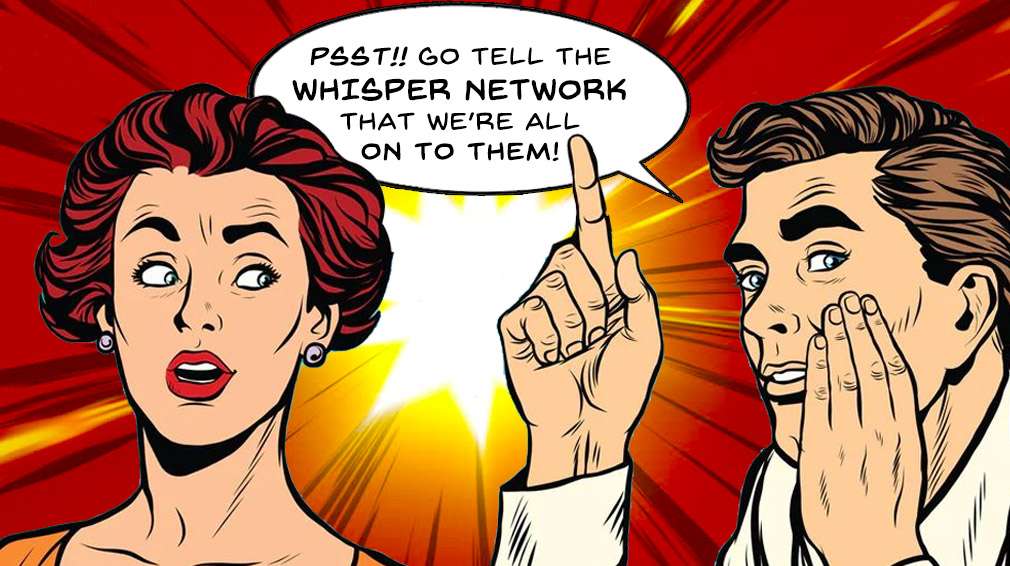 You can read her double-plus-good article here, but be sure to scroll to the end so you can witness that about half of her very own readers are roasting her in the comments section.

This hit-piece was petty, misleading, and cruel – a fact many were quick to point out.

Which is sadly becoming par for the course with MacDonald behind the keyboard.

BUT THE QUESTION WAS, WHY DID SHE DO THIS?

There’ve been some excellent videos about this, and I recommend folks check out ‘That Star Wars Girl’ Anna’s breakdown.

CONTROVERSY CREATED TO KILL HYPE FOR FABLES RETURN BY A FEMALE "JOURNALIST" THAT DIDN'T READ THEM!

That Star Wars Girl explains how an “award winning journalist” like MacDonald, with decades of comics experience, not only didn’t read FABLES, but she intentionally took Bill Willingham’s comments out of context in what looks like an effort to kill any hype for Willingham’s double good news press out of DC Comics, where the publisher had just announced his Fables / Batman crossover series on their Black Label along with an upcoming second, ongoing comic continuing his Fables series that’s scheduled to come out in 2022.

Conventional wisdom would suggest that Heidi is trying to paint Willingham as a pro-Israel lunatic, and thereby giving herself (and the rest of the corrupt journalists in the Network) the green light to start making personal attacks instead of just objectively covering his work.

While this makes perfect sense, and fits with her M.O, I’m not convinced that’s the real reason that she did it.

As many of my readers already know, Stephanie Cooke is a prominent member of the Whisper Network as well, and she has been credibly accused of embezzling in excess of $10,000, which is a felony in the state of Minnesota, U.S.A. 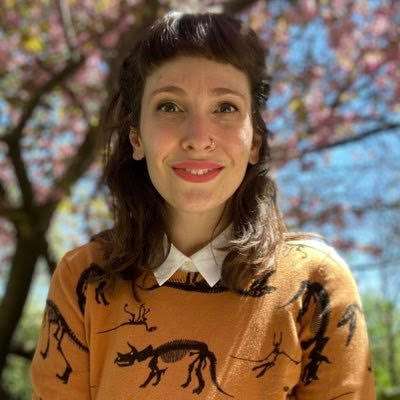 All of the documentation about the crimes she has yet to answer for are publicly available, and numerous sources close to the incident have gone on record about the alleged crime. Cooke fled the US to avoid being arrested and potentially charged, and is now residing in Canada. And the victim that Stephanie Cooke allegedly embezzled from is none other than Fables creator Bill Willingham. 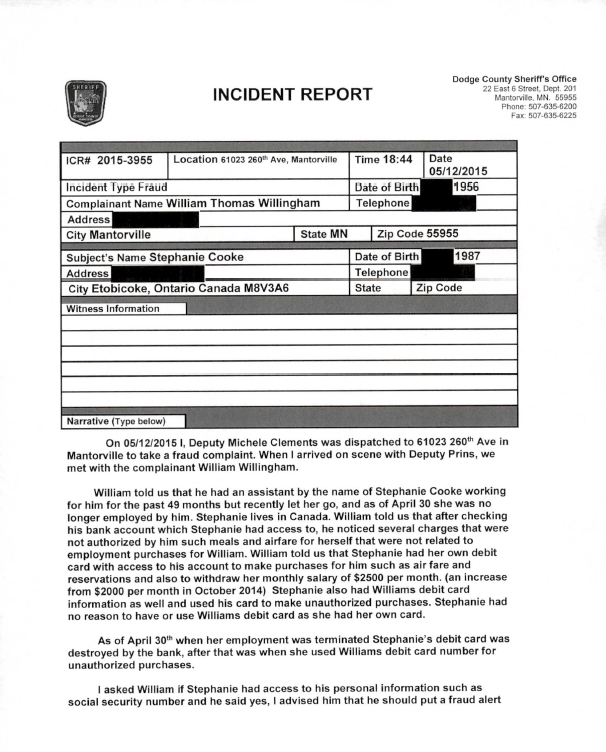 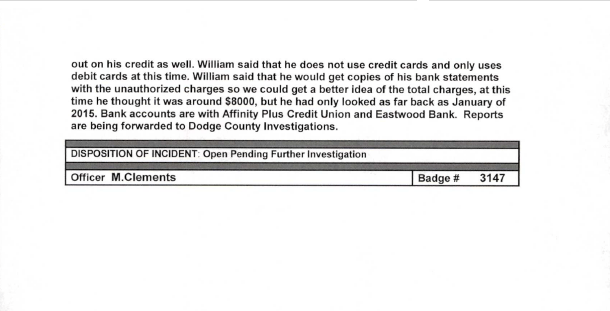 Yes, that’s right. The very same person Heidi MacDonald is now trying to smear as his all-new DC Comics series is being promoted.

SO WHAT’S THE CONNECTION?

Heidi has been featuring her friend Cooke on ComicsBeat for years, and even has a permalink to Cooke’s website as one of their “creator resources“.

In this 2018 interview, Heidi interviewed Cooke, who says (and I can’t make this stuff up) that we need more transparency in the comic book industry.

Of which the comments for this article had one reader inquiring about Cooke’s criminal charges.

Of course, in the spirit of ‘transparency‘, nothing was said by either Cooke or MacDonald, and the comment section on that article was quickly closed.

When the fraud charges were first filed, and Willingham went public with them, Heidi’s Whisper Network counterpart over at Bleeding Cool, Rich Johnston, published, but then strangely deleted a September 19, 2015 article about the embezzlement charges.  This helped sweep the infamous ‘Hello Crookie‘ incident under the rug, and ensure Cooke was able to keep securing work.

Aside from these kinds of cover-ups, how much has Heidi MacDonald helped to Astroturf Stephanie Cooke’s career? In a now-deleted Tweet, Cooke publicly gushed over Heidi ‘keeping her in comics’ with her constant press coverage. 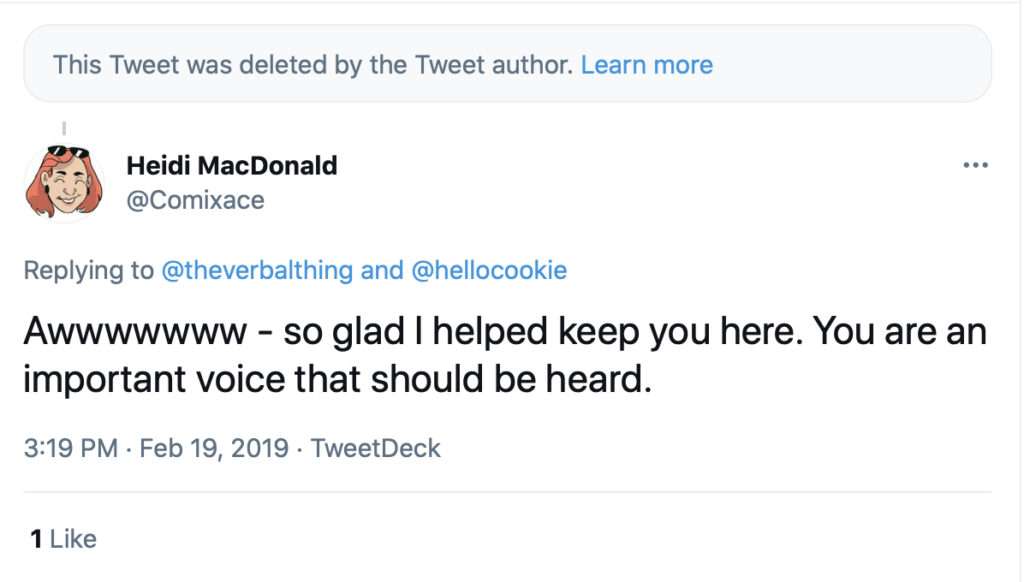 The two are extremely close friends, which is precisely why I find Heidi’s attack on Willingham to be so transparent, and such a disgrace from an ethical standpoint.

FALLOUT: BUT DID HEIDI HELP TRIGGER A CHANGE?

Everything from hit pieces to planting false stories has been common place in the comic book press for years. And there seem to be no consequences for this unethical behavior, which is something Heidi, and many others in the Whisper Network, have obviously exploited. But this situation is changing quicker than they may realize.

In fact, the wheels are already in motion.

I can now CONFIRM that in Quarter 1 of 2021, several comic publishers hired investigators, who are diving deep into media corruption that is damaging their brands, both reputationally and financially. And it looks like we’re already seeing results.

Just last month, DC pulled review copies from a number of websites with a history of corruption, many of whom are part of the Whisper Network. 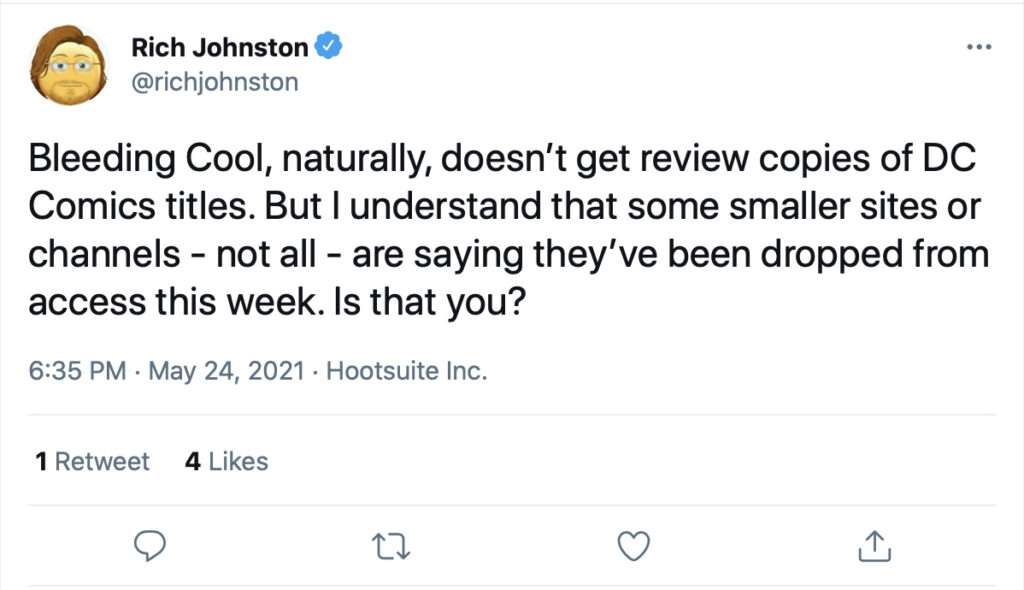 There are also ongoing discussions of pulling press credentials from the Whisper Network’s journalists so they don’t get passes to major conventions like San Diego Comic Con and NYCC.  This is coming at the request of a number of high-level writers and artists, who want to keep their distance from some of the more dangerous members of the Network.

And now, since Heidi’s hit piece dropped, there is suddenly talk of giving interview access and exclusives only to trusted, approved, A-list sources, and barring contact with D and F-list sites that continue to employ “social terrorists“. I’ve been told that many of these investigations are targeting specific members of the Network.

SO WHO IS ON THE WAY OUT?

Some sites like Bleeding Kewl are irredeemable thanks to Rich Johnston’s past and reputation for “social terrorism,” so he was blacklisted long ago. But it looks like even The Hollywood Reporter has started to clean house when it comes to Whisper Network insiders.

Graeme McMillan, a long-time Alex De Campi stooge and ally of MacDonald, was all but shown the door in January. His role at THR is being greatly reduced (for now). 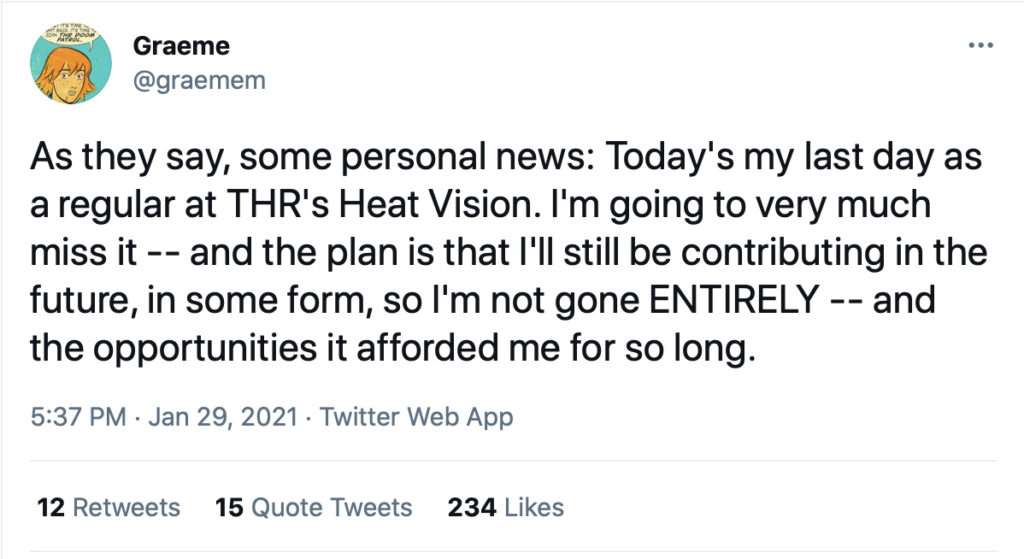 And another Network stooge, The AV Club‘s Caitlin Rosberg, is currently being investigated over some serious accusations she’s been making. My insiders told me they’ve been looking into her ongoing abuse since Q1, and that there could be legal issues for both the AV Club, and Rosberg herself if these investigations uncover what my sources have shared.

In fact, in late May, Rosberg publicly confirmed that my sources were correct. 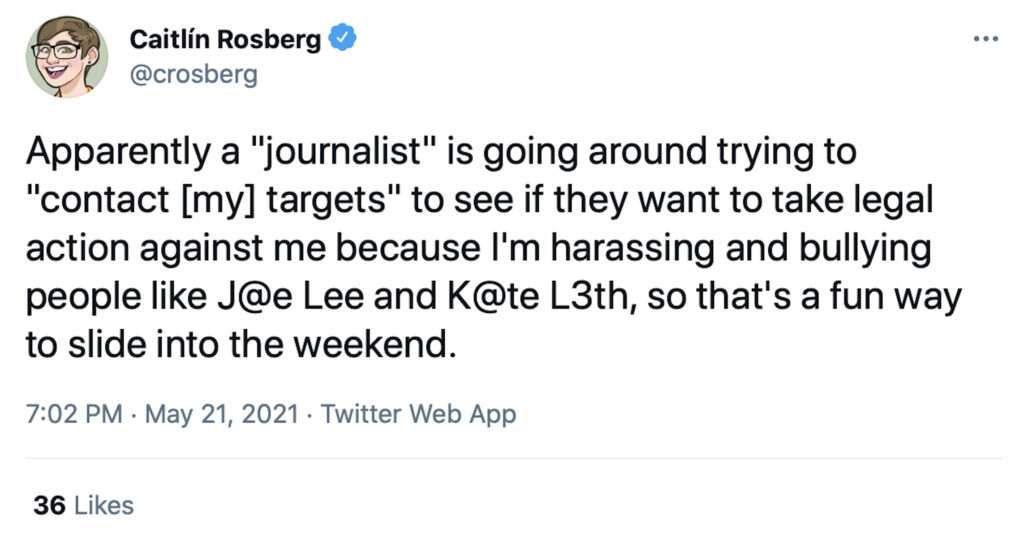 Rosberg’s list of targets in just the last month alone continues to grow as her public meltdown continues. 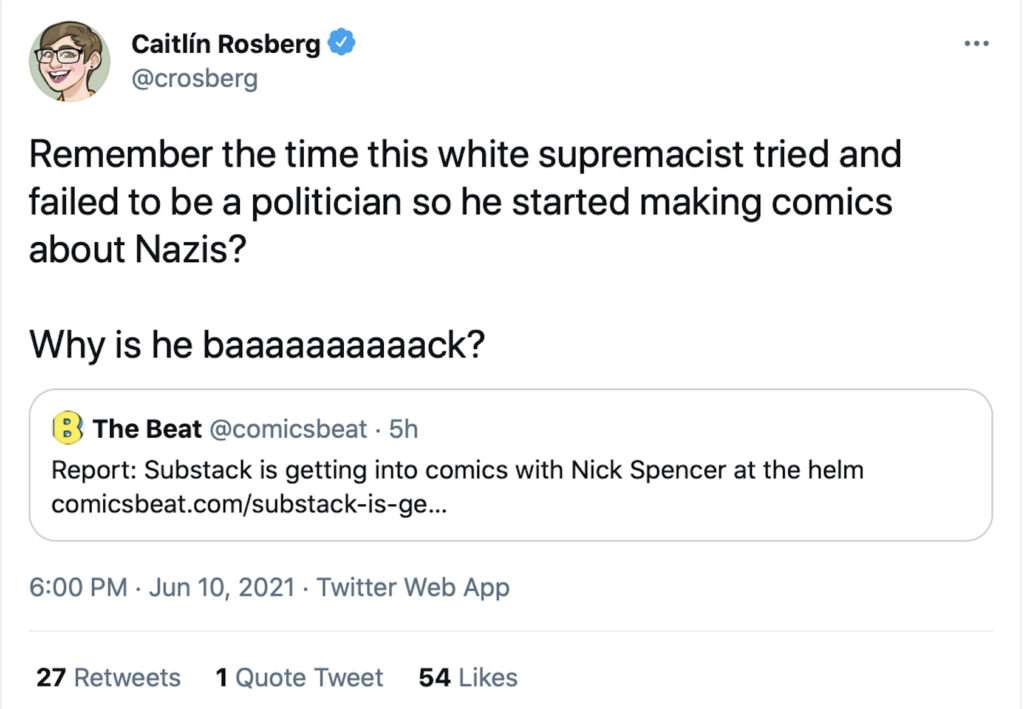 In addition to her bizarre personal attacks against Nick Spencer, her support of the bullying and harassment against Jae Lee, and her disturbing obsession with Kate Leth, she’s also been going after bestselling author John Green.

She then began with some vague, but disturbing allegations against Dan Slott.

These are unbelievably strong accusations against several individuals. And Rosberg’s lawyer (or the AV Club’s legal team, who will no doubt have to intervene in this meltdown at some point) should point out that using Leetspeak is not a magic trick that absolves someone from all legal ramifications.

Perhaps since she is potentially grappling with these legal issues, is the reason that Rosberg’s Twitter account has suddenly been locked at of the time of this writing. 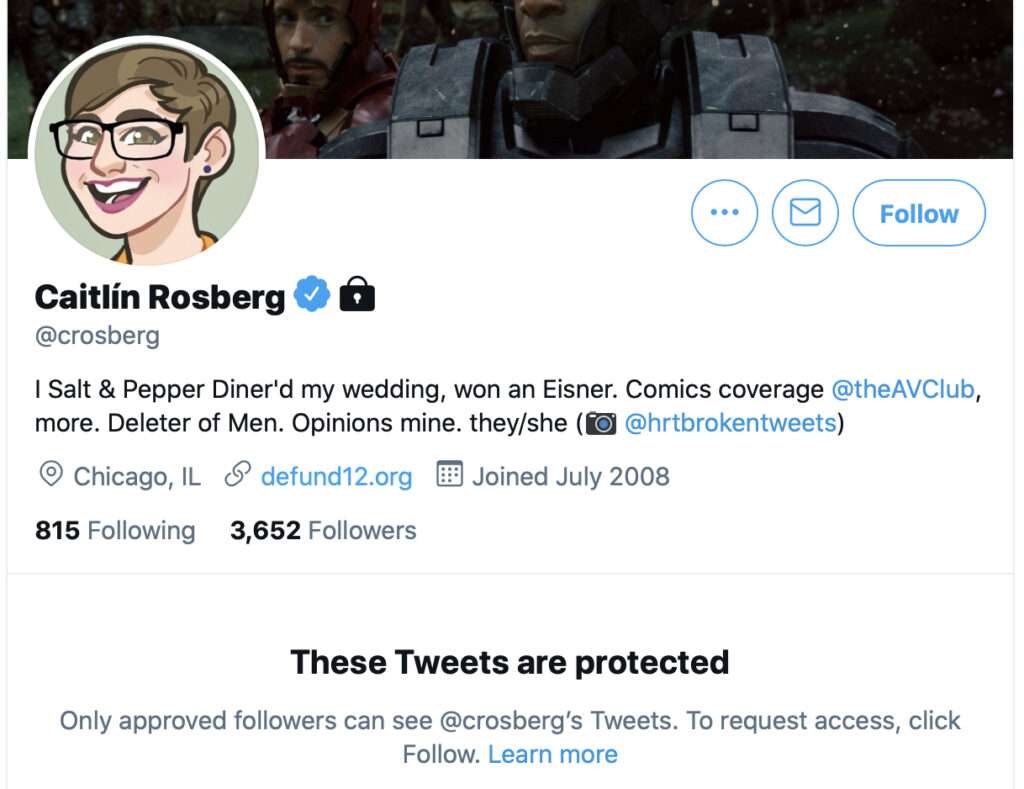 Investigations are continuing, legal consequences are no doubt looming, and more firings/resignations are certainly on the way. The AV Club, Newsarama, CBR, The Hollywood Reporter, and other such outlets are going have to choose between keeping unstable, vindictive, “social terrorists,” and corrupt Whisper Network journalists on board, or simply letting them go so that they can repair their brand’s images, and maintain a good standing within the industry.

This will be an interesting summer to watch and see if there’s an improvement in behavior from the usual suspects, or if they decide to double-down. After seeing publishers pulling review copies, creators and events limiting access to only approved outlets, and multiple internal investigations into damaging accusations, the backlash has officially begun.

And one thing I am now certain of: changes are coming.

Insert pretentious crap about myself here. Nerdfighter. Determined dreamer. Has ambitions to be crazy cat lady if marrying various celebrity crushes proves impossible. And yet after all this time, I’ve finally learned I don’t know anything, but I have also learned that people will pay for what I do know. Life is good.