Do All Those “Evil Superman” Stories Hurt the Character?

Now isn’t this something. Screen Rant’s posted an op-ed in which they admit something’s wrong when there’s too many stories, in a hypothetical vein or otherwise, where superheroes become evil, with Superman being one of the biggest victims:

Stories in which heroes become evil are a tried-and-true trope within the world of comics—none more so than for Superman, perhaps the world’s best example of a pure-hearted hero. It’s easy to see the appeal in reading (and writing) what-if scenarios that put an evil spin on classic characters. In recent years, however, writers have turned Superman into a very specific type of evil: a dictator.

These stories do not simply feature evil Mirror Universe-esque versions of Superman, such as the Crime Syndicate leader and brutish thug Ultraman. These are variants of Superman who were either raised under different circumstances from the “real” Superman or experienced significant (and oftentimes traumatic) events in their lives that caused them to swiftly seize power from their respective governments. Read on to find out how these “Dictator Superman” stories first became popular, why they continue to be written, and why too many of them can potentially do what Lex Luthor never could: destroy Superman. 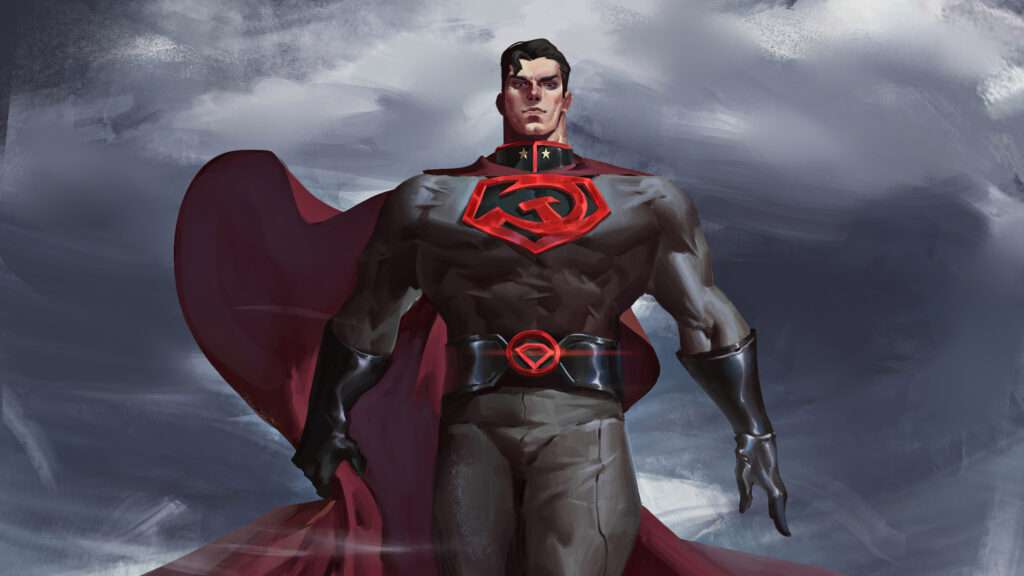 On this, they’re getting somewhere, raising a rarity of rationale for a site that’s otherwise such a disaster in opinion-making. They point to where it might’ve really begun at the turn of the century, which would be Mark Millar’s Red Son miniseries, which some might call the Man of Steel’s variation on Frank Miller’s Dark Knight Returns:

Superman is, quite possibly, the purest example of the superhero: an individual with extraordinary abilities who fights evil, protects the innocent and does it all out of the goodness of their heart. Unfortunately, some believe that last character trait to be Superman’s least believable superpower. “Surely someone who can lift a mountain and have an unerring moral compass without ever losing control can’t possibly be relatable to an audience.” This is the so-called Superman Problem: that the Man of Steel, with all his power and nobility, is not relatable. As other heroes became more cynical and gritty in response to the Vietnam War and the Watergate scandal, Superman did not, and readers considered him out of touch. Then, on September 11th, 2001, everything changed—including Superman

While Superman: Red Son was not written in direct response to 9/11 (writer Mark Millar came up with the idea in the ’90s), the positive critical reception toward this new Superman—a man who uses his great power to enact great change—could not be ignored. In the book, Superman’s rocket lands in the Soviet Union instead of the United States; he is raised believing in Communist ideals and thus devotes all his time and strength to the State. The book details Superman’s reasons for seizing power. Josef Stalin is assassinated and Superman takes his place; the city of Stalingrad is shrunk by an alien and Superman is deeply troubled by his failure to save it; a lower-class orphan calling himself Batman decides to resist the regime and sets a trap for Superman, which fails and results in Batman’s death. Even as his policies become more draconian and free speech becomes a distant memory, the Red Son Superman clearly believes he’s doing the right thing. In that respect, Mark Millar had seemingly solved the Superman Problem; make his reasoning behind his actions fallible. But other writers would learn the wrong lesson from Red Son: bend Superman until he breaks.

And during 2005, one example coming close, if memory serves, was Greg Rucka’s crossover with Wonder Woman – yes, the story that culminated in breaking Max Lord’s neck for shock value, and putting WW in a position where she’d be disgraced. Which is worse? All this followed abruptly-evil Max’s mind control of Supes, and after WW saves him from potentially ending up with a lot of innocent blood on his hands, he condemns her. They’re not entirely accurate, however, to say all heroes became more cynical and gritty at the time of ‘Nam. I don’t think the Flash did, and not the Legion of Super-Heroes either. Even the Fantastic Four didn’t abandon its optimistic approach wholesale. Though of course, perspectives and angles did change in DC stories during the Bronze Age, along with Marvel’s, if they hadn’t yet during the Silver Age. 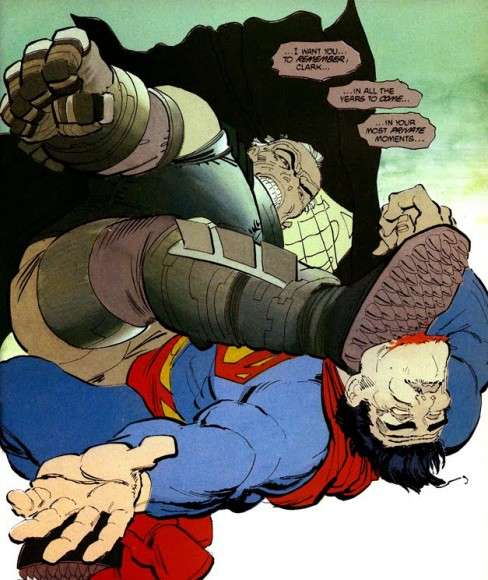 But, a good point can be made that, similar to the reaction surrounding DKR when it was originally published in 1986, the reaction to Red Son was such that for some reason, many politically correct minded editors and writers drew all the wrong messages from it, believing the audience across the board, even if they didn’t want Superman to be spotlighted as literally close to evil, was perfectly willing to sacrifice some of the best ideas that made the Man of Steel work in the first place, including a sense of humor. Something terribly lacking in today’s ultra-modern setting, where everything is taken so “seriously”, and political correctness takes a heavy toll. Some of the results:

A pattern quickly emerged among the new “Superman Dictator” stories that arose in the wake of Red Son: in order to properly motivate Superman, writers would simply kill someone close to him…resulting in Superman returning the favor. In the episode “A Better World” from the Justice League animated series in 2003, the Flash has been killed. Superman, out of grief and anger, murders President Lex Luthor before seizing power himself. Batman eventually moves against Superman which ultimately leads to his downfall. In Injustice: Gods Among Us: Year Zero, a comic series set before the Injustice: Gods Among Us video game, the Joker drugs Superman, tricking him into killing Lois Lane and preventing him from stopping a nuclear bomb from devastating Metropolis. Superman flies into a rage, murders the Joker, and takes control of all governments as he executes more criminals, along with any heroes who object. Once again, Batman fights Superman and leads a resistance movement against his regime.

This pattern even extends to feature films—almost. Director Zack Snyder’s plans for the cancelled Justice League sequels included Lois Lane’s murder at the hands of Darkseid. A grief-stricken Superman would have been Darkseid’s herald, murdering Wonder Woman and potentially Aquaman, before eventually murdering Darkseid himself and taking over the Earth. Once again, Batman would have been Superman’s main opposition, working on a method to undo the devastation under his reign. Now the pattern, first appearing in Superman: Red Son, becomes abundantly clear:

2. Superman murders in response to that loss

Which, again, demonstrates another potential pattern: the Masked Manhunter takes the role of the guy to root for, and Superman is reduced to a one-dimensional lunatic bully whom the most pretentious, fake fans may hope loses in more ways than one. As the previous material I’d looked over suggests, we’re even supposed to believe Batman is the guy Lois should consider her worthy suitor, not Superman. And all the while, these phony auteurs desecrate the memory of Jerry Siegel and Joe Shuster, who worked hard to put their creations together. And now that I think of it, the worst part is how eerily reminiscent it is of Emerald Twilight, where Hal Jordan goes berserk, murders tons of GL Corps members, and then takes up the Parallax role, in an early precursor to where we’ve arrived today. In some ways, that repellent 1994 tale most certainly was what led to the modern situation wherein Supes has been brutalized by political correctness. 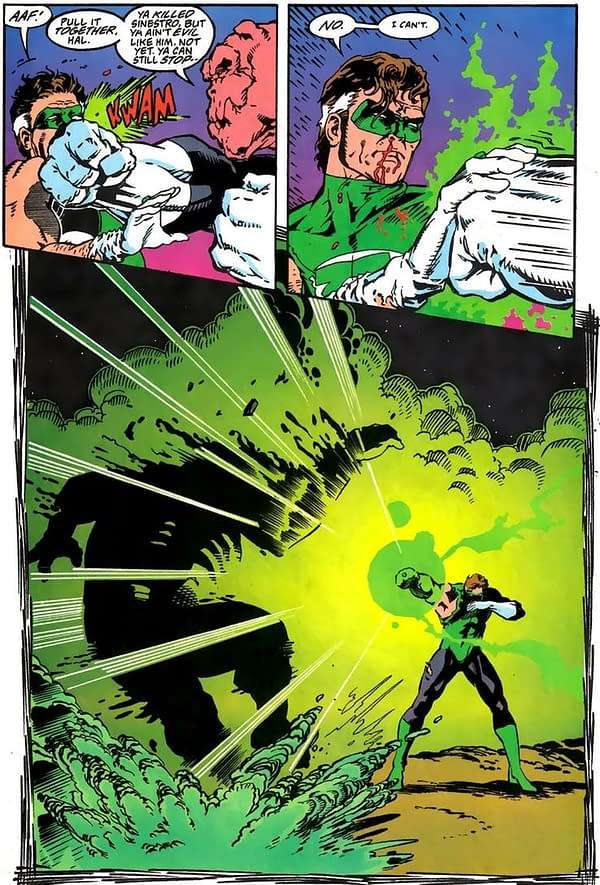 So I guess what’s really happening is: we have a whole generation, quite possibly “millennials”, who, because they can’t find Superman “relatable”, decide they have to all but change him to the unrelatable role of villain, while Batman is selected as the perfect template for what they supposedly do find relatable. Which could explain why Batman’s been through far less notable instances where he could be brainwashed into evil. How people who get these mainstream writing assignment jobs wind up with all the wrong ideas for how to approach entertainment fare is mysterious, but quite possibly the product of today’s educational system in universities, where radical leftism’s created quite a cynical atmosphere filled with alienation rather than joy. And that could explain why they’d be fine with a situation where Lois is killed, rather than focus on a nice night out she and Clark Kent are taking on the town, spending time going to an entertainment venue, making love, and even discussing child-bearing, something which actually has been done now, seeing how a new heir to the Superboy title was introduced some time ago named Jon, after the adoptive dad from Smallville. Yet they ruin even that much as they continued customs that have been in place mainly since the now ousted Dan DiDio was their EIC/publisher.

And what many miss is that DKR and Red Son apparently appealed to certain niche crowds, not those who liked the more traditional way Superman and Batman were usually written in the past, which for the latter, did consist of a more humane portrayal, not the absurdly control-freak characterization that came into being by the turn of the century. Yet I’m sure a lot of those who twisted the World’s Finest duo out of shape weren’t interested so much in improvements so much as they were in making a political statement that, until more recently, wasn’t so obvious, but certainly is now. That’s what happens when people who aren’t suited for the job take it as little more than an undeserved way to earn a quick buck, not because they want to make great art. Otherwise, they would recognize that what matters most is entertainment value. Only by following that formula can you build a story that’ll make people think, and overall be impressed with. All that aside, this obsession with darkening Superman has got to stop.

It’s pretty flattering somebody at Screen Rant was willing to make a decent case against the cynicism that’s ruined the Man of Steel, while elevating Batman at Superman’s expense. But it’s clear it’ll likely be one of very few sensible arguments in a sea of phoniness and political correctness for as long as they’re still around (one of the reasons I still believe in just using archived links to their site whenever possible). If they haven’t taken an objective view of Brian Bendis’ dreadful run on Superman, chances are they won’t in retrospect either. Also, if they haven’t yet, don’t be shocked if tomorrow, they’ll say Lois can’t be a sex symbol, because sex appeal is wrong by Orwellian standards. The kind of propaganda that practically led to Mary Jane Watson getting banished from Spider-Man for nearly a dozen years.