Escaping Pop Culture: You Can’t Save Everyone

Alric Hart pens a scathing rebuke of current pop culture and correctly points out that, as much as you might want to, you can’t save everyone from the Pop Cult.

We are constantly stormed by product of bad quality and malicious intent. Turn on your TV, and wait for something that is relatively interesting, something which picks your genuine attention and not your demand of gossip (that is, no news, no reality TV, etc.). Personally, if I did this, I’d wait for hours, at least until after dinner, to have a chance at finding a good show. And, who’d have guessed, it would generally be old movies.
Try radio and go through hours of useless talking, interrupted by a couple minutes of the same shitty five songs big labels want you to listen. Videogames? Most of the “tripul A” industry costantly releases the same game with different skins. And let’s not touch books, or this rant will be too long; go to a bookstore and see for yourself.
I am aware and sure that these industries are either tanking or stagnating, one more than the other. In truth, what I really want to talk about is the fact that a part of the public has been boiling inside that old pot for so much time that is incredibly hard to pull it out of the hot water. Be it the middle-aged lady watching soap-operas all day, or the comic book nerds that just can’t stop simping for Marvel and DC, these guys will continue drowning in the quicksand that is the current entertainment industry.

Sad to say, a not inconsiderable slice of the population, mostly hailing from Generation Y, willingly chooses to stay in the Cult.

They really have enshrined Brand X at the center of their lives, where God should be. This decision was not made rationally, and there’s no reasoning them out of it.

There’s a darker side to so many people betting all their chips on progressively rising material prosperity. As the standard of living in the West declines to third world levels, and the flow of bread and circuses dries up, ever more lost souls will seek death to relieve what they see as meaningless pain.

But Christians know that temporal suffering is a chance to cultivate virtue and an invitation to unite our sorrow with Christ’s saving Passion.

Now that the political window for reversing the decline has closed, our top priorities as Christians should be growing in holiness–which should always be job one–and bringing as many others into the fold as God permits.

And now, more than ever, it’s crucial to not give money to people who hate you.

Find out how, read it now. 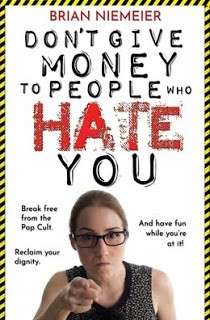