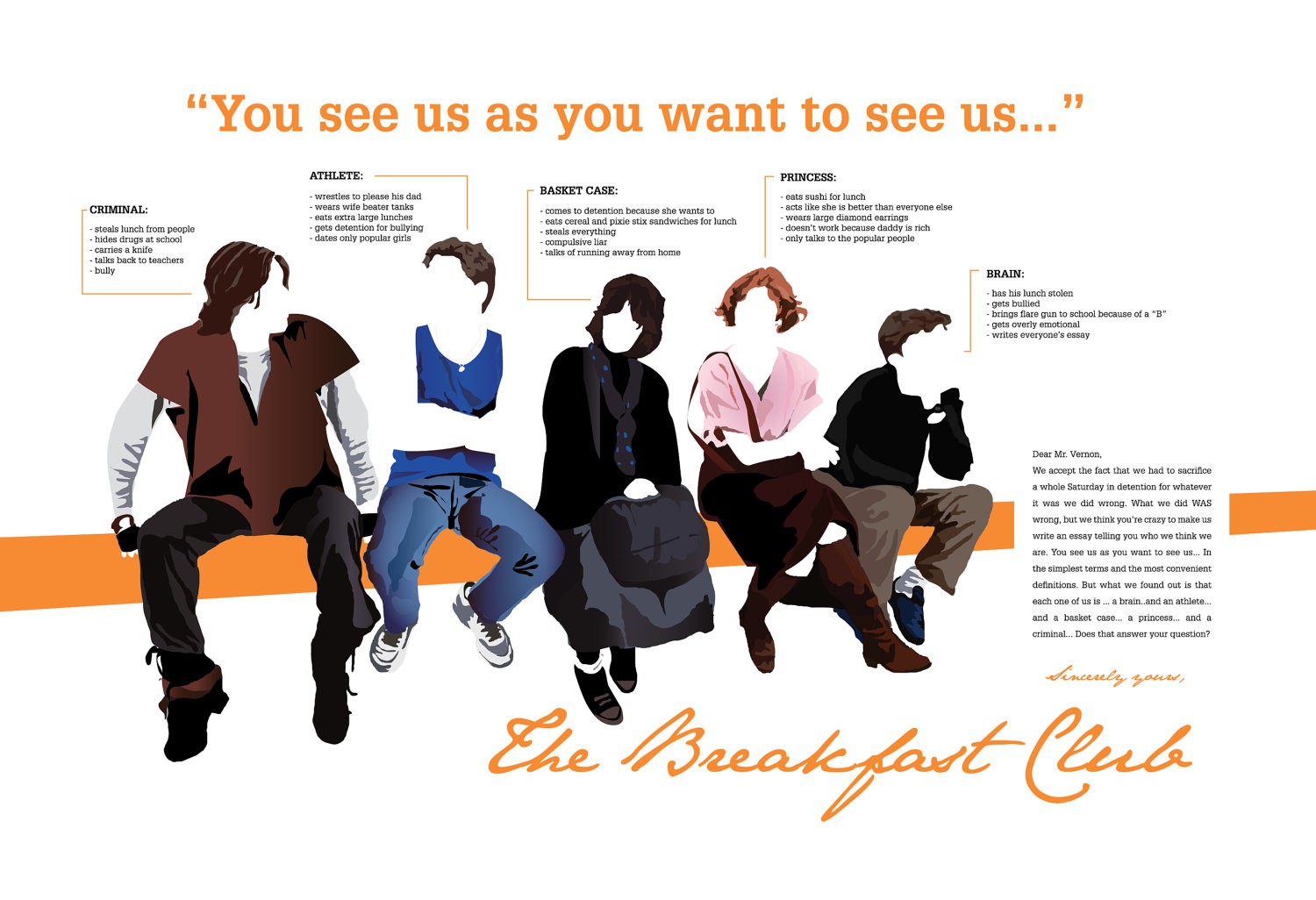 For many people, the Breakfast Club is a nostalgic throwback to their own emotional, angst-ridden high school experiences. Many who saw the film were themselves grappling with their own problems; their social lives, facial complexions, and parents who just don’t understand. They were able to connect to the characters and relate to them on a personal level that resonated and somehow seemed to be able to express the existential struggle of being a teenager in Reagan’s whitewashed capitalist America.

The story follows the interactions of five high school students that have been punished (for various reasons revealed later in the film) with all-day Saturday detention in their school library. Their personalities and backgrounds are dissimilar in many ways, yet, through conversation, empathy, tolerance, and understanding they begin to open their minds and hearts to the experiences of people who are different from them and come to realize that there are common threads that bind us all. The film ends on an optimistic note, with the students departing with a deeper understanding of each other and humanity as Simple Minds’ “Don’t You Forget About Me” plays in the background.

Simple Minds - Don't You (Forget About Me)

The Breakfast Club is ultimately a story about diversity being our greatest strength, and finding that at the core of every human is the desire to fit in and work out our differences. This message of hope could not be needed more than it is today, because in the current year, we live in a volatile country rife with systemic racism, injustice and oppression. The unifying message of the Breakfast Club must be delivered to the next generation of young people. Therefore, it is our moral obligation to revisit this film’s theme, but with an updated look, feel and narrative. 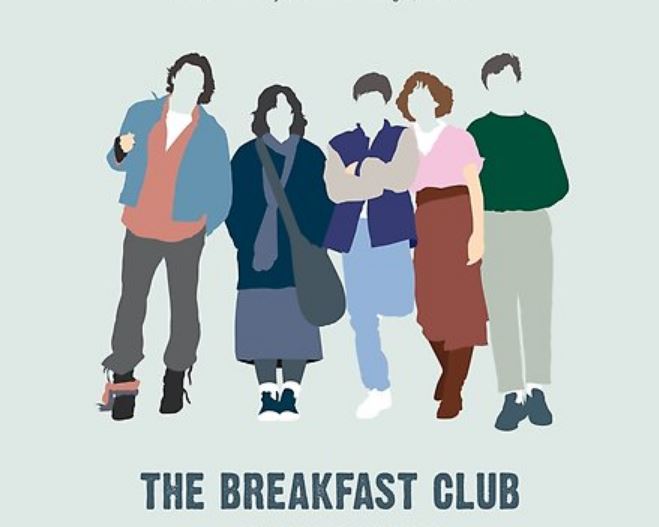 When contemplating a remake of the movie, it’s most glaring flaw must be immediately addressed: the original was painfully white. Judd Nelson had a certain “ethnic” look to him, but for all practical purposes the film was only concerned with representing white cis-gender heterosexuals. It is imperative that this 2020 update reflect the changing demographics of America and be appropriately inclusive, especially when considering casting. Representing intersectionality is paramount in communicating the constant injustices that minorities struggle against.

First off, fan favorite and soulful rebel John Bender (played by Judd Nelson in the original) will need to be recast as a person of color. Instead of being a rough and tumble white trash/trailer park type- character, he will be represented as an outspoken dissident and social justice warrior. In the first movie, part of the character’s back story was that he was abused by his father. In this version, his backstory will be that he was pushed to social action when the police shot and killed his unarmed father during a traffic stop. As to the reason for his presence at detention, I feel it would be best served by having the infraction be related to some form of social activism. Maybe the school doesn’t like that he is trying to get a chapter of Black Lives Matter started at the school. Maybe a racist teacher falsely accused (or framed him) to get him in detention. Another possibility would be that he was kneeling during the national anthem, or something comparatively noble. When I envision his look, it’s kind of like that beautiful milk-chocolate colored man with the strange grey eyes that was discovered when a modeling agent picked his picture out of a group of mugshots. 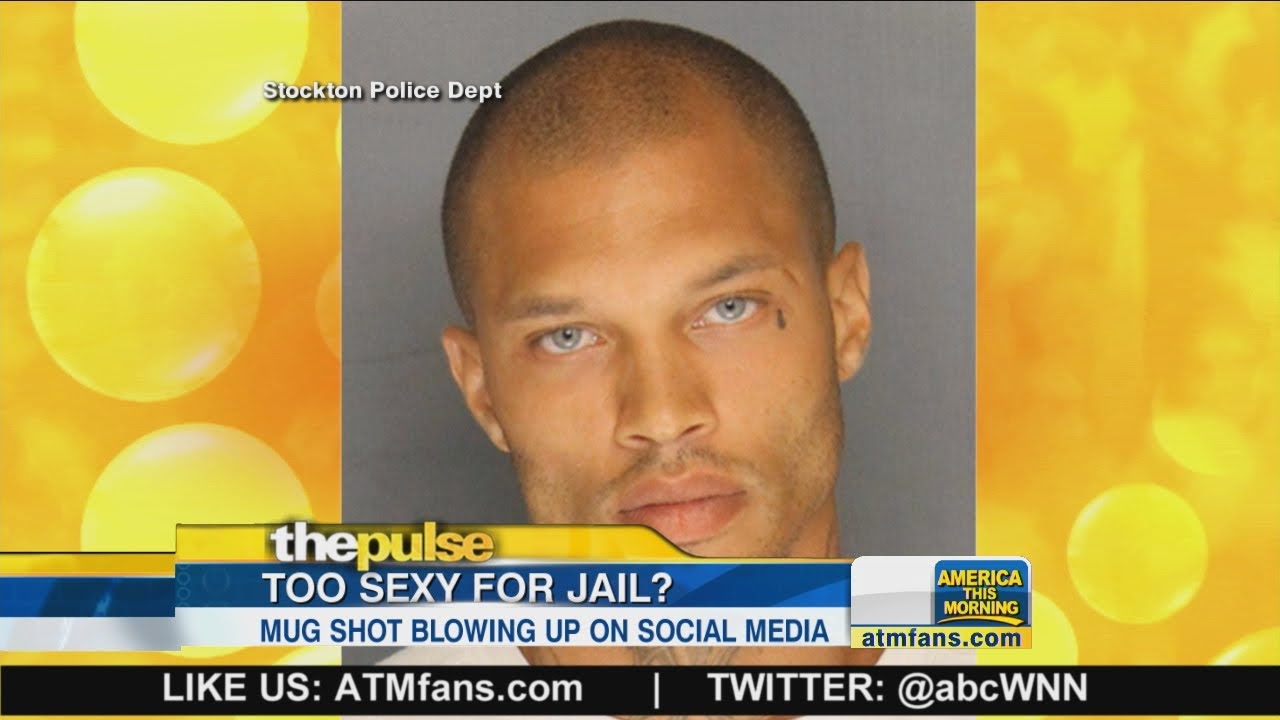 The character of Claire Standish (originally played by Molly Ringwald) will remain essentially the same as the original. She should be portrayed by a well-known Caucasian actress, and will essentially function as the epitome of wealth and white privilege. Through her interactions with the other characters (and especially the new, smoldering, black, John Bender) she will have a revelation of how much misery whites have subjected other minorities to and understand that contrition is necessary to balance the scale. Her awakening will be all together more poignant when she and the new, smoldering, black, John Bender decide to become romantically involved towards the end of the film. It should also be made implicit that her parents would disapprove of her interracially dating to the point of “cutting her off” financially and emotionally. It also might be appropriate to have a scene where “cultural appropriation” is explained. Perhaps when Claire is talking about having a reggae-themed party, or simply wearing hoop earrings, either of which would provide a good opportunity to introduce the subject.

The role of Brian Johnson (originally Anthony Michael Hall) should be recast as a person of Asian-descent. This character’s arc was originally his fear of academic failure and disappointing his parents. After making a failing grade on a shop project, he contemplated suicide via flare gun. The flare gun discharged in his locker, resulting in his detention. We all know that having a flare gun go off in your locker would likely count as a terroristic threat by today’s standards, so there must be an alternate reason for his punishment, which doesn’t necessary have to tie into his intent to commit suicide. Whatever the reason, the important change is his motivation to end his own life: he is now shown to be struggling with his gender/sexual identity. Brian is interested in exploring the idea of dressing and physically representing as a woman. He isn’t sure if it’s something he would want to take to the logical conclusion of surgical transition, but nevertheless wants to be able to explore these feelings. He is tormented by incredible shame and guilt, and fears the dishonor it would bring upon his family if he ever indulged in this exploration openly. He has contemplated taking his own life because he feels that his father would rather him be dead than a transgender. 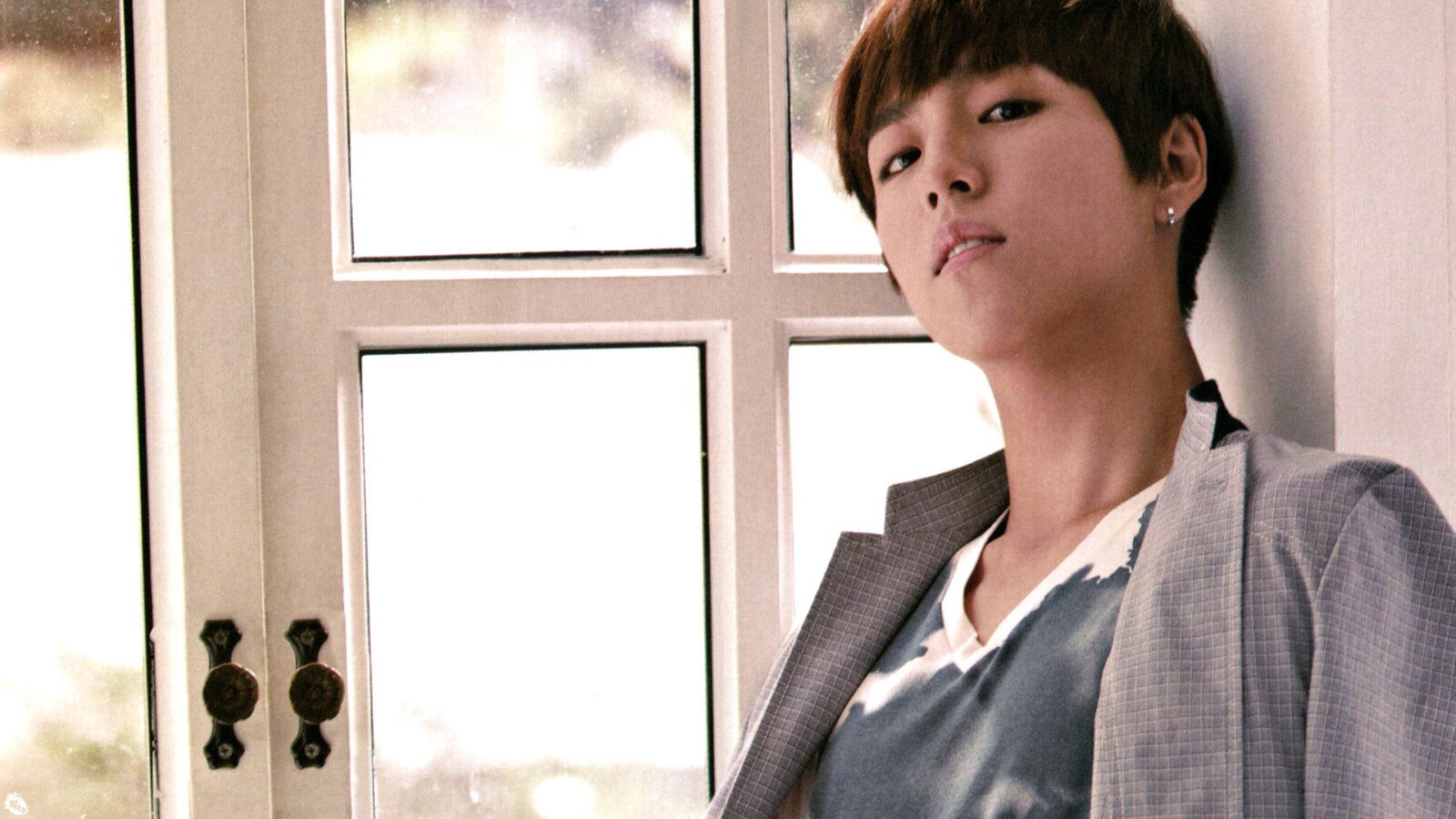 Through his interactions, he is able to understand that his father is wrong to be more concerned with the family’s reputation then with his own son’s happiness and fulfillment. Originally there was a scene of Molly Ringwald’s character putting make up on Alley Sheedy’s character, but in this version Brian will be the recipient of the “make over”. He emerges transformed, a glowing, glamorous woman. (The costumer can decide if something should be added to create the illusion of breasts, or if they should be left flat.) At the end of the day when his parents arrive to pick him up, his mother might touch his father’s arm and say something like “He’s truly beautiful” or “Like the orchid blossoms, we have no control of nature” or something along those lines; something that sounds Asian and profound.

The next character to cast, the wrestler Andrew Clark (Emilio Estevez originally), will unfortunately have to be another white actor, but this is necessary in order to make some important points about modern society. This character will represent rampant toxic masculinity and the prevalent epidemic of rape culture in schools in universities. (Perhaps there might be a back story where this character attempted to date rape the Claire character.) Also it should be made obvious that he and he parents are conservatives via Andrew sporting a MAGA hat (which might provide good friction between him and the new, smoldering, black John Bender character) or perhaps a “Trump 2020” bumper sticker conspicuously visible on his father’s pick-up truck. Andrew’s character arc will stay essentially the same, with one small difference: he is secretly fighting an internal battle against homosexual urges that he cannot act on. His father’s expectation that he be a dominant, alpha male bully feeds his anxiety and turmoil. The actions that lead to his being to detention are a metaphor for his closeted repression; he literally tapes a fellow teammates’ buttocks together in an effort to stave off the thoughts he has been having about being with a man physically. Perhaps he can reveal to the group during a confessional scene that he felt arousal at seeing Larry Lester’s hairy asshole beckoning just a few feet away in the locker room, and acted out of desperation. 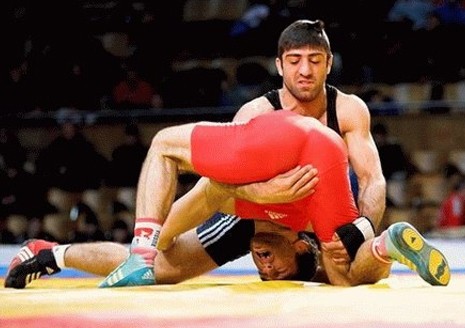 The role of Allison Reynolds (to be listed as Allison/Allen Reynolds in the credits) could be played by either a male or female, as the character is intended to be gender neutral. Whoever is cast, they should have a distinctly androgynous look, and be of mixed ethnicity. (When I close my eyes I see a Parkland school activist Emma Gonzales-type in the role…). In the original, this character was considered the “basket case”, but here he/she/ze/zed will be reimagined as a fearless tester of boundaries and provocateur extraordinaire, kind of a punk rock Antifa-type. Originally this character didn’t have a legitimate infraction of the rules to get detention, but was there by choice (“I didn’t have anything better to do”). In this version I think it would be better to have him/her/it to have painted the word “Resist” in his/her/fe/fi/fo/fum’s period blood across the lockers to protest the lack of gender neutral bathrooms in the school as the cause for his/her/do/re/mi/so/fa/ti/la’s presence in detention. (I think this can also serve to reinforce the idea that males can experience menstruation too.) Allison/Allen’s openness and sexual confidence helps Andrew come to terms with his own sexual confusion, and at the film’s conclusion they are a committed couple. 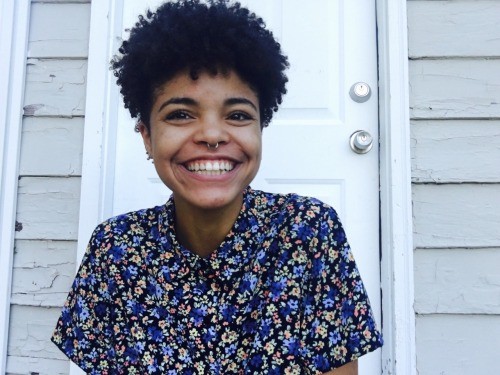 As for the villain of the film Richard Vernon (played in the first movie by character actor Paul Gleason), he remains the same oppressive symbol of the Patriarchy. Some more topical things that could be woven into his personality might be that he’s a climate change denier (maybe there could be a scene where the intellectually superior Brian schools him on the settled science), or maybe he sexually harasses Claire on her way to the bathroom. He might purposefully misuse Allison’s/Allen’s preferred gender pronoun. Perhaps during the intense exchange where he is trying to goad the new, smoldering, black, John Bender into punching him, he calls him a racial epithet. There are so many different ways in which to instruct viewers on what is morally expected of them in the current year, it might be difficult choosing which lessons are most important. 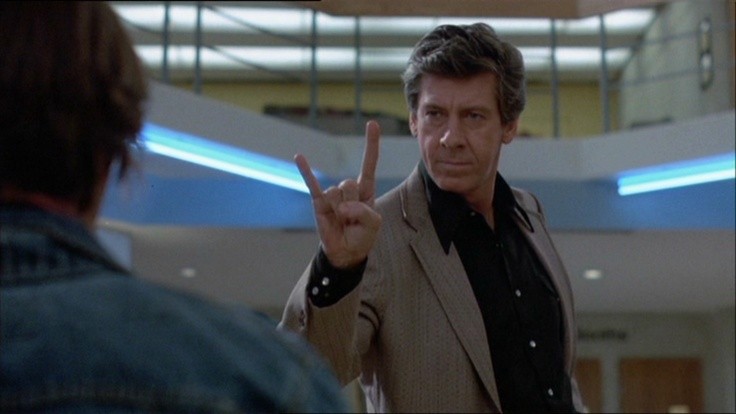 There are a few little tweaks here and there (maybe Carl the Janitor is undocumented immigrant, and the Vernon character threatens to call ICE on him after Carl catches him looking in the basement files) and the closing “essay” will have to be changed (especially the part where it implies that the new, smoldering, black, John Bender character is a “criminal”) to something more contemporary (maybe something like “We found that each of us is a man… a woman….. gay….. straight….. Marxist….. democrat…….. sincerely, the Breakfast Club”), but for the most part the timeless, uplifting message of unity and vibrant cultural exchange will continue to ring out and inspire people for generations to come.

The preceding has been satire, which should have been obvious, but if anyone in Hollywood decides to remake it and use any of the preceding suggestions, we’d better get a check 🙂