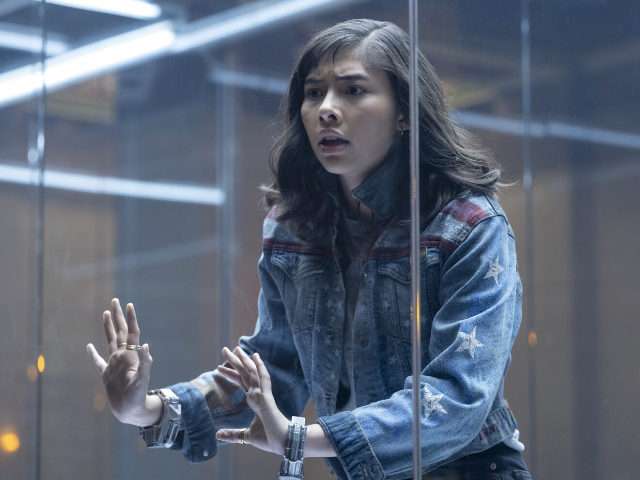 According to a writer at the Federalist, Doctor Strange in the Multiverse of Madness is laced with what the emphasis on what America Chavez was built upon should make clear, and just as disturbingly, horror-genre elements:

Raimi changed all that in the sequel, as Wanda possesses an innocent mom, torturing and murdering people in gruesome ways. “Doctor Strange 2” gives us all the hallmarks of a stereotypical horror flick, but without the suspense that makes them great, and then leaps back into an incoherent fantasy. This witchcraft keeps the plot afloat, distracting from holes in the storyline. If you’re going to take on a multiverse, you shouldn’t use sorcery as a crutch to hide the parts that don’t make sense. […]

In short, the film is a trifecta of graphic, creepy, and cheesy. If Marvel wanted to merge with the horror genre, it should have debuted a new series instead of messing with an old one. The jump is jarring.

On this note, I’ve noticed there seems to be quite a few horror-themed movies turning up lately (including a remake of Stephen King’s Firestarter and Crimes of the Future), and it’s honestly worrisome, because it symbolizes the bad influence all the concentration on darkness has upon entertainment of recent. However, if the 2nd Ghost Rider movie of the past decade was a dud, putting an end to more such adaptations in a hurry, then there’s little point in remaking them now, if a horror film is such a big deal.

Worse yet is the message of the film delivered to us through the hypocritical hands of Strange as he stops at nothing to save the day. Wanda’s insatiable self-deception becomes almost a relief in comparison to the sangfroid of Strange, who breaks no sweat at crossing the very same line that makes Wanda the bad guy.

On its face, the film doesn’t seem that woke, and to its credit, it’s not a feminist propaganda piece. There’s just one brief flashback to Chavez’s lesbian “moms,” but nothing more — we think.

But America Chavez is not a Stan Lee creation. She’s a lesbian character from Joe Casey and Nick Dragotta’s 2011 comic “Vengeance #1.”

And all of a sudden, we realize what door Marvel just opened. The sexuality of Marvel’s newest female superhero now has protection in any future production from one of the biggest of the Marvel franchise: “Doctor Strange.” Any pushback to an overtly lesbian character can now be fought with the assertion that she’s already in “Doctor Strange 2,” and she’s lesbian in the comics.

They didn’t mention, however, that, as previously noted, the 2 lesbian moms were killed off in a cliched showbiz setup wherein lesbians are killed as plot devices, and that can also be tasteless and reprehensible. But, the reviewer has a point that the politicized structure of this film, relying as it does on characters developed for political points, serves to further woke agendas, and if Disney/Marvel Studios use the global box office gross as justification, it’s no wonder we’ll be swamped with more of this agenda-driven use of homosexuality in any upcoming films allegedly based on Marvel products.

That aside, it sure is ironic how, for a movie as woke as Multiverse of Madness actually is, they had no qualms about victimizing Scarlet Witch’s reputation full force, depicting her as a murderous madwoman instead of an admirable heroine fearlessly battling sci-fi criminals in a fictional world. It just shows how even today, many of the writers and editors responsible for bringing down the quality of Marvel’s comics to dismal levels are still getting away with it.

I’m as big a Doctor Strange fan as the next person is – and proudly own a big portion of the stories from up to the turn of the century in trade paperbacks – but that’s exactly why I don’t want to watch movies like these. Because the sad truth is, they do the source material a terrible disservice.