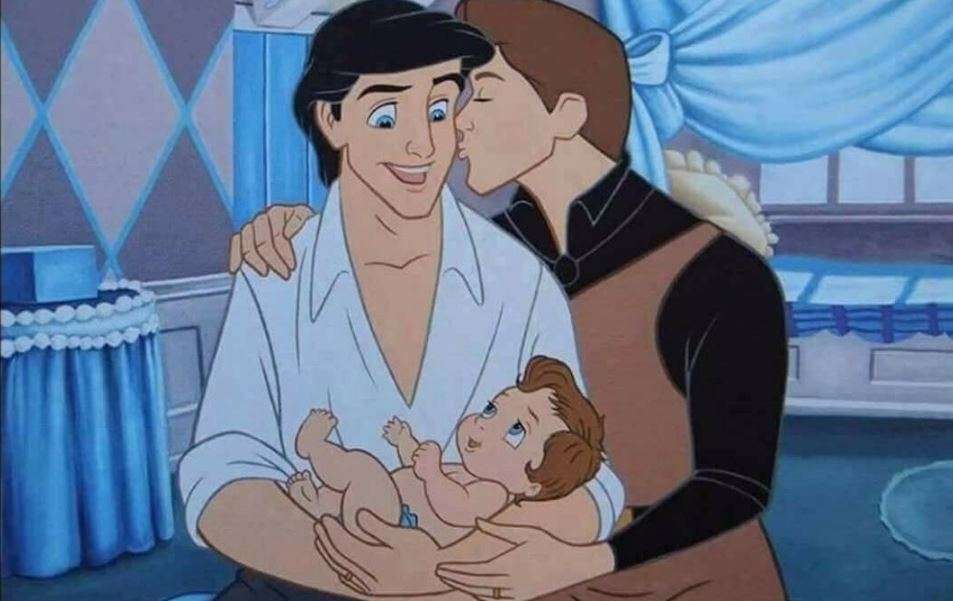 Disney’s animation studios are moving further into LGBT propaganda And what’s telling is that they seem to be doing it all out of spite over a political bill, in political affairs they shouldn’t even be involved in. Case in point, as told in Variety (via Breitbart), is the new Toy Story spinoff, Lightyear. They also made sure to distort what the bill is about:

On March 9, LGBTQ employees and allies at Pixar Animation Studios sent a joint statement to Walt Disney Company leadership claiming that Disney executives had actively censored “overtly gay affection” in its feature films. The stunning allegation — made as part of a larger protest over the company’s lack of public response to Florida’s “Don’t Say Gay” bill — did not include which Pixar films had weathered the censorship, nor which specific creative decisions were cut or altered.

But in at least one case, the statement appears to have made a significant difference. According to a source close to the production, Pixar’s next feature film, “Lightyear” — starring Chris Evans as the putative real-life inspiration for the “Toy Story” character Buzz Lightyear — does feature a significant female character, Hawthorne (voiced by Uzo Aduba), who is in a meaningful relationship with another woman. While the fact of that relationship was never in question at the studio, a kiss between the characters had been cut from the film. Following the uproar surrounding the Pixar employees’ statement and Disney CEO Bob Chapek’s handling of the “Don’t Say Gay” bill, however, the kiss was reinstated into the movie last week.

The decision marks a possible major turning point for LGBTQ representation not just in Pixar films, but in feature animation in general, which has remained steadfastly circumspect about depicting same-sex affection in any meaningful light.

To be sure, there are several examples of forthright LGBTQ representation in feature animation created for an adult audience, including in 1999’s “South Park: Bigger, Longer & Uncut,” 2007’s “Persepolis,” 2016’s “Sausage Party,” and 2021’s “Flee.” But in a G or PG rated animated movie, the pervasive approach has been to tell, not show — and only barely at that. Arguably the most high-profile LGBTQ character in an animated studio feature to date — Katie (Abbi Jacobson), the teenage lead of “The Mitchells vs. the Machines,” produced by Sony Pictures Animation and released by Netflix — is the exception that proves the rule: This explicit fact of Katie’s identity is only fully revealed in the final moments of the film when her mother makes a passing reference to her girlfriend. A turning point in animation, they say? Here’s the problem: it’s one thing to make cartoons with homosexuality emphasized. It’s another to market them almost squarely to children, in contrast to how Japan does it, which is more to adults. And if there’s any laughable mistake Disney’s made, it’s refusing to market a lot of this stuff under say, their Touchstone Studios banner, which was founded in the mid-80s for just the purpose of marketing movies that wouldn’t have been ideal under the standard Disney banner.

The inability of these clowns to decide how they want to market animation, or build up an actual market for older audiences, is stupefying. Ironically, they did once come close, when under the Miramax banner, they were willing to distribute several of Hayao Miyazaki’s movies, if you consider the noticeably jarringly violent moments in Princess Mononoke. I do have a feeling, however, that depending on the content of his films today, they’d throw Miyazaki under the bus and reject his resume, in contrast to before. As for Netflix producing such propaganda, it’s hardly a surprise. Their ultra-leftist wokeness has been notorious for some time. Lightyear’s not the only animated cartoon they have in the works that’s got this propaganda marketed for children, instead of marketing it for adults. According to Business Insider, they also have an adaptation of a graphic novel titled Nimona in their vaults, so far still in limbo because the affiliated studio, Blue Sky, was shut down last year:

Blue Sky Studios, the animation studio behind the “Ice Age” series, was deep in development on its movie “Nimona,” based on the graphic novel of the same name by ND Stevenson, when the studio was shut down in February 2021 after 34 years.

Disney had inherited Blue Sky in its 2019 acquisition of the Fox film studio and other assets. Two years into the merger, Disney shuttered Blue Sky, effectively scrapping “Nimona” ahead of a planned January 2022 release.

The movie, Blue Sky staffers told Insider last year, centered on a gender non-conforming main character and featured LGBTQ+ themes rarely seen in animated movies. But some staffers said more recently that some of the concepts faced pushback from Disney. […]

“Nimona” takes place in a futuristic medieval setting and follows a young shape shifter who teams up with a knight to take down a corrupt government. The same-sex kiss in the movie, the former staffers said, would have been between Ballister Blackheart and Ambrosius Goldenloin, who have a romantic relationship in the graphic novel.

“We need more queer stories, but we also need to call out how nefarious it is when you don’t tell queer stories,” one of the former staffers told Insider. “When the biggest entertainment company in the world creates content for children and systematically censors queer content, they are pushing queer children to dark places.”

Straight from the mouths of people who’re pushing children down a dark path, and clearly uninterested in building up an audience for adults, as noted before. It’s honestly strange why Disney would want to buy another company, only to shut it down and get rid of almost everything in store. If they didn’t want the material, what’s the point in buying them out? Or, why did the owners – mainly Fox – want to sell? It goes without saying the writers seem oblivious to Japanese animation, which has focused on LGBT themes for many years, but in contrast to US animation, as noted at times before, they market to adults. In addition to the above, the awful Gizmodo told where it all originated from:

Nimona was originally published as a webcomic by ND Stevenson, a queer, transgender writer. He began writing it in 2012, while still a student at MICA, and it was submitted as his final thesis. The fantasy comic’s titular character, Nimona, is a shape-shifter who follows around a knight and attempts to bring down a corrupt institution. The comic was acquired by Harper Teen and published as a graphic novel, and proceeded to win an Eisner award in 2016. Nimona features a queer and gender non-conforming cast, and has roots in Stevenson’s own experiences. Nimona herself is considered gender non-conforming. Note that, if Blue Sky was a Fox affiliate, it’s a sign they were already circling the moral drain by the time Disney bought out much of their assets. This is just gross. In addition to the above, the Federalist says the recently released Turning Red also builds on insulting stereotypes towards women/girls:

Disney executives greenlit a half-baked explicit allegory about the female menstrual cycle and the difficulties of puberty. Think of a much less subtle version of “Teen Wolf,” but about a girl who turns into a giant red panda. An incompetent film that inflates old sexist beliefs while not even getting its cool fantasy premise right, it’s like watching a Tumblr cartoon on amphetamines. […]

What is here is confusing and unintentionally offensive. In the film, puberty means Mei getting worse grades, catcalling boys at school, failing on hygiene, and being a much messier and less put-together person. With so many mixed metaphors, the film inadvertently says women cannot be expected to be competent and that domestic abuse should be tolerated. Yikes.

What’s really stunning here though, is that the film’s staff appears to be mainly female:

Perhaps what’s most painful about “Turning Red” is that could have been an all-time Pixar great if only director Domee Shi’s all-female team would have tolerated the infamous Pixar boil-down. That is often the problem with diversity ventures — not that the content they are proposing to make is terrible, but that the fear of offending woke creators means production leaders cannot say “no” to bad ideas. […]

Alas, movies are not video games. They do not get patches or updates. “Turning Red” is a terrible film and an apocalyptic sign of the state of Pixar. There is no good reason to see this movie. It is offensive in its suppositions about the weakness of women, makes me very uncomfortable with its ignorance of the dangers of domestic abuse, as the film delights in its drunken self-importance.

Is this so? A film potentially insulting to women, yet the much of the production staff are themselves? What a head-shaker. If it proves something, it’s that women can develop a movie demeaning to the fairer sex, and who in the MSM is going to take serious issue, so long as it enables them to perpetuate an agenda?

This isn’t the only segment of Disney-owned products that’s becoming problematic. According to another, equally dishonest Variety article, Oscar Isaac, the star of the new Moon Knight adaptation, is going out of his way to join Disney in opposing the Florida child protection bill:

“It’s an absolutely ridiculous law,” Isaac continued, speaking specifically about the “Don’t Say Gay” law that passed in Florida that prohibits instruction regarding gender identity and sexual orientation. “It’s insane. It’s insanity. And I hope that Disney as a company comes out as forcefully as possible against this idea. It’s astounding that it even exists in this country.”

I asked #MoonKnight star Oscar Isaac if he had a comment about the Disney employee protest over the “Don’t Say Gay” bill today. Boy howdy, did he. https://t.co/pqyWy21r4n pic.twitter.com/JsO1NUtbdx

If I weren’t as discouraged as I am about watching live action comics adaptations today, I most definitely would be after reading this asphyxiating lip service of his to a cause that hurts children. Breitbart notes:

Variety‘s article falsely referred to the legislation as the “Don’t Say Gay” bill, neglecting to mention the text makes no reference to gayness. The trade publication also misleadingly claimed the bill would prohibit “instruction regarding gender identity and sexual orientation.”

In fact, the restriction only applies to kids in kindergarten through third grade.

Yup, Variety is indeed trash. Aside from that, I will not be watching the Moon Knight TV program on Disney Plus after what Isaac’s done, which is disgraceful. I own some of the original Moon Knight comics in trade paperbacks (the Epic Collections), and I’d rather read through those, which are far more engaging. Why, what if Isaac and company have plans to exploit their new TV show for pushing radical leftist agendas? Regardless, he doesn’t deserve an audience after this embarrassment. Nor do the new cartoons Disney’s producing, with the dreadful way they’re going.