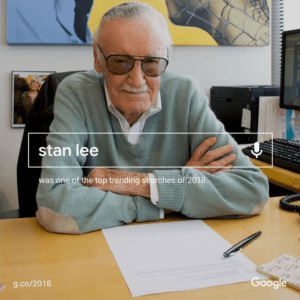 Pirates and Princesses said a few weeks ago that the Disney studio is using a recording with the late Stan Lee from a year before his death for the sake of promoting their 4th stage of movie adaptations, such as The Eternals, which look to be clogged with divisive political elements:

The late Stan Lee is narrating the trailer teasing Phase 4 of the MCU and The Eternals, but few people understand just where the (heavily edited) audio clip came from.

The voiceover is from a cell phone video Stan Lee made in 2017 (no doubt at the urging of Marvel execs or editors) that seemingly chastises some comic book fans for their intolerance and bigotry.

And by that point, Lee was an old man who couldn’t fully understand what was going on, which makes any influence by ways of the company staff all the more revolting. Taking advantage of an old guy whose mental state had weakened terribly is a very low act. This is a company now run by people with no respect for Lee’s hard work, which pretty much explains why they’d take advantage of him. And all at a time when their fortunes were really in the gutter, no thanks to now ousted EIC Axel Alonso’s social justice pandering.

It’s a great speech, but it’s highly unlikely that the then 93-year-old Stan Lee was keeping up with Twitter drama and fully understood what was going on.

Some comics fans believed Marvel execs were weaponizing Stan to attack the fans who felt they were defending his (and other creators’) legacies, while others thought he was referencing the then-recent Vegas shootings (although the FBI found there was no indication those were racially motivated.)

Well unfortunately, the executives were exploiting Stan to suit their selfish little agendas and politics, confident he wouldn’t comprehend anything. Otherwise, they’d leave him alone, and luckily did when C.B Cebulski succeeded Alonso. Not that it’s salvaged their wilting fortunes, of course. It was shameful how they took advantage of Stan when he was still alive, and now, they’re exploiting him long after he’s passed on, to promote what some of fandom worries rightfully will end up being a shift into divisive political ideologies:

…some fans are worried that the next Phase of the Marvel Cinematic Universe will be overly political, and point to things that directors have said about diversity and inclusion as evidence that Phase 4 will be too “woke.”

Disney seems to be doubling down on political stances in the theme parks and with Star Wars, so it’s pretty easy to see them doing the same with Marvel going forward.

So the query is whether this’ll lead to a variation on the Alonso period on the silver screen. And indeed, it does look like that could be the case. Not that I really care by this point, since I largely stopped watching comic adaptations after realizing they were taking priority in every way over the comics proper, which were abandoned to ideologues. Honestly, I don’t think there was much point even adapting them in the first place, since live action seems to be far more important to these film fools than animation, though I realize cartoons are no less vulnerable to politics than live action.

What I do know is that comicdom and its movie counterparts are going the way of the rest of Hollywood, to political land, and it’s not healthy. Nor is the way Marvel studios are using Lee’s statements for the sake of pushing divisive agendas on the audience. The best way to protest is to avoid whatever they produce going forward and save money. Seriously, the time has come to prove we can vote with our wallets by avoiding what they have in store.