Undoubtedly you’ve seen SJWs repeatedly make the “tiny vocal minority” claim.  They like to dismiss opinions they don’t like as coming from a “minority” while simultaneously telling us all how important minorities are.  They literally have no idea what their ideology even stands for.  Such is the case of Brandon Bird, writer for Cinemast, who decided to parrot it once more as a kind of affirmation. 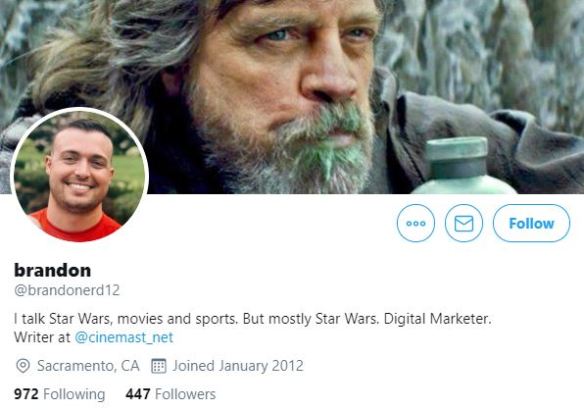 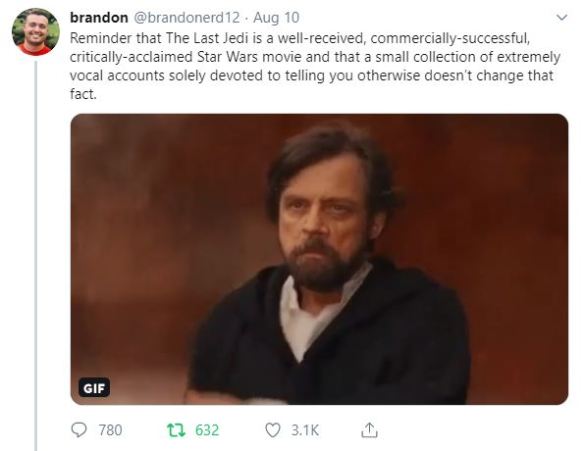 And no doubt he’s convinced himself of just that.

But there’s only one problem with the “tiny vocal minority” narrative.  It’s been discredited by settled science.

George McIntire at Thinkful.com writes a piece entitled, Star Wars: The Audience Turns to the Dark Side.  In it he writes:

As demonstrated in the scatter plot above, the majority of Star Wars related tweets contain strong and ominous language. Polarity score is a metric used by data scientists to show to what degree text is negative or positive. Subjectivity score is another data science metric that measures to what degree text is objective or subjective. Nearly three-quarters of Star Wars related tweets score negative (polarity score <0), two-thirds of tweets have a polarity score of less than -0.3, and the median polarity score for all tweets is a staggering -0.55.

Dire feelings towards the film extended to the film’s three most popular characters also. Tweets discussing Kylo Ren, Rey, and Luke Skywalker (the three most mentioned characters in our data set) all generated negative polarity scores.

The histogram above shows the distribution of positive and negative tweets concerning Rey, the mysterious heroine from The Force Awakens. An overwhelming majority were negative. While this might reignite memories of the racist and sexist #BoycottStarWars movement, we can partially attribute the negativity to the rumors swirling of Rey’s flirtations with the Dark Side. As @FelicityRidley’s tweet shows, some folks are concerned about this potential plot twist.

And that’s not all.  A writer by the name of Corinium wrote at coriniumintelligence.com:

Stretch Out With Your Data Feelings: How Disney Utilized Sentiment Analysis

In the lead up to the release of both “Star Wars: The Force Awakens” and “Star Wars: The Last Jedi in 2015 and 2017 respectively, sentimental analysis was deployed which looked at the positive impact of the release of both films. It wasn’t enough to look at how much money both films took at the box office globally, Disney wanted to get a clear insight into how fans of the franchise felt about the films. By analyzing tweets about each film release using a sentiment analysis score of -1 and 1 with -1 being a tweet from someone who hated the films and 1 being a tweet from someone who thought the films were the best things ever, clear insights about how fans felt about them were found.

Hashtags such as #StarWarsAwful started trending above the official hashtag for the film, #TheLastJedi, complete with an emoji of one of the most iconic characters from the film, the robot BB-8. Through the deployment of sentiment analysis studio insiders were able to see first-hand what fans of the film thought about the return of long-standing character Luke Skywalker, played by the actor Mark Hamill. It is thought that these insights will play a huge part in the direction and shape of how the ninth film in the Star Wars franchise will pan out script wise when it is released in December 2019.

So SJWs like Brandon are going to have a hard time coming to terms with this settled science.  It may take them a decade before they’re able to process the information.

Now, readers of this blog will no doubt remember Morten Bay’s ridiculous research paper, which purportedly proved that Russian Bots were responsible for a majority of Last Jedi criticism.  Morten Bay was later discovered to have curious connections with Disney.  They even tried to blame Kelly Marie Tran’s “harassers” on Russian Bots at one point.

It’s likely that this Disney-ordered Sentiment Analysis will go just as ignored as the scholarly article that discredited the Black Stormtrooper Controversy.  But if Disney/Lucasfilm representatives are forced to acknowledge it, then they’ll likely default to the “it’s a bot thing” narrative in order to maintain their “tiny vocal minority” delusion.

Big thanks to @Dataracer117 for the tip.